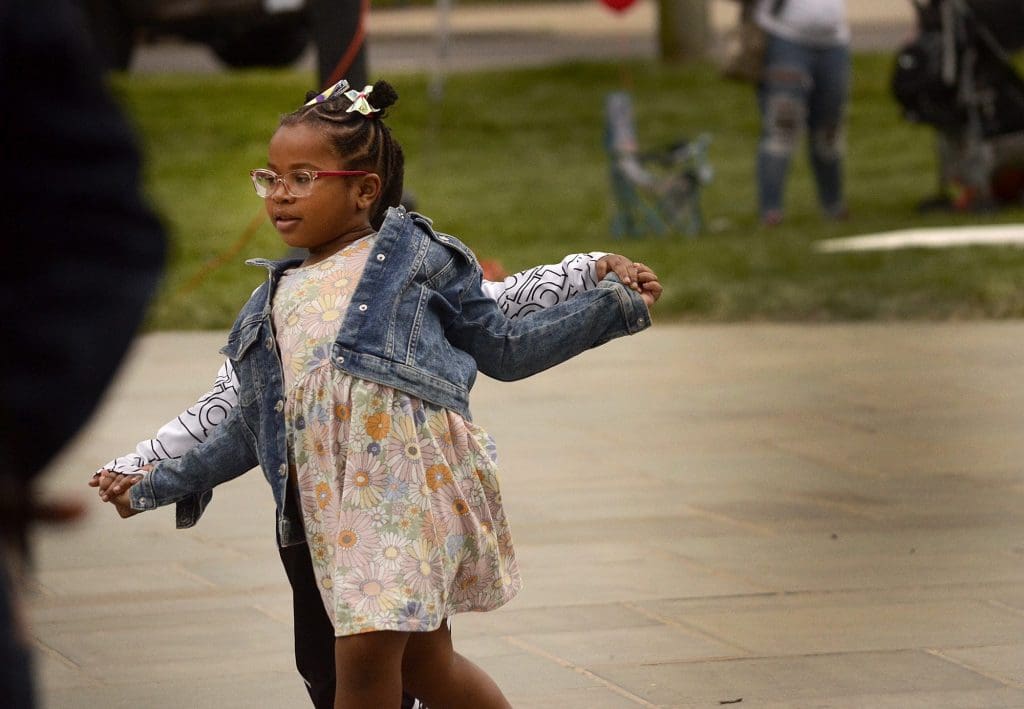 Ava Rose, 6, dances with her brother, Saturday on the town green. (Nancy Chapman)

“On June 19, 1865, federal troops arrived in Galveston, Texas to take control of the state and ensure that all enslaved people be freed. This, however was two and a half years after the Emancipation Proclamation went into effect January, 1863. This day, the oldest known celebration commemorating the end of slavery in the United States, has become a day for African Americans to celebrate not only their freedom, but their history, culture and achievements,” a news release from the Governor’s Office explained. 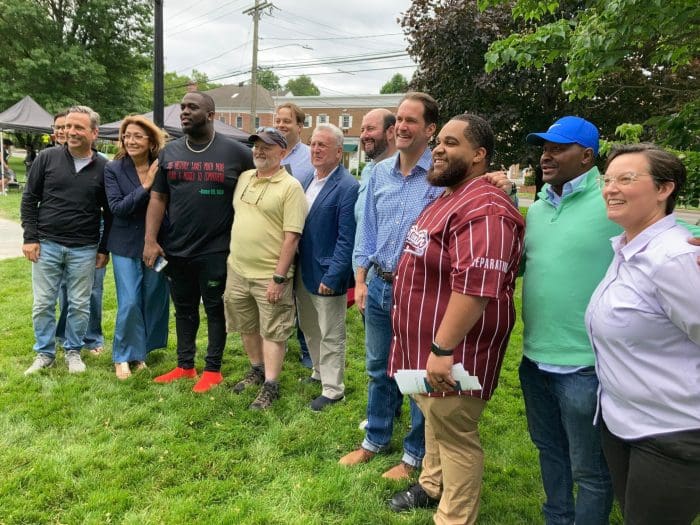 On May 27, Gov. Ned Lamont signed Public Act 22-128 into law, making Juneteenth a state holiday as of Oct. 1. The legislation was approved with the near-unanimous support of lawmakers in the General Assembly, by a vote of 148 to 1 in the House of Representatives and 35 to 1 in the Senate. 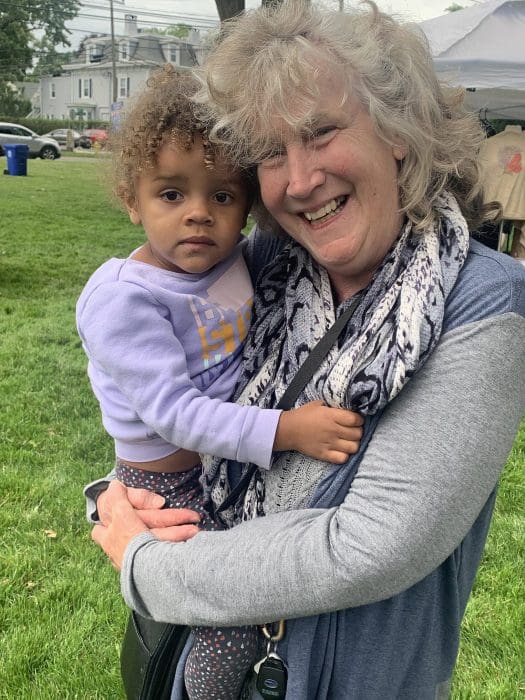 “Juneteenth marks an important day in our nation that for far too long has gone under-recognized and has not been truly appreciated to the extent that it should be as a major part of United States history,” Lamont said in a news release. “While some elected officials in other states are working to block efforts to teach the true history of our nation, it fills me with pride that here in Connecticut we are embracing that history and working to educate everyone about how our nation was built and the significance of what this day means.”

The effective date of the legislation is Oct. 1, meaning that next year’s Juneteenth Independence Day will be the first legally recognized as a state holiday. 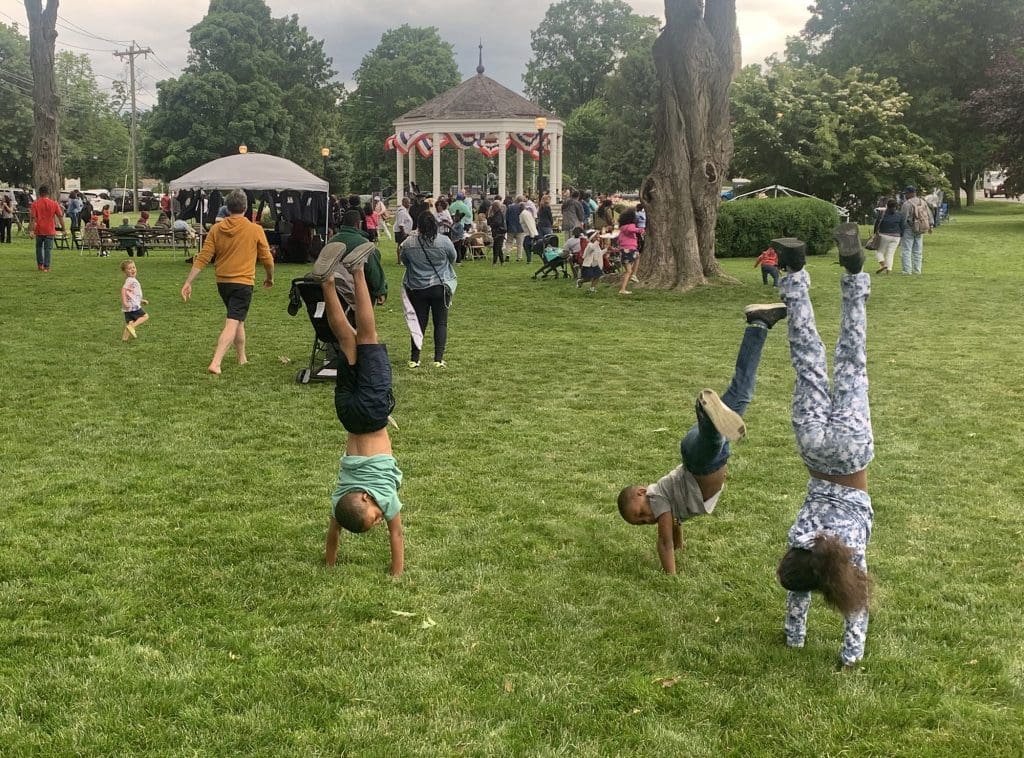 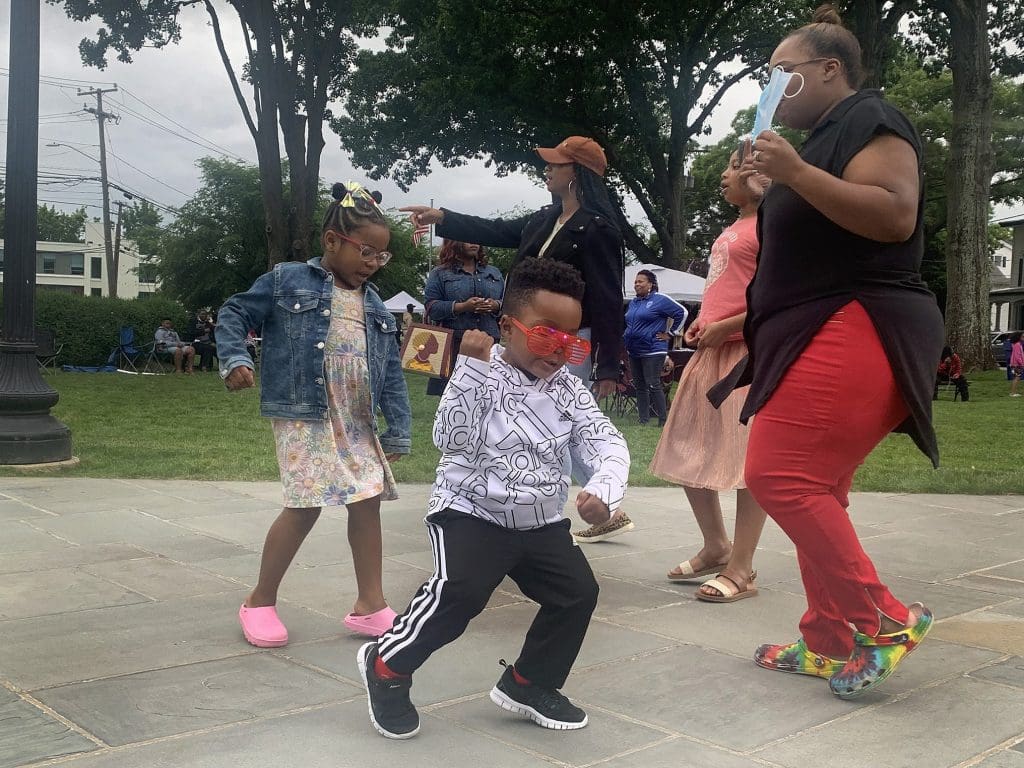 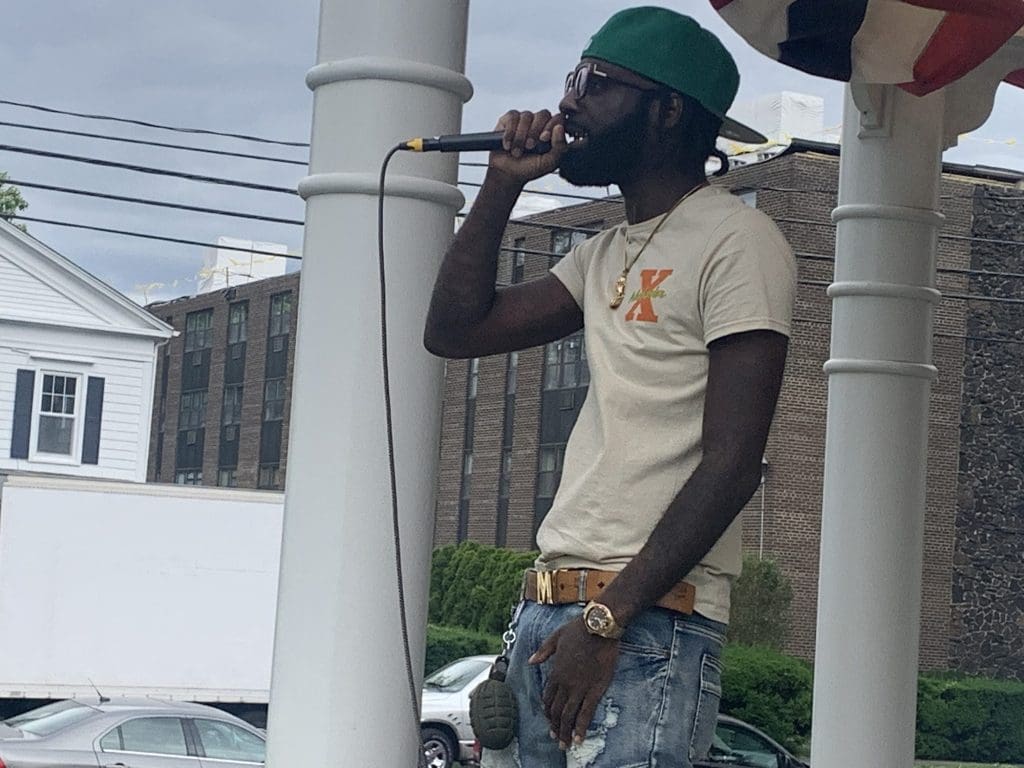 Joe Thompson (aka Joe Grit$), speaking and rapping, Saturday on the town green. Grit$, a Bridgeport resident, grew up in Norwalk. (John Levin) 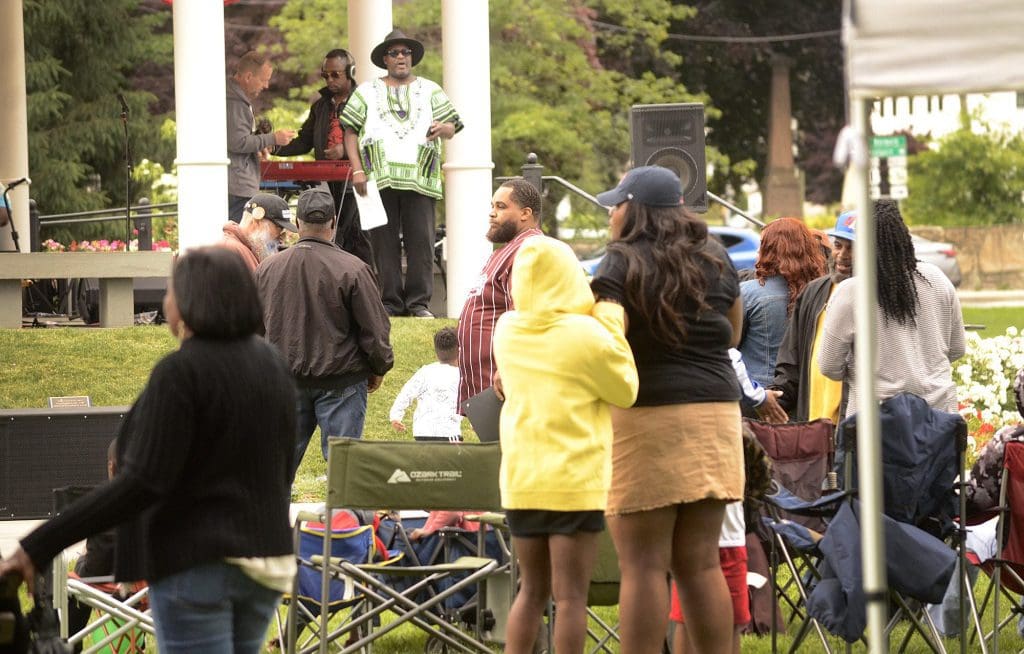 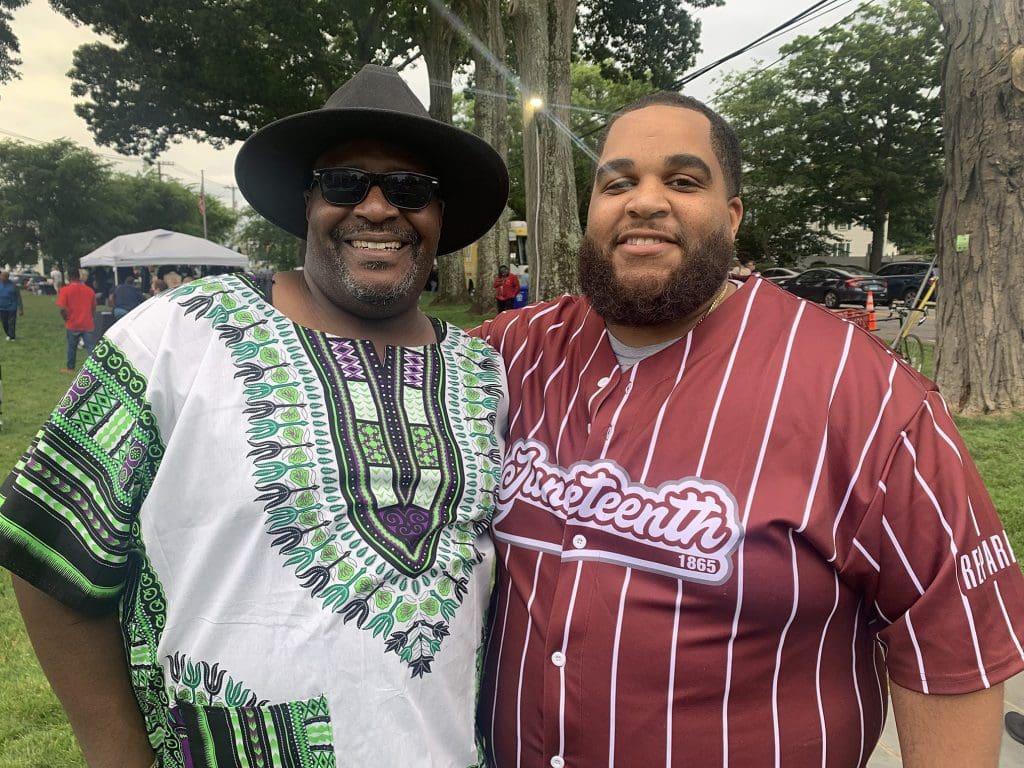 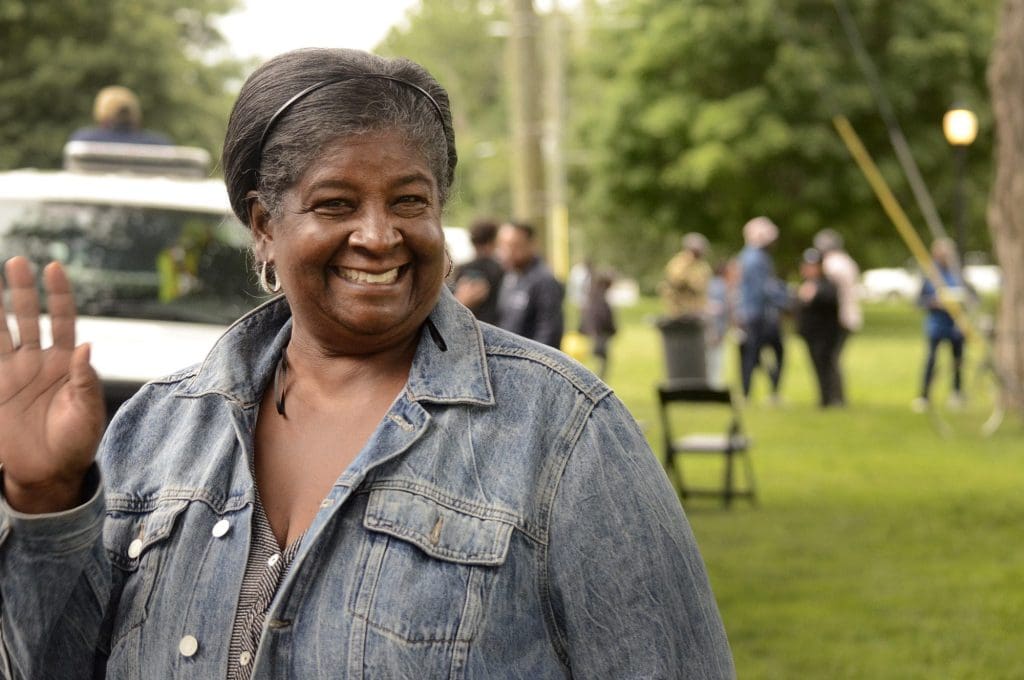 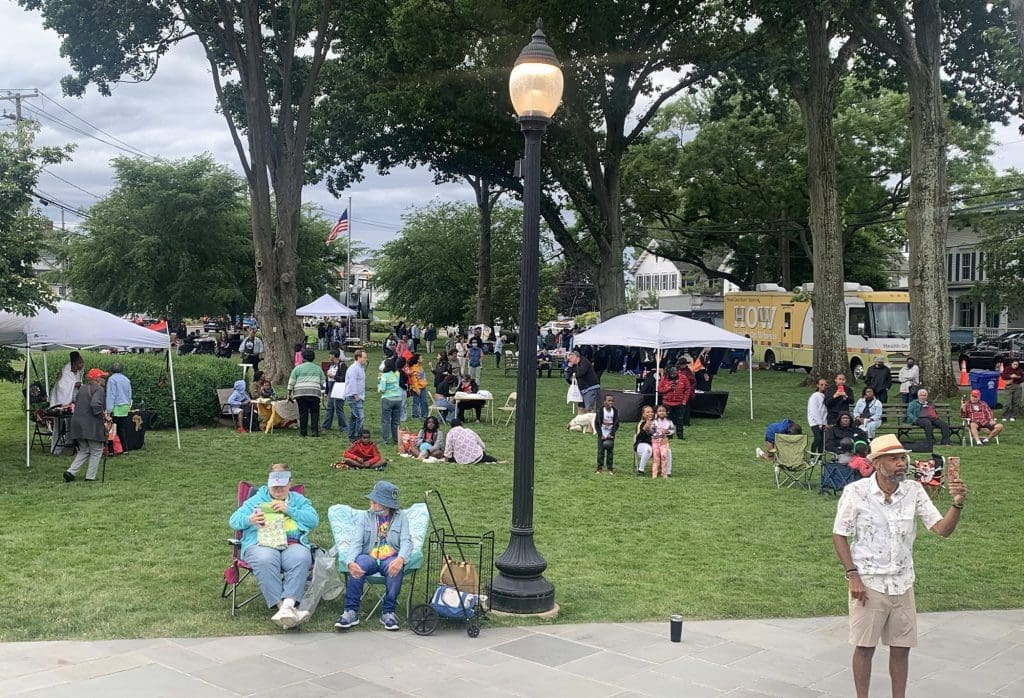 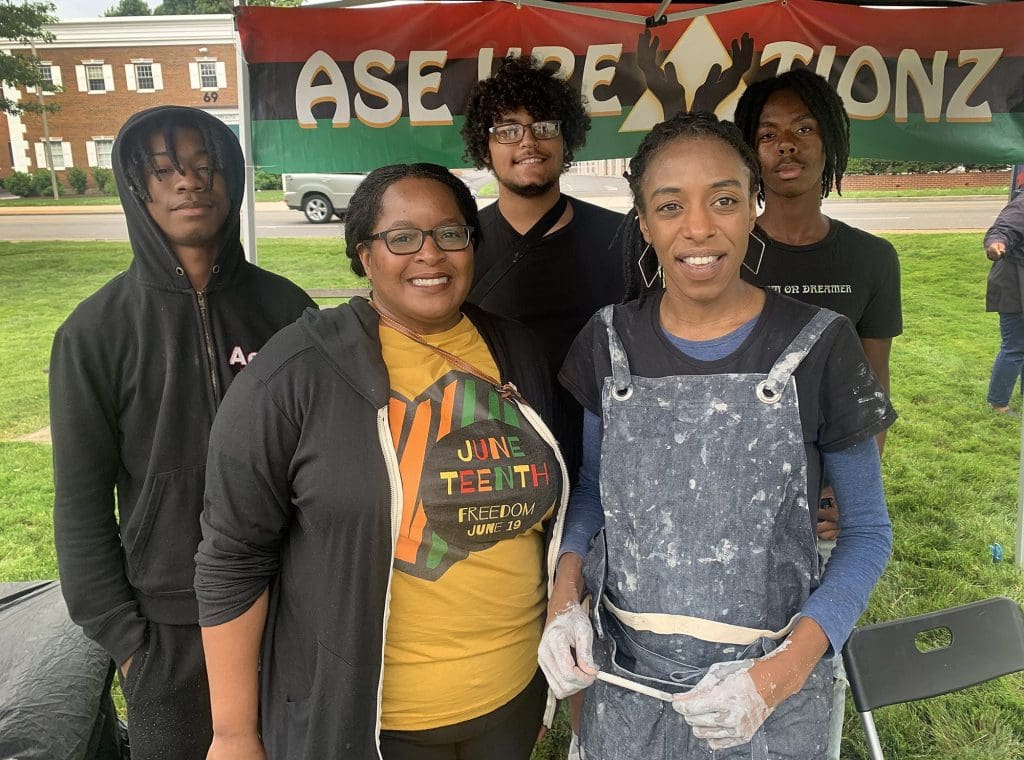 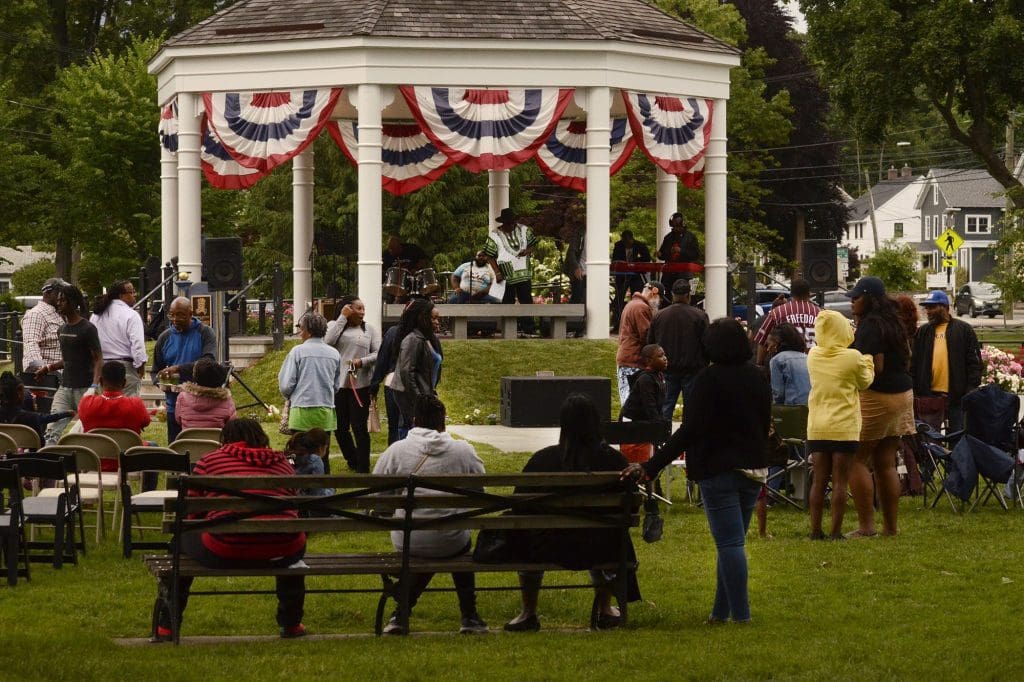 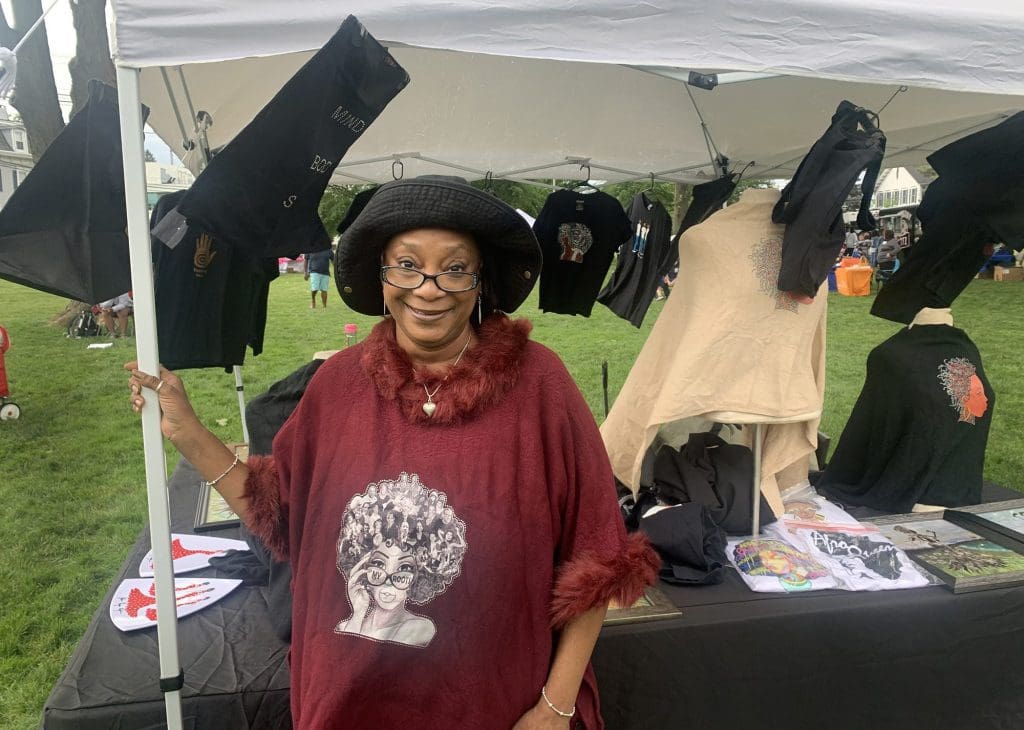 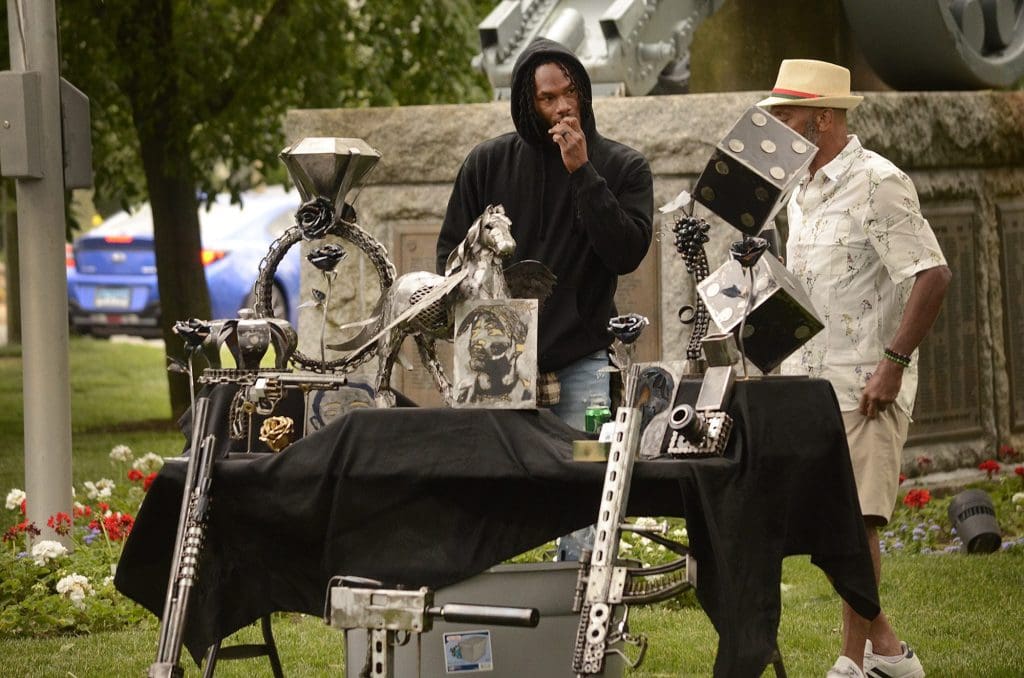 Byron Troy of Steeling Roses shows off his art, Saturday on the town green. (Nancy Chapman) 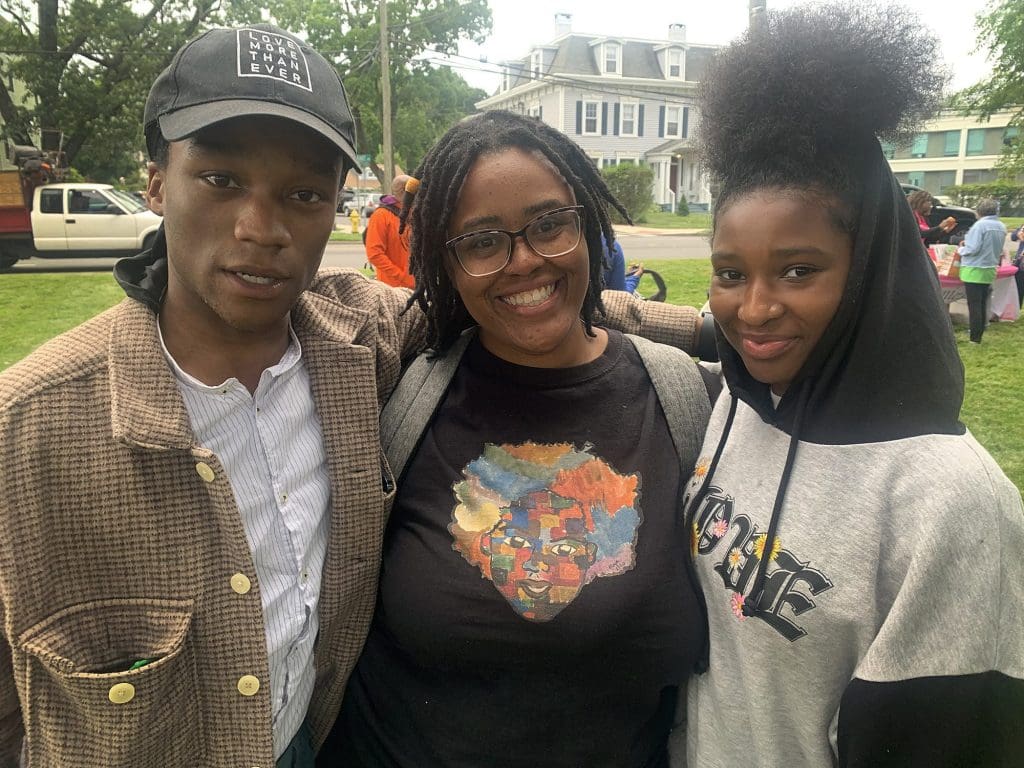 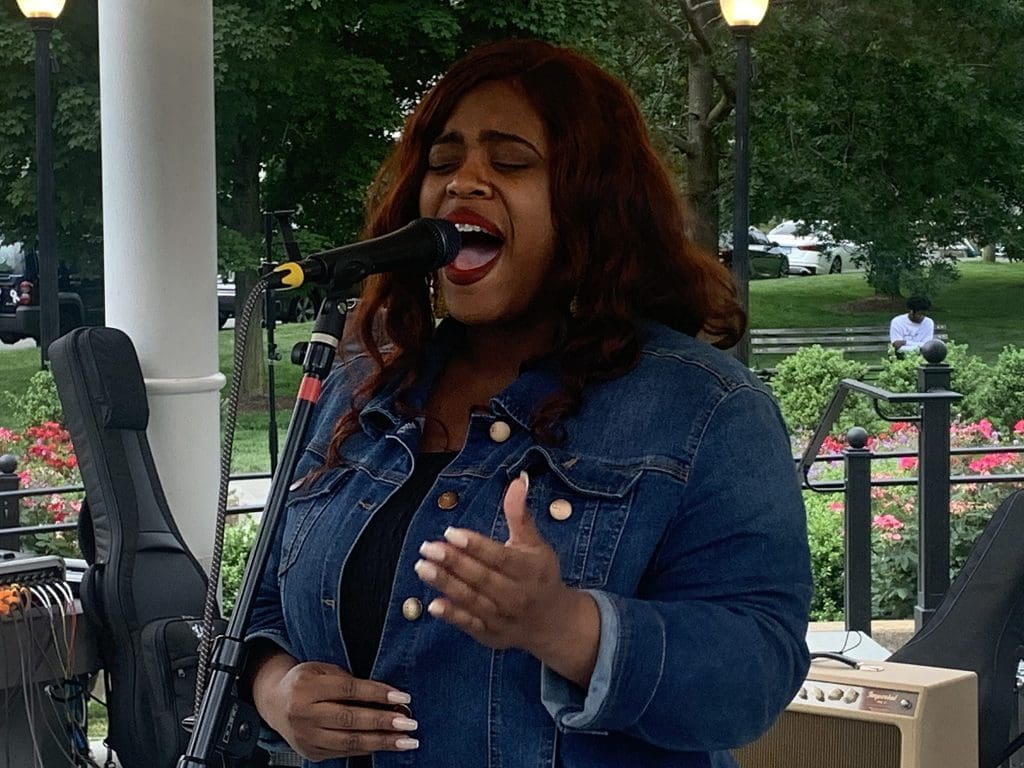 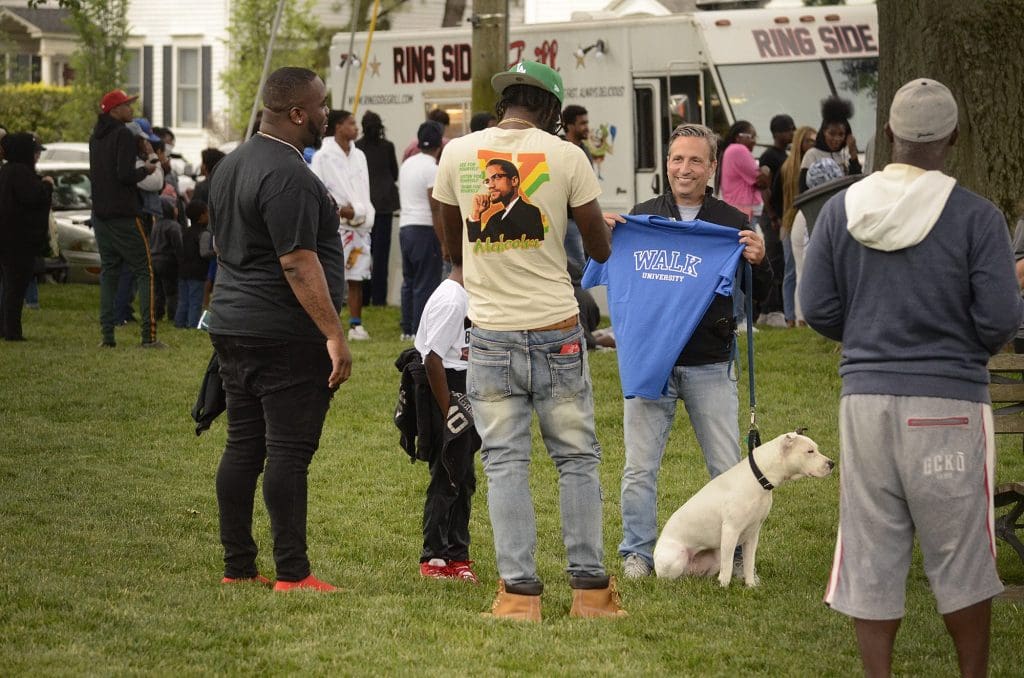 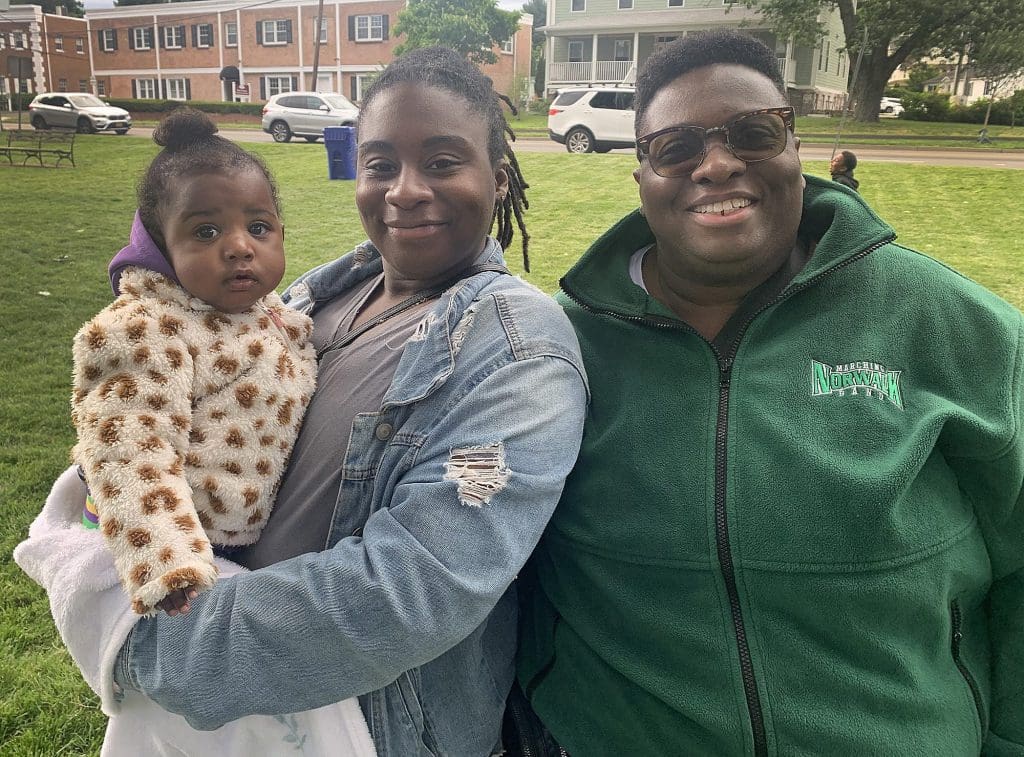 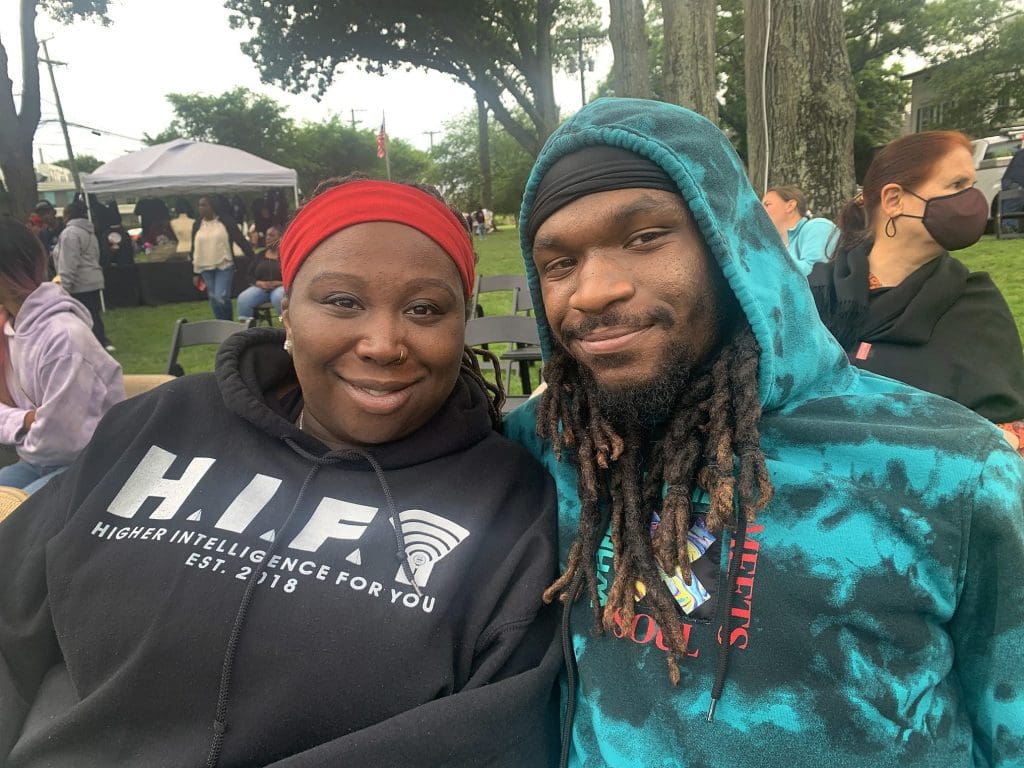 Curious there’s no national holiday honoring the approximately 400,000 Union troops who gave their lives to defeat the slave owning Confederacy from seceding. Without their sacrifices slavery would have continued in the Confederacy for generations.

Many New England towns have memorials to those fallen in the Civil War listing the names of those who didn’t return. As well as memorials to those in the War of Independence. CT has hundreds of memorials. Proposals for a War Memorial in Norwalk have never gathered up sufficient steam.

It was a good celebration I enjoyed it 👍🏼and hopefully it’s more than just a photo op for the Democratic mafia party🥵 Whose history includes slavery, Jim crow and the KKK!!!👎🏽remember it’s the Republicans Party that freed the slaves🙏🏼💪🏼 and also wants to protect the unborn black children 🐣🇺🇸 but we still need a liberty party💪🏼🇺🇸✝️ back to the Bible and the constitution !😇🙏🏼

@peterberman. We already have that. It’s called Memorial Day. It was implemented a few years after the Civil War to honor Civil War soldiers who didn’t come home. It was an initiative of the same GAR that erected the statue in Norwalk’s Riverside Cemetery. As far as I know, the Norwalk Historical Society is still in the process of restoring it. I bet they’d love to have you phone them up and help out with the costs of something which you’re so passionate about. Lead the charge!

In spite of the cold weather the community showed up and given the previous commenters digs at the Democratic Party I was pleased to see Sen Duff and other Democratic members of our Common Council black and white in attendance. Where were local Republicans?
It is factual to say that in the 1860’s the Democratic party was racist and Abe Lincoln and GRant were great liberators of the slaves. More recently from the 1960’s on leadership on civil rights has primarily been fostered by the Democratic Party including the landmark Civil Rights Act, anti red lining regulations, founding of community development financial institutions. In recent elections, the Democrats have supported people of color to participate at every level of government including Congress, the US senate and our current Vice President for example. While Republicans support black people who support tax cuts for the rich and other standard Republican policies they have tried to limit efforts to make it easier for the poor, working class, and middle class to register and vote because black folks and Hispanics tend to vote Democratic.

As to abortion rights, all women deserve to be able to make the choice with their doctor about when and whether to have a child and not have the political process ban it. Women have had illegal “back room” abortions for years when anti abortion activists dominated government. Now after years of women’s rights being honored, the Republicans who dominate the Supreme Court because of Trump’s appointments, are trying to take women’s rights away. Let’s work to make sure the Republicans don’t win in November because their approach to everything is to cut funding for struggling communities and try to impose their views on people who differ from them.

Wish you would publish equal number of pictures for every Holiday Not sure why this Holiday gets 15th. It will be interesting to see what is published for JULY 4TH.!!!

Reportedly there are 140 stand alone Civil War Memorials in Connecticut. Typically they’re found in prominent places/streets in our Towns and Cities. Some list the names of those who did not return.

Efforts over the years to construct a War Memorial in Norwalk in a major part of our City such as Veterans Park have not gained traction. CT’s major cities are well endowed with War Memorials.

Please save your fake outrage for your own personal echo chamber.

This holiday exists only to serve a political agenda, the United States already has freedom of opportunity but the left wants us convinced that black people are still living in slavery. Shameful. Also a criminal like George Floyd inspiring this holiday is just as ridiculous.