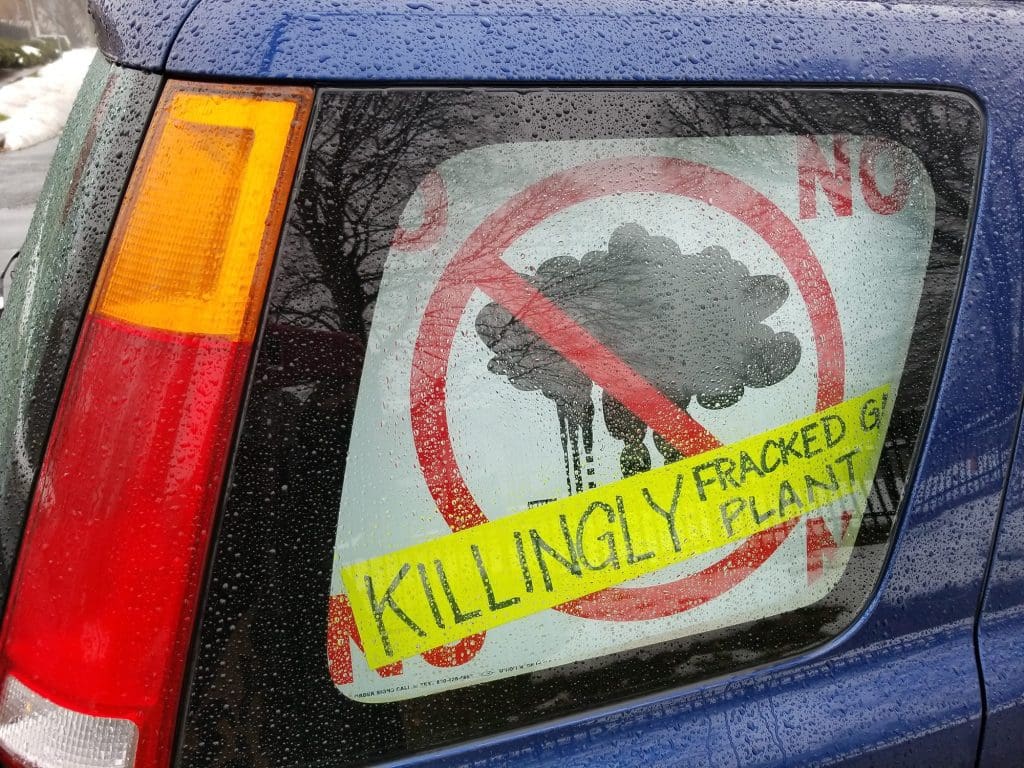 Connecticut climate activists caravanned from the State Capitol to the Governor’s mansion Saturday to call on Gov. Ned Lamont to “stop the Killingly plant from beginning construction before it starts,” Diane Keefe said.

Keefe, a Norwalk Democratic Town Committee member was among them. “Natural gas is over 90% methane which is a greenhouse gas with 80x the warming effect of carbon. The energy from Killingly is planned for export to other New England states. The environmental activists believe we need to redirect investments to energy efficiency and conservation, solar, wind and battery storage,” she said. 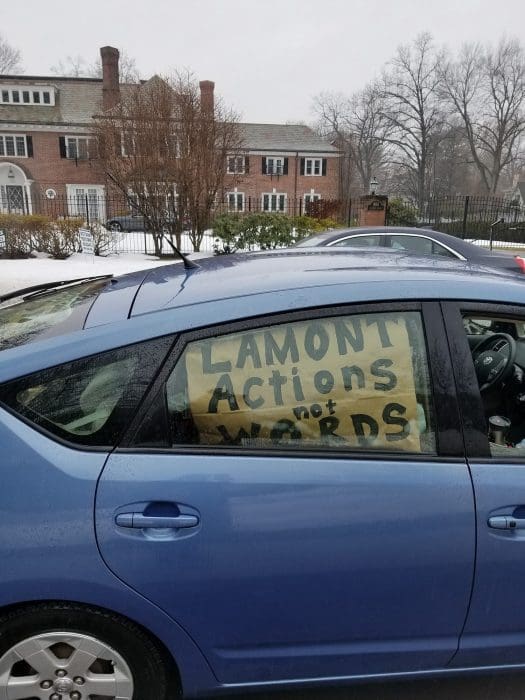 The caravan also stopped at Connecticut Department of Energy and Environmental Protection (DEEP) headquarters, she said.  Activists held a virtual rally for those who didn’t want to brave the rain.

Lamont recently said he doesn’t want to build the proposed Killingly Energy Center, a 650-megawatt natural gas power plant. Those who oppose it have argued it flies in the face of Lamont’s executive order for a 100% zero-carbon electric sector by 2040, it does not support his broader commitment to fighting climate change, and it just isn’t needed.

The governor hinted at slowing permitting and being able to “play some games there.” He also hinted that market forces may ultimately take over.

“I’m not positive you’re going to see Killingly built at all,” he said. 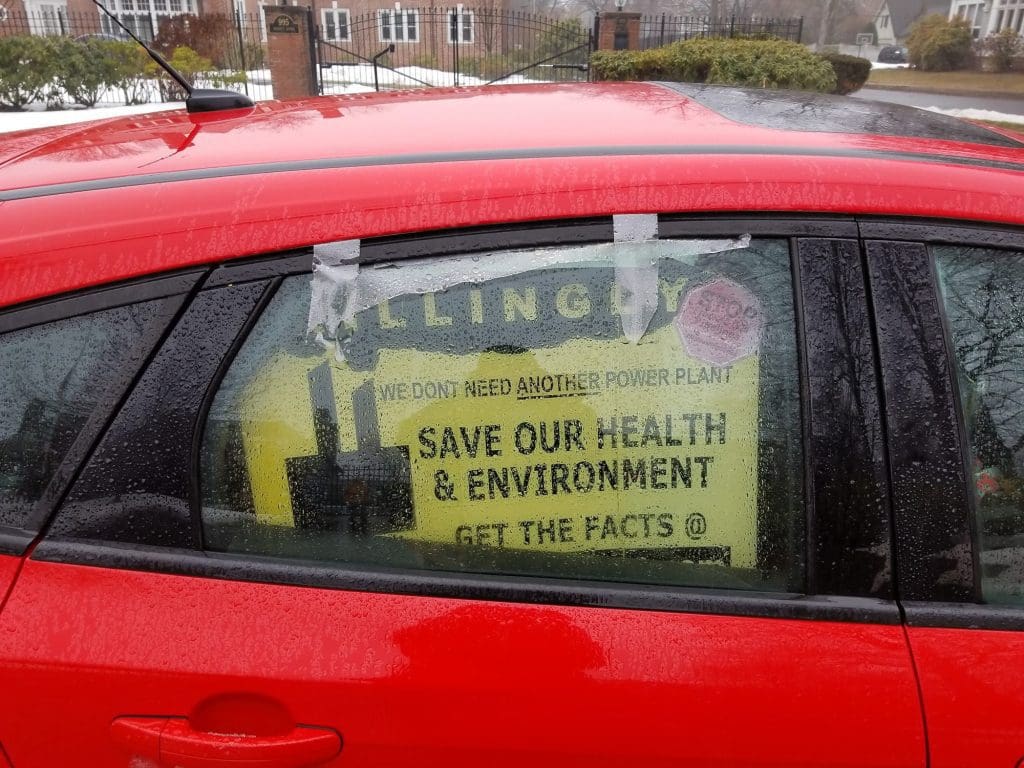 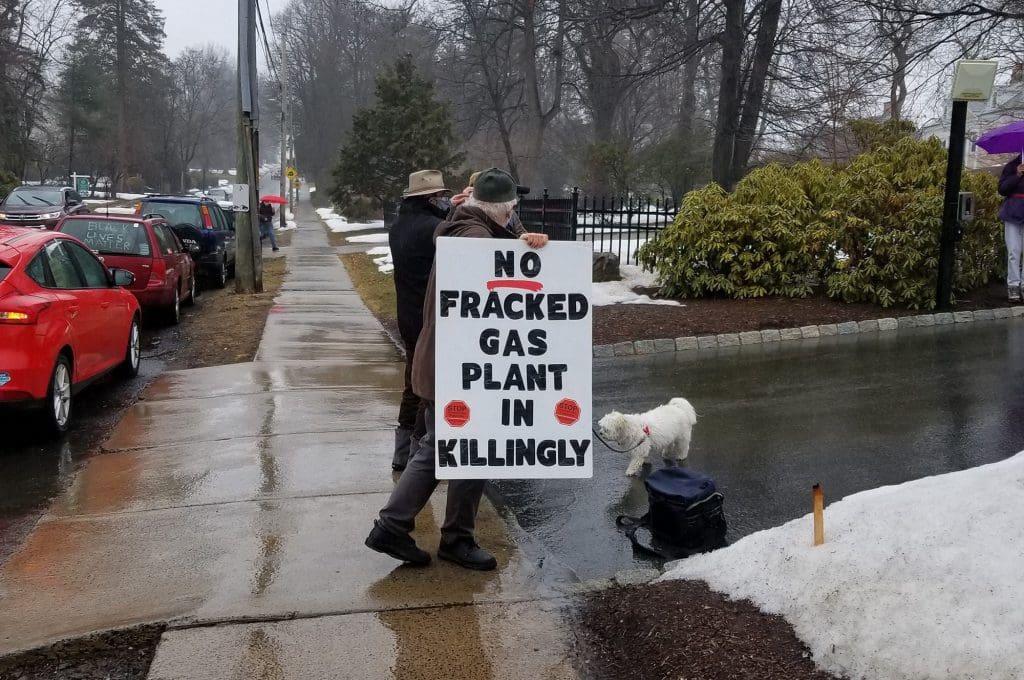 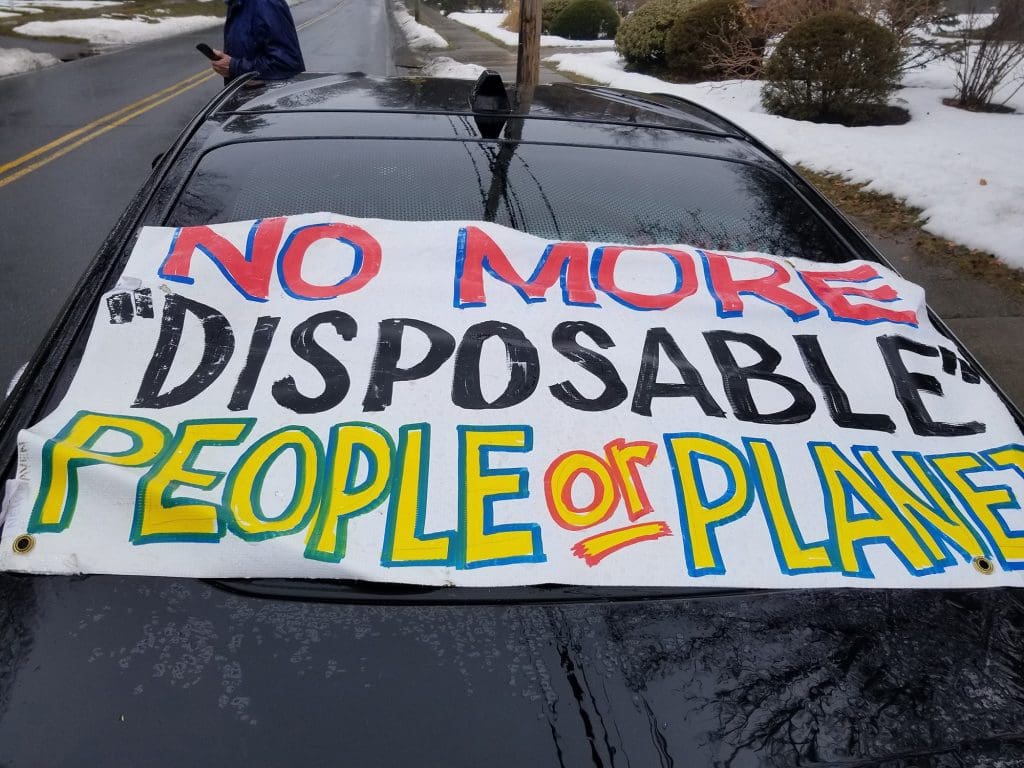 Is it a natural gas power generation plant that – utilising some undisclosed and hitherto unknown technology – is only capable of burning gas derived from a fracked gas well???

Or, more cynically and realistically, is it simply a natural gas power generation plant that its opponents have decided to marry with the loaded and loathed term “fracking” for purposes of inciting a negative emotional response? In other words, is the marriage of the terms “fracked” and “gas” just spin and marketing?

I will guess that the authors of the label “fracked gas plant” will defend the neologism saying that the greater amount of natural gas produced in this country (67% based on what I’ve read) is derived from fracked wells. But I’m sorry… I don’t believe that what some may view as “smart marketing” serves the environmental movement well since it can only serve to reinforce the impression that some may have of environmentalists as something other than fact or data driven. And I say that as a life-long, committed environmentalist.

For the record, I was outspoken more than two decades ago in my opposition to the “filthy five” coal power plants in CT and advocated for shutting them down. And as for the Killingly plant, I would unquestionably prefer a renewable energy source to a carbon-based one.

But with that said, I’d be extremely interested to learn more about what alternatives are being suggested by the plant’s opponents to meet what I assume to be real anticipated future power generation demands in CT. A wind turbine farm in Long island Sound? Nuclear? Hydro?

Can hardly wait for electric bills to double again in the next 2-3 years.

Larry, thank you for working to close the filthy five. I also supported that campaign. the last of the filthy five is scheduled to close this July. The impacts of climate have gotten worse so citizens must redouble our efforts to draw the public’s attention to the need for climate action.
Fracking is not marketing but rather a technical term for the technology responsible for most (if not all) of the natural gas that will be supplied to Killingly. Fracking is used to release natural gas from fissures in rock. Fracking created a fracked gas energy boom that dramatically increased domestic natural gas supply making some American energy companies rich but it also created water contamination and other environmental damage from fracking chemicals that communities will be dealing with for decades. The content of fracking liquids has been defined as a trade secret but highly toxic fluids were discovered associated with fracking operations in PA and elsewhere.

Like you, I used to think that natural gas was OK as a bridge fuel because every form of energy production produces some pollution. However, now that I have learned of its 86x more potent greenhouse effect over a 20 year time period, it is clear to me that we need to accelerate solar and wind development plus conservation for the next 20 years and avoid new natural gas plant construction whenever possible to prevent 1.5 degree global warming to comply with the Paris Climate agreement.
Connecticut is in the enviable position that we currently export energy to the regional grid so, if we don’t need the Killingly plant to meet our needs.

I hope more people will realize the important connection between methane (i.e.natural gas) and climate change and call on the Governor and our state legislators to take action this session against this substantial threat to the achievement of our climate goals. Now is the time to contact State Senators and General Assembly members to support SB 882, the Governor’s climate bill with an amendment that reads 100% renewable energy GENERATED in CT (not only supplied to CT customers as it’s currently written). The other aspects of SB882 are great.
The Governor’s transportation Climate Initiative should definitely be enthusiastically supported but the Killingly Energy center must never be built.

When these protesters start boycotting Chinese products which are made using cheap coal powered energy I’ll take them seriously. Until then I would prefer reading about how Connecticut is going to be able to compete for business in the future. .

Lamont is the man. Offshore wind farms are on the horizon, creating jobs along the way.

Larry: we don’t need to rely on destructive fracking to continue the GHG way of producing energy.

I didn’t suggest in the slightest way that fracking was “marketing”, but instead suggested that it was the marrying of the term “fracked” to “gas plant” that was a possible example of marketing or spin…Please reread my comments.

As for your point about the significantly greater impact of natural gas/methane/CH4 vs CO2 on global climate change, that is an absolutely indisputable fact. However, when methane is combusted, what’s produced is energy, CO2, water vapor and small amounts of nitrogen oxide. The significant and real risks of methane related to global climate change are associated with the escape of methane during its extraction and transport. My recollection is that, quite unfortunately, the last administration did everything within its power to reduce and eliminate the regulations that had been put in place during the Obama administration to control and limit escape of methane during a whole host of industrial processes, including methane extraction and transport. I’m hopeful that those regulations can now be revisited, thus making natural gas again a more acceptable bridge fuel for electricity generation.

James- As for offshore wind turbines in L.I Sound, for a whole host of reasons, I’m highly skeptical that we’ll see them anytime soon. The Sound is a relatively narrow body of water with expensive coastal real estate on both the NY and CT sides. As such, it will be difficult to place the turbines at a sufficient distance from either shoreline to mute the objections of coastal residents. (e.g. The 90 turbine wind farm that is going to be built by PSEG off of Cape May will be 16 miles from shore, and thus will look like “peach fuzz” on the horizon to an observer on the beach.). Additionally, I’m guessing that a whole host of other special interests would likely crawl out of the woodwork to oppose a wind farm, not the least of whom would be recreational and commercial boaters. But I hope I’m wrong.

Ss for nuclear, I would anticipate an even larger and louder outcry from an even more diverse group of opponents. But here again, I would hope that science and pragmatism would prevail over blind reflexive opposition.