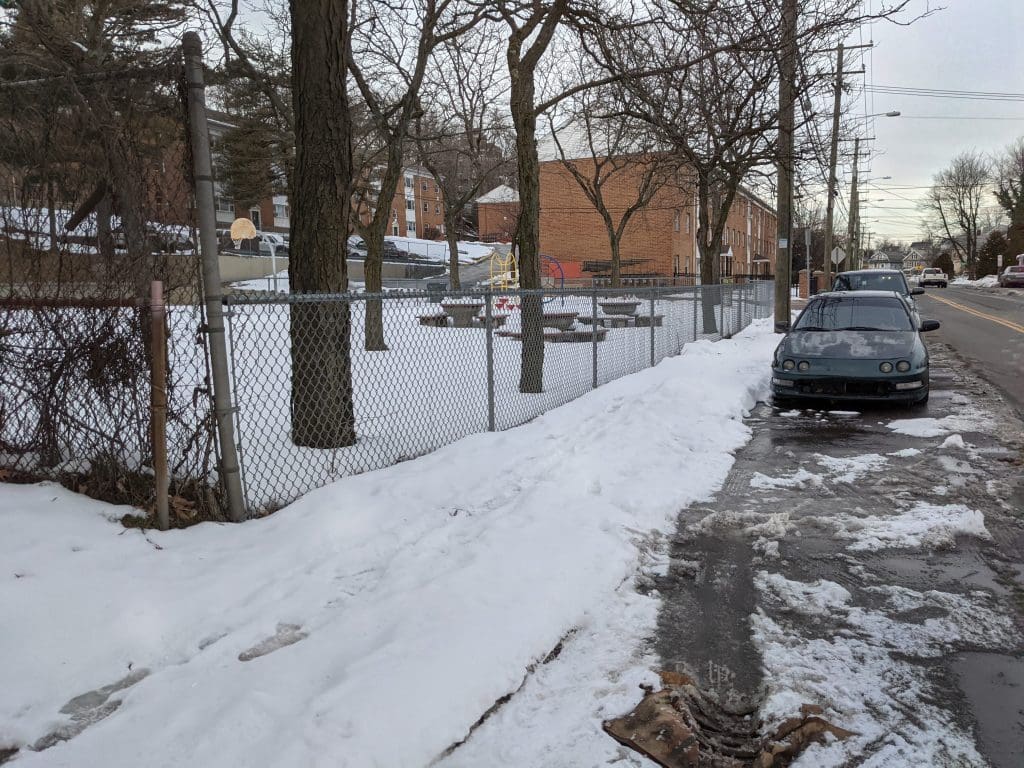 It must have been an oversight that this City park adjacent to the Norwalk Housing Authority’s Meadow Gardens housing project was left unplowed, Norwalk Communications Manager Josh Morgan said Thursday. “Staff will be heading out to make sure it is fully cleared.”

NORWALK, Conn. — A Norwalk ordinance requires property owners to clear their sidewalks of snow but as many pedestrians know, it’s not necessarily happening.

Here’s a set of photos of sidewalks left impassable after the Feb. 7-8 storm. According to Norwalk Communications Manager Josh Morgan, the ordinance’s enforcement was stepped up under the recent reorganization of top City administrative positions “to have a specific focus on neighborhoods.”

“There are now two full time positions part of a Neighborhood Improvement Team with Bill Ireland in the Building and Code Department. They report to Jessica Vonashek (Casey) as part of the overall Economic and Community Development Department,” Morgan wrote.

“We follow up on snow covered sidewalk complaints when we receive them. We also do proactive enforcement in commercial zones, highly traveled areas, within school zones, and along residential corridors. It is important for issues to be submitted via Customer Service. It is also important for residents to leave their names and contact information so we can follow up if we have questions or to provide updates. While we do our best to monitor Facebook and Twitter, social media is not the place to report an issue to the City.

“We sent over 125 notices from the last storm and then had follow up phone calls and in-person visits with those who had not cleared their sidewalks. While a good portion of homeowners and property owners resolved issues in a timely manner, one area in particular, the Walmart Plaza on Connecticut Avenue, was nonresponsive to multiple notices. We will be issuing them a fine. It is important to note that icy and snowy sidewalks are a health and safety concern. It is the property owner’s responsibility to clear the sidewalks in all cases.

“There has been a lack of significant snowfall the last few years and folks may need reminding. We will continue to remind property owners in a proactive manner of their responsibilities to clear sidewalks. The enforcement team has been well received, and property owners appreciate the reminders. For example, the first storm of the year there were numerous areas in the Flax Hill Neighborhood that did not have cleared sidewalks, and for this second storm there were no issues. These efforts work.” 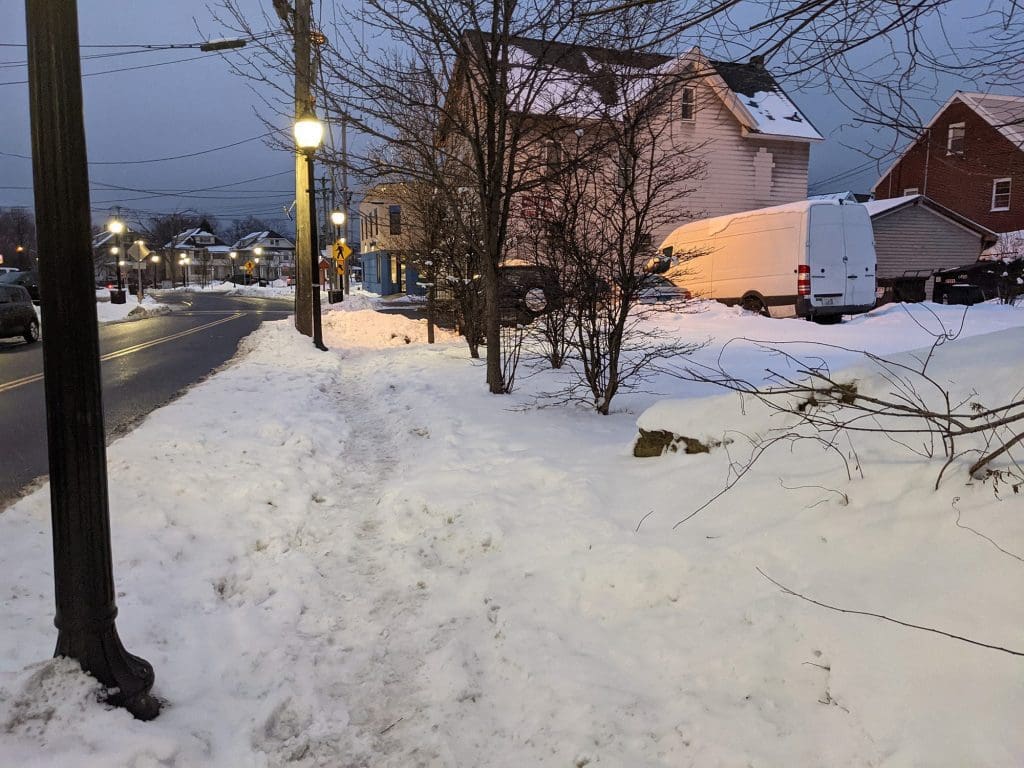 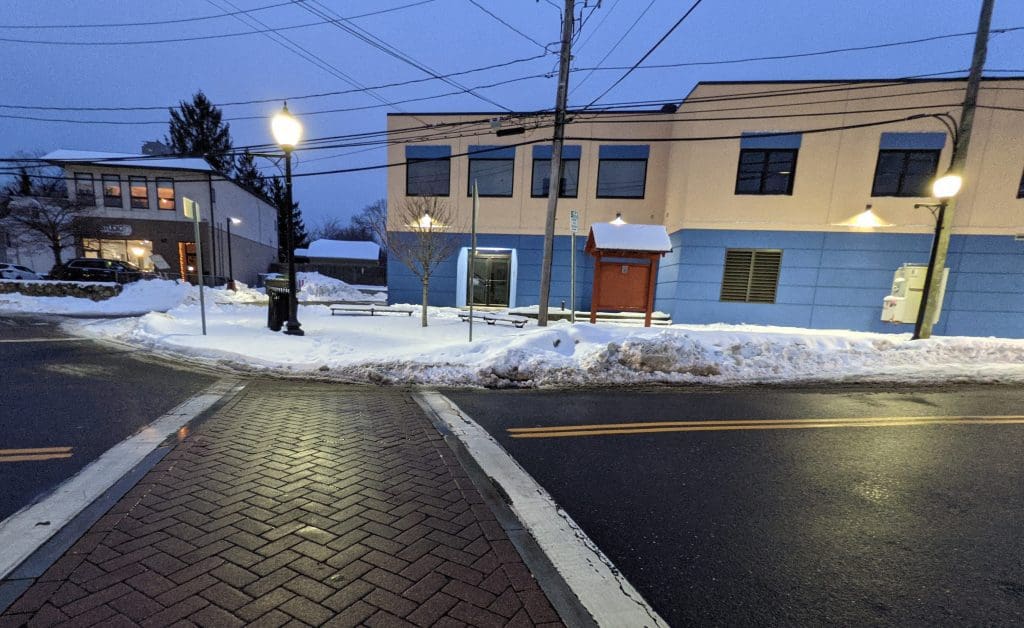 This is 66 Cedar St., owned by 66 Cedar Street LLC, according to the City’s website. The State lists Tom Yerinides as the LLC’s agent and member. (This photo was taken Feb. 9) 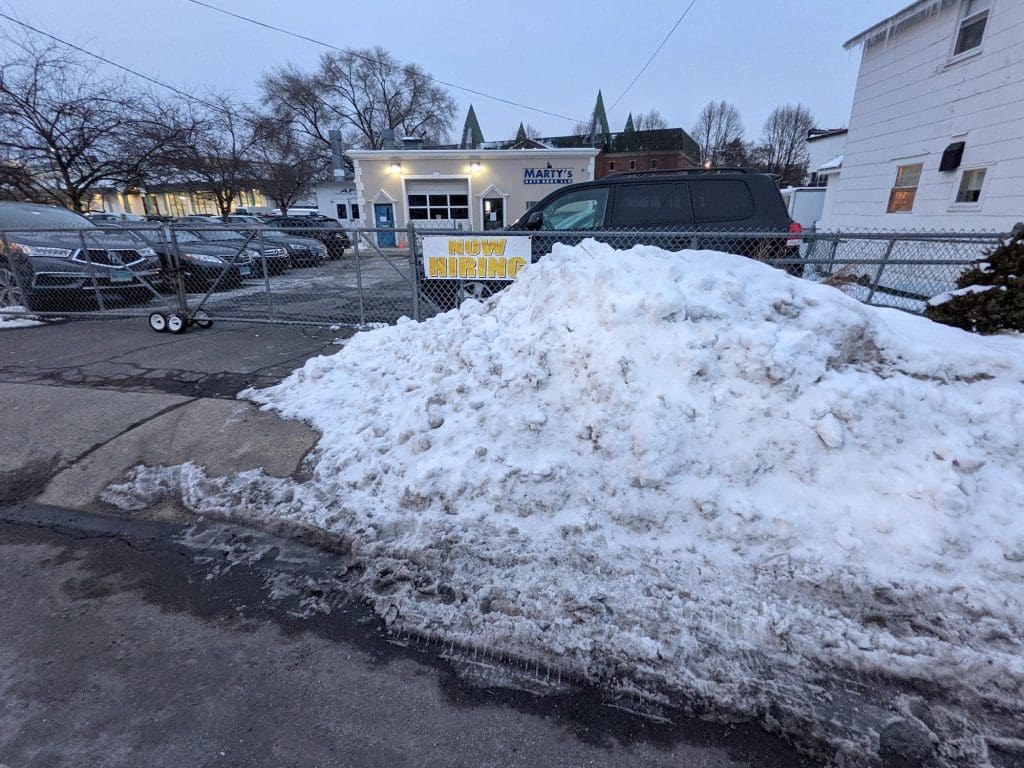 23 Cross St. is owned by D and R Properties LLC, according to the City’s website. The State lists Daniel B Murphy as the LLC’s agent and Murphy and Roger Lusardo, Jr. as members. (This photo was taken Feb. 10) 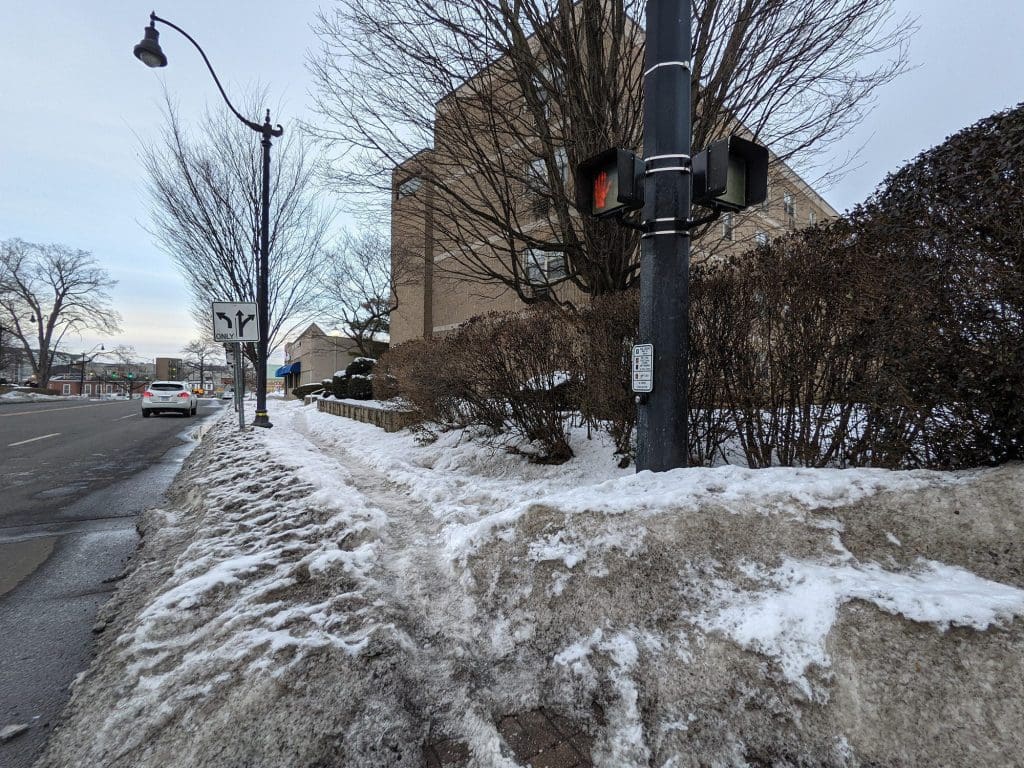 A number on this building indicates the address is 701 West Ave. but it’s really 1 Leonard St., which is owned by Norwalk Elderly Housing Limited Partnership according to the City’s website. The agent is Corporation Service Company, based in Hartford, and the partnership itself has a Boston address, according to OpenCorporates.com. HallKeen Management advertises the Section 8 elderly housing as “within walking distance to shops, restaurants, and pharmacies.” (This photo was taken Feb. 10) 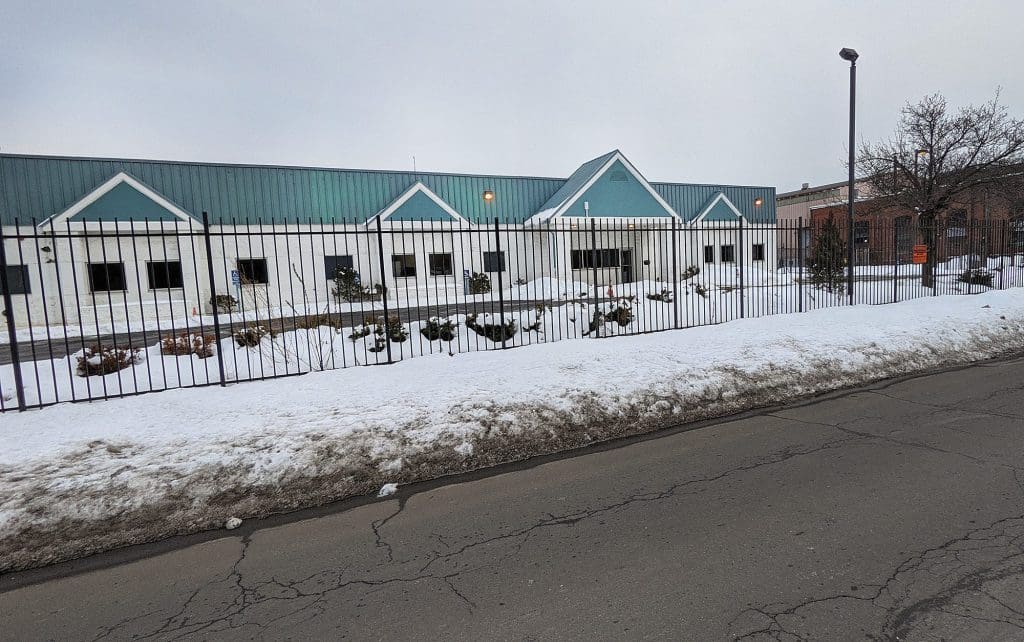 This property at 4 Meadow St. is owned by GWL 4 Meadow LLC, the City’s website says. The State lists GTJ Realty as the LLC’s principal member and C T Corporation System as the LLC’s agent. GTJ Realty, or GTJ Reit, is based in West Hempstead, N.Y. and C T Corporation System, or Corporation Trust Company, is a wholly owned subsidiary of Wolters Kluwer, a multi-national information services company based in the Netherlands with operations in over 35 countries, according to Wikipedia. (This photo was taken Feb. 11) 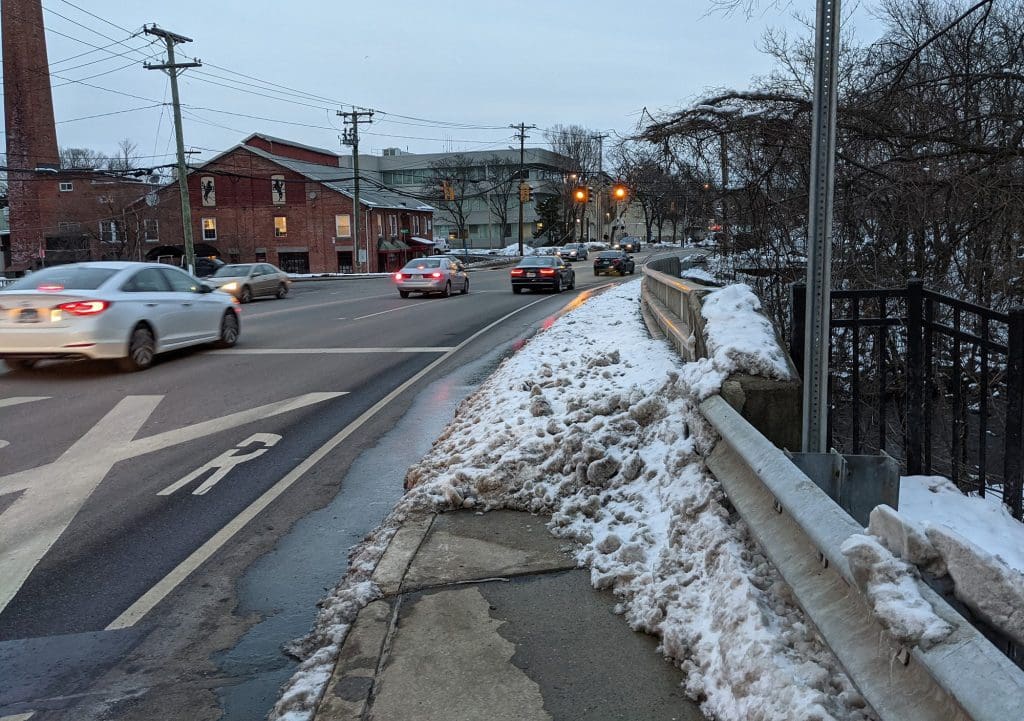 We live off Toilsome, a road popular for walkers and runners with sidewalks down the entire length, and I’d say only 1/3 or so are shoveled. People haul down that road and it’s pretty dangerous if you aren’t super careful. Those homeowners along there need to get on board!

That last picture is the Route 1 bridge over the Norwalk River. Isn’t the city responsible for that?

No photos, but there is barely a 1-foot passage from the street to get to the mail box a the Belden Ave. Post Office. It is that way every year. The curb is never cleared. Don’t know whose responsibility it is for them to clear their curbside–city or USPS. But something needs to be done.

Who is responsible for the sidewalk (like a hill) on Ct Ave going up to where Bob’s Furniture is – I do not know if it is clear now but last Wed it was covered with a ton of snow.

Tph, as reported in the caption, it’s a Norwalk Housing Authority project but the park belongs to the City. Norwalk Communications Manager Josh Morgan said it was an oversight and he promised to send a crew.

Yesterday, my husband and I wanted to take a walk at Calf Pasture Beach only to find that the sidewalks have not been cleared there–pretty surprising!

Sidewalks are chronically not cleared all over–city streets, state routes alike. According to the Norwalk snow removal policy ( https://www.norwalkct.org/DocumentCenter/View/2076/DPW-Snow-Removal-Policy?bidId= ) and code ( https://ecode360.com/27052320 ), homeowners and businesses are required to clear the sidewalks in front of their homes of snow and debris.

This winter season, after each snow storm, some property owners and some businesses have been totally irresponsible in clearing the snow from walking areas around their property. I too took a walk to Calf Pasture Beach only to find that the sidewalks have not been cleared there.

I am echoing Audrey, “Sidewalks are chronically not cleared all over–city streets, state routes alike. According to the Norwalk snow removal policy (https://www.norwalkct.org/DocumentCenter/View/2076/DPW-Snow-Removal-Policy?bidId= ) and code ( https://ecode360.com/27052320 ), homeowners and businesses are required to clear the sidewalks in front of their homes of snow and debris.

IF snow removal of sidewalks is our biggest problem life is ok.

Hahaha! As someone who walks to the train station every day, I’ve been complaining (via the official app) about snow-covered sidewalks for EIGHT YEARS now, and never once has the city done anything about it. Including sidewalks owned by the city itself.

Good luck getting this to change.

@Celeste – I actually just went to the post office yesterday and it’s still the same way! That was quite shocking.

The many of sidewalks on DryHill Rd are never cleared, until the
snow melts. Can’t walk to Stews, even days after snow fall. Not just
this year, but for many years. SAD