NORWALK, Conn. — How does Wolfpit respond to a power outage on top of a pandemic?  Multiple streets were still without power Friday morning as Bob Welsh toured the area.

“The humor is turning pretty weird.  A few Wolfpitters might be 24 hours from going full-on Lord of the Flies,” Welsh said.

Here are his photos and captions: 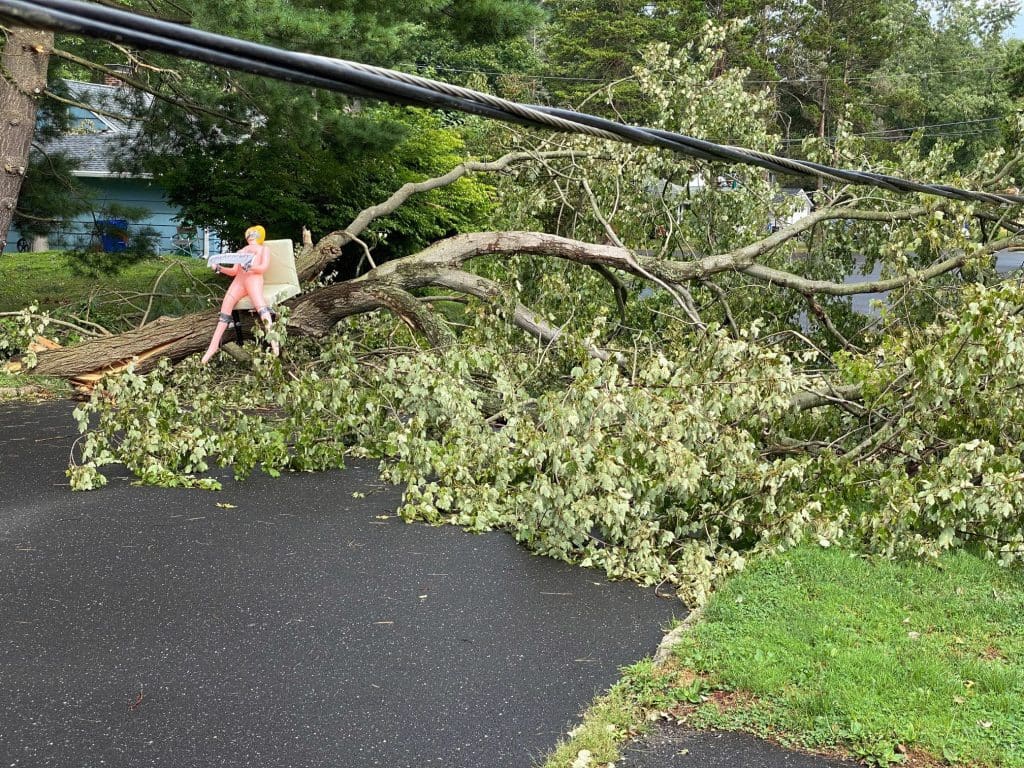 A storm-felled tree, and the overhead wire it damaged, block Assisi Way near Mark Drive Friday morning. The area lost power Tuesday afternoon. As of 6 p.m. Saturday, the tree remains. A resident who declined to give his name said he was ‘shocked’ by the amount of storm damage and disappointed to receive no communication about the outages until 11 p.m. Thursday. While he waits for power to return, he’s trying to keep food from spoiling with coolers and ice from Stew’s. What’s that peculiar object near the tree’s base? 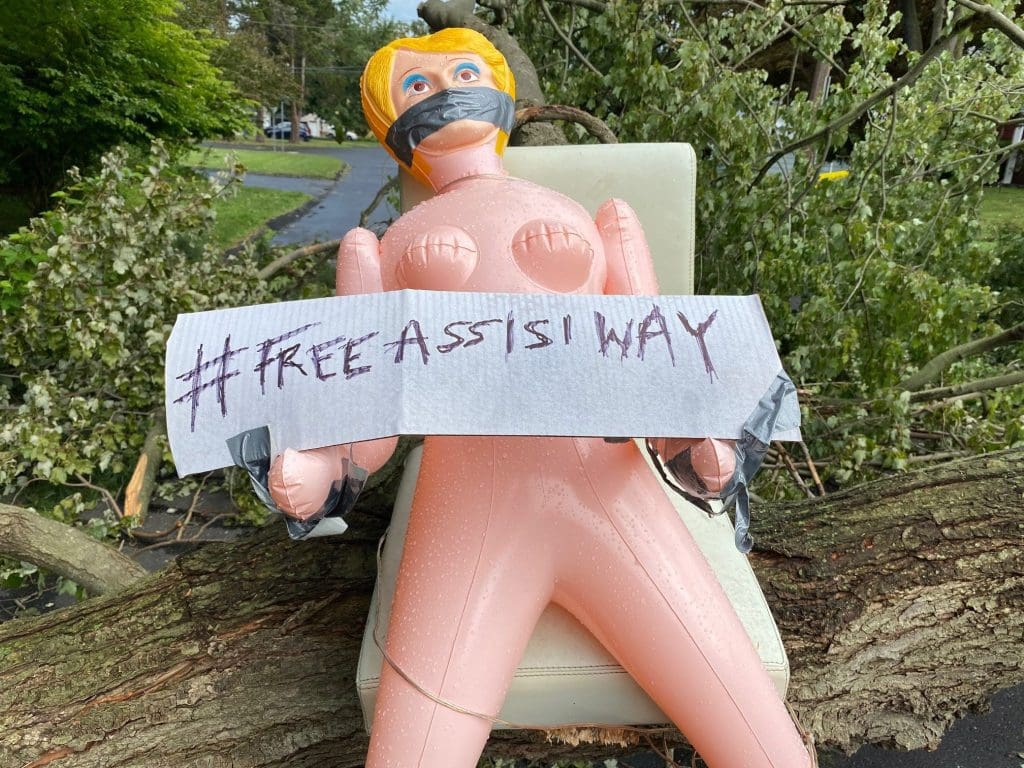 It appears to be blow-up doll protest art. The same resident who declined to give his name said he and others wondered who installed the sign-bearing inflatable. The tree blocks the street, but Assisi Wayans can exit via Thornapple and other streets, he said. 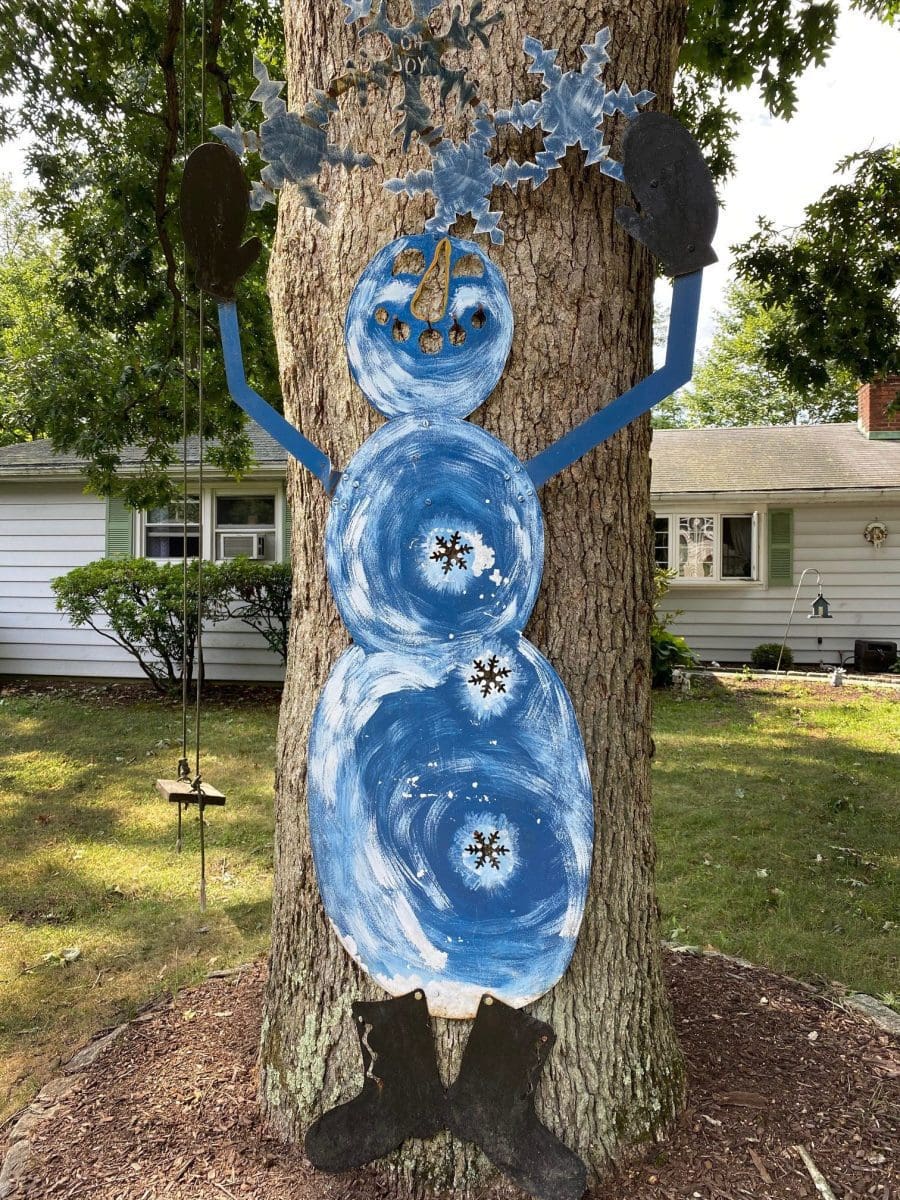 Meanwhile, around the corner in front of 2 Leatherwood Drive, someone’s put up winter decorations. “Oh joy” proclaims the snow creature, as a thrumming generator signals a working freezer. 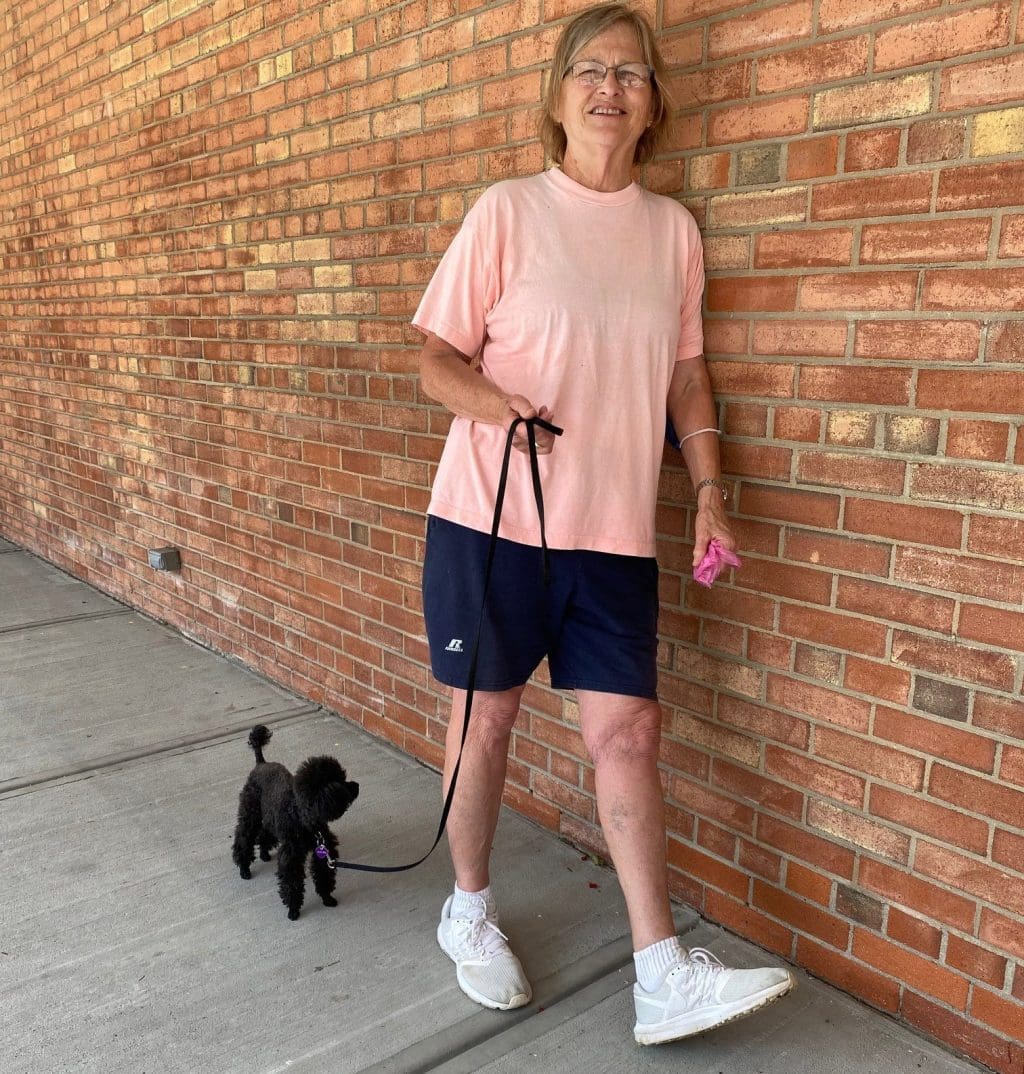 Dog walker Judy Henry of Fairfield and poodle Lily Rose of Norwalk stroll at Wolfpit Elementary. Henry was one of the few lucky Fairfield residents who didn’t lose power. Rose, who lives with her owner near the Norwalk/Westport line, didn’t fare as well, and spent 48 hours without electricity. She declined comment, except to say that it was “ruff.”

My teenagers, their friend & I came upon the doll Wednesday night & had a much needed laugh to relieve some cabin fever stress. I hope the Assisi Way residents did too!

However, we can tell you, the sign was not there at that time. Obviously, the houses were dark & we knew the residents were not aware of her presence (residence?) as all of their garbage cans & recycling bins were already at the curb & it was pretty late.

Teens being teens, they would not let me take a picture but we have wondered about her & her fate, even suggesting we drive by again Sunday night to “see if she’s still there.”
Thank you, Bob Welsh, for the confirmation. Retelling this story to family & friends just doesn’t have the same effect as being there so thank you for the article as well.

Hello Nancy, so awesome that you are tuned in to Norwalk and in particular my neighborhood upon reading your various articles. I have a suggestion for an article. I’m a big dog walker and with this incredibly awful humid hot weather people are not taking care of their pets walking with water. If people can only imagine walking in this weather with a fur coat on? Just a suggestion and keep upThe great work love reading your articles