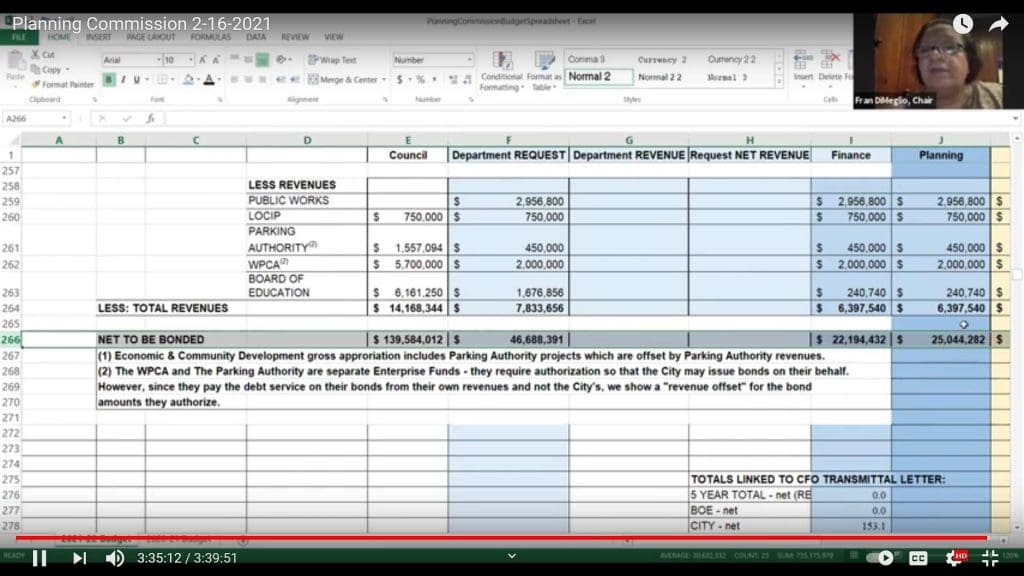 The Planning Commission’s recommended capital budget is nearly $3 million higher than the austere recommendation from CFO Henry Dachowitz, a 10% increase would allow Rilling to fund the Silvermine Elementary School driveway and school bathroom renovations in the coming year. It would also give the Norwalk Public Library $38,000 of the $75,000 it requested, when Dachowitz had snubbed the library’s request entirely. And work on the Norwalk River Valley Trail could continue. More importantly, there would be funding for stormwater management in the coming budget.

Over the last four years, the Planning Commission’s record in reversing the direction recommended by the Finance Department is spotty. Rilling has usually gone in another direction and the Common Council has almost always approved Rilling’s recommendation.

Rilling’s recommendation to the Board of Estimate and Taxation is due in five days. Dachowitz has warned that Norwalk’s triple A bond rating would be jeopardized by too much borrowing; the Planning Commission’s recommendation for $31,441,822  in 2021-22 capital spending falls well short of the $120 million threshold mentioned by Dachowitz. The Council votes on the budget in mid-April.

The Commission is a step in the process: its eight members spend many hours going over capital budget requests, then hold a public hearing. Then they make a recommendation for the Mayor, simultaneously taking their responsibility very seriously yet having the light-hearted freedom in knowing that theirs isn’t the final say.

Most notably in its recent maneuvers, last year the Commission cut the Finance recommendation for $273 million in school construction to $55.3 million. Rilling brought it back up to $102.7 million. This concerned the surprise addition of a new Norwalk High school to the mix.

This year’s Planning Commission recommendation, submitted by Chairwoman Frances DiMeglio to the Mayor on Monday, recommends spending $1 million on school bathrooms. Dachowitz had a “0” in that column and the Board of Education had asked for $1.5 million.

“No excuses can be made as to the lack of attention in this area. This funding is recommended to upgrade the bathrooms in the two schools that need it the most within this fiscal year 2021-2022,” the Commission wrote to Rilling. “Many parents spoke at the public hearing regarding the deplorable conditions that these bathrooms are in. Parents voiced many health concerns that need immediate attention. These below standards, non- hygienic conditions, especially in a pandemic year, are appalling.”

The Board of Education had originally withdrawn its expectation for $1.5 million in this year’s capital budget for the Silvermine driveway, divulging that the driveway’s design hadn’t been done due to the pandemic. The Board reversed that and formally made a request.

Dachowitz recommended no funding. The Planning Commission thinks the BoE should get the full $1.5 million.

“Even though the Study piece is behind schedule, after hearing the many safety concerns expressed by parents at the public hearing, it was felt that withholding funds at this juncture would jeopardize the entire project,” the Commission wrote.

In other wins for Norwalk Public Schools, the Planning Commission recommends $728,350 for instructional technology and $363,500 for curriculum, in both cases half what the Board requested. Dachowitz had recommended nothing for IT and $250,000 for curriculum. The Commission wrote that their amount provides “not full but sustainable support.”

A Planning Commission recommendation for DPW touches on education: it would fully fund requested repairs at the Nathaniel Ely center with $275,000, a request Dachowitz recommended refusing entirely via a “0.”

“Nathan Ely houses one of the largest pre-schools in Norwalk.  Major concern is the upgrade of the HVAC system,” the Planning Commission wrote.

The Planning Commission would spend $500,000 for stormwater management, when Dachowitz recommended nada for an $875,000 request.

“This is a continuation of a five-year plan to comply with the State of Connecticut mandated MS4 program. Reducing pollutants in stormwater runoff before it enters storm sewer systems important aspect for a City that enjoys many miles of shoreline,” the Commission wrote.

The Planning Commission recommends cutting DPW’s pavement appropriation by $1 million, making it $6 million. This is a recommendation the Commission makes year after year, and Rilling ignores.

The $3 million increase recommended by the Commission also:

The recommendation puts the ball in Rilling’s court and the following analysis shows how that usually goes.

A four-year history of Planning Commission changes, in terms of wins and losses

Regarding fixing the bathrooms — $ 1 Million Dollars is a lot of toilets!! If that’s the cost of fixing the bathrooms let’s do it, but geez that’s a big chunk. Can anyone tell us how the bathrooms fell into disrepair? Are students allowed to bring sledgehammers to school? In current culture do we discipine students who destroy stalls or is that considered OK by current administration?
..So, we not only don’t challenge our students (Minimum grade is 50 if you do absolutely nothing if you recall) Our teachers are evaluated for being sociologists as much as actually teaching. And now students destroy bathroom’s and are not held accountable? Call me old fashion, but this all sounds ridiculous to me. I call on Henry Dachowitz to do a thorough investigation into what the heck is going on..This is ridiculous.
Call me..I know 20 plumbers in Norwalk alone that can fix the freaking bathrooms for less than 1 million dollars. In fact, they’ll throw in a roll of toilet paper as a bonus..

Didn’t the Senate just approve alot for schools. Should be plenty if Hartford sends it down

I again wonder how do bathrooms get in such disrepair. Can’t we get someone from BOE or facilities to access the bathrooms at EVERY school. I ask again why are we not checking and assessing them and repairing as we go along. The solution has to include how not to let this happen again

@Sharon
By current law, federal money is not for operating or capital costs.
It is for Covid-related resources and programs only. Things like extra summer school and temporary staff, further HVAC : filtration upgrades, additional technology needs going into new year, mental health support, etc. Much of these needs are still being studied to see what is necessary based on student needs and timeline.

It’s also very unclear when and how this money will be disbursed.

@John
I don’t disagree we should due our diligence in finding the most cost effective ways to resolve these issues, but Norwalk has over 30 schools, the majority of which have bathrooms in need of upgrades. And by upgrades, we mean “get to baseline”. Many of these are redos as the arrangements need to be reworked to accommodate more kids and better orientation for privacy and reworked plumbing to go with it. It’s not just replacing a few toilets and doors.

With regards to the bathroom repairs. With the million dollars funding this project think if what the possibilities are.

Anyway, why not fix one and renovate the other into a class room? I mean with the gender neutral crowd screaming this makes perfect sense right.

Think of the savings while adding classrooms for the new residents that will be arriving soon.