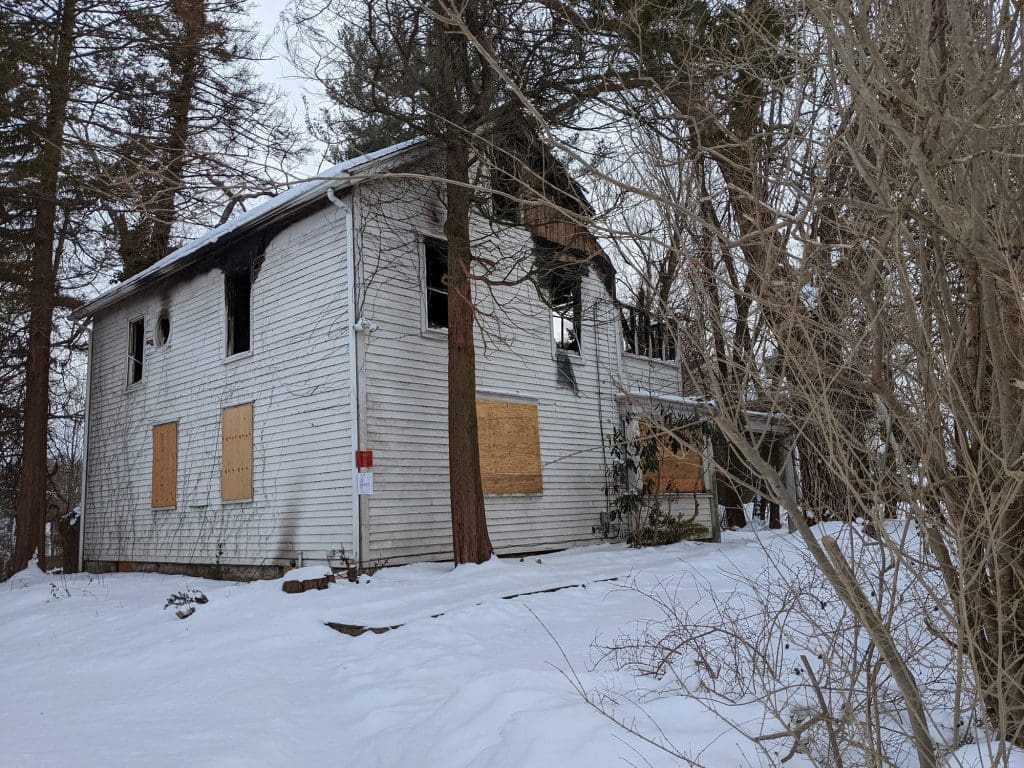 The City plans to demolish this former home, next to Nathan Hale Middle School.

NORWALK, Conn. — An unusual hearing ended Wednesday with a unanimous Board of Condemnation vote to demolish 162 Strawberry Hill Ave., deemed unsafe due to a fire. The house is located near Nathan Hale Middle School.

“It’s come to our attention and concern about the structural stability of the building,” Chief Building Officer William Ireland said. “Since we have an adjacent school and tennis courts, and we are in fear of collapse really structurally because of the weight of snow. There’s also some health and fire issues there. And of course, like you just mentioned the significant fire damage over the past year.”

There is no Board of Condemnation listed on the City’s website. Its members included Ireland as well as representatives of the fire marshal’s office and the Norwalk Health Department.

The property was previously owned by Stanley Thompson, and his wife Lee, who was in attendance at the meeting for her husband. However, Thompson and city attorney Matt Sapienza said that the property had been foreclosed on by a bank. Thompson said they no longer own the property.

“We no longer own it anymore, the bank does,” she said, adding that her husband suffers from dementia.

Sapienza said that there have been delays with the foreclosure, which is why legally Thompson was still listed as the owner and had to be notified of the hearing.

“Upon review by the law department, it looks like a foreclosure action was commenced by a bank, but the action is still pending,” he said. “There’s been delays for whatever reason. In the law department’s view legally, Mr. Stanley Thompson is still the owner of record of a property although a foreclosure has started but legally title has not changed. So in the city’s view, Stanley Thompson is currently the owner and that’s why we just want to make sure that they were notified. We have notified the bank via email, and I believe, registered certified mail of this meeting. The bank who initiated the foreclosure action doesn’t look like they have decided to attend today.”

Thompson said she and her husband went by last week and were “shocked” that the building hadn’t already been torn down.

According to City ordinance, the City has to wait 30 days to demolish the property, to allow for property owners to put forward their own mitigation plan, even though Thompson said they had no intention to do that.

In the interim, Ireland said that they would check in on the property to make sure it didn’t become more unsafe.

Wednesday’s Board of Condemnation hearing on Zoom.

I think the house can be saved. Some developer will tear it down and put 3 houses there.

I remember in the late ’70s walking by that hidden house going to Nathan Hale – it seemed so strange that house concealed behind that huge hedge.

Looks like a nice lot for a 4 story apartment

The City should take ownership and add the property to the school.

Perfect spot for the mayor to shoehorn in some “affordable housing” from a preferred developer elsewhere in the kingdom. Wink wink.