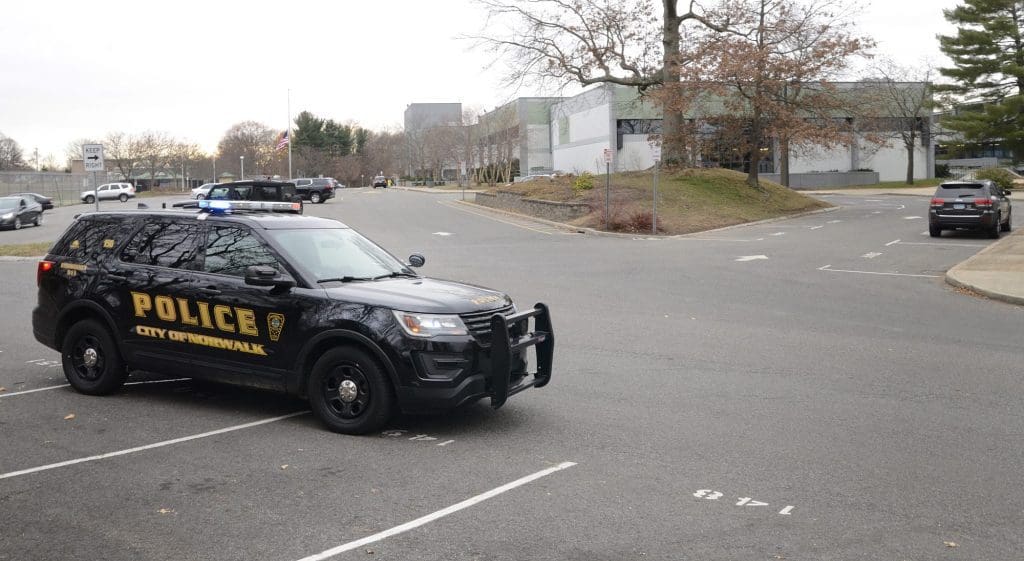 NORWALK, Conn. — Norwalk High School was locked down Wednesday due to a threatening phone call, for the third time within a week. Norwalk Police searched and cleared the building, at which time students were dismissed.

Just before midnight, Norwalk Police announced they have arrested a juvenile in connection to the “three hoax threatening incidents at Norwalk High School.”

“The juvenile was charged with Threatening 1st, Threatening 2nd, (3) counts of Falsely Reporting an Incident 1st, (3) counts of Breach of Peace 2nd and (3) counts of Conspiracy.  The juvenile has been referred to Juvenile Court.  The incidents remain under investigation and anyone with any information is asked to contact the Detective Bureau at 203-854-3011,” the NPD announcement on Facebook said.

Earlier Wednesday, police said they’d enlisted the assistance of the FBI to determine the source of the threats.

Wednesday’s incident began with a 1:35 p.m. threats notification, the news release said. “The incident was handled calmly and efficiently thanks to the cooperation of school staff and students. The increase in police presence will continue,” Chief Thomas Kulhawik was quoted as saying.

“Our Technology team is working closely with the Norwalk Police Department and FBI to support their investigation. We hope this work leads to identifying the individual responsible for this chain of events,” Norwalk Superintendent of Schools Alexandra Estrella was quoted as saying. “We will continue to have our district crisis team available to support our students and staff. This includes counselors, social workers and psychologists, as well as staff from Mid-Fairfield Child Guidance and Family & Children’s Agency.”

Parents report that the incidents have been tough for the kids to take.

“My daughter said she is going to go to school tomorrow because she knows she has to but that she definitely doesn’t feel safe and is super anxious that something bad is going to happen. She also said that she fears that since people keep making the calls that the police aren’t going to take it as seriously the next time there’s a threat and then something bad is actually going to happen obviously I’m reassuring her but it’s just sad to see her so anxious,” a mother said Wednesday on the Facebook page Norwalk Parents for Education.

“I am keeping both of my boys home tomorrow and my son in Naramake who is so scared because of the lock down   This is so scary,” another parent said. “Between covid and now all this, these poor children will have major anxiety. They will all need therapist.”

It was also pointed out that Norwalk is not alone in dealing with troubling behavior. A Patch article states that students have been arrested in school threats across the state, including in Hamden and Vernon.

“We felt very strongly from the beginning that it was probably a hoax,” Rilling said. “We get these all the time. You’ve heard of the swatting incidents that are taking place, you’ve heard of bomb threats, and all these things that for some reason, somebody thinks it’s a funny thing to do, or it’s fun to do. They don’t realize, number one, how it impacts people’s emotions, how they feel about it. It makes young people scared, it makes parents concerned about the safety of their children. And it costs a lot of money. But that’s the least of the things.”

He said it cost $25,000 to respond to one of the incidents, and in a “falsely reporting an incident” charge, “the court would most likely assess damages… the person would have to pay back the response to the city the money for the city that it costs.”

Kulhawik, in the late Wednesday announcement, cited “the thorough and tireless work of the Detectives that investigated and solved these crimes.”

“I also wish to thank our federal partners for their willingness to assist and the community for their cooperation,” he said.

“Thank you to the Norwalk Police Department and our law enforcement partners for their outstanding work on this case. They worked tirelessly to find out who was responsible. I am glad this issue has been resolved,” Rilling is quoted as saying. “I hope our community can rest easier knowing that this person will be held accountable.”

It’s sad that the paranoid gun owners live in so much FEAR that they NEED to have weapons. This is a symptom of the gun control issue that society cannot control.

He said it cost $25,000 to respond to one of the incidents, and in a “falsely reporting an incident” charge, “the court would most likely assess damages… the person would have to pay back the response to the city the money for the city that it costs.”

Now there’s a seed for a good article. How many times has the city been reimbursed for costs involved investigating “falsely reporting an incident”?

Norwalk PD is the best. Thank You Chief K and the team.
I’ll be interested to see how this poor misguided child is handled by the system. Maybe positive behavior incentives, or mediation, or peer to peer counseling will do the trick.

Great job by The Norwalk PD. At least all the families at NHS can rest a little bit now

Just love all the NPD worship for… uhh… *doing their jobs*.

Did the City get reimbursed for Bob Duffs false report?

@David – Not sure what you do for a living, BUT a little pat on the back for a job well done feels pretty damn good. You’re a smart guy. It shocks me you don’t grasp that concept…
Norwalk PD – Thank You.