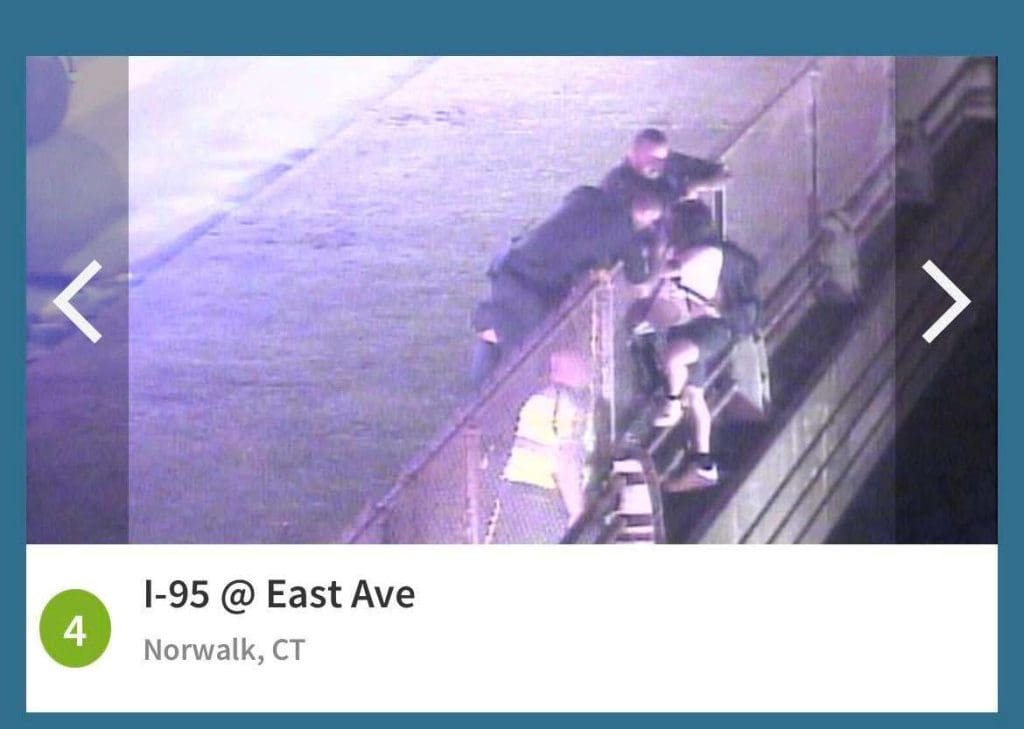 NORWALK, Conn. — Norwalk Police officers put themselves in harm’s way to reach a man who was standing on a ledge over Interstate 95 on Sunday, according to a news release. He was pulled to safety.

A Norwalk resident who was listening to a scanner as the incident unfolded went straight to a weather website to see traffic cameras, showing police interacting with the man, and she caught the images. She said she heard police urgently calling for a Norwalk Fire Department ladder and watched as at one point, began to lose their grip on the man on the ledge. The camera feed stopped before the incident ended.

A 911 call came in at about 11:33 p.m. Sunday reporting that a man was standing on a ledge outside of the fence on the East Avenue bridge over I-95, the Norwalk Police Department news release said.

“Multiple officers rushed to the scene,” it said. “The first officer on scene was able to grab the man’s shirt through the fence while a second officer spoke to the man, trying to keep him calm. As more officers arrived to the scene, they began to gain access to the man over the tall fence by standing on police cruisers, lifting each other up, and even standing on each other’s shoulders. The man was successfully pulled to safety, despite struggling against officers.

It continued, “The Norwalk Police Offices that responded to this scene acted without hesitation, placing themselves in harm’s way. The officers brought a chaotic and dangerous situation to a safe conclusion. We commend their valiant efforts, their teamwork, and their dedication to the community that they serve.”

Scanner traffic indicates police shut down East Avenue and I-95’s northbound side while they worked to get the man off the ledge. Lt. Dave O’Connor, incident commander, repeatedly called for a Norwalk Fire Department ladder truck. Six minutes after the first request, he reported that the man had been pulled over the fence. A fire engine had been en-route and was cancelled.

“If you are considering suicide, or know someone that is, for immediate help 24/7, call 2-1-1 in Connecticut, or call the National Suicide Prevention Lifeline, 1-800-273-8255,” the news release said. “Send a text to the Crisis Text Line, 741741. To learn about the warning signs of suicide, what to listen for, what to say, and what to do for someone that may be suicidal, check out these resources: CT Suicide Prevention | Connecticut Suicide Advisory Board (preventsuicidect.org), Regional Behavioral Health Action Organization | The Hub CT | Norwalk (www.thehubct.org).”

Great job by NPD to save a life. Suicide is a permanent solution to a temporary problem. Reach out for help. Your not alone.

Good job Norwalk PD, but that press release was ridiculous. I was waiting for the part where the officers baked a birthday cake for a group of orphans while saving a group of puppies at the same time.