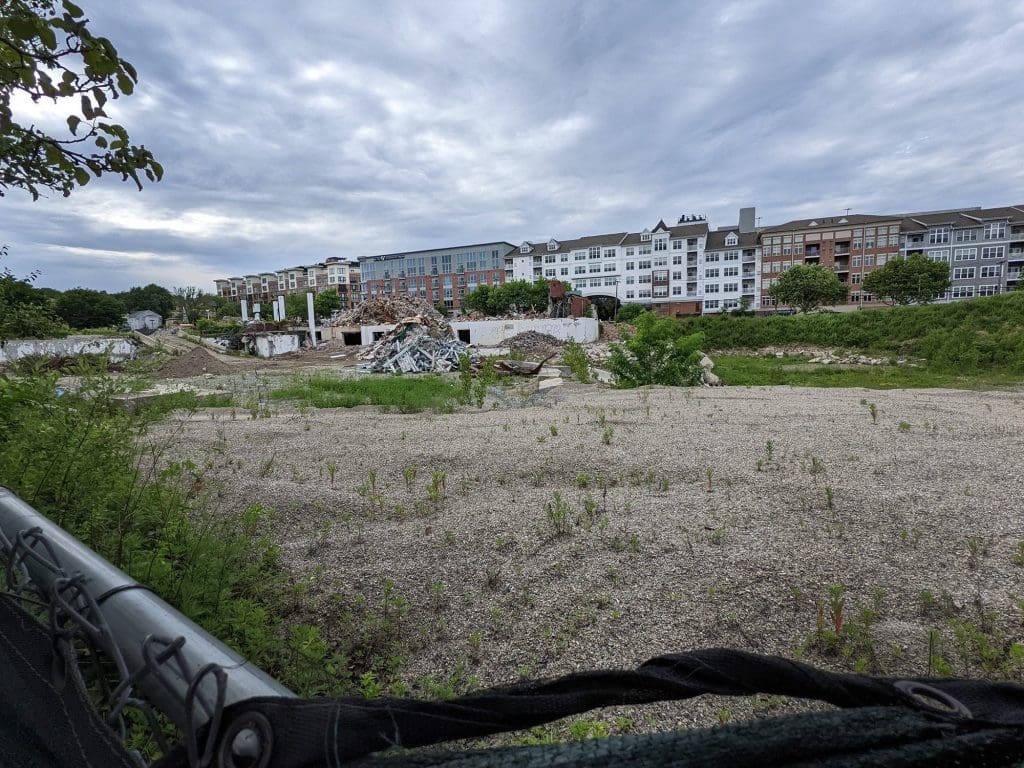 The Berkeley at left and The Waypointe at right, as seen June 7 from Butler Street with the partially demolished former Loehmann’s Plaza in the foreground. Toll Brothers plans to build The Pinnacle on the former Loehmann’s site; it would be the last Waypointe district construction.

The recent sale of Waypointe District apartment properties brought more than $1 million to the City’s coffers.

According to Town Clerk Rick McQuaid, the sale of the three properties netted $1,042,102.50 in conveyance taxes paid to the City.

Norwalk got $277,500 in conveyance taxes from that sale, McQuaid said.

Avalon East Norwalk was sold in March. City records show that the purchase price was $88.6 million; Avalon Bay bought the 8 Norden Place property in 2011 for $9.9 million, and then built the 240-apartment complex. The buyer, Boston-based DSF Group, will rebrand the complex as Halstead Norwalk, according to ReBusiness Online.

McQuaid said Norwalk received $515,000 in conveyance taxes on that transaction.

A party held last week at Calf Pasture Beach was described in positive ways by Norwalk Board of Education members on Tuesday, but a credible source suggested teacher turnout was disappointing.

Norwalk Public Schools Chief of Staff and Communications Brenda Wilcox Williams explained in an email, “The Norwalk Education Foundation partnered with NPS to host an informal, end-of-year celebration at Calf Pasture Beach last week, with an estimated 300 people in attendance. Ripka’s provided the food and Old School provided the music, with funding for both courtesy of the Dalio Foundation.”

“We had the most wonderful time at Calf Pasture,” BoE member Mary Ellen Flaherty-Ludwig said Tuesday.

Norwalk Superintendent of Schools Alexandra Estrella suggested that there were probably more than 300 people there, because that number was based on meal tickets.

“It was overwhelmingly positive what we heard from the staff that was there, about how appreciative they were that we took the time to engage in such an event for them to celebrate them at the end of the school year,” Estrella said.

The source said most teachers stayed away out of a sense of not being appreciated.

There are 1,000 members in the Norwalk Federation of Teachers, NFT President Mary Yordon said.

The party was for all staff members, not just teachers, Wilcox Williams said.

“It’s just going to be a social, we’re not doing any politicking. But I thought it was a good way for us to be able to come together outside of budget time and just be able to, you know, share some food and drink,” she said.

BoE Chairman Colin Hosten emphasized that no City business would be done.

BoE member Janine Randolph suggested that the “efficiency study might have been an inspiration.”

Evergreen Solutions, in its efficiency study, mentioned “unproductive infighting” between the Board of Education and City leadership. It suggested more joint meetings.

“That’s important for us to work as a whole unit, in a town or city, to get to know each other,” Randolph said. “I think it’s a great idea.”

Next door, in Scamford, there was a large commercial building sale and while the town received their conveyance tax, the state waived it.
Try that with your home…
Also, next door, the mayor has pushed to use conveyance taxes to cover “items” that go over budget without Board approval. And the Board may allow it!
Corrupticut never ceases to amaze.

I have to laugh about the picnic and teachers not showing up. Why would you hold a picnic right before school lets out and expect them to show up? Do they not know how busy everyone is with all the stuff that needs to be done to close out schools?