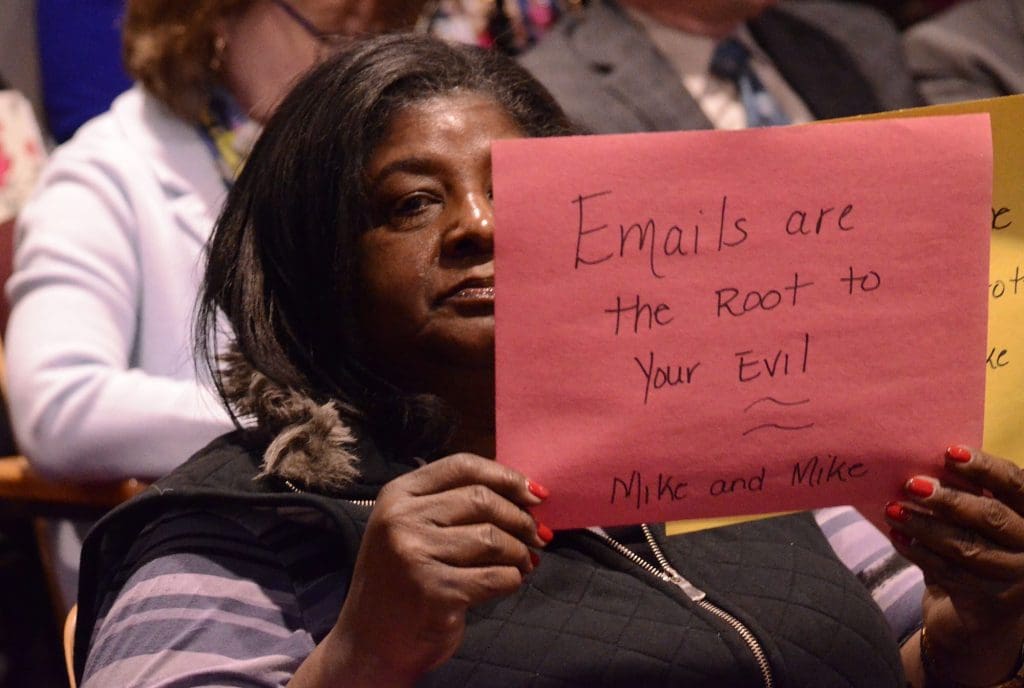 Norwalk Branch NAACP President Brenda Penn-Williams waits for a March Board of Education meeting to begin in City Hall.

The Hour on July 24 reported that the First Taxing District found low levels of  per- and polyfluoroalkyl substances (PFAs) in its water.

Duff on July 24 released a statement:

“PFAS are called ‘forever chemicals’ because they do not break down in nature or in the human body. The worst and most recent example of PFAS pollution in Connecticut occurred several weeks ago after approximately 50,000 gallons of water and firefighting foam containing PFAS leaked from a private airport hangar at Bradley International Airport and into the Farmington River. The issue is so serious that Governor Lamont has formed a state working group to study PFAS and recommend ways to minimize environmental exposure, minimize future releases, and assess cleanup methods.

Friday’s forum is open to the public, and is at 10:30 a.m. in City Hall’s community room. Expected are:

Whatever happened to the NAACP/BoE issue?

This is a question NancyOnNorwalk has heard lately: what happened to the animosity inspired by the news that Board of Education Chairman Mike Barbis had urged BoE members not to attend the annual Norwalk NAACP fundraiser in November?

We last visited this topic in April. Mayor Harry Rilling had reportedly been trying to arrange a meeting between Norwalk Branch NAACP President Brenda Penn-Williams and Barbis, but Barbis in March took offense to comments made by Penn-Williams and the Rev. Lindsay Curtis.

The NAACP had demanded that Barbis resign. Curtis told NancyOnNorwalk that Barbis had failed to show a “basic element of respect” when Barbis hadn’t looked Penn-Williams or NAACP Board member Eric Fischman in the eye when they spoke at a Board meeting.

Rilling in April said “An unfortunate series of events created more of a problem in trying to arrange a meeting. I am hoping that with a little bit of a cooling off period that I would be able to, once again, encourage Brenda and Mike to sit down at the table and have a conversation about working together and moving forward in a cohesive manner.”

“I have not heard anything, I have not met with Mike Barbis,” Penn-Williams said Monday.

“We’ve not had any further discussions on this issue,” Rilling said in a Wednesday email. “Things have seemingly been much better but I’m still open to meeting with Ms. Penn-Williams and Mr. Barbis.”

Barbis did not respond to a Wednesday evening email. He is unopposed in his drive for reelection this fall.

No primaries this year

The deadline to file petitions to force a primary passed at 4 p.m. Wednesday, with no petitions submitted, Democratic Registrar Stuart Wells said.

Darnell Crosland had promised to force a Republican Mayoral primary but announced that he would seek a Common Council seat instead. Jermaine Nash obtained the paperwork to collect signatures in District A, in pursuit of a Common Council seat, but never submitted petitions, Wells said.

“No one has filed any petition pages,” Wells wrote. “Since the deadline has now passed, there will be no primaries this fall.”

I think more people need to attend the water hearing.

Here is the link to the video where Brenda Williams was out of order at a BOE meeting. Watch from the 8;30 mark. https://m.youtube.com/watch?v=scjFd0Fn-bI

I guess (?) this was our invite to the dinner spotlighting her a few months later.

Now you have part of the rest of the story. I can assure you it is worse than what is in the video.

Can someone ask Duff where our monthly financial report is? It should have been out a week ago. This report was essential in explaining how we were going to make up the $3 billion gap in tax revenues in the month of June when the state only collects about half that a month. This was supposed to turn into a $700 million surplus. When do we get to see how they cooked this up? https://www.osc.ct.gov/reports/index.html

Or is Duff too busy doing Himes job of fighting the 2nd amendment and chasing parts per billion in the water supply?

I think the question needs to be asked why Mike Barbis is allowed to just not answer emails and avoid when people are trying to arrange meetings with him. It seems that April-August is a decent “cooling off” period.

Bully Barbis…will no one stand up against him? How and why is this being buried?

The comments about Duff are a pretty big diversion from the conversation that’s going on Bryan Meek.

That video really isn’t some shocking thing. So she went over her 3 minutes a bit. It’s not like there was a line of people waiting to speak. The things she was talking about was pretty valid stuff.

I watched the video. Barbis was rude from the very beginning of the meeting (on his phone, reading papers, and not listening to the first report). Once Brenda spoke, Barbis was clearly miffed about something. At this point, he looked and acted angry. Brenda was only over 3 minutes by a couple of seconds and Barbis kept gaveling. The final exchange was unwarrented. I believe that Brenda responded much better than I would have to such open animosity. Kudos to the person who tried to calm him down and note that Barbara Myer-Mitchell’s face speaks volumes about the unprofessional behavior Barbis was exhibiting. Just sayin’ what i saw and heard.

The entire rant against staff is over 6 minutes….

And…should I bring up the false accusations against the district of child abuse and endangerment that were later proved to be bogus?

And.….Duff is in this story in case you didn’t read it before commenting?

When I was on the BOE I noticed that a certain group of NPS leadership, specifically those who had something to hide, protect, CYA, etc, seldom, if ever, responded by email (aka written, documentable form). They preferred phone calls or in-person meetings, harder to trace.

Mike Barbis may be unPC at times but he is honest and outspoken, not tricky and uses email. I find that refreshing.
.

“Un-PC” and “refreshing” really shouldn’t appear in the same thought.

Sorry ‘And….’. We can agree to disagree. I’m old school, I prefer honesty even when uncomfortable.

Sue Haynie-There’s “the truth hurts” but then there’s Un-Pc-Get-With-It-People-Shouldn’t-Act-or-Speak-Like-That-Anymore. Sometimes Old School can be bad and it’s time to evolve.

Correct And … PC and the truth ARE different – in fact, they’re opposites. PC is about saying false things people like to hear, instead of truths they’d rather not hear. Barbis speaks truths.