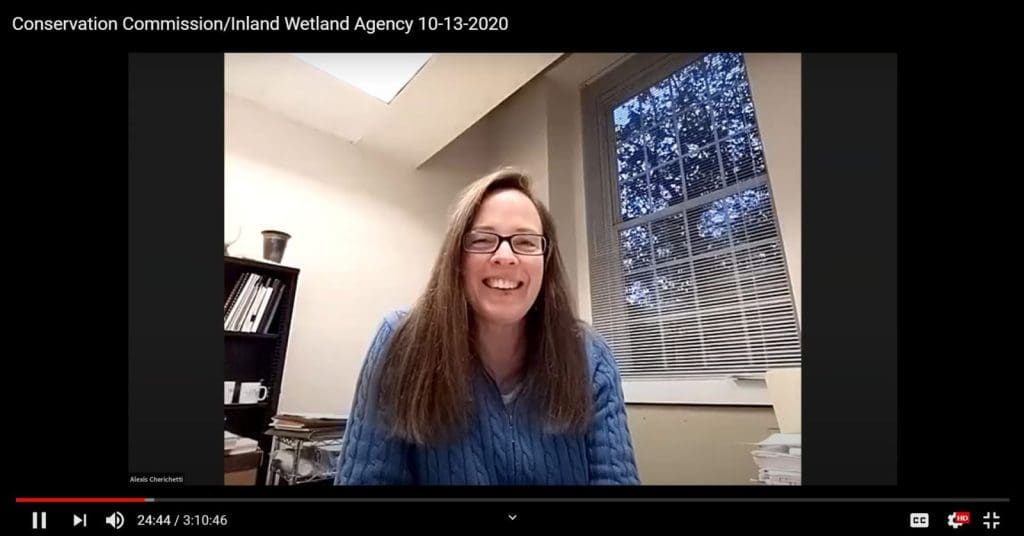 Cherichetti has been Norwalk’s environmental officer since at least 2001.

“When Mike Wrinn told me he was leaving I started thinking about the future makeup of the department and the needs of the community going forward.  I ended up splitting the duties of the Assistant Director, where the administrative tasks were separated from the work with the Commissions, mainly the Zoning Commission.   We ended up retitling Mike’s old position to ‘Principal Planner’, which we should have filled in the next week or so.  Alexis, as Assistant Director, assumes the administrative duties of the Assistant Director, while the Principal Planner is the main contact with the Zoning Commission.

“I asked Alexis if she was interested because Alexis is a good thinker and problem solver and is very good at working through process questions, which is important as we shift to more online permitting, as well as streamlining our processes.  The second significant reason is that a major focus area for us  going forward will be dealing with things like resiliency and impacts of sea level rise.  Our  first response to that was repositioning the former Site Planner position to the Land Use Planner, changing the focus from processing application and site planning, to thinking about environmental issues in the land use process.  The Land Use Planner will be working more and more with Alexis as well as other  staff on these issues, which will be a significant part of our long-term planning going forward.

Diane Lauricella noted Cherichetti’s advancement at this month’s meeting of the Mayor’s Water Quality Committee. “There might be a chance to have an environmental spin on more of the zoning,” Lauricella said.

Coastal Area Planning Consultant Geoff Steadman agreed that it might be good to “encourage and support a more active role by the Conservation Commission.” Not only does the Commission function as an inland wetlands agency, but it State-authorized powers, “the ability to make recommendations and conduct studies on all matters concerning the land and water resources of the city,” he said.

“There are different ways to get more environmental light on things by looking at structure,” Lauricella said.

Cherichetti is still staff member to the Conservation Commission. At Wednesday’s Commission meeting, Commissioners teasingly congratulated her for her “new window,” shown behind her during the Zoom session.

Cherichetti has been working in an office without windows, as environmental officer.

Norwalk had collected $180 million from taxpayers as of Oct. 7, or 51.42 percent of this year’s levy, Tax Collector Lisa Biagiarelli told the Common Council on Tuesday, as she and Chief Financial Officer Henry Dachowitz delivered the latest upbeat report on collections after the COVID-19-inspired grace period ended.

“It is slightly less than what we had collected through the end of October last year, but we still have the rest of the month to go,” Biagiarelli said.

So why didn’t she?

“Personal reasons. Not ready yet,” Biagiarelli wrote to NancyOnNorwalk. “That’s a life altering decision. For me, it’s not something I can rush and decide within a couple of weeks to meet a deadline. There has never been a time since I was a teenager that I did not work. I’ve never not had a job.  Up until a few years ago I used to say I’ll never retire, but I no longer say that.  I do plan on retiring – just not yet.”

John Levin, a Republican known partially for wearing Hawaiian shorts year-round to almost every locale, has been appointed to the Conservation Commission.

The resume Levin submitted to Mayor Harry Rilling erroneously says he was born in 1915 and notes that he served in the U.S. Marine Corps from 1976 to 1979, then graduating from Yale College in 1984 with a bachelor’s degree in economics and mathematics, then achieving a Masters in Business Administration from Stanford Business school in 1987. It describes “Assorted jobs with increasing responsibility as securities research analyst and portfolio manager for both sell-side and buy-side firms in Connecticut and NYC,” and says that he and his wife got married on the front lawn of their Chestnut Street home after buying it in 1991.

He’s been self-employed as an investor since 2006 and serves on three Boards:

“No arrest record. No expungements,” it states. “Anything else?”

The Council vote Tuesday to approve Levin’s appointment was unanimous.

“Mr. Levin’s resume certainly shows he’s well qualified to serve on our Conservation Commission,” Council Minority Leader Thomas Keegan (R-District D) said. “But I believe it’s what doesn’t show up on Mr. Levin’s resume that stands out. I think it’s the fact that Mr. Levin cares very deeply about our city. And he wants very much to serve the public. And you Mayor Rilling said it best. You said, ‘I think he’ll do a real good job.’ And I agree.”

Congrats to Alexis. She is a tremendous asset to the city. Well deserved promotion. Lisa makes $150,000 a year as tax collector according to city records. I wouldnt retire either!

I wanted to set the record straight on John Levin. Those are swim trunks, not Bermuda shorts, evidenced by the lack of knee-highs! There, it’s out in the open now. Congrats John.

If Lisa keeps working then Norwalk keeps collecting; which is good for all of us who pay our taxes.

Good news all around! Congratulations John and Alexis, and what a relief that Lisa is staying with the city, as she is a wealth of experience and has served Norwalk so well.

Thank you Lisa B. Congratulations to all promotions well deserved.
Stay safe and best always
Karen and Dan Lyons