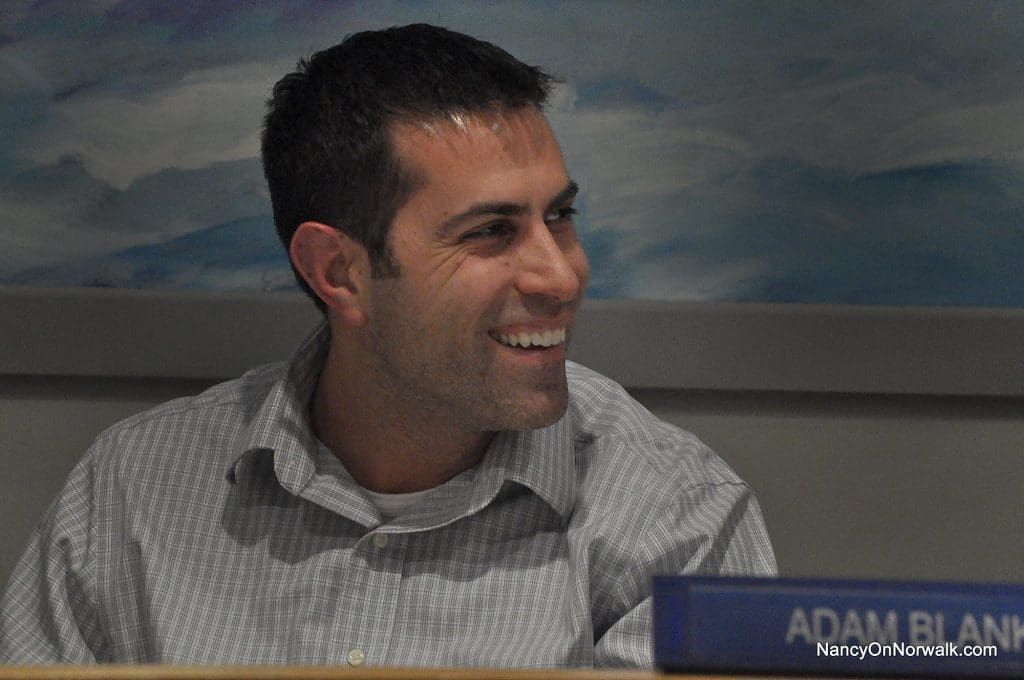 Former Zoning Commission Chairman Adam Blank is set to be appointed to the Redevelopment Agency at Tuesday’s Common Council meeting.

Mayor Harry Rilling does not generally put forward appointments unless he knows he has the votes for confirmation, and smooth sailing.

Blank left the Zoning Commission in January, ahead of the expiration of his term in July.

“I’ve had a long run, it’s time to give someone else the opportunity,” Blank said in November.

Blank was not available for comment, late in the evening.

The objections stems from the move to build a BJ’s Wholesale Club at 272-280 Main Ave., and Blank’s unsuccessful attempt to change the Zoning on Main Avenue to prevent a big box store from coming in.

“We are very concerned to hear that Adam Blank is being brought up for Redevelopment, given that he was part of the process, trying to block the permit the first time, did nothing about it while he was on the Zoning Board,” Dunn said.  “I am sure there will be many of us (speaking to the Council).”

“I got significant push-back on this as staff had some studies that would suggest that having multiple smaller retail stores creates more traffic than a single big box user,” Blank said in a September email to NancyOnNorwalk. “I never came close to having support from the Commission to pass a reg. change.”

Morris: Connecticut will have toll roads

State Rep. Bruce Morris (D-140) had the floor to himself at Monday’s Democratic Town Committee meeting, as the only legislator present to give a legislative update.

“There is an appetite for tolls. The biggest challenge right now is how long it would take to get it done,” Morris said, responding to a question.

Some think it could be accomplished in 1.5 years, like Massachusetts did it, and some think it would be three or four years, he said.

This would be tolls spread throughout the state, not a border toll, he said.

“However, there’s a strong likelihood that tolls are definitely going to happen,” Morris said.

It would be done like it’s done in New York, with drive through tolls, not big toll booths, he said.

After the meeting, Morris confirmed to NancyOnNorwalk that he meant EZ-Pass exchanges.  Legislators met last week with Connecticut Department of Transportation Commissioner James Redeker to discuss logistics, he said.

There’s talk of finding a way to compensate people in border towns, perhaps with a break on income taxes, he said.

“We will begin to get money for all these trucks that travel through our state,” Morris said. “We want to encourage businesses to come here. We have to build and invest infrastructure. To do it on the backs of Connecticut taxpayers is not sustainable and it’s not buildable, so this makes sense.”

A state judge ruled last year that the state’s ECS formula is irrational and should be revamped. Connecticut has appealed that ruling but legislators want to address the situation, Morris said.

“There are three bills that are moving through committee,” Morris said, cautioning that no one knows what the state budget will look like.

“However, the conversations in every Committee I have been in, what we are talking about, is that all the legislators are looking to get ECS done,” Morris said. “Especially the predominant model that is being looked at right now, that provides all the right logic, all the right rational for ECS, would really benefit Norwalk in a phenomenal way.”

Although Education Committee Chairman Andy Fleischmann (D-West Hartford) has been adamant that the grand list should be a major component of the ECS formula, based on court rulings, Morris said the arguments that have been made have moved the needle.

“We would have to increase the amount of money in ECS to make this work out proportionally…. We’ll see how that works,” Morris said. “But if we walk away with that out of this session, because everything else isn’t going to look that great, that would be a good thing for Norwalk at the end of the day.”

Rilling, speaking to the DTC, said he had been in Hartford on Monday to meet with State Senate President Martin Looney, along with other Democratic mayors of large Connecticut cities.

“We are cautiously optimistic that” Connecticut is not going to force municipalities to pay one-third of the teachers pension payments, Rilling said, referring to a proposal made by Gov. Dannel Malloy to have Connecticut communities pay into the Teachers Retirement System.

Norwalk is hoping that payment will not be required, because it doesn’t want to have to tax Norwalk Hospital, Rilling said.

Malloy’s proposal included balancing the city’s contribution to the pensions by requiring Norwalk Hospital to pay $9 million in property taxes, which would then be balanced by a break from the state.

“We talked about property taxes and how regressive that tax is,” Rilling said, of the meeting with Looney. “… They are kicking around a lot of different ideas, whether we get more from sales tax, do something with the income tax.”

Then he addressed the uncertainty.

“From what they said today, the odds are that unless they get that budget in place by June 7, or unless as late as June 30th, we are not going to know what the city’s situation is going to be,” Rilling said. “It could go into October. But we are working together, I was up there with several other Democratic mayors from big cities, and we had a lot of back and forth and sharing about how we could make it better with the state in order to increase, perhaps, municipal revenue and decrease the need to tax our citizens so much.”

District D is also actively recruiting and gearing up for the fall election, Joe Tamburri said.

Tolls in Connecticut? Another way to tax the middle class working folk….

ECS benefiting Norwalk? Not while Andy Fleischmann (D-West Hartford) is still the Chairman of the Education Committee. While Norwalk stands to improve the amount of funds, Hartford would see a drop, something that won’t happen under Fleischmanns watch.

Of course there is an increase in Democrats in Norwalk! They are fed up with the ones running things now!