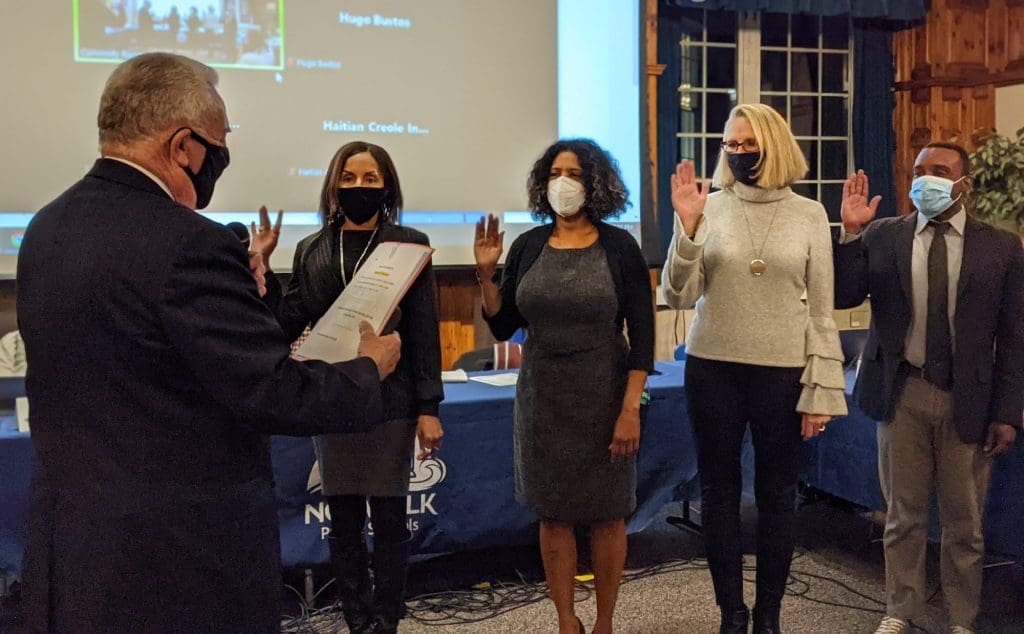 Four Board of Education members were sworn in Tuesday for their four-year terms: Colin Hosten, Kara Baekey, Sheri McCready Brown and Janine Randolph, all of them Democrats.

The executive committee did not change: Hosten was reelected chairman, Diana Carpio was elected vice chairwoman and Godfrey Azima was elected secretary.

This was done in a very non-contentious way: Erica DePalma nominated all three at once. There were no other nominations, and Mayor Harry Rilling declared the three has having won the election.

‘COVID is a factor’

NPS is seeing more retirements mid-year among its teaching staff, or, “more people who are just deciding to leave employment mid-year than we typically used to see,” NPS Chief Financial Officer Thomas Hamilton said last week. “It’s hard to know exactly what the drivers of that are, and sometimes it’s very individualized decisions. But certainly COVID is, you know, is a factor, no doubt about it.”

Hamilton said it in the context of budget funds that aren’t being spent.

“In any year, recruiting is a year-round process as we look to fill both expected and unexpected vacancies, whether those are due to retirements, family leave, moves out of the area, or other reasons. Our HR team has a proactive recruitment plan that includes job postings on both education and general job platforms, such as CTReap, Indeed, Handshake and LinkedIn; national listings in education journals; advertisements throughout the region; outreach through local and national universities; and our own job fairs.”

The late Mike Barbis has been honored in multiple ways since his sudden death in September. His seats on the Board of Education and the Sixth Taxing District remain open.

While the Democratic Town Committee will appoint a new BoE member for District E, two sources say the Sixth Taxing District seat will go to someone chosen by the remaining two 6TD Commissioners.

No more than two Commissioners may be from one political party, 6TD says on its website. Tammy Langalis, a veteran Commissioner, is a Republican and independent candidate Andy Meyerson was just elected to the seat vacated by John Igneri.

Priscilla Feral, a Democrat who ran against Meyerson, sees a problem. She wrote:

“There’s a bizarre rule that gives a Republican 6th Taxing District Commissioner and Andy Meyerson the right to choose a Democrat to replace their friend, Mike Barbis, who always disparaged Democrats.
“If the Board of Education has to go to the DTC to fill his seat, the same should be true for Commissioners. Otherwise this feels like a way to sabotage Democrats.”

It’s reportedly in the City Code that taxing districts operate this way. When the First Taxing District needed to replace the late Marija Bryant, the remaining Commissioners voted to select a new Commissioner.

Langalis did not reply to an email asking about the situation.

Ferel said the charter needs to be revised. She wrote:

“The Commissioners could pick Nora King, a registered Democrat. Here’s her Facebook page on Nov. 2nd.

The Sixth Taxing District is scheduled to meet Wednesday. The agenda includes “Notice of a person to fill Mike Barbis’ remaining term” under new business.

Commissioners oversee a budget of about $2 million a year.

Following an autopsy, the state medical examiner’s office determined Barbis’ cause of death was atherosclerotic and hypertensive cardiovascular disease.

To whoever wrote the charter for picking 6th Taxing District Commissioners: Kudos for actually having the foresight to think compromise is a great way to govern!
Today’s discourse has gotten so polarized that the idea of compromise is foreign to many. The idea of elected officials having to work to find a solution is a good thing.
I found it amusing that Board of Ed officials executive committee was elected in a “non contentious” way.
It made me think the rubber stamp they use must be getting dry..

Not surprised. Lots of teachers heading for the exits. Quite of a few of my colleagues changing careers. Not really worth it with what teaching has become. Nationally seeing the same trend.

Readers concerned with standards of public education in the City of Norwalk may want to access the website of the CT Dept of Education to see how Norwalk ranks in meeting CT Edu Dept performance standards for grads. The Edu Dept site shows the majority of Norwalk grads do not meet Edu Dept standards for math and the sciences. Nor do the majority of City grads ever secure 4 yr college grads. Our public school outcomes continue to contrast sharply with those our high performing surrounding towns. Broadly speaking we match salaries but secure very different outcomes for our kids.

Our BOE has not addressed these marked differentials publicly. Nor announced plans and goals for improvement. Nor did these performance differentials receive attention during the recent election campaign. City property owners who pay upwards of 90% of the City’s budget are financing a public school system that has student performance issues without visible signs of improvement.

Some of us old timers remember when Norwalk had a well recognized public school system that attracted new home owners. It’s why we moved here many decades ago. Lengthy lists of scholarships and acceptances to first tier colleges received by our graduating students were listed in the local newspaper. Back then most of our teachers actually lived in our City.In those days our School Supt was paid about $50k. Now the position pays $300k +. For a very different set of student outcomes.

The person who should be explaining the 70 vacancies isn’t the finance director; it’s the person who is in charge of HR. And by the way, posting jobs on websites and in publications, while necessary, isn’t a “proactive strategy.” It’s a clerical activity. Job fairs are also not especially creative.

The way to recruit is to ensure that the places where the prospective teachers and other staff will be working are great places, with supportive superiors and colleagues, with a positive environment. Yet, morale is suffering in much of the district.

It’s easy to blame Covid and to compare Norwalk to other districts that have many vacancies, but those comparisons are only an excuse that does nothing to solve the problem. How is it helpful to my child to know that there are other school districts with as many, if not more, vacancies? There is a very generously paid HR director who ought to be able to step it up and provide the leadership to get this done. There is a superintendent who is even more generously paid and who has hired untold numbers of highly paid administrators to lead the work of the school district. Are there data to show that the investment is working?

Students are either the beneficiaries of great school system staffing, or they are the victims of ineptitude in running a school system. Enough with the excuses.