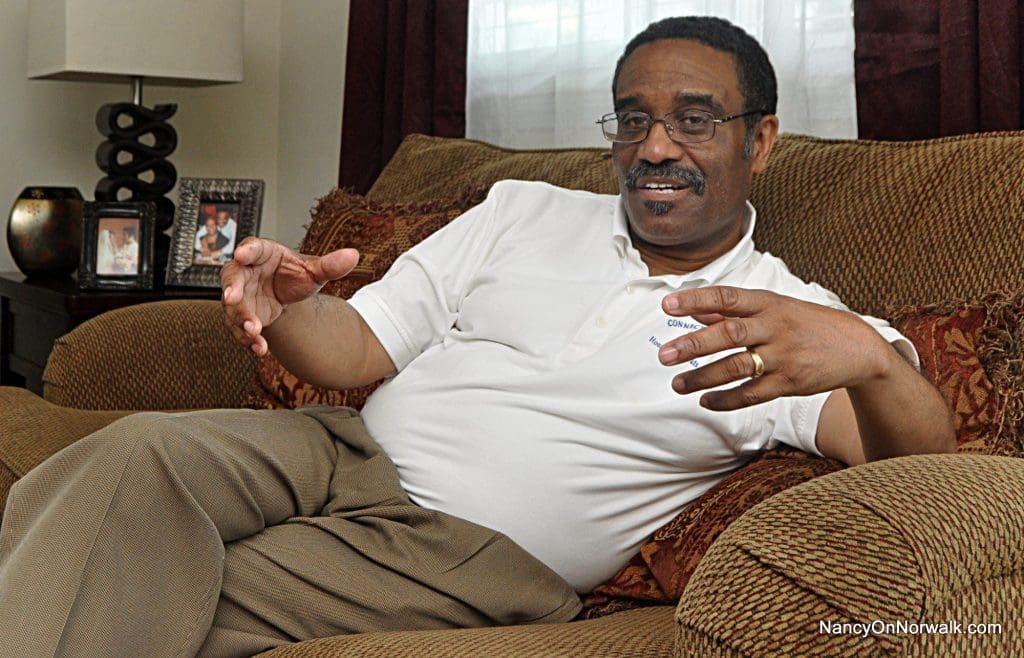 Unaffiliated Mayoral candidate Lisa Brinton has sent out an email blast announcing that on Saturday she received a Master’s Degree in Public Administration and Policy from American University in Washington, D.C. 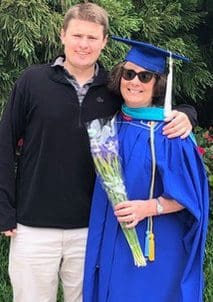 “After her elder son enrolled at George Washington University in the fall of 2016, Brinton felt inspired to continue her own education in public service,” the announcement states. “Her interest in pursuing Public Administration was the natural byproduct of her decade of political activism in Norwalk.”

“I learned a lot, and made some great new friends and colleagues working in public service from around the country,” she’s quoted as saying. “We exchanged stories about administrative, operational and policy issues in our respective cities.  Norwalk featured in many of my case studies.”

Brinton is seeking to unseat Democratic incumbent Mayor Harry Rilling and appears to have competition for the Republican endorsement from lifelong Democrat Darnell Crosland, who recently switched his party affiliation to Republican after pitching himself to the Republican Town Committee as a Mayoral candidate.

Crosland promised to file papers with the Town Clerk by May 3. As of Friday, he had not done so. He did not reply to a Wednesday evening text message.

Rilling on his campaign Facebook page states, “In 1991, as a Graduate Fellow I earned a Masters Degree in Public Administration with a concentration in Labor Relations and Human Resource Management from the University of New Haven. I am also a graduate of the FBI Executive Development Course.”

“In addition to my duties as Chief, I also served on numerous boards and commissions locally and throughout the nation. … I presided as Chairman of the Mid-Fairfield Substance Abuse Coalition (MFSAC). I was past President of both the Fairfield County Chiefs of Police Association (FCCP) and the Connecticut Police Chiefs Association (CPCA),” Rilling states on the Facebook page.

Brinton’s announcement states that her “diverse private and public sector background uniquely positions (her) to tackle inefficiencies at city hall.”

On Tuesday, the Common Council approved the last piece of Rilling’s reorganization of top City administrators, creating a Chief of Community Services.

“It’s critically important that we design a system of management within the City of Norwalk that is going to help us run the city in a professional way,” Rilling said.

Board of Education member Bryan Meek addressed the Common Council on Tuesday, beginning his remarks with, “I just want to thank you Mayor, thank you Council, want to applaud the Council subcommittee of Land Use for being cost conscious about a lot of the future projects we have underway.”

Meek is Brinton’s treasurer. His 4-year Board of Education term ends this November; although he’s been known for sharp commentary, his tone has become much milder in recent months.

The Finance Committee Chairman was there to suggest that the Council reconsider its decision to renovate the Columbus Magnet School building instead of demolishing it to build a new school.

Former State Rep. Bruce Morris (D-140) was once again traveling to Hartford in April, speaking in opposition to marijuana legalization at three events.

That resulted in a Connecticut Post story that said:

“Morris started using marijuana in high school, before experimenting with harder drugs while attending UConn, he said. Morris went to college wanting to become a lawyer, but a terrible trip on LSD shook up a young Morris and eventually led him to find God, he said.”

Morris in 2014 told NancyOnNorwalk that he had, as an eighth-grader, considered being a priest, but as a high-school grad went to the University of Connecticut with the intention of being a lawyer.

There he had a spiritual transition, he said.

“I would rather not go into detail about it, but let’s just say I had a miracle where God saved my very life and my mind,” he said.

Asked on May 1 if he wanted to tell NoN readers anything in addition to the Post story, Morris explained his opposition to marijuana legalization.

“My position is that the negative impacts of marijuana normalization upon our society,  far outweigh the much needed economic benefits the bill seeks to provide,” he wrote. “Moreover, the state should have sought such economic benefits in distressed communities during the last 20-30 years and should pursue such going forward – but with a different revenue source.”

His full thoughts were published May 5 in a letter to the editor.

Mellodye “Sweets” Ragin was recently made a Justice of the Peace by Norwalk Democrats.

Ragin is running SoNo Entertainment and Recording Studios on her own since the unexpected and sudden death of her husband, John “Dolo” Ragin, in September 2017. The pair were honored by the Norwalk NAACP in February in 2017.

Norwalk has done better under other Indepentdent Party leaders before. With our apparent choices I’ll vote Independent!

Kudos to former Rep. Morris for speaking out against legalizing marijuana. Reportedly the faculties of all CT’s medical schools oppose legalizing the drug. Just as alcohol abuse can impair faculties when driving so too with marijuana. So we’ll all be on the receiving end here. What about Norwalk’s elected Legislators views ? Sitting on the fence ? Hoping we won’t notice ?

Congratulations to Lisa Brinton on her recent Masters which will undoubtedly give her a fresh perspective on public policies and administration. We are in 2019 and we need leaders educated for the next generation of public management. They need to be nimble, energetic, and possess fresh new perspectives and visions. They need a willingness to let go of old stale ideas and embrace that we live in a rapidly changing world where top-heavy and expensive local government with one track mind is just not good enough to provide a sustainable future.

Also, this article glaringly leaves out that Ms. Brinton brings to the table 30 years of business management spanning three continents with multinational corporate giants like AT&T. Norwalk needs to attract small and medium businesses with better paying jobs. We need a mayor who understands that City Hall should not be the number one employer in town with all the good salaries well above Norwalk’s median income. We have a fantastic city with great potential that is being squandered by an administration that only understands how to attract fortress apartments with huge tax breaks and blight designation. We need a mayor with a broader vision and understanding of business to attract businesses. We need a mayor focused on lifting Norwalk’s median income by providing good paying local jobs instead of cramming commuters into big box apartments or worst, having taxpayers subsidize expensive “luxury” rents.

Only when this happens will Norwalk be in a position to lower property taxes in relation to property value making this city a sound investment for residents.

Being polite when addressing our governing body isn’t an endorsement. We can disagree on things and be respectful at the same time. For some of us, the city has more meaning than click bait.

Congratulations Lisa Britton on receiving your Master degree! After being a wife / mother and a career woman this is a great accomplishment for anyone ! Cant wait till you become Ms Mayor of Norwalk !

Congratulations Lisa, now it is time to campaign. You have a long road ahead and need to get out and reach people, you need to let people know how you are going to solve the many problems and issues Norwalk is facing. I would love to see you as the next mayor but I am sad to say so far I have seen little to no real meaningful getting out talking to the people because I want to win campaigning. Maybe I just don’t see it and it’s just me. I need to know how you are going to solve the many issues of Norwalk that you identified we have and I agree are big issues in Norwalk. Thanks and good luck!

@ Al Bore, I will be quitting work in a few weeks and starting my door knocking in June. Heading to my own son’s graduation this weekend! I’m out there, perhaps not as much as the mayor and the press doesn’t report everything I do. However, as we have witnessed this past six years, high profile visibility and photo ops don’t necessarily equate to action or what is good for Norwalk.

Our problems won’t be fixed overnight, but it’s time to stop the secretive, punitive political culture that has dominated Norwalk for too long! Party loyalty must give way to city loyalty and putting residents first! That requires a mayor that promotes an open and transparent culture. Right now, we don’t have it! Just our campaign names -Rilling for Mayor vs Lisa For Norwalk highlights our personal style and priority differences.

Two big items I would pursue, include working with the governor to re-examine the Walk Bridge. There has already been some back door diplomacy on the part of those of us who seek a less expensive, intrusive and disruptive project to our city. Resolving Poko transparently, without 100% affordable housing and without wasting hundred of thousands of dollars is another.

I would think the fact that I respond publicly, should be the biggest reform indicator that contrasts the difference between this mayor and how I would hope to inspire others. I am happy to discuss other specific issues you might have – please email me directly, [email protected]. Thanks!

Thank you for your reply and my constructive criticism is because I want to see you win this time for the reasons you state above. I also have a big problem with the overbuilding of Norwalk which is causing overcrowding by packing too many people into this city. We are allowing to many apartment buildings and now were going to add micro apartment buildings, enough already. Make Norwalk a great place to live not a stomping ground till you figure out where you want to buy a house and raise a family. I can’t breath anymore it is too cramped, more open space what happened to the Norwalk skyline it’s gone.