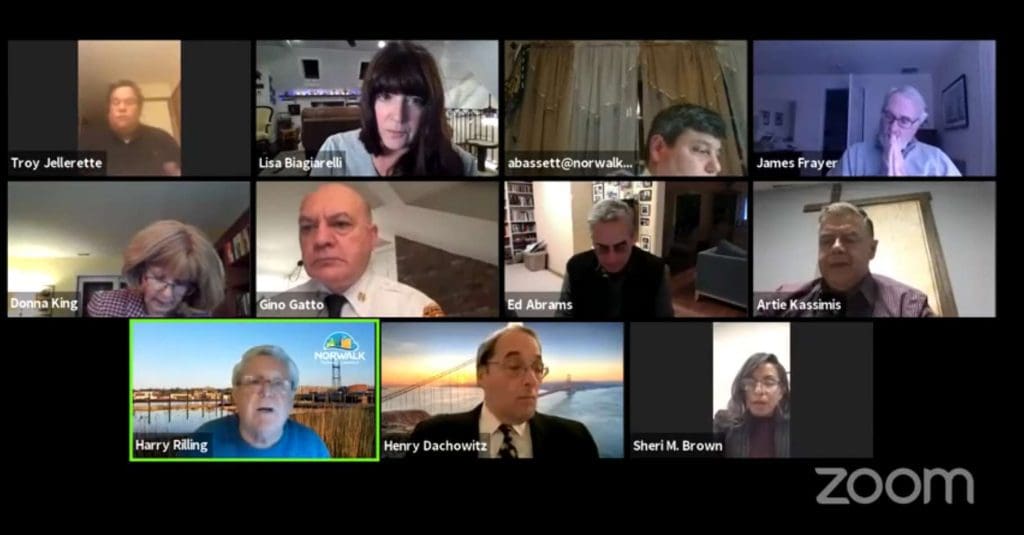 Mayor Harry Rilling has instructed City departments to shave their budgets for the upcoming fiscal year by .5%, which equates to cutting $5,000 from every $1 million they have planned to spend.

This will further lower the appropriations cap set by the Common Council, which was $1 million lower than recommended by Chief Financial Officer Henry Dachowitz.

“We think this is something very doable,” Rilling said Monday to the Board of Estimate and Taxation, noting that the request for a plan B was “a little bit premature” given that the BET will be meeting with department heads soon to comb their budget requests.

So, is this intended to provide leeway for education funding?

“Actually, I hope reduce expenditures wherever possible,” Rilling wrote Tuesday. “My request to department heads was to spread reductions across the board and to not exceed the cap on the budget set by the Common Council.  The .5% reduction calculates to $5,000.00 for each $1 million allocated.”

It’s been eight months since Rilling and Norwalk Chief of Social Services Lamond Daniels announced that the City was forming a permanent Equity and Justice for All Commission, and many people are frustrated that the work has not yet begun.

The holdup has been the desire to hire a consultant. Rilling told the Democratic Town Committee on Feb. 15 that a seven-member panel was down to two finalists for the work, and it looked like they’d be making a decision soon.

On Wednesday, Rilling said, “We will be making an announcement in the very near future.”

Back in June, Daniels emphasized a need for “experts at the table,” the reason behind the plan to issue a request for proposals for organizations and individuals who have a proven track record of doing this type of work. He also said that bringing in a consultant will help deliver on the Mayor’s commitment to this and help bring in research and data.

“I want someone to come in with a fresh set of eyes who can listen,” Rilling said in June. “I want neutrality. We’re going to make sure this is fair, honest and objective.”

In October, Rilling said the City had gotten 25 inquiries on the RFP, but only two responses.

“We didn’t feel that either one of them met our needs,” he said. “So we reached out to the other people that made inquiries, but didn’t respond. The reason they didn’t respond, unfortunately, they were all asking pretty much the same question: ‘How much money do you have to spend?’ And I don’t like to answer that question. Because if we say we have $500,000, we’re going to get, everybody’s going to come in around 495-499.”

Norwalk had gone out to bid with “a ballpark figure range,” he said. “We expect that we will be getting a quick turnaround time. I have a team put together that are going to go over the solicitations, we’ll look at the applications. And then they’ll get narrowed down.”

The $1.2 million refund awarded to Waypointe in January after an assessment appeal was an unusual circumstance, Finance Department officials said.

The property sold after the valuation date and if the assessment appeal had gone to court the result would have been a lower number than the parties had agreed to in negotiations, Tax Assessor William Ford told Common Council members.

There were 400 appeals filed on the 2018 revaluation and “we are taking ones to trial that we believe that there’s no basis for a reduction,” Ford said. “…We don’t anticipate and a large number of these high number cases.” Most of them center on assessments in the $200,000 range and “when it boils down to actual tax dollars, it’s not very significant.”

Corporation Counsel Mario Coppola said he’s in charge of tax bill defenses in Westport, Weston Wilton, New Canaan and Easton. “I do all the major cases for Trumbull, which are, there’s a few properties that are over $100 million in value,” he said. “…In the higher value cases, this is as a result that you do see quite often where when you make a change, it results in a significant tax savings.”
He had recently settled one that resulted in a $1.2 million savings to the taxpayer over a five-year period, he said. Ordinarily, these things don’t get a lot of attention because they don’t come to the legislative body for a refund, instead a credit is issued for future years.

Waypointe got a refund because the property sold and the former owner isn’t going to be able to tax advantage of a credit, Ford said.

“Quite honestly, in Norwalk, I think we probably do a more extensive defense, quite often, of the appeals, we do have the benefit of having in-house counsel that’s not billing by the hour,” Coppola said. “So we do have some advantages in within Norwalk in the system that we have.”

The Finance Department builds the credits into its budget, Chief Financial Officer Henry Dachowitz said. There’s also a reserve in the budget “on the assumption that we may have cases where we have to distribute cash. I check those numbers with Mr. Ford to make sure he feels based on the review of the litigation it’s adequate.”

Dachowitz said the five-year cycle between revaluations results in lower reserve numbers in years four and five and while $3 million was budgeted in years one and two after the 2018 reval, in the coming year “we’re going to keep it at two and a half million, just because he inherited 400 cases. And we just want to make sure that the budget is protected.”

The next revaluation should be quite interesting. With commercial values lower these days and residential higher I would expect massive increases in residential property taxes. But hey, why plan ahead? Let’s just keep spending..

Equity and Justice for All Commission. Does this strike anyone as concerning?

When I hear things like this, I wonder what is the real purpose. Reason – Equity comes at the expense of Equality since it is predicated upon the viewpoint of the Equity decider, not on social norms.

Therefore, Equity by default is biased and will result in picking winners and losers. Sure, it starts out altruistically, but power like has a history of corruption.

We have a great example of this in POKO – brought to us by another unaccountable, powerful appointed commission that, despite being a “force for good” has ridden rough shod over the Norwalk taxpayer in the quest to benefit the few.

So, who appoints the Equity and Fairness Commissioners? What is their mandate? What are their powers of enforcement? Will those powers infringe on ordinary citizens constitutional rights? Who funds them? Who holds them accountable? Term length? Is this legal? Etc., etc.

When you ponder those questions and the POKO experience, you begin to see the problem. Equity is subjective and murky, conversely Equality is objective and transparent.

I think we are mistakenly addressing the inherent inequality in society via the path of Equity which will inevitably result in unforeseen unintended consequences. Welfare and failing school districts are great examples.

Can I suggest we use the teachings of Dr. Martin Luther King, Thomas Sowell, Shelby Steele, Walter Williams and others as the standard. Perhaps revamp the RFP language by swapping equality for equity and rename it “Equality and Justice for All Commission”.

Michael, I see your point, to the degree that when a municipal body is charged with correcting societal inequity, there is a potential for over correction, systemic corruption, etc. Yet I find it hard to decide which is more hopelessly idealistic – that we can ever achieve true equity through government controls, or that would could ever be truly equal under the eyes of the law without it. The problem is that our societal “norms” are themselves unequal, depending on your name, your skin color, gender, tax bracket, access to education, access to health care, and many other factors. I will say that when it comes to the economics, I am pretty conservative, libertarian, and a laissez fair capitalist, but socially, I’m not sure 100% hands-off is the right approach. That said, I believe there is good intent to forming this commission. I certainly hope it works out for the best.