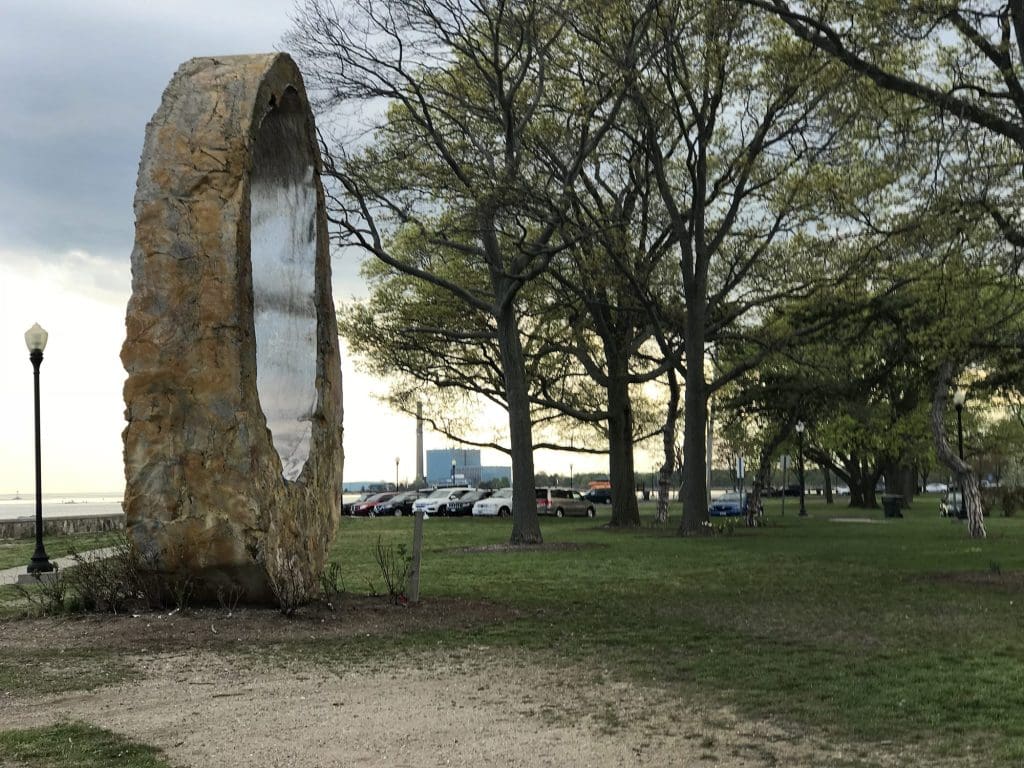 Calf Pasture Beach in May.

NORWALK, Conn. – Some Norwalk political developments for you:

No hunting at Calf Pasture?

Mayor Harry Rilling and Interim Recreation and Parks Department Director Ken Hughes told NancyOnNorwalk they had not heard anything regarding the legislation.

Duff did not respond to an email inquiry asking for comment.

Duff’s legislation is Senate Bill 7 and was referred to the Joint Committee on the Environment on Wednesday. It would “designate Calf Pasture Beach in Norwalk as a wildlife refuge but permit fishing in such refuge.”

Under state statute, hunting is prohibited in a wildlife refuge. Birds are protected and dogs are not permitted, according to the statute, which reads:

“I have not had any discussion on this with anyone,” Rilling said in a Thursday email.

“This is the first I have heard about this,” Hughes said in a Friday email.  He said he’d contact Duff.

NancyOnNorwalk asked Hughes for an update on how the wildlife refuge status would affect the annual fireworks display, kayaking or sailing.

Huhges on Friday evening said he’d spoken to Duff.  “He said the bill is currently only a concept and they did not delve into that sort of detail yet.”

REdApples not available to be read

Lisa Brinton’s REdApples website, which since March 2010 has featured a trove of statistics regarding Norwalk education, is not currently available.

The homepage states, “This Site is Being Redeveloped. Expected Completion Date – January 21, 2019”

Brinton is the only person who has announced a candidacy to be Norwalk Mayor.

Brinton in an email explained:

“Red Apples has been dormant for several years, and has just served as a data base of record.

“Anyway, the server that contains several of my website domains was hacked, placing a bunch of Japanese ads in front of the websites.  My web guy adding additional security and then reloading.  Not being updated with any new information.”

NancyOnNorwalk asked Brinton if she was planning to notify any authorities about the website breaches.

She wrote back, “No. It’s a storm in a tea cup. This is the new ‘thing’ for teenage hackers to do. Just tightening the security. It’s like a title page in front of my website. Annoying, but preventable :-)”

Metered parking on Wall Street: an idea whose time has come

Wall Street is set to be revamped to include angled parking.

Brescia told NancyOnNorwalk that angled parking would begin in July; minutes for the Nov. 28 Parking Authority meeting show that it’s part of the 2019-20 fiscal year budget.

The angled parking plan has been around for at least three years. Brescia is quoted in the minutes as saying it hadn’t happened sooner because “one thing after another stalled all plans for progress including what to do about the T intersection of West Avenue and Wall, the POKO project and Head of the Harbor Project.”

The new configuration will include the return of parking meters, according to the minutes; meters were removed early in the Moccia Administration, about a decade ago.

The angled spaces will add parking spots. McGuire characterized this as not  “a whole lot of spaces” but said “the meters and the angled parking give the perception that parking is available.”

Visitors from out of town will walk up to the meters and see a diagram showing five parking options in the area, including the Yankee Doodle Garage, she said.

“I think when you have angled parking that slows the traffic down,” Brescia explained to NoN. “The traffic flies through the Wall Street area, just much too fast, … maybe that will help slow things down.”

The mediation with Citibank over the stalled construction at Wall Street Place, commonly referred to as “POKO,” is ongoing, Rilling said.

Citibank owns Wall Street Place, because it foreclosed on its construction loan with POKO Partners, the original developer. The City in June declared Citibank in default because it has missed construction deadlines. The company subsequently asked for a 180-day extension, which was refused on Oct. 2. Mediation began in December.

Norwalk has also cited Citibank for blight and the City on Dec. 12 notified Citibank that it owed $5,500 in blight fines, which would continue to accrue at $100 per day. The City took the matter to Stamford Superior Court on Dec. 28, with a complaint alleging that Citibank has not responded to the violation notices.

An application for a temporary injunction states that Citibank is also in violation of the Zoning regulations for unpermitted or illegal use of land, failure to construct the development and missing construction timelines. The injunction would order Citibank, under its subsidiary Municipal Holdings, to remedy the violations.

A status conference is scheduled for Feb. 4.

“We are looking to make sure that we move this forward without any further delay,” Rilling said Tuesday. “I think we are all a little frustrated that there’s been a lack of movement. Mediation is and can be an ongoing process. Yes, we are looking at arbitration. We are looking at whatever we can do to make this move forward. And there’s no reason why it shouldn’t. There is no reason why sensible, rational people can’t sit down and work through this.”

Norwalk Fair Housing Officer Margaret Suib sent an email blast last week with a link to an article titled, “Get out: Black families harassed in their own homes.”

“Hate in your home – when your neighbor, maintenance worker, landlord, or condo board harasses you, calls you racial slurs, threatens you, actually physically hurts you or your property because of your race, religion, ancestry, national origin, age, marital status, sexual orientation, family status, disability, gender, religion, gender identity and expression, lawful source of income, veteran status…

“If you live in Norwalk, contact me, Norwalk’s Fair Housing Officer to report such incidents of hate. There are steps you can take and we can help you. Everyone has the right, the legal and moral right, to live in their home, their neighborhood, without being subject to such hate, bias, housing discrimination.”

Harry talking about POKO moving forward: “there’s no reason why it shouldn’t. There is no reason why sensible, rational people can’t sit down and work through this.”

I am capable of sensible and rational. I have had no invitation to sit down. Sitting down to talk is cheap and easy. Lawsuits are expensuve, hard and time consuming and should only after talking has failed.

The city has refused to talk to me. I have no blight and I am eager to talk. Citibank is ignoring the city. Citibank has blight. Citibank deserves the lawsuit. I deserve talks.

Mediation was either total BS or not effective because 2 days later the city brought the hammer. Zoning and Building departments came down hard.

Nancy you should include the letters from zoning & building and the court papers.

There is no valid zoning approval and no valid building permit for POKO.

The process would literally have to start over just like a vacant piece of land.

The entire POKO Tyvek fiasco was initated and promoted by the very same unaulified Redevelopment scam artists who are currently promoting their latest debacle: $15,000,000 taxpayer money to build more apartments which the common Council is going to approve, public outrage notwithsnding.

Bob Duff-
Another report states “We’re trying to find the balance between those hunting and those using an urban park,” Duff said. “Moms taking their kids to the bus in the area don’t understand when it’s waterfowl season.”

How about just posting a sign detailing when it’s water fowl season?
Of course this If there really is a bus picking kids up at the beach for school.

To my knowledge there has never been an incident related to Duck hunting at Calf Pasture. Additionally, I along with countless others have used Taylors farm for Dog outings and haven’t never been affected by it.

Ban fishing also if you decide to do this.

@Otto Delupe – I recall hearing of a rower being grazed by ricochet during hunting season. It happens. There are plenty of people in the area, on the water and at the beach. We’ve been lucky so far…

“pursue” what about the dog company the city hires to remove the geese from the playing fields and other grassy areas at Calf Pasture. would they be illegal?