Mayor Harry Rilling’s page on the Raveis real estate site. Did he get a second job? 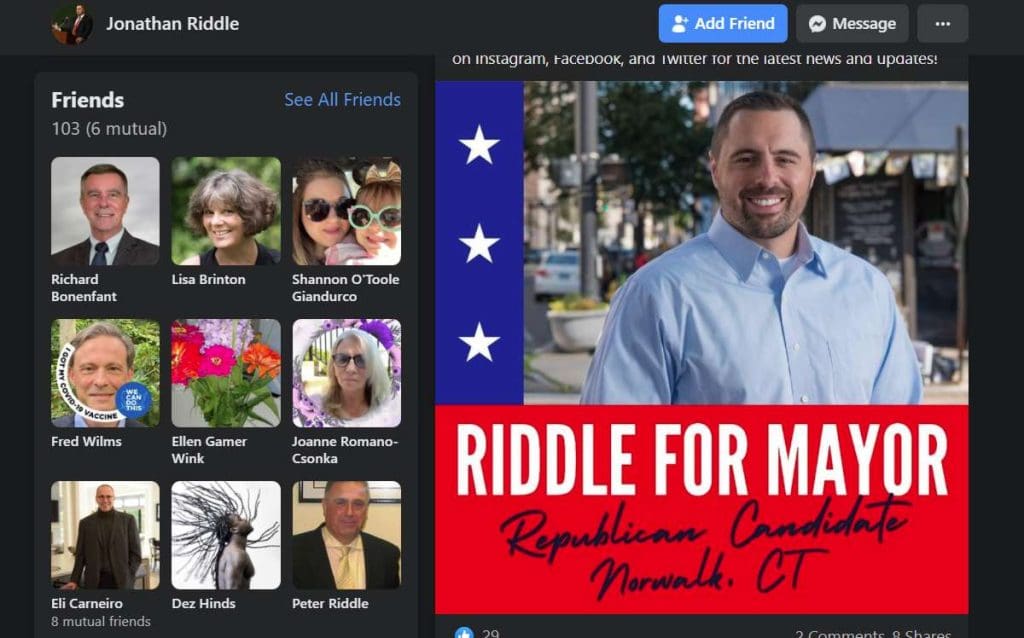 A riddle: Where was that photo taken? 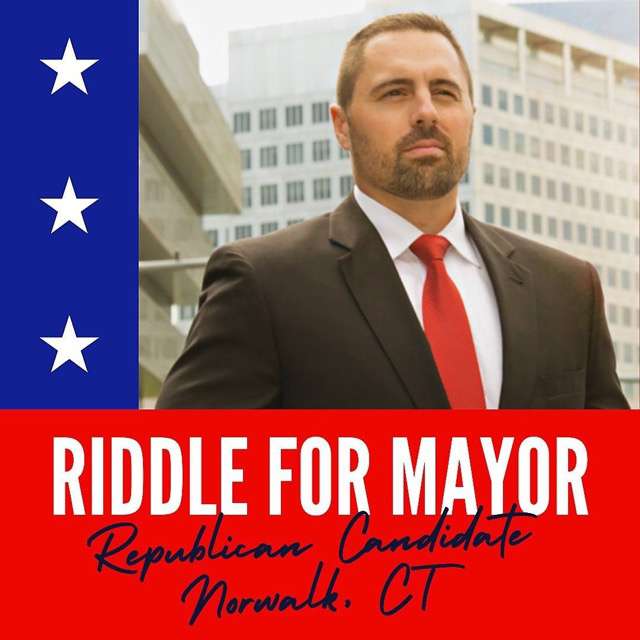 The original photo leading the Riddle for Mayor Facebook page.

The page first showed Riddle, who seeks to lead Norwalk, in Stamford. That photo was replaced with one that’s more generic; if the photos look familiar it’s because Riddle used them when he was running against U.S. Rep. Jim Himes (D-Greenwich) last year.

Riddle explained that the first photo “was the prominent picture of my Congressional Campaign and main picture used for my Congressional website.” He explained, “Rather than incur additional cost for new pictures, I used the images I own but changed it to a Norwalk-centric image that showcased my smile.”

The replacement photo was taken, “Somewhere in Norwalk 2 years ago,” he wrote. “I forget the exact location but it was taken during my Congressional Campaign.”

Riddle grew up in Westchester County, N.Y. The City’s land records online show that he’s been co-owner of a Sheridan Street condo since December, 2015.

The candidate confirmed Saturday that he “moved into Norwalk as both Resident and Homeowner on 12/10/15,” and, “This was my first home purchase.”

Who pays more in taxes? According to the City’s website, Rilling wins that contest:

Rilling’s owned that condo since December 2012, but his property taxes may be going up: he and his wife, Lucia Rilling, have been shopping for a home, he said in May. They’d like something bigger so of course there will be a bigger bill.

Rilling’s using his own real estate license to shop for a new domicile. He took a real estate class at Norwalk Community College after he retired as Norwalk Police Chief in 2012 and qualified for a license, but had it in “inactive” status for seven years. He reactivated it in 2019 for the home hunt. That’s the only thing he’s using it for, he said.

The Raveis real estate website advertises Rilling as an agent; although he’s the only agent without a photo, he has a Raveis email address and a Raveis page.

Rilling said he uses his license to scan the MLS listings and if he sees something he and Lucia might like, they drive by. Then if they’re interested they take a tour.

That’s it. No, not selling houses.

Raveis Norwalk managers didn’t answer a May 31 email asking why Rilling appears on the website if he’s not selling homes. The email also asked if Rilling is showing homes and if he’s sold any.

“Harry Rilling is a member of the Mid-Fairfield County Association of REALTORS® in Westport (MFCAR). He has been a member since 2015, and has an active license which will expire March 31, 2022,” Carol Heins, Associate Executive of MFCAR, said.

Rilling emphasized that he’s only shopping in Norwalk. He and Lucia have no intention of going anywhere else, but they’d like to entertain and have other reasons for wanting something bigger.

‘The most courteous thing to do’ 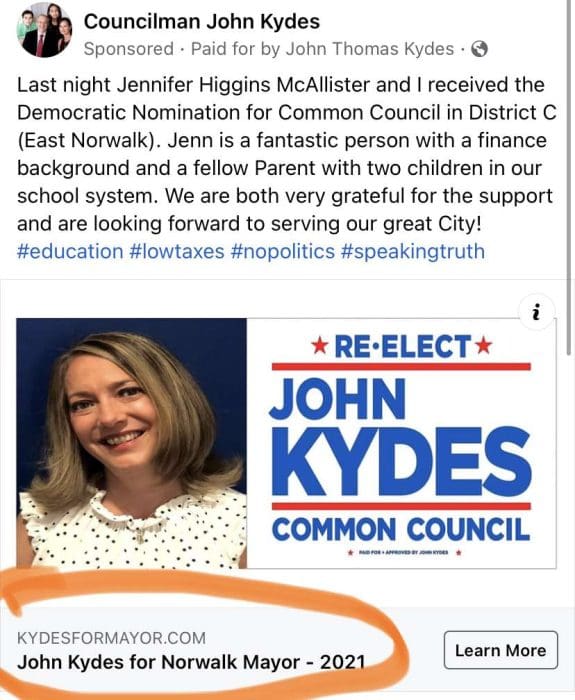 A John Kydes ad on Facebook. It was reportedly removed Aug. 3. (Contributed)

Common Council member John Kydes (D-District C), who is both seeking reelection this year and campaigning for a Mayoral run in 2023, recently posted a Facebook ad that some feel violated Connecticut campaign finance laws.

The July 27 post says it was paid for by John Thomas Kydes and touts the endorsements he and running mate Jennifer Higgins McAllister received the night before at the Democratic Town Committee meeting. At the bottom it includes a link to “John Kydes for Mayor – 2021.”

Kydes closed that campaign on March 31, dissolving his exploratory committee for Mayor this year and converting it to one for the election two years from not.

“I’d have to think using campaign funds to continually promote a nonexistent campaign to raise money is a campaign violation,” said Justin Matley, who alerted NancyOnNorwalk to this issue on Aug. 3.

Jenn McMurrer, who, along with Tyler Fairbairn, is challenging Kydes and McAllister for the endorsement, and Matley said the ad was online for about a week; Kydes took it down when they complained about it.

“We decided not to file a complaint with the Seec, rather reach out to him directly to solve the matter. We thought it was the most courteous thing to do,” McMurrer said.

Kydes did not reply to an email asking for a response to the allegation. Kydes has not responding to any NancyOnNorwalk inquiries since the recent article about comments made by his 2015 running mate, John Metsopoulos.

The primary is scheduled for Sept. 14. Norwalk Democratic Registrar Stuart Wells said Friday that he doesn’t yet have an estimate for how much the primary will cost.

Politicians have routinely used status as real estate agents to accept deals representing houses that would sell without any effort, which to me, always looked like an illegal contribution.

The Mayor isn’t paying property taxes on the home he co-owns with his daughter on Hunters Lane? Is the First Lady selling real estate? I wouldn’t blame them for having the Mayor help out, could be a good selling point to see the Mayor cares.

I’m not, not ever was, running for anything.

What a joke. First Riddle pens an anti-science op-ed suggesting salad and green tea will cure covid, then launches his campaign with a picture of himself in Stamford, then replaces it with a picture of himself in Bridgeport (and lies saying it’s “somewhere in Norwalk”), and bonus points – Lisa Brinton (Ms. I am not a republican even though I ran as one last election) is one of his few followers on Facebook.

Then you have Kydes, How sloppy – this guy wants to run a city but can’t even follow the most basic of campaign finance rules?

Riddle’s still running after last week’s embarrassment? And now this? What chutzpah. The guy thinks Vitamin D and exercise are reasonable alternatives to masking.

Normally, I’d agree with the Independents that sitting out this election probably makes the most sense – they’d only split the opposition vote and make a Rilling win more likely. But this guy’s a joke. Both Rilling and Riddle are already the height of objectionable to any sensible independent. Lisa, if you’re reading, just go ahead and throw your hat in on the off chance that the voters are done with these losers yet.

The only chance Riddle has of winning is if voters confuse him with Rilling and accidentally vote for the wrong guy.

@Baaa Baaa-bie Lamb. You’ve got mint jelly on the brain. Love the tough guys who post using fake names…..so impressed with your courage.

For the 100th time – Lisa Brinton ran for mayor in 2019 as Unaffiliated – who asked for and received the endorsement of the local R party. She is not a republican.

This distinction has been noted so often right on this blog, it’s remarkable a daily reader of NoN like bobby wouldn’t know that by now. Unless, he’s deliberately trying to smear what he fears.

Bobby bobby bobby – I know – little lambs don’t like strong, smart, INDEPENDENT women. But here’s a news flash for you: Norwalk has quite a few, and I think they are tired of the misogynistic mansplaining that drips from City Hall almost daily. Times up.

Surely there are more important concerns for the upcoming election. For example, how can more good jobs be secured to help reduce our long running 10% Poverty rate ? Or how we can improve our public school student outcomes so most grads meet State math and science standards ? Or how can we secure major businesses to help alleviate our property tax bills ?

Once again, showing that kydes is nothing more than a a political opportunist

Audrey, my friend… I second that emotion.

David Muccigrosso… Would’ve been interesting if Lisa Brinton had a third go, but competing against an entrenched Democrat incumbent with wads of special interest cash from out of town developers, attorneys and their family, friends and colleagues, is no easy task, and who can forget how Lisa was character libeled as a hateful racist by then DTC Chair Edwin Camacho and Bob Duff in their gaspworthy, coordinated smear campaign letters to the press in October of the 2019? That our Senator went so far as to broadcast his hit job on all his social media sites and on the Connecticut Senate Democrats website is disgraceful. These men kneecapped Lisa and did the Mayor’s bidding while he condoned their behavior why exactly? It took a special brand of corrupt cronyism for them to publicly humiliate this woman who ran a clean campaign. Who needs that abuse?

That DTC women condoned the dirty politics with either silence, or with posts on social media, is disturbing. How would they have felt if their Senator publicly dragged their names through the mud like that? Politics aside, women should stand up for a fellow woman who is being degraded by men who abuse their power. The DTC also mailed out false propaganda flyers (I still have one…) which aligned with Bob Duff’s lying drivel that a vote for Lisa is a vote for Trump. Acquaintances of mine witnessed DTC member, now Chair, Eloisa Melendez, at the polls, nonsensically and repeatedly telling residents that Lisa was a Republican. Those of us who read coverage here on NON, read her OpEds, and who followed or helped with her campaign, knew Lisa was Unaffiliated, but due to CT ballot rules and how she filed paperwork the previous go round, was unable to have her name on the U line. Ms. Melendez knew this, but nonetheless exploited the issue and intentionally misled uninformed residents. Norwalk’s DTC, which seems to encourage and reward duplicitous behavior, is in need of an ethics overhaul.

That John Kydes has announced he’s running for Mayor in 2023 and is collecting donations, essentially campaigning 2 years out, is entitled and opportunistic. Unfortunately, I can’t unsee how John Kydes behaved at the polls in 2019, where my friend and I and other poll standers witnessed him make fun of Lisa Brinton as she walked up to Marvin, gesticulating and saying, “Oh, God! Look at her! Oh, No, I can’t! I can’t look at at her!” His pathetic public display reminded me of the footage of Donald Trump making fun of a disabled reporter. Mr. Kydes was also heard talking about other candidates unflatteringly within earshot. His infantile behavior, which speaks volumes to his character, has me inclined to believe the gentleman who described similar behavior in a recent NON article which Mr. Kydes won’t speak to. Do we really want a Councilman, or a Mayor for that matter, who makes fun of his constituents? Do the DTC and Mr. Kydes’s running mate approve of this behavior? I’d love to hear a response here from DTC Chair Ms. Melendez.

Lisa Brinton was wise to focus her energies on resuscitatIng the Independent Party in Norwalk to offer an alternate slate of candidates for centrists who are fed up with the crony antics of this Norwalk D Party Machine, and who feel that positive change can be effected and our voices heard by voting to restore checks and balances on the Common Council and BoE. So long as Norwalk Democrats vote the row and continue to grant concentrated power to this particular DTC, with Bob Duff’s accomplice Edwin Camacho as the fox in the henhouse, nothing will change. John Kydes will be propped up as our next Mayor, this tight knit, friends and family circle will continue to keep appointing each other to positions, and we will not be the Weak Mayor, Strong Council form of local government which we should be for two more agonizing years.