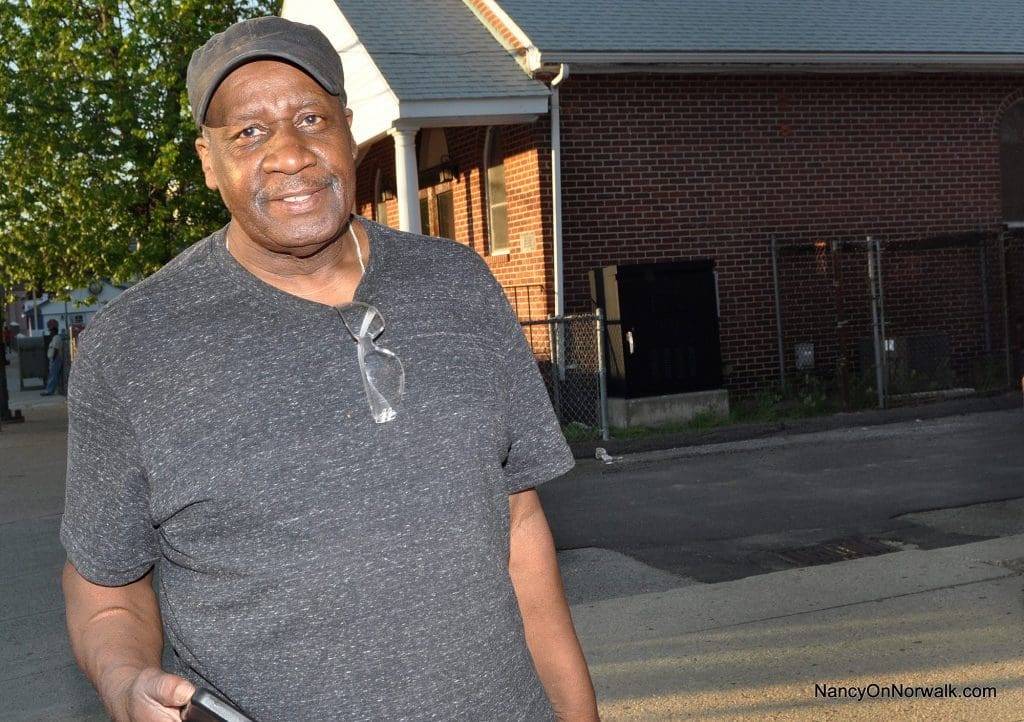 District B Democrats met Monday to vote on their choice of a replacement for Common Council member Faye Bowman (D-District B).

Their vote is non-binding, but rather a recommendation to the Democratic Town Committee. The vote, according to two people who attended the meeting was:

District B Chairman Bobby Burgess did not return an email asking about the results. DTC Chairman Ed Camacho confirmed that Dumas won and said the 11 District B DTC members will vote on June 20 to elect Bowman’s replacement.

Langella is a DTC member.

Dumas founded the South Norwalk Citizens for Justice in 2015 and is its president. His record of community service includes leading a campaign against AMEC Carting in 2016 and leading an effort to get a collapsed building removed at 15 Chestnut St. in 2017. In 2013, he worked with the Second Taxing District electric manager to assess and upgrade street lighting and in 2012, he introduced area youth to Long Island Sound in the Soundwaters South Norwalk Youth Fishing and Boating Program, according to his resume. He has, every year since 1996, held a Thanksgiving dinner and coat giveaway, and led a Secret Santa effort since 1998.

Langella has run for Common Council twice, losing each time to Bowman and Travis Simms. Last fall he was endorsed by Republicans and the Working Families Party. He came in fourth, with Republican-endorsed Hector Correa coming in third.

Langella is on the Fair Rent Commission, a Community Advisor to The Open Door Shelter and is District B Democrats treasurer.

Simms: They’ll have to shut Ironworks down

Bowman said at the May 22 Council meeting that she has a bet with Mayor Harry Rilling.

Afterwards, Bowman told NancyOnNorwalk that the bet is that the Connecticut Department of Transportation won’t have to take the Ironworks apartment building.

“If the state takes the building or if they have to shut down, then he owes me dinner,”
Bowman said. “If they can operate throughout, then I owe him dinner…. If they’re fine, they’re fine, that’s good, too.”

“I will always bet on our local businesses succeeding,” Rilling said Thursday in a statement provided by Communications Manager Josh Morgan. “I know Ironworks is working closely with the DOT to mitigate the impact during the Walk Bridge construction. I encourage residents and business owners to open up lines of communication with the DOT and my office if they have concerns.”

ConnDOT is working to replace the railroad bridge over the Norwalk River, the Walk Bridge, a massive project that will take four years, ConnDOT says. The work will require large cranes, with some speculating that the cranes will have to go over the Ironworks building.

Ironworks opened in 2014 and is owned by Spinnaker Real Estate Partners.

Simms on May 22 said that Maritime Aquarium Authority, of which he is a member, discusses Ironworks and the Walk Bridge.

“They’re going to have to shut it down, there’s no way around it,” Simms said. “So he owes us dinner.”

Conn DOT officials were asked about Ironworks Tuesday at the first of two public information sessions. They were meeting with Spinnaker regularly to discuss the staging of the construction, ConnDOT Manager of Facilities and Transit James Fallon said.

“Once we get additional information about exactly how that sequence, the duration and the stages are going to play out, then we’ll have additional conversations,” Fallon said. 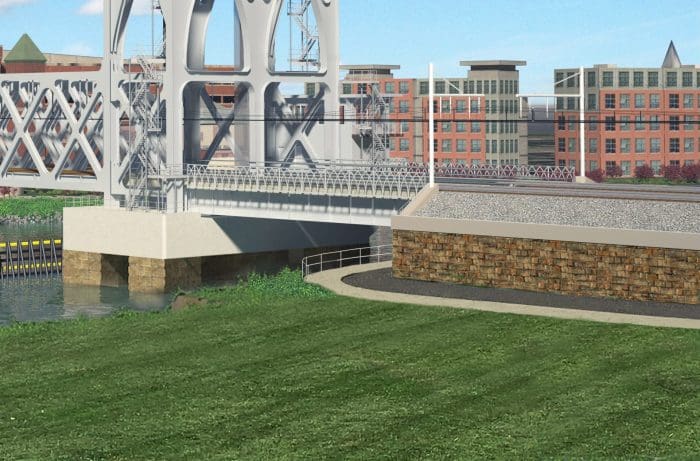 A detail from the Connecticut Department of Transportation’s latest Walk Bridge rendering, showing a footpath.

ConnDOT was also asked if there’s a footpath planned for the east side of the river, as part of the Walk Bridge project.

Yes, ConnDOT project manager John Hanifin said, explaining that it will go down in front of the existing abutment, then along the new abutment, heading east and ending on Goldstein Place.

This is shown on the newest rendering, Fallon said.

NancyOnNorwalk readers recently suggested that the new Walk Bridge design is ugly, that the Bordeaux Bridge would be a better bridge from which to model an iconic look.

The Pont Jacques Chaban-Delmas is a vertical-lift bridge over the Garonne in Bordeaux, France, opened in 2013. It carries motor vehicles, not trains. It is said to be 361 feet long; the Walk Bridge is planned to be 240 feet long.

NancyOnNorwalk contributor Harold Cobin directs you to a different comparison, a bridge in New York City. 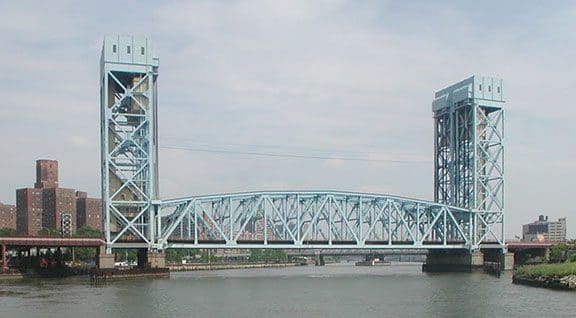 “It’s owned and maintained by Metro-North.”

The Council Land Use Committee on Wednesday moved forward the proposal for the city to acquire the South Norwalk Community Center’s half of 98 South Main St. with barely a word spoken.

Council member Doug Hempstead (R-District D) protested that there was no backup material provided on the matter, with Land Use and Building Management Committee Chairman Thomas Livingston (D-District E) and Council member Nick Sacchinelli (D-At Large) replying that it had been discussed in executive session recently and a thick packet of information handed out at that time. Hempstead could get the packet, they said.

The Committee voted to move the matter to the full Council, with Hempstead abstaining.

This long-awaited development stems from the Norwalk Economic Opportunity Now (NEON) bankruptcy, settled a year ago, with the city gaining ownership of NEON’s half of the building.

“It is virtually universally agreed that the city co-owning a dilapidated building with decades of deferred maintenance in need of serious capital improvements with a financially strapped non-profit co-owner is less than ideal,” Assistant to the Mayor Laoise King wrote in December. “We have been negotiating with SNCC over the past few months to see if it is possible to come to an agreement for the City to buy out SNCC’s ownership interest so that the City is the sole owner of the property.”

So far not a single elected official has taken up Cong. Himes offer of changing the USCG designation of the navigable status of the little used shallow river to permit a fixed bridge. As the Congressman did for Bridgeport saving major City disruption. Leading to speculation that the Developers see new profit opportunities with a new lift bridge and major dreading of the shallow harbor.

we were told contamination was coming from above Ryan park , we were lied to or does the city know this and buying a dirty lot anyways?

Thomas Livingston is clearly moving fast on this one is it liability or just common sense?

What is Laoise King thoughts on what was said in one of Mr Sheehan’s meetings?

Cant ask the ssme person who started the Ryan Park Cleanup he left when the EPA stepped in and took over.