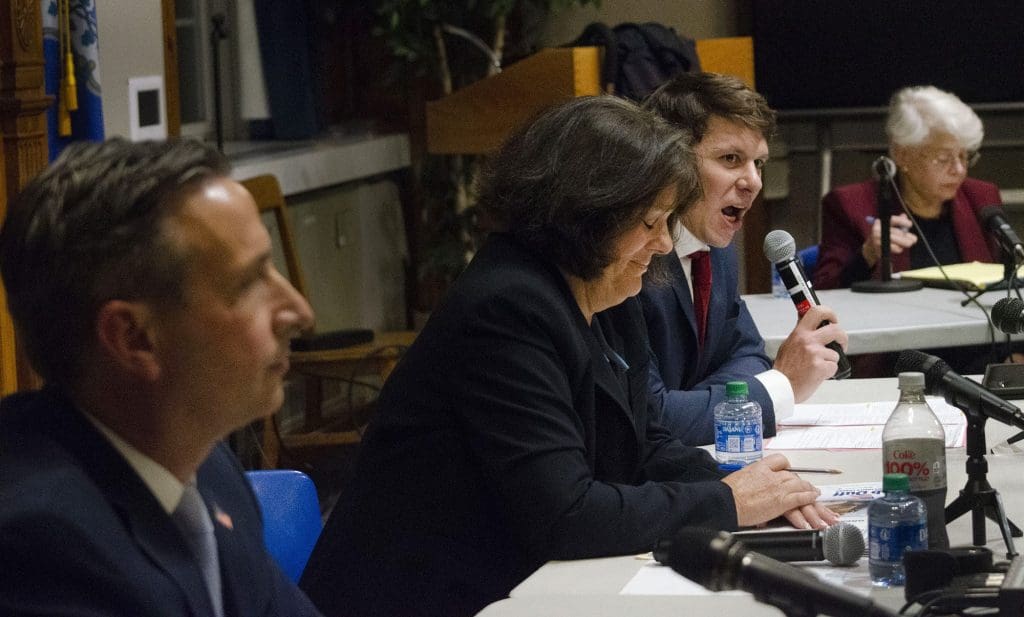 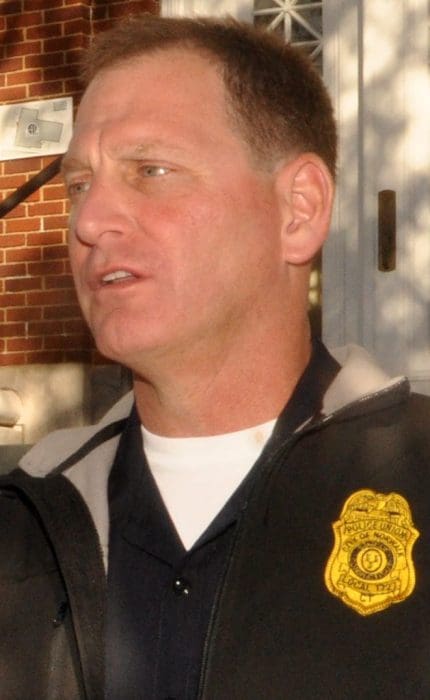 Norwalk Police Sgt. David O’Connor. Supporting political candidates is like choosing between a douchebag and a turd, he said, referring to a South Park episode. (File photo)

With the Norwalk Police Union meeting Thursday to vote on endorsing a candidate for Governor, its President doesn’t know if it would be wise to choose Republican candidate Bob Stefanowski, even if Democratic incumbent Gov. Ned Lamont signed the police accountability bill two years ago.

“Stefanowski saying that his first thing he was going to do as the new governor is repeal police accountability goes to show exactly how ignorant he is of how the levers of government work. Because he has absolutely no authority to repeal a law. If that was the case, (former Gov.) Dan Malloy would have repealed possession of narcotics and his kid wouldn’t have had any problems,” Lt. David O’Connor, president of Police Union Local 1727, said Wednesday.

O’Connor also said he didn’t know if it’s wise to back a losing horse. Union members want to make a political stand but it’s a Democratic state and that won’t change soon.

“I’m conflicted because I think that when the race is so obviously done even before it starts, when you’re behind 15-16 points in the polls, we’re backing a loser and that’s not good for us either,” he said, likening it to supporting the Jets but not betting on them to win the Super Bowl.

O’Connor cautioned that he has one vote and “my personal opinion means nothing.”

He said, “I just think that I think that when we make an endorsement, it shouldn’t just be straight down the Republican ticket. We should be thoughtful and deliberative about what we’re doing …If it’s simply because we don’t like police accountability, Bob Stefanowski is gonna do precious little to change that. If he thinks that we’re so stupid that he thinks that he can say, ‘I’m going to repeal it’ … that’s not how things work. I think he thinks he’s talking down to us and that we’re so gullible we’ll believe this crap he’s shoveling us. Not that Ned Lamont is any better.” 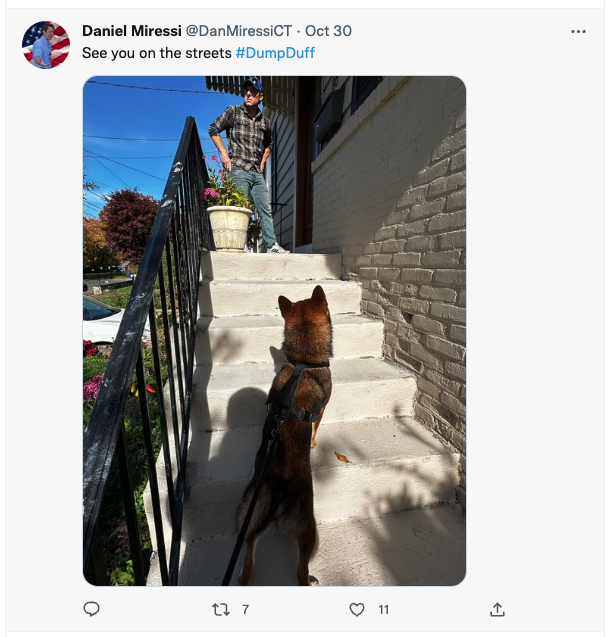 Under the Hatch Act, Post Office employees are barred from running for election to a partisan political office. “Penalties for Hatch Act violations range from reprimand or suspension to removal and debarment from federal employment and may include a civil fine,” the U.S. Office of Special Counsel said in a 2018 news release.

Miressi was born in Norwalk and raised in Monroe, he said in May. He graduated from Trumbull High School and went to Framingham State University, majoring in history and minoring in education. There, he distinguished himself in hockey and went on to play at the minor league level, last for the Danbury Titans in 2015-16. He’d worked at the U.S. Post Office for two years, he said.

“I coach hockey and mentor the youth that come through the programs,” he said Wednesday in an email. “I believe it is important to add that I am not going to apologize for resigning from my secure government job because I wanted to commit my day to day to running in order to effectuate change in our District.”

According to Republican Registrar Brian Smith, Miressi first registered to vote in Norwalk three days before the Norwalk Republican convention in July, where he was endorsed to run against Duff. 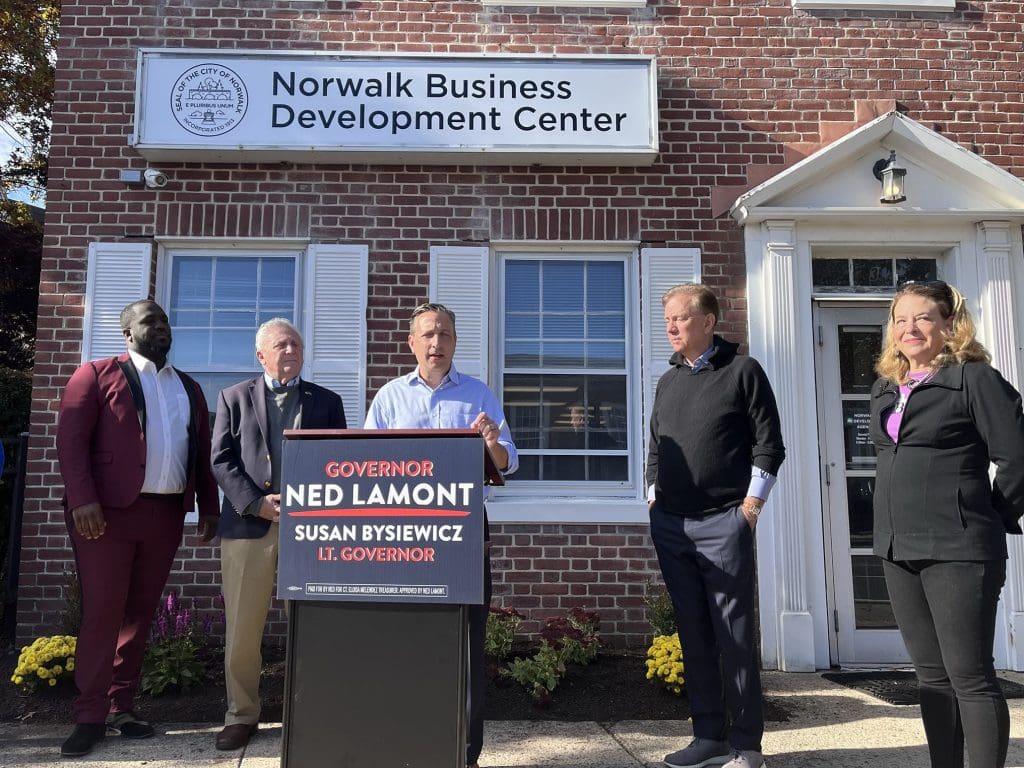 “There is so much interest in being here in Norwalk and that is because of the work and the investments Governor Lamont has made. He has supported infrastructure, parks, schools and transit-oriented development. We are grateful for his support,” State Senate Majority Leader Bob Duff (D-25) said Monday in a news conference, according to a news release.

Mayor Harry Rilling touted Lamont’s leadership during the pandemic and said Connecticut was listed as one of the safest states in the country during the worst of the pandemic.

Lamont mentioned “$296 million here for Norwalk for transportation, housing and getting our state growing again.”

Regarding David O’Connor – I hope he never forgets July 24,2020. Bob Duff put every Norwalk Cop in a very bad light during a very tense time. All for a few votes. I hope integrity still means something.

Duff certainly thinks you are stupid. Not that these endorsements mean anything.

The silly season of CT politics is almost here. This turn, it has been instructive to view the incumbents strategy – which has largely been – silence. Don’t say anything is better than a single mis-step. Bob, would you like to answer that question? “NO”. In CT – the dominant D party is in protective mode, which given the economy, is probably smart. Just don’t lose too many seats – especially the top of the ticket – and we’ll still be in control of this mess.

Which begs the question – what is the fear over incumbent Lucy Dathan? They effectively gerrymandered her district to remove as much reliable R territory as possible. Was it her debate performance? Or is it the clear vision and communication from her opponent – Don Mastronardi that frightens them?

To wit – there have been 10 letters of support published in NoN over the last 9 days since their debate. The comments are also instructive –

Now, there are still a few “daze” remaining, so I expect another letter of support or 2 – maybe touting little things – like she personally picks up all the litter on the merit between exits 36 – 40, or – that she deliver’s babies for sport, or – bigger things – that she is a shoe-in to win the Fields medal, and will be the first to colonize Mars.

Give the local D’s some credit – they are coordinated. I see a tin hat with little tissue papers of “issues” – and each loyal servant to the party picks one – and writes what they can. Most of it nonsense – which is why – no real dialogue. But again the strange issue is – NO other candidate has received this kind of – well – desperate attention. No – seriously – I swear – she is good for us. Spelled L-U-C-Y. All you need is a well placed K.

I’d like to know how the candidates feel about the above story…Another disgrace pushed by Democrat Comptroller that cost Norwalk Public Schools a lot of money…Ridiculous..
And Lucy wants to keep pushing Public Option on us? I’d like to have her comment on this story and educate us on where Lembo went wrong…By the way he’s the same Kevin Lembo who’s educational background for the job of Comptroller was a purchased on-line degree..Although, he was a step up from his Democrat predecessor who’s academic background was an Associate’s Degree in Radiological Technology…Is that possible??