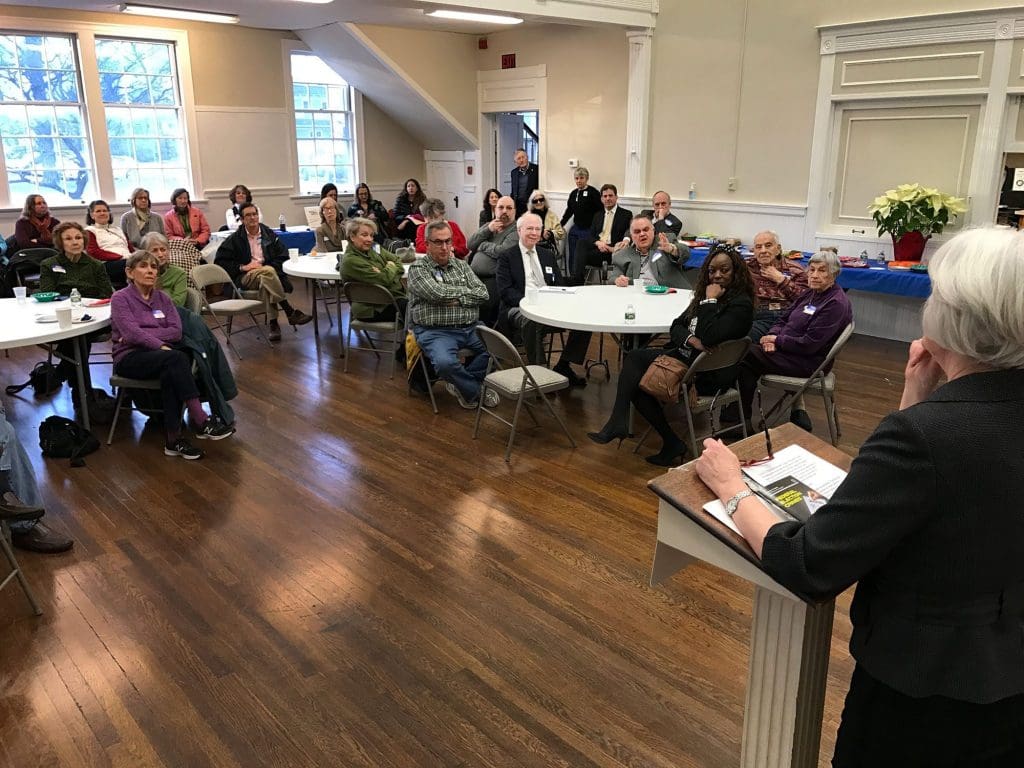 Norwalkers listen Sunday to Peggy Reeves, Asst. to the Secretary of the State for Elections, Legislative & Intergovernmental Affairs, at a League of Women Voter’s of Norwalk meet and greet in the Congregational Church on the Green.

Vinny Mangiacopra, who came in second in the 2013 Democratic mayoral follies, has switched his voter registration to unaffiliated.

Mangiacopra declined to say why but a political veteran said this would make it much easier for Mangiacopra to run for mayor.

All he’d need is signatures, not the endorsement of the Democratic Party, and he’s gotten signatures before, the source said.

Mangiacopra was the Democratic Town Committee District D chairman for years and in 2013 ran for mayor. Mangiacopra was part of a four-way Democratic primary, losing to former Norwalk Police Chief Harry Rilling, who went on, of course, to unseat Mayor Richard Moccia.

Rilling announced Sunday that he is seeking a third term.  Word is a Democratic opponent might spring up from District B.

They’re off and running: a flurry of bills have been filed in the state legislature to nudge Connecticut to develop a more equitable Educational Cost Sharing (ECS) formula.

State Rep. Gail Lavielle (R-143), a member of the Joint Committee on Education, on Jan. 10 filed proposed HB 5337, “An Act Establishing A Task Force To Analyze State Education Funding,” which was also referred to the committee.

Lavielle on Jan. 17 filed proposed bill number 5701, “An Act Concerning The Timing Of The Adoption Of The Education Cost-Sharing Grant And Municipal Aid Funding By The General Assembly,” to the Committee on Appropriations. This would require the ECS grant and municipal aid portions of the state budget be adopted by April first of each year.

There are currently four other similar bills.

Two, filed by Republicans, seek to revise ECS for the purpose of equitably funding small towns; a Democrat simply wants to “make revisions to state and local funding for education” and a Republican wants to “provide cost-of-living increases to a town’s ECS grant.”

Elsa Peterson Obuchowski has been appointed by Duff to serve on a state task force that is studying value-based pricing for prescription drugs.

“Value-based pricing of prescription drugs is an approach to prescription drug pricing that attempts to balance the benefits of a drug with its costs; under such a system, pharmaceutical companies are generally required to detail how they arrive at the retail price of a new drug while also more clearly demonstrating its value to patients, such as proven health outcomes,” a press release said.

Obuchowski serves on the Oak Hills Park Authority, is First Taxing District treasurer and is on the Democratic Town Committee.

“Elsa is going to be part of a broad group of individuals whose talents and interests all coalesce around one very important and fundamental goal: to bring some sanity, some reason to the outrageous cost of  prescription drugs,” Duff said in the release. “Millions of Americans saw their medication costs go up last year; some are paying thousands of dollars a month for one script. We want to get a handle on some cost-containment measures to help Connecticut residents cope.”

“Some believe that value-based pricing should also allow drug prices to be set by objective, independent agencies that use evidence and data to arrive at the retail sales price.

“The 13-member task force is charged with identifying best practices in the value-pricing of drugs with a focus on improving health and containing initial costs.

“‘I hope to bring an average consumer’s sensibility and point of view to this very important and complex subject. It’s long past the time for drug prices to come down to real-world levels to help address the real-world medical problems of many drug consumers,’ Obuchowski said.”

Permit revenue is coming in high, Board of Education Finance Committee Chairman Bryan Meek said last week at a meeting to review the audit completed for Fiscal Year 2016-17.

Meek asked Finance Director Bob Barron how it’s looking this year, given the building going on in the city.

“I am still concerned (about balancing the budget),” Barron said. “You are absolutely right, building permit revenue is coming in strong. There’s a chance that it might even come in a little stronger because I think GGP had asked if they could pay all their building permits at once, in one permit, which would bring in more revenue this year but then I would have to adjust my projection for next year down.”

GGP, formerly General Growth Partners, plans to build The SoNo Collection, a mall on West Avenue where it intersects with Interstate 95. The total of its permits is estimated to be about $5 million, including the individual permits its store owners would pull once the structure is erected.

GGP reps did not respond to an email asking about that alleged possible permit windfall.

Barron said that Norwalk started this fiscal year in the hole, as a $1.6 million state grant was not funded, although every municipality had been assured it would be. The increased building permit revenue will help offset that loss but won’t eliminate it, Barron said, speculating that vacant positions will help.

The League of Women Voters of Norwalk’s meet and greet, where the public could interact with local politicians, was also at 3 p.m. Sunday.

“It was an oversight,” Rilling said, as he rushed from his event at the Norwalk Inn to the League event, up the street at the First Congregational Church on the Green.

Rilling said that when he got the League invitation he didn’t put it into his personal calendar and, “we got the two times mixed up.”

He didn’t want to make his mayoral announcement before The Mayor’s Annual Ball, and the following weekend is Superbowl Sunday, he said.

The League event featured a talk by Peggy Reeves,  Asst. to the Secretary of the State for Elections, Legislative & Intergovernmental Affairs.

Obuchowski asked about rumors that people who owe child support or have other legal issues could get arrested when they show their ID at the polls. Reeves said no, that didn’t happen, that police were there to maintain order.

Voter fraud being in the news these days, NancyOnNorwalk asked Reeves after the event if that’s a problem in Connecticut.

“There is no possibility of widespread voter fraud such as to change the outcome of an election. There is certainly little if any voter impersonation,” she said, but added that there are occasional allegations of absentee ballot fraud.

“It’s more a question of candidates who show up just as the absentee ballots are arriving,” to prey on people who are vulnerable, she said.

Absentee voters don’t have the protections of people who go to the polls, she pointed out.

Council members thinking it over

If you’re looking to find out who is running for the Common Council this fall, as one NoN reader has been, you’re out of luck.

Nick Sacchinelli (D-At Large) said he’s  thinking about it, while Mike DePalma (D-District D) headed for the door without a word spoken to answer the question.

“I don’t know yet. No comment,” John Kydes (D-District C) said, a sentiment echoed by Eloisa Melendez (D-District A).

“I go back and forth, 18 years of being an elected official is a long time,” Bruce Kimmel (D-At Large) said. “There’s pros and cons. … I really don’t know, and it’s still January.”

Then again, there was a little information.

“I am really, really on the fence but with these kids and all the activity they’ve got going on, it’s really draining. But we’re still talking about it,” Maggio said.

Later in the week, Travis Simms (D-District B) declined comment.

Wondering if Mangiacopra’s decision to become unaffiliated is because he and his friends got frustrated trying to impose their definition of “real Democrats” on others. Don’t think he served more than 3-4 years as District D chair and only became active in the party around 2008 when he and other members of the self-proclaimed “youth movement” thought they could run things better. Many have moved on or out of town and another is no longer a Dem.

Wondering … maybe because he is disappointed with the current leaders of the Democratic team … they control the City’s leadership but we still have:
1. Stagnant Grand List
2. No master plan
3. No accountability with Planning or Zoning
4. No effort to work or attract businesses (Elizabeth Stocker, please!)
5. Constant efforts to nickel and dime with no big picture plan
6. Floundering property values

Where is this City headed?

If I recall correctly, some of Mangiacopra’s biggest backers were the municipal union heads from around the state, so if you think the grand list will improve while shelling out more money and benefits to the unions, good luck with that.