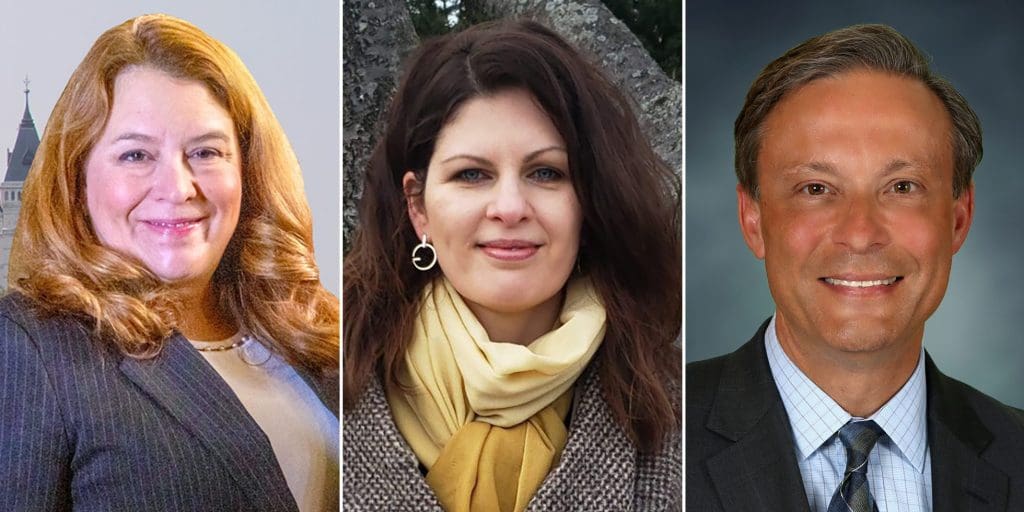 Irina Comer, a Republican businesswoman, announced Monday that she is seeking to challenge State Rep. Lucy Dathan (D-142) this fall. Fred Wilms, who held the seat for two 2-year terms before being unseated by Dathan in 2018, will announce his candidacy Wednesday, Norwalk Republicans say.

The district was represented by Larry Cafero, a Republican, from 1993 to 2015 so Dathan’s win came as a jolt to many. She was part of a blue wave in response to President Donald Trump and was also one of many women to win election that year.

Comer calls herself a “political outsider” and “first generation immigrant” in addition to being “a professional businesswoman for nearly 20 years.” She seeks to “defend the American dream in a state defined in recent years by increasing taxes, decreasing jobs, strengthening public unions, weakening private opportunities, negative migration” and “single-party groupthink.”

“She believes that residents of Norwalk and New Canaan deserve someone aggressively promoting and protecting their interests, not just echoing the Hartford political machine,” her press release said, explaining that she was born in the U.S.S.R. and, “Having grown up in a culture of absolute central state planning and false promises of equality, Comer believes strongly in the provision of equal opportunity, the assurance of freedom to pursue it, the reward of merit, and the accountability of government.”

“Comer is a pragmatist, not an ideologue, the release said. “…A graduate of NYU’s Stern School of Business, she moved to Norwalk and lives with her husband, their son, and their chocolate lab.  She owns and operates her own business brokerage company focused on Connecticut small businesses.”

The Comer Business Brokers website states that Comer received an MBA from the Stern School of Business and worked in the Mergers and Acquisitions division of Bank of America Merrill Lynch.

Dathan, a Certified Public Accountant (CPA), served as Chief Financial Officer for Domino Data Lab in the San Francisco Bay area before moving to New Canaan and was manager of finance and intellectual property for the London Stock Exchange from July 2003 to October 2005.

Wilms is former Norwalk Board of Estimate and Taxation Chairman and a Webster Bank Senior Vice President working with small businesses. He sent out a press release last week announcing that at 11 a.m. Wednesday in the Norwalk Inn he will “host a press conference to announce his 2020 plans for the 142nd State Legislature.”

“I will be announcing my State Representative intentions this Wednesday at my previously scheduled press conference,” Wilms wrote Monday to NancyOnNorwalk, in response to Comer. “I am delighted that House GOP Leader Themis Klarides and State Representative Gail Lavielle will be joining me. We will have a robust discussion about the problems facing Connecticut, how they impact Norwalk & New Canaan and how I can do my part to help.”

“I have felt so honored to serve the people of Norwalk and New Canaan in the General Assembly for the last 12 months.  I have been championing issues that I have heard continuously from residents including: affordable healthcare and prescription drugs, a balanced state budget that provides security in a robust rainy day fund, increasing environmental protections over our natural resources and common sense gun legislation.

“I believe the democratic process thrives when people get involved to get all ideas on the table. I look forward to this journey.”

“I am extremely proud of the work my office accomplished for the residents of Southwest Connecticut this year,” U.S. Rep. Jim Himes (D-Greenwich) said Monday in a statement. “Our work is driven by what I hear from constituents at town halls, roundtable events, local meetings and business visits. Listening to, and meeting with, my constituents makes me a better representative and I look forward to continuing to serve the Fourth District in 2020.”

Potential Republican challengers to Himes include Jonathon Riddle, a South Norwalk man who has served as a Vice President and lead advisor for the Private Bank of Bank of America in Westport for two years.

Himes said he’d heard from hundreds of constituents in his 2019 town halls and, “My office hosted a series of over 30 workshops and roundtables this year focused on helping small businesses grow, combating Medicare scams targeting our seniors, and ensuring the upcoming elections are secure.”

In his “Jim on Your Job” series he learned how to support businesses in Congress and he’s proud of business growth in the Fourth District, he said.

“My staff and I were pleased to help over 650 constituents with cases and issues involving the Social Security Administration, immigration, and veterans’ affairs this year, and you can read a number of this year’s success stories here,” Himes is quoted as saying.

Now on to the meat and potatoes.

“My office assisted with a number of federal grants to help Fourth District constituents and Connecticut residents this year,” he said, listing:

‘I am a raw dude that is far from perfect’

Former Republican State Senate candidate Marc D’Amelio has lately found himself on a national stage due to his daughter’s success on the social media app TikTok. So, D’Amelio, who in late 2018 said little after failing to unseat State Senate Majority Leader Bob Duff (D-25), has been speaking his mind on Twitter and Facebook.

“You know you are doing something right when both Republicans and Democrats hate you. I wish people would recognize that. We need to elect more centered candidates that will put people over party,” D’Amelio tweeted on Dec. 29.

He’s taken criticism from some who allege he isn’t protecting Charli. His response was a Tweet announcing that Attorney Darnell Crosland “protects at all cost.”

Crosland Tweeted, “Meet Charli D’Amelio, TikTok’s newest viral teen celebrity. This is amazing. Young CEOs and the Zuckerbergs start out as Charli is doing. I love it when kids reach for the stars. No doubt she is inspired by the coolest dad ever Marc D’Amelio.”

Other Tweeters suggest that they’d like to see a D’Amelio reality show.

On Dec. 29, D’Amelio Tweeted, “I will never run for political office again. Politics is the most toxic thing I have ever been involved in. It sucks, because many people that want to serve see the consequences of running and decide not to. Not sure what the answer is but my life is too good to f*** it up.”

League of Women Voters of Norwalk member Elsa Peterson Obuchowski announced this Sunday but it bears repeating: The Norwalk Republican and Democratic Town Committees are holding votes within the next six days to elect new members.

Town Committee members wield power in that they endorse candidates for public office.

“So, if you as a citizen want more say over which candidates receive party endorsement, now is your chance to run for a seat on your town’s Democratic or Republican Town Committee. If you’re not inclined to run, you can at least come out to the caucus and vote,” Obuchowski wrote.

The DTC will elect 11 members from each Council district at 7:30 p.m. Thursday in these locations:

If your name is on the last completed Democratic Party enrollment list in your district you will be allowed in and allowed to vote, DTC Chairman Ed Camacho said in a press release.

“The caucus is subject to early closing if, after nominations are closed, there are fewer than, or exactly, the same number of candidates as membership positions to fill,” he wrote.

If it’s contested, the poll will remain open until 9 p.m. If it’s necessary, a run-off will be held Friday at the same time in the same locations.

According to Obuchowski, Republicans will hold their caucus at 7:30 p.m. Monday in the Norwalk Inn, located at 99 East Ave.

We need to start thinking about Norwalk only. The Macro view of some of our current legislators is not helping our “city”. I would like to know how these candidates are going to bring some needed resources home to our town. Our schools are using a bandaid approach to solve this lack of support. That approach will not last for long.

He’s really bragging about a whopping $8 million in pork? That’s less than $10 per constituent.

Norwalk alone pays roughly $3 billion a year in federal taxes for some perspective.

And not one mention of anything to do with infrastructure and traffic in his district, which is amongst the worst in the developed world. Sad.

The Norwalk Latino community needs to get more involved. Heck, 52% of Norwalk students are Latino. They deserve more representation. That being said, they should realize our State Representatives (Bob Duff et al) are bringing zero to help ELL kids. Why on earth would Latinos vote for these representatives? Democrat policies are killing small businesses. Our new immigrants will be small business owners. Again, why the heck would they continue to back these policies which are and will hurt them? So in summary, Dems are not supporting ELLers to bleend into Norwalk academics. Dems bleeding small businesses dry will hurt small Latino businesses taking that next step into middle class. If the Republican party in Norwalk was smart they would embrace all these new Norwalkers. Lack of ELL support from the state is only the tip of the iceberg

One other thing – In full disclosure. Based on Elizabeth Warren’s school of genealogy, my family is part Spanish. I’ve been told the Spanish Navy stopped over in Ireland back in the 1500s. My Grandmother has a dark complexion and told me there’s a possibility we have Spanish blood running through our veins. So, I may be bias in my support for ELL programs in Norwalk. Just wanted to let people know. I’ll be taking DNA test once Obamacare covers it.