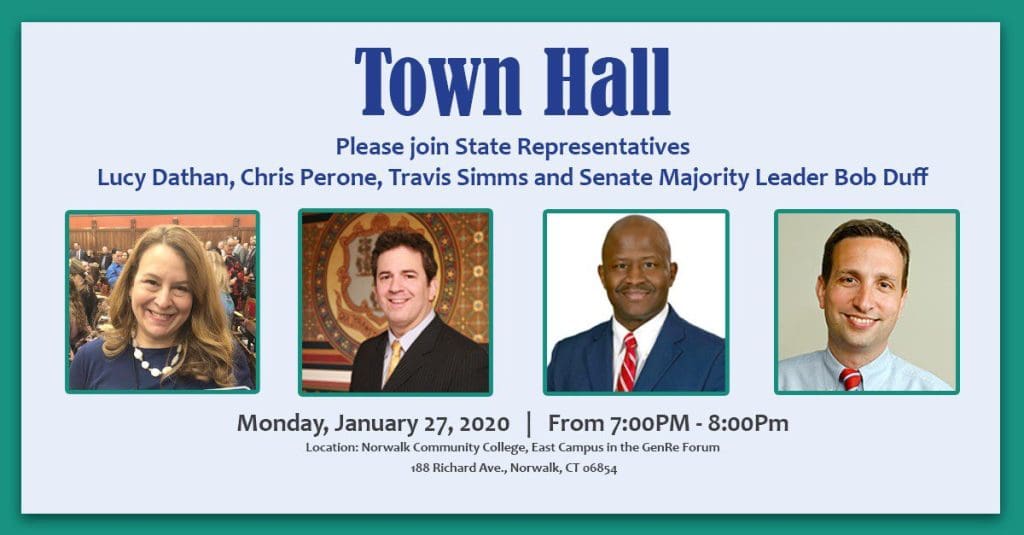 Looking for your input

The 2020 legislative session starts Feb. 5 and “the lawmakers are looking forward to hearing from constituents about concerns on state issues, as well as ideas for potential legislation,” the release said.

The town hall is scheduled to run from 7 to 8 p.m., Monday Jan. 27, in the Norwalk Community College Gen Re Forum, in the East Campus, located at 188 Richards Ave.

‘Make a difference for the environment’

“Now is the time for a Green New Deal in Connecticut to: Tackle the climate crisis, Create good- high-paying jobs, Fight for equity and environmental justice,” a flier from the Connecticut Citizen’s Action Group (CCAG), the Sierra Club of Connecticut and Democracy for America states.

This Connecticut Green New Deal will be the focus of an “evening of learning, sharing & action about making this bold policy a reality at the CT General Assembly in 2020, at 6 p.m. Jan. 30 in the First Congregational Church, located at 3 Lewis St.

Larry Williams Jr., coordinator for the National Labor & Economic Justice Program of the Sierra Club, will facilitate the discussion.

“Find out how you can become involved in Fairfield County and make a difference – for our environment and our future,” the flier states.

A light dinner will be provided at the free event.

Norwalk Police Sgt. Gregg Scully has been appointed to the Connecticut Port Authority Board of Directors by State Senate Majority Leader Bob Duff (D-25), according to a press release. Scully’s term began immediately and expires on June 30, 2021.

“Sergeant Scully will be a great addition to the Connecticut Port Authority Board of Directors,” Duff is quoted as saying. “His distinguished career with the Norwalk Police Department, including his work as a Marine Unit Officer and Norwalk Harbormaster, gives him unique insight into the Connecticut ports and maritime industry. I’m pleased that Gregg will be able to contribute his expertise toward ensuring our ports and maritime economy are thoroughly invested in and maximized.”

The Connecticut Port Authority is a quasi-public agency created in 2014 that is responsible for marketing and coordinating the development of the state’s ports and maritime economy.

Scully has been with NPD since 1999, the release explained. He was a patrolman and in 2013 was promoted to sergeant.

“From 2006 – 2013, he served as a full-time marine unit officer, where he worked closely with the U.S. Coast Guard, the Department of Energy and Environmental Protection and Aquaculture, obtaining water samples for environmental testing in the harbor and surrounding Norwalk Islands,” the release said. “Since 2017, Mr. Scully has served as Norwalk Harbormaster where he enforces all regulations in order to ensure the safety of navigation, security of the harbor, and correct operation of all harbor facilities.”

Scully said he’s looking forward to bringing his experience to the state agency, in service to “one of the most vibrant seaboards in the Northeast,” according to the release.

The Port Authority’s governing board is composed of 15 voting members, including state officials, community leaders, port authority professionals, and individuals with knowledge related to trade, marine transportation, and finance, the release said.

I’ll leave my input here for now. I say Bob and company should tax us more, take more services away and for God’s sake please allow more free loading illegals into their state of Ct. While they are at it make Ct even less business friendly.

But really, the Democrats are looking for input? Are they really that out of touch as to how bad they have hurt the taxpayers and to cost of doing business here all while adding to the number of state employees?

The only segments doing well in CT are state employees and moving companies.

I will not be able to make it due to a work dinner. Can someone please ask ALL 3 about lack of support for ELL kids in Norwalk and our current crisis? (Teachers are now quitting at this point)..Please don’t let them talk about ECS changes in 2017. THAT is a load of bull.