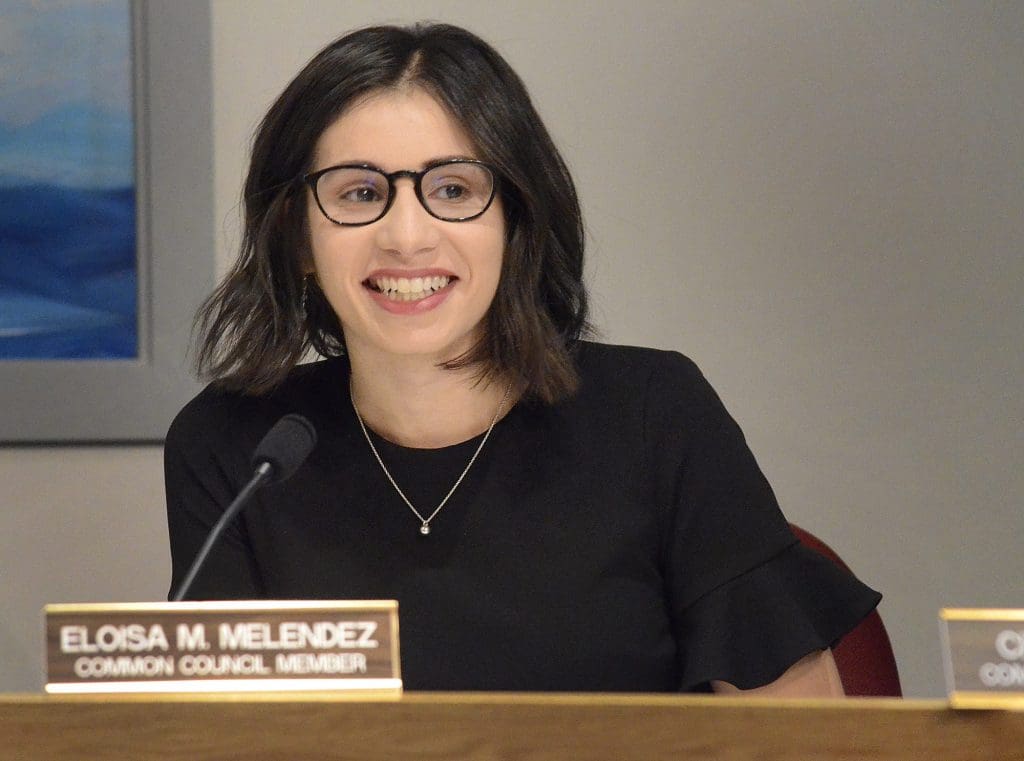 There’s an opening on the First Taxing District Board of Commissioners due to the death of Marija Bryant, who had been serving as chairwoman.

Under the City’s charter, the remaining Commissioners have 60 days to choose a replacement, First Taxing District Board of Commissioners Chairwoman Elsa Peterson Obuchowski said at Monday’s Democratic Town Committee meeting. But the Commissioners don’t want to run out the clock, so anyone who is interested is asked to submit a letter of intent by 4:30 p.m. Wednesday.

“The Commissioners form an elected Board of Officers which oversee all functions of the First District Water Department (FDWD),” The FDWD states on its website. “The Commissioners meet monthly to set policy, establish and approve budgets and through the General Manager, direct all of the employees of the FDWD. The Commissioners function in part time positions.”

No, the NAACP did not descend upon Norwalk City Hall on Tuesday; although Tuesday’s Board of Education meeting was cancelled due to weather, Norwalk Branch NAACP (National Association for the Advancement of Colored People) President Brenda Penn-Williams wasn’t planning on busloads of protestors anyway.

“It’s Christmas-time,” she said Monday. “I don’t want to remove folks from their cities.”

Penn-Williams had sent out an email inviting locals to the meeting.

On Nov. 19, Penn-Williams and Scot Esdaile, President of the NAACP Connecticut State Conference, packed the City Hall community room with protestors, demanding that Board of Education member Mike Barbis resign due to an email he wrote in June that included the phrase “Blacks f—Latinos.” Barbis refuses to resign.

Penn-Williams said she’s thinking she’ll put out a call for protestors in January or February, but that depends on the weather.

“We are going to have some more buses, but I’m gonna invite New York,” she said. “I’m not playing. We’re gonna keep it up.”

No, the Board of Education cannot legally remove one of its members. But the Common Council could vote to remove the Mayor, Democratic Town Committee Vice Chairwoman Eloisa Melendez said in November.

Melendez made note of that the day before Mayor Harry Rilling was inaugurated for a fourth term, and Melendez’ own six years in City government came to an end.

“I asked him if he would let me do that tonight so that he could be sworn in again tomorrow, just for fun,” she said, then mimicking her reaction to his reply, “I’ve been a Council member for six years and it’s done tomorrow. ‘I can’t have some fun, Mayor? C’mon.’”

On Wednesday, she remarked in a comment, “It is crazy that there is a process to remove some elected officials from office but not others.”

This story was edited at 8:39 p.m. to add information to the Melendez segment; a correction was made at 12:16 a.m. Friday to show that First Taxing District Commissioners receive a stipend.

Ah my joke in an attempt to explain a process (Or lack there of) taken out of context! (Face palm)
The “just for fun” was because the mayor would be sworn in the next morning!
Side note: It is crazy that there is a process to remove some elected officials from office but not others.

So, unable to get more than a handful of Norwalkers to join her protests, and probably running up against protest fatigue with the upstaters she brought in last month, Brenda Penn-Williams now has to go to NEW YORK to find people willing to protest Mike Barbis? What a joke.

Mike, hang in there. You’re the most accomplished member of the Board, and given its current composition your talents are desperately needed. Personally, I look forward to seeing you serve right until the end of your term on November 21, 2023.

Why did Ms. Melendez resign? Maybe she can answer that?

Per the current composition of the board, just popping in to say the new members of the board are all professionally accomplished, bring myriad great skills to the table, and have all hit the ground running. Norwalk will benefit from their service.

Ms. Melendez did not resign. She chose not to run for reelection.

Thanks Sarah LeMieux. Mike Lyons, bad form to make jibes at the highly qualified new members of the BOE. You really need to quit the snide attack mode that has cost Norwalk $.

@Sarah — If I was you I’d load up the medicine cabinet with aspirin and keep the cork screw in the kitchen handy. You’ll surely need both in the upcoming months.
As an aside, can you share with us readers the true “all in” costs of ELL students is Norwalk? Can you also give us supporting information so we’re all clear on this issue. (One that is more of a crisis than just an issue) If you don’t have that info handy, can you direct us to who we could get that info from? The numbers being discussed seem opaque.

Mike Lyons astoundingly continues to serve up divisive comments and attacks on the NAACP, even though he no is longer serving on the BoE.

No surprise there based on his long history of controversy, which sadly is now his legacy instead of his years of service. But it certainly confirms exactly why Brenda Penn-Williams is angry and protesting.

Brenda is clearly standing on the moral high ground here, which is why we support her and her cause. Just read Mike Lyons comment above, including “What a joke.” That’s the problem.

This issue isn’t a “joke”, and nobody is laughing. What a shame Mike Lyons and his like-minded friends can’t see that.

Curious, does the new board consult with the other victims of this nefarious plot to educate children every time it rains? Or just the one person who has erroneously accused the board and school system of felonies, while herself violating every common rule when engaging school officials?

As for the thin skinned executive, I’m reminded of the quote from Vince Lombardi “People who don’t get carried away from time to time, should be.”

Why did Ms. Melendez not run for re-election?

“Mike Lyons astoundingly continues to serve up divisive comments and attacks on the NAACP, even though he no is longer serving on the BoE.” Coming from the person who holds the record for the most divisive public postings on NON, that comment is rich.

The day Ms. Penn-Williams can legitimately be said to ‘hold the moral high ground’ is the day hell freezes over. She has built a career on making false allegations against innocent people (even recently accusing Mr. Mushak’s hero, Mayor Rilling, of lying, and describing Mr. Mushak’s choice for Board of Ed, Colin Hosten, as a “puppet”). Her M.O. of accusing just about anyone who disagrees with her of “racism” has become a broken record, but her actions have also risen to the point of falsely accusing innocent educators of committing assault and battery against children.

My legacy – to Norwalkers not wearing ideological blinders like Mr. Mushak – is a revitalized public school system now outperforming every other urban school system in the state. I don’t mind that ‘controversy’ was required to accomplish this. Given the dedicated opposition to practically every step it took to get us there by Ms. Penn-Williams and her allies, it was either controversy or no progress for our children. I chose progress. https://www.norwalkps.org/UserFiles/Servers/Server_71596/File/departments/Communications/State%20of%20the%20Schools.pdf

Pay is bad. The hours, terrible. A good job for a wealthy retiree.

@Mike Lyons — As noted in an earlier comment on another story, please keep us informed from your new perch. We appreciate your comments. I may not agree with all of your comments but your knowledge of system is appreciated. Thank You.

@Sarah, kudos for being one of the few people on earth who can use the word “myriad” in grammatically correct context!!

Mushak continuing to use the race card, while most only care about the report card.

Correction: The position of Commissioner of the First Taxing District is not an unpaid role. Commissioners receive a modest stipend and are eligible for certain other benefits.

@Mike Lyons, sorry, but your legacy from our perspective is tainted with a lawsuit that cost taxpayers $372,000 because of your own personal actions, and a series of huge cost overruns on most of the BoE projects that you helped plan that cost taxpayers tens of millions more.

And just in case anyone is still under the impression you were fiscally responsible with taxpayer money, you supported wasting another $5 million to knock down and replace the perfectly solid historic Columbus School instead of renovating it as new, ignoring best practices in architecture, urban planning, historic preservation, and engineering to build a poorly-conceived and inappropriate suburban-style school in the heart of our precious urban South Norwalk historic district.

That is your legacy, reinforced by your ongoing comments defending the absurd notion that saying “Blacks f*** Latinos” isn’t quite racist enough to require the resignation of the BoE member who uttered that disgusting statement, along with a bunch of lies that misrepresented everyone’s position including my own.

That is your legacy.

Mike Lyons accomplishments were clearly appreciated by a 100 plus bi-partisan members of the Norwalk community at the Maritime Aquarium he was an integral part of founding, not to mention myriad accomplishments of 24 years of public service.

I’ll take that over bike lanes to no-where on Belden avenue, which unlike words might actually get someone killed someday.