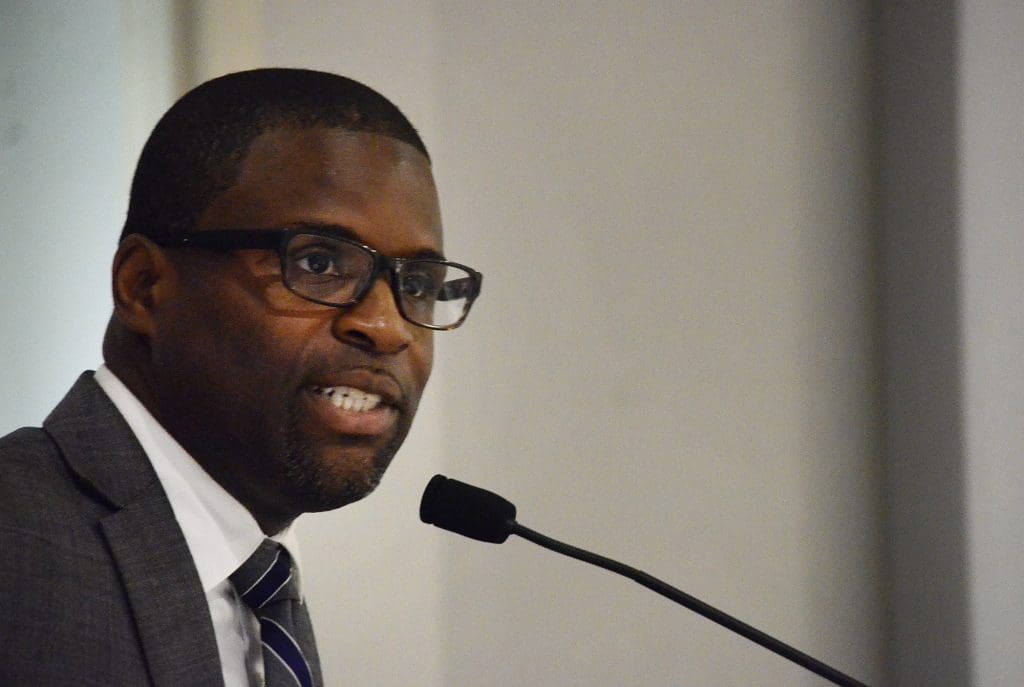 One of Norwalk’s “Chiefs” is considering trying to get a new job in Bridgeport – as Mayor.

Daniels, a 30-year Bridgeport resident, and former Director of Neighborhood Initiatives for the city, is quoted as saying, “I have heard the voices of people around Bridgeport calling for a new path. Bridgeport has missed too many opportunities for growth and progress. We owe it to the people. We owe it to our children. We owe it to the future to consider different options.”

Daniels’ news release said that in the coming weeks, he “will start the conversation by meeting with community advocates, faith leaders, small business owners, and everyday Bridgeporters to listen and discuss new ideas for addressing the issues that have kept Bridgeport from becoming all it can be.”

Does Rilling have any concerns about Daniels meeting his Norwalk responsibilities?

“Absolutely not,” Rilling said in a Saturday text. “We’ve spoken about his plan to file an exploratory committee. He understands his responsibilities to the Norwalk community are first and foremost.”

Norwalk almost never revises its Charter, John Levin said recently, pointing to the 100 years it’s been since the Charter was written. Therefore, Commissioners trying to clean up the mess should think ahead to what people might think in 2131, when it gets done again.

“I think that we should provide them some pleasant surprises, and maybe even some Easter eggs and golden nuggets. I think we should have fun,” Levin said at the Oct. 26 Charter Revision Commission public hearing. “In all seriousness, there is no rule that says that the charter of Norwalk has to be a profoundly boring document that no one gives a s— about because it’s just all legalese.”

Norwalk needs a royal family, he said. This would be an appointed position and “obviously nonpaying,” not because Norwalk doesn’t pay most of the citizens that step up to serve endless hours but because “they’re not going to do anything.”

He said, “I think we should have a town crier. This would be somebody who, again, not paid, but gets to, like, stand on the town green and, you know, read things or something like that.”

Norwalk also needs “an arbiter of stupid s—,” also known as “the ass,” to deal with “all the nonsense,” and a contrail inspector, Levin continued.

As none of these would be paid positions, “It’s not going to cost the taxpayers any money, but I think it might help get Norwalk on the map.”

Levin kept going. Norwalk needs a soothsayer, a dungeon master, an air raid warden, a cat whisperer and a village idiot. He volunteered for the last position on that list.

McQuaid said that in 1972-73, Norwalk High School opted for a royal family-type Student Government and “it was very entertaining.”

Attorney Steven Mednick, who has been hired to guide the Charter Revision Commission, said he’s done more than 30 Charters and, “this in the most unique and interesting testimony I’ve ever heard.”

The Norwalk Board of Education has been working to make many of its policies consistent with State guidelines, an effort described as “long overdue.” Members were poised to vote Monday on six updates, but this was tabled.

One was titled, “Removal of Board Officers.”

Policy Committee Chairwoman Diana Carpio said she and other Board members wanted to make it clear that “we do not have the right to remove any Board member because they are elected officials. This is, we will discuss this, this is practically a code of conduct, disciplinary action policy that we will follow and it is transparent and open to the public. It’s for us to be you know, to be held accountable for our actions. This is not to remove a Board member from the Board of Education.”

Community members have occasionally called for a Board Chairman to resign. The most recent target was Colin Hosten, after a planned move to middle school choice surprised parents. Previously, the late Mike Barbis was the center of controversy.

Carpio replaced Hosten as Chair at the beginning of Monday’s meeting.

NancyOnNorwalk emailed Carpio and others seeking clarification on the policy. Is it to separate a Board officer from their role as Chairperson, Vice Chairperson or other office?

No replies were received.

The drafted policy states, “any Board member serving as an officer shall have no legally protected right to continue in that position.”

“There’s actually a procedure that you would normally go through if there was if there was a rationale for the removal of a Board member,” said Ralph Valenzisi, Assistant Superintendent of Digital Learning and Innovation, at the Nov. 1 Policy Committee meeting. “Basically, the procedure is that, if there’s, depending on conduct and all the other bylaws, it can either be an open or executive session, a decision be made, and then there’s a number of different steps that are followed between written notice, opportunities to be heard, and so forth.”

Board member Godfrey Azima asked if the relevant political town committee should be consulted because, “In terms of removing an elected official, being mindful that the school district isn’t responsible for electing, you know, persons in these Board roles are elected … and, just where those two things intersect. You know, it is a gray area and worth being clear on who’s procedures we go forward with.”

Azima said, “I don’t think there was a conclusion that was brought about when there was the discussion of removing Mr. Barbis. He was never removed.”

Valensizi said the policy hadn’t been changed, just “cleaned up.”

I’m not sure who is helping for people find apartments and housing but I have people calling me looking for places for individuals and they can’t even afford $1000 a month single mom is working with kids and the landlords raising the rent or selling the house etc. etc. housing is a mess unless we deal with it next year it’s going to be very bad for a lot of people 😩👎🏽🙏🏼