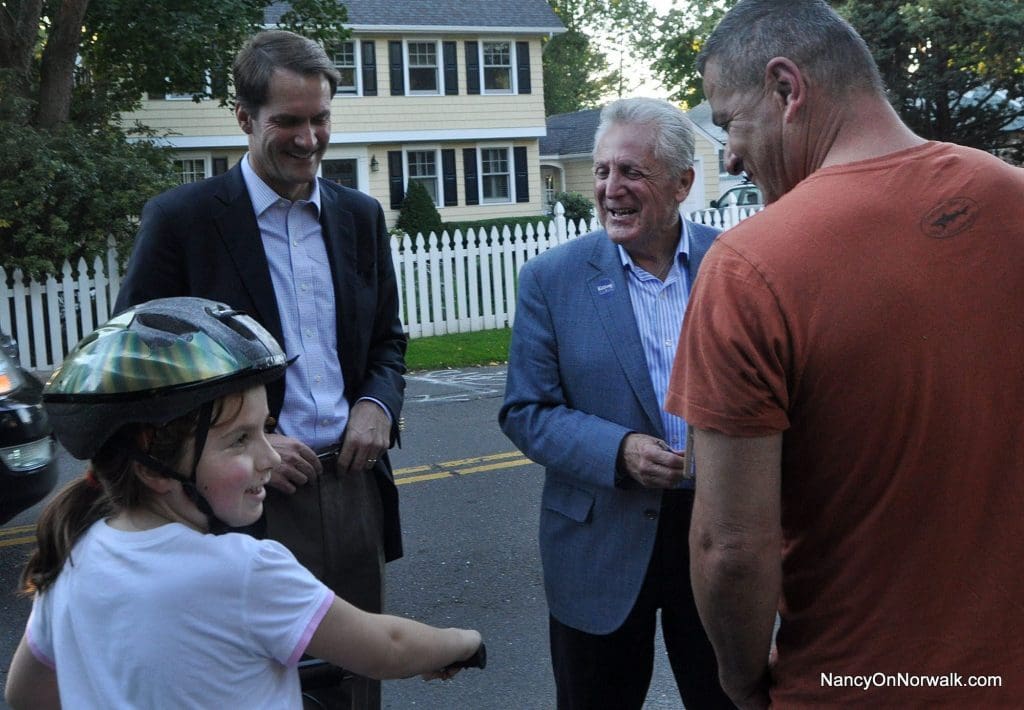 Mayor Harry Rilling had company on the campaign trail Monday as U.S. Rep. Jim Himes (D-Greenwich) accompanied him on an expedition similar to trick or treating – although it was Rilling handing out goodies.

Just after 5, the pair rang doorbells on Pine Hill Avenue, parallel to Gregory Boulevard, trailed by two campaign workers, a News12 videographer and a couple of photogs. Rilling flashed smiles around the neighborhood and handed out fliers for Democratic candidates – OK, that’s not a treat, but it’s not chopped liver either. 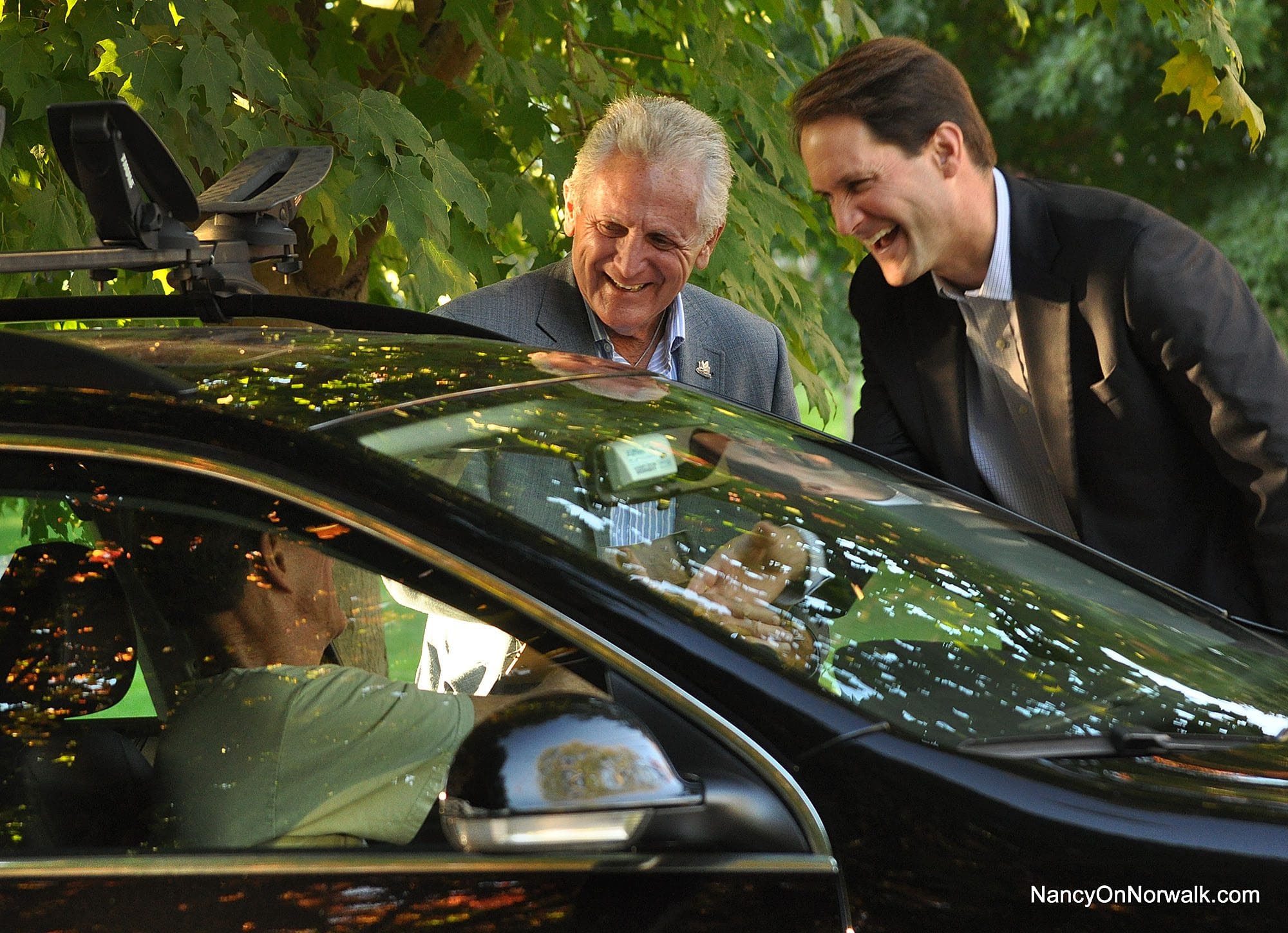 “I appreciate that he’s taking the time to knock door to door and meet some people in his district,” said Carolyn Flynn, who met the mayor and congressman while out walking her Sharpei, calling the encounter a “very nice experience.”

Flynn said she had recently moved to Norwalk from Philadelphia and wasn’t registered to vote yet. “I will take some more time to learn about the candidates,” she said.

Wilfredo Perez was standing in his driveway when the pair came along. He will definitely vote for Rilling, he said.

“The congressman will highlight Mayor Rilling’s work growing jobs and creating economic development in Norwalk,” Gearin said in an email.

If you had to think about that you haven’t driven down an East Norwalk road recently – there are John Kydes signs everywhere.

After hearing a few comments (from Republicans) about the signs touting Democratic Councilman Kydes’ re-election bid, NancyOnNorwalk took a ride down William Street and counted eight signs in short order, before being diverted off the road by a detour.

There’s even one perched high on a chain-link fence on Van Zant Street.

Kydes said he has 300 signs and they are all out in District C.

“The campaign bought 150 signs for this election and I still had 150 from the last,” Kydes said in an email.

How did he get every single one of them a home?

“I’ve had tremendous support from my community when it comes to finding yard sign locations,” Kydes said. “I believe that the residents of District C have seen over the last two years that I have their best interests in mind and that I’m giving 100 percent into being their Council representative. My hope is that come Election Day, I will be given the opportunity to continue to serve them.”

Conrad gets sales pitch from Duff

Mary Therese “Missy” Conrad was beside herself last week after trying again to convince Common Council members that the company looking to build a mall in SoNo, General Growth Properties (GGP), should be required to contribute money to begin a fund that would create apartments all over Norwalk for people who make between $35,000 and $65,000 a year.

Council members did not include that in the proposal slated for discussion and a possible vote at Tuesday night’s Council meeting, so the next day Conrad took a shot at convincing State Sen. Bob Duff (D-25) with this email:

“The Redevelopment Agency and its Commission,  the chair of our Planning Commission, & the Planning Committee of our Norwalk Common Council have not stood up for the money required for at least 38 units of affordable housing that were in the contract purchased by General Growth Properties (GGP).  The lawyer for GGP is Larry Cafero, former State Representative for Norwalk.

“This a tremendous opportunity that would be lost!  I had assumed that our Redevelopment Agency and the minority & the more compassionate members of the Planning Cmte would have stood up for the $ for housing, that the deciders would have listened to those of us who spoke out for working for the needs of all our citizens & residents, but on this past Monday evening, the Planning Cmte voted unanimously for recommending to our full Common Council that the Land Disposition Agreement for that site be amended to remove that requirement.

“Timothy Sheehan, Executive Director of our Redevelopment Agency, said that this public hearing on Monday, October 5, was ‘required by the State.’  At the beginning of the hearing, Doug Hempstead, Chair of the Planning Cmte, said that the public hearing “was required by HUD.”  This hearing at the last minute, the 11th hour plus, was a sham! *

“I was misquoted in our local paper, The Hour:  “Resident Missy Conrad charged the city with removing affordable housing from the site at the 11th hour,”  which was not what I did say.  I realize that housing will not be built on the site of the mall;  but I do stand with our Fair Housing Officer Margaret K. Suib & a few others who have supported holding GGP accountable for the good & Legal inclusion of money for affordable housing.

“Unfortunately, Doug Hempstead & others feel that Norwalk has done its part in providing enough affordable housing & do not care to provide more while our neighboring municipalities do not do their fair share to ‘promote the general Welfare.’   But, moral principle does not say, ‘They are doing something wrong, so I’ll do it, too.’  Norwalk can be an example of the highest, inclusive standard to bring along our neighboring towns, those very towns from which the new, upscale mall must draw.

“Margaret Suib outlined the reasons to require the money for housing in the online news site nancyonnorwalk.com of Tuesday, Oct 6, in the comment section, pp7-9.

“* Is there anything that you at the State can do, since you do have the knowledge about the terrible need for affordable housing that too many people do not or will not recognize?”

“Thanks for your email and I certainly understand your concern,” Duff wrote back. “Keep in mind that I am pushing very hard for the affordable units at Washington Village and have worked hard on the Wall Street development, which is 30-40% affordable. While we may have lost housing here, the state has invested close to $1 billion over the last five years in affordable housing.”

Duff doesn’t send press releases or anything else to communicate with NancyOnNorwalk’s readers. Thanks to Conrad for sending along the email.

“It is good that our state is now allocating $ for affordable housing, which has been so neglected for years.  We do look to our government ‘to promote the general welfare,’” Conrad wrote back to Duff.  “However, our government & community volunteers & religious & other moral people must require business to do its fair share as well, not merely squeeze the most money for itself out of a project.  General Growth Properties (GGP),  the developer of the 95/7 upscale mall with boutique hotel, needs to be told that we in Norwalk, for us & our neighbors in this region, expect, need, & require the money for affordable housing that is in the Land Disposition Agreement that GGP now holds, but changes to which We the People must agree.  Please be strong.”

Simms: No opinion on 35-65, but ‘affordable’ isn’t affordable

NancyOnNorwalk asked Common Councilman Travis Simms (D-District B) about the “35-65” idea last week, looking for an opinion about whether it was a dead issue. He brought up Councilman Doug Hempstead (R-At Large).

“I will defer to Doug regarding that,” Simms said. “However I am always pushing for affordable housing, but, again, I kind of want to get away from the ‘affordable housing,’ because ‘affordable housing’ that’s being generally used by the developers and by certain city officials is not really affordable to the residents that live here in South Norwalk, or Norwalk in general. Paying $3,800 or $4,500 a month is not really affordable. I would like to see the language changed. If we are going to talk about affordable housing, let’s put real low affordable income housing in the city to help folks out. That’s not just our residents, that’s our firemen, our EMTs. They make pretty good money but if you look at the cost of living in Fairfield County it’s erroneous. It’s expensive to live in and a lot of folks can’t afford it even if they are making $100,000 a year. It’s tough to live here in the city of Norwalk and I think that we have to deal with that issue before we deal with any other issues going forward because I think the affordable housing is not affordable here in Fairfield County. … Are we trying to help the people or are we just trying to soften the palate for the developers and help the developers continue to build and marginalize the folks in the city?”

On Monday, NancyOnNorwalk posted a story with an agenda to Tuesday’s Council meeting because the agenda was not on the city’s website over the holiday weekend. Given that City Hall was closed for Columbus Day, it seemed like the right thing for a government watchdog website to do.

There was no Freedom of Information Act violation in not posting the agenda online, but the agenda, and all the backup materials, were posted to the city’s website Monday afternoon, City Clerk Donna King said in an email.

“Sorry for the oversight on Friday,” King wrote. “We opened up City Hall today and made sure it was posted.

“We strive to post by Friday afternoon but a mistake/oversight occurred in the office.”

The backup materials, a.k.a. the Council’s packet, include reams of information regarding the proposed changes to the Land Disposition Agreement (LDA) for the 95/7 site – a.k.a. The Reed-Putnam Urban Renewal Plan parcels 1, 3 and 4, a.k.a. that big field of dirt next to the Macedonian Church on West Avenue – that would allow GGP to build the mall it has been dreaming of.

Mosby keeping the heat on NEON

Norwalk Economic Opportunity Now (NEON) is in bankruptcy court, and one of the people listed in court documents is “John Mosly.”

That would be John Mosby, objecting as one of the “original 33 NEON Board of Directors” and urging the court not to allow NEON to sell property at 67-71 Henry St. in Stamford

Mosby filed suit against NEON in October 2013, challenging NEON’s right to go bankrupt in the context of its board being illegal. NEON changed its bylaws and illegally forced Mosby and other elected board members out on Dec. 12, 2007, said Mosby, a board member from 1999 to 2007. The NEON board, led by Carvin Hilliard, voted to kick the 11 elected community members off the board, Mosby said in 2014. The vote was illegal because the then 33-member board did not have a quorum, he said.

“I am request the bankruptcy court order allow me to continue my appeal and other litigation,” Mosby wrote to the court on Sept. 2.

Mosby’s complaint against NEON has been dormant since January, but there is a hearing scheduled for Oct. 30.

As a lifelong democrat, I have been driving around seeing Maggio and John signs side by side are they running together , I thought she is republican

I am a Republican. East Norwalk is small. John and I both grew up here and are close in age. We have some of the same friends. We even have many of the same supporters! That being said, John and I, although from opposing parties, worked very well together over the past 2 years with our cities best interest at heart. Believe it or not, things get accomplished that way!
Greg, I am happy to answer any other questions you may have for me. 203.854.4847