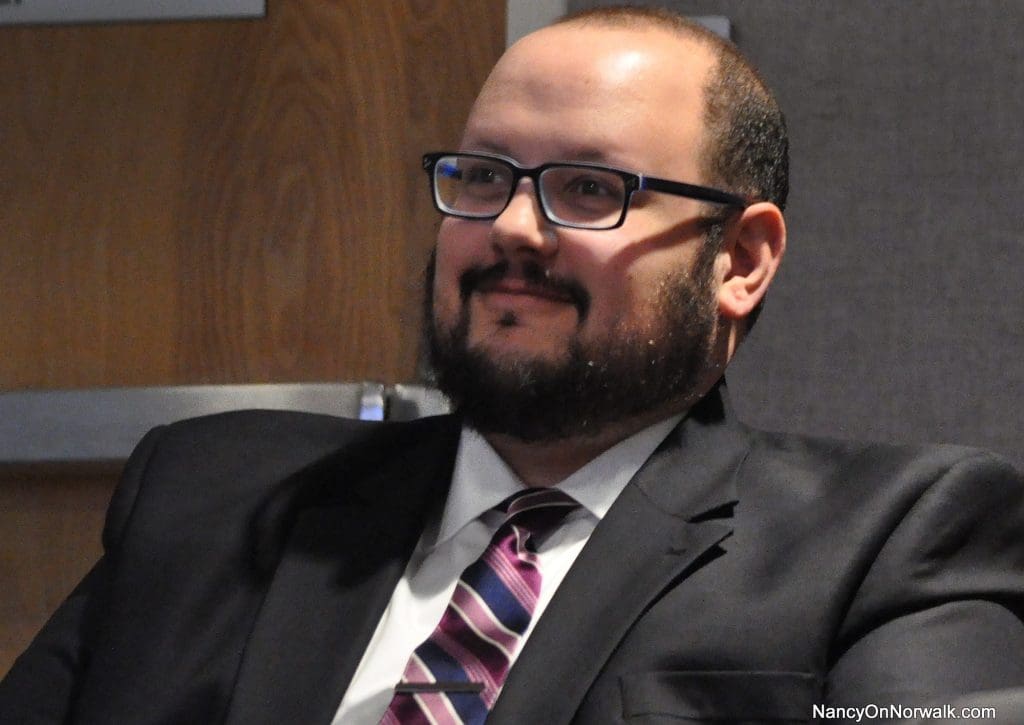 NORWALK, Conn. – Here’s what we have for you in political notes today:

Hempstead’s reply did not arrive in time for inclusion in the story on Morgan. But on Wednesday, Hempstead wrote:

“Well so much for the grant writing experience being a component of consideration for the job. Unless you get that experience by osmosis’s. {sic}

“The result  unfortunately is what I anticipated would happen.”

On Thursday, he wrote:

“It doesn’t surprise me on who they picked and the fact that the person has no experience {in} grant writing.”

Hempstead’s “osmosis” comment may refer to a remark by a Council member to NON that Morgan was close to the grant writing process at Planned Parenthood.

“We do not have a lot of money,” Norwalk Democratic Town Committee Chairman Ed Camacho said on May 23, at the DTC meeting. “We have an election coming up in November and to my knowledge, this is the first time that we are not in the position to have a campaign headquarters. Norwalk has a slew of votes, Democratic Votes. I think it’s important that we have a base from which to operate, on behalf of Ned Lamont as well as on behalf of our locally endorsed candidates.”

“A year ago wasn’t the best year to run as a Democrat but I think that now we have the wind at our backs with the Trump effect,” Camacho said. “It is important to capitalize on that. So, this year of all years, not to have campaign headquarters, not to have money for that, would be a shame.”

Norwalk Democrats won last year’s election in a landslide and now dominate the Common Council, 14 to one.

“We should all be keeping fundraising and contributions top of mind,” DTC Deputy Treasurer Stephanie Thomas said. “I think it’s hard in mid-term year because we are all are already digging deep for local candidates and statewide candidates but we are very close to running out of money.”

“That was a large space and we didn’t bear the expense solely. We shared that office with the mayor’s campaign, with the Common Council people and the Board of Ed,” Camacho said.

Camacho said Sunday that Democrats need to raise some money, expressing optimism that they’ll have an headquarters after the primary in August.

On Saturday Camacho sent  out an appeal for cash on behalf of a candidate.

“She is a mother of three children and a CPA that brings 25 years of accounting and finance experience working with small companies. After 1 week, she is about 70% there on her $5,100 goal and almost 50% there on her goal of 150 people from Norwalk or New Canaan, to qualify for the Citizen’s Election Program,” Camacho wrote.

‘Small news’ from Barbis: No layoffs

During the recent debate over school funding, many expressed concern over possible layoffs if the city did not fund the Board of Ed’s full budget request.  At the DTC meeting, Board of Education Chairman Mike Barbis said the Board would be finishing its budget soon.

“You’ll probably be hearing some small news about that,” he said. “But I think we are not going to fill some empty positions, no one is going to lose their job but some positions will not be filled. There will be some early retirements for some people.”

The BoE requested a $9.9 million increase for its 2018-19 operating budget, with the Common Council eventually authorizing a $6.4 million increase, a 3.5 percent increase, which included a nearly $3 million drawdown from the fund balance, or Rainy Day Fund.

“The ‘Board of Ed’ was fully funded for all the positions that they had, along with the increases in their payroll system,” Hempstead said in April. “This (funding) is allowing them to do some additional programs.”

BoE members emphasized their desire to expand the high school program of study and lengthen the school day at six elementary schools, in accordance to their strategic operating plan which many Board of Ed members have described as “highly successful”.  The district in February announced that it had done very well in the 2016-17 Next Generation Accountability Report, placing at the top of its District Comparison Group (DRG) for the first time, ahead of Stamford and other districts similar to Norwalk.

The high school program of study expansion would increase the credits required for graduation from 20 to 25, with a successful “capstone project” as the 26th credit, interim Chief Academic Officer Craig Creller said in March. The existing 20-credit program must be phased out by 2022, by state law, Creller said.

Retiring DPW Director Bruce Chimento’s position cannot not be advertised until the Council decides what it’s going to do with Rilling’s request to re-organize city administration, because the DPW position has not been defined, Assistant to the Mayor Laoise King said last week.

Chimento turned in his retirement letter last week, King added. Rilling has proposed creating a Chief of Public Works and Operations; if the Council decision on that is made six months from now, then Rilling will only have 10 months left in his term and any job candidate will consider that, given that they will be working at the pleasure of the Mayor, King pointed out.

Finance Director Bob Barron said that might not really be a factor.

“I just remind you, Tom Hamilton worked for both Democratic and Republican Mayors for a span of 12 years,” Barron said. “These are pretty senior level positions. I think these people come with a set of accomplishments that are going to support the mayor, no matter who it is. So I am not as concerned as someone being hyper concerned about an expiring term. If you are good at what you do and you are delivering, a Mayor is going to value that contribution.”

Rilling said he didn’t disagree but his experience is that when a candidate has that explained to them, they hesitate. They also hesitate when the Mayor is new, given that they are leaving a stable job, he said.

Chimento will be leaving at the end of September, King said.

Rilling in November: ‘Span of control’ difficult to manage

In a lengthy pre-election 2017 interview, NoN asked Mayor Harry Rilling to address calls by opponent Lisa Brinton that Norwalk hire a professional City Manager.    Rilling said he opposed the idea, noting that a City Manager might be someone who “comes in, builds their resume, and then moves on someplace else”.

Rilling did not mention a need to re-organize City Government, but did note the difficulty of managing so many direct reports.  Two of those direct reports — King and Norwalk Director of Personnel and Labor Relations Ray Burney – recently said in presentations on the proposed reorganization that the Mayor has more than 20 direct reports, with Burney calling that “way too much.”

In November, Rilling listed his direct reports: “There’s a police chief, the fire chief, finance director, Planning and Zoning, recreation, parks,” Rilling said. “God, DPW director, and there’s a whole host of human relations. There’s my staff in my office. There’s my Corporation Counsel. I don’t know how many I’ve gotten so far, the last time I counted, it was about 17. I know the Finance Director has a few people, but I count IT because they report to me. I count the tax collector, even though he oversees the operation, but they all report to me.”

Rilling said that Brinton “mentions that you need to have somebody in place to do a lot of the things that a city manager might do, and she refers to I believe in one of her websites a director of operations. I have what is the equivalent of a director of operations in my mayoral assistant, so I’m able to have all the things that need to be done checked upon and evaluated to see the progress on a regular basis.”

King grew up in Westport, moved to Norwalk in 2013 and worked as deputy chief of staff/legislative director for New Haven Mayor John DeStefano from July 2007 to January 2010. King received her Juris Doctor from University of Denver College of Law (1999) and from 2002 to 2005 worked as an Assistant City Attorney for the City of
Denver, according to a biography she provided NancyOnNorwalk in 2015.

She “lives in Norwalk, she knows the community, and I’m able to say to her, ‘Okay, check on this project, check on that project. How is this one going?’ She can go out and do those things because I have a span of control of about 17 or 18 department heads. That’s a span of control that’s really very difficult to manage,” Rilling said.

Last month Rilling said King is the equivalent of a chief of staff.  The re-organization envisions giving her that title and a $36,000 increase in pay to $140,000.  Some opponents of the re-organization have alleged that its sole purpose is to give King a pay raise.  Brinton in a comment on NON advocated that King’s raise be funded from Rilling’s existing salary.

A thought for Zullo

NancyOnNorwalk sent an email to a number of people last week, asking for responses to the passing of former Mayor Frank Zullo.

Former District A Democrats Chairman Broderick Sawyer on Wednesday said he had been out of town, and wrote:

“Mr Zullo was a good guy, my Mom adored him and always spoke highly of him. She definitely voted for him every time as well as my brothers.

“When I first saw him at our district meeting as chair I told him that and he was very gracious. In our meetings he was a valued resource and voice of reason for all.

“He will be missed and my condolences to his family.”

This ‘span of control’ has been in place for decades. A paid (and highly-paid at that) Assistant to the Mayor is something that Norwalk’s last several decades of mayors didn’t have.

So, Norwalk is now effectively paying for Two Mayors and the ‘span of control’ is too big. It seems like the problem with efficiency might start at the Mayor office’s front door.

Why does our one Party Democrats need a headquarters or budget. Re-election is assured.

Everyone expects a DPW “soft hire”. Not using Professional Searh to secure Top Talent. Odds are the soft hire has already been “identified”.

Has anyone asked the Mayor why he didn’t use Consultants on reorganizing City Hall ? Or why to the best of my knowledge no City resident with significant business management experience has positively commented with the Mayor’s Re-org plan. Especially putting an Asst w/o senior management experience in a “Chief of Staff” position.

Even freshman business students know that a Reorganization Plan that doesn’t save major amounts of funds is a non-squitur. Are there any team members in City Hall with MBA’s ?

The hard-boiled rendition of Mr. Morgan’s duties for Planned Parenthood on his Linked-In page, that he “…develops marketing strategies and introduces the ‘brand’ to the public; (and) reports how marketing strategies are affecting patient activity…” is more than a little off-putting and somewhat heartless considering Planned Parenthood’s brand of “services” and the “market” that it serves. Considering the growing body of revised opinion about Planned Parenthood’s founder and the origins of its purpose, the appointment of Mr. Morgan seems somewhat politically tone-deaf; this irrespective of his skills and expertise which, I’m sure, are substantial.

If the job is too big, just resign and let the professionals handle it.