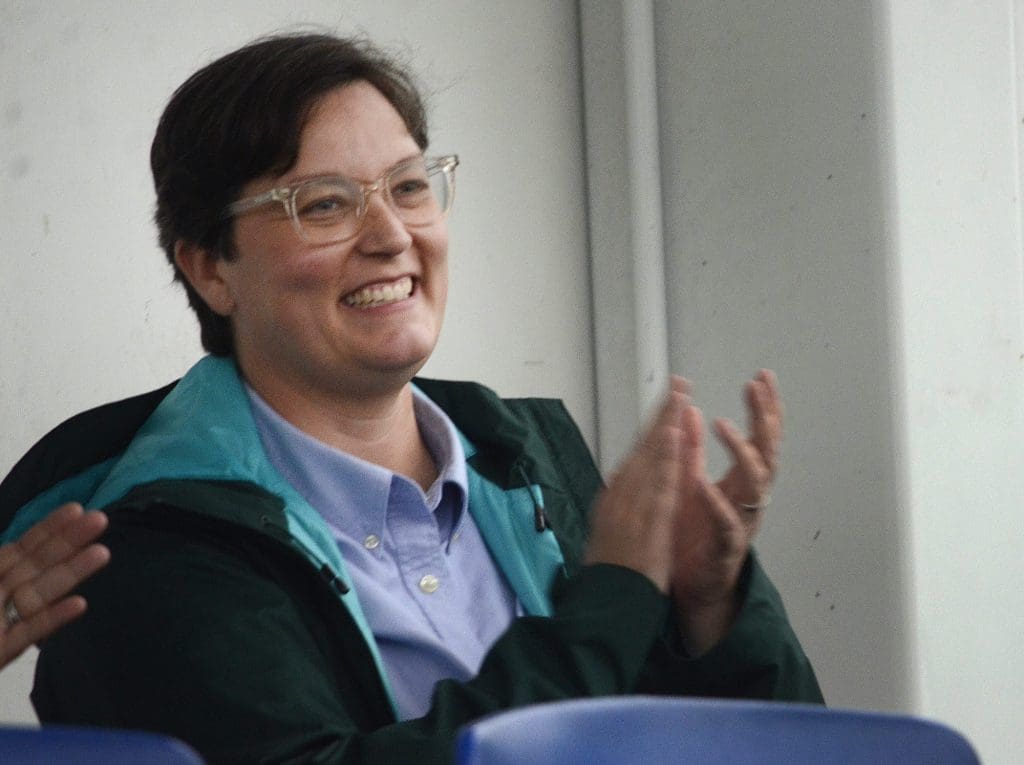 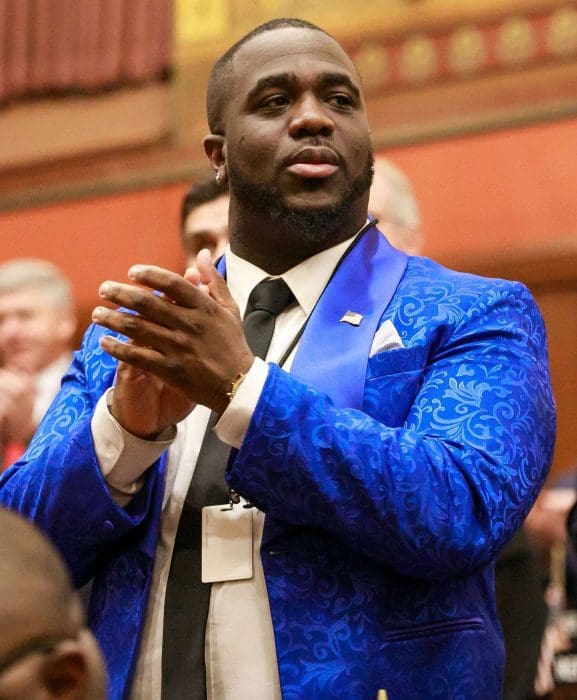 Johnson given send off

Dominique Johnson has been sworn into her new role as District 143 State Representative. The Democratic Town Committee meets Monday to consider a replacement for her Common Council at Large seat.

DTC leaders didn’t respond to an email asking who has submitted letters of interest.

Johnson bathed in the glow of loving praise during her last Council meeting as Democrats lauded her for more than 10 minutes.

Johnson “has been a tireless advocate for what is just what is fair and what is right,” Council President Greg Burnett (D-At Large) said. “…We are sad to see you leave but elated that you are going to take your hard work and wisdom and make a true impact as a trusted advocate in Hartford for all of Norwalk residents.”

Josh Goldstein (D-At Large) called Johnson “immensely thoughtful, one of the hardest workers I have ever seen.” Lisa Shanahan (D-District E) said Johnson was the “voice of reason.” Tom Livingston (D-District E) said he’d learned from Johnson and Heidi Alterman (D-District D) said her children fell in love with Johnson when they were out campaigning together because, “They had a lot of fun palling around and being silly.”

“I’m emotionally overwhelmed by love in this room and online, gratitude is the most of my heart,” Johnson replied. As for going to Hartford, she commented, “Earlier today, Senator (Bob) Duff said when local and state work together, we can get magnificent things done. And that’s exactly my intent, to go up there to keep be a part of that and do that.” This comes to NancyOnNorwalk’s attention via a Tweet from former Republican District 25 State Senate candidate Daniel Miressi, the latest opponent to get beaten soundly by Duff.

“Shocker – I was selected in a ‘lottery’ to be audited by the Lamont regime,” Miressi posted Dec. 13. “I guess they didn’t like that Bobby lost Darien, the debate, and all credibility…. They will try anything to dissuade a citizen candidate and a CT FIRST AGENDA! Don’t worry, it won’t work.”

He also said he “didn’t take the state election welfare,” a reference to Citizen’s Election Program funding, and unlike Democrats “followed the letter of the law.”

A guide for candidates who don’t participate in CEP explains that SEEC “will review all statewide office candidate committees and no more than 50% of General Assembly candidate committees.” The candidate committees will be “selected by a randomized lottery which is weighted by taking into the account the frequency with which a particular legislative district was reviewed during the last three preceding regular elections for that office.”

District 25 was also audited after the 2018 election, according to the information provided by Foley. It wasn’t audited in the four previous elections.

Neither Lisa Brinton, who ran for D25 as an independent, nor Duff responded to an email giving them a chance to comment. 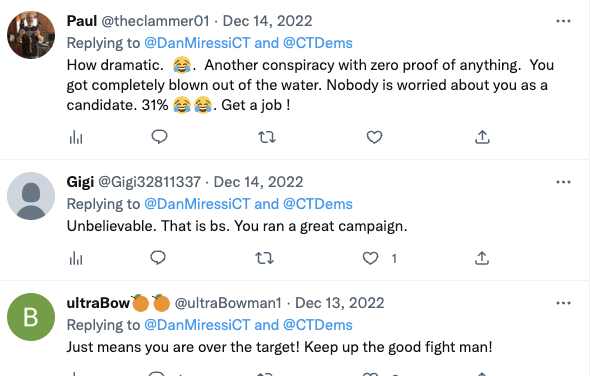 Miressi’s Twitter account has 1,681 followers. He recently promised that a new episode of his podcast is coming out next week.

His post about the audit prompted Michael Goldstein to reply, “Dispicable!” (cq)

“I’ve been a treasurer for multiple state rep campaigns. They audit nearly 50% of all CEP campaigns,” Patrick Johnson replied.

“I believe the SEEC is an independent agency,” Darren Cunningham said. 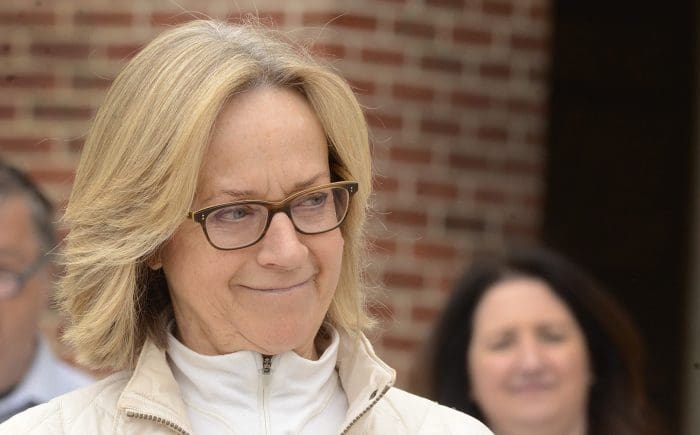 Former State Rep. Terri Wood (R-141), who unsuccessfully sought the Republican nomination this year for Secretary of State, has joined Yankee Institute as a fellow.

Wood was interviewed in Yankee’s first Y CT Matters podcast of the year, the day Gov. Ned Lamont was inaugurated and the Legislative session began. She had watched the House proceedings and said House leadership is very focused on rising above national discord.

“I’m deeply enthused about what’s going to get done this year, because they are such good people with good hearts, and also significant intelligence,” Wood said.

Wood also described the process of the Legislature’s first day and her experiences working under COVID. Regarding public hearings, she said citizens can make their salient points in the three minutes allowed.

You can listen to the podcast here. 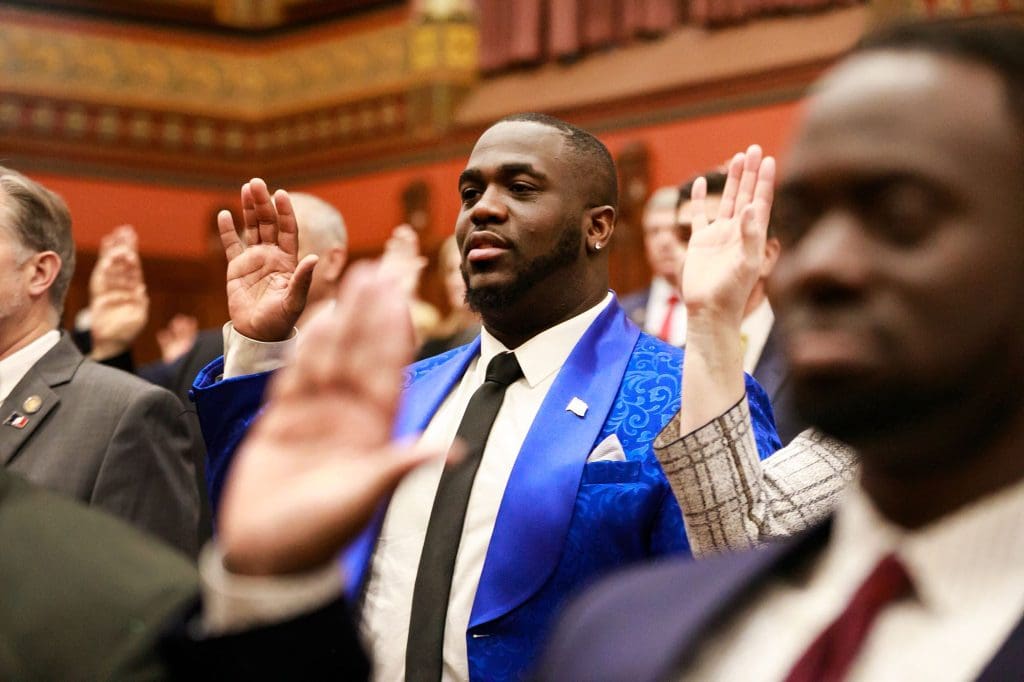 Kadeem Roberts was sworn into his new role as District 137 State Representative last Wednesday. He will serve on the Committee on Children and the Housing and Education Committees for the 2023 Legislative Session, a Monday press release said.

“Wednesday was an exciting day and I am looking forward to working with my colleagues this session,” Roberts was quoted as saying. “I am honored and privileged to represent my constituents in the 137th District.”

Roberts served one term on the Council from 2019 to 2021 before running last fall to replace Chris Perone in the legislature. Perone retired after 18 years as State Representative.

This is a clear and abusive pattern established by the SEEC and it is very, very chilling. In my opinion, It is a process designed to make sure no one dares to run against the system.

In 2018, Marc D’Amelio’s campaign was audited as well, supposedly at random. This is a very, extremely time consuming full body cavity inspection of the use of the grant and its reporting that that resulted in dozens of pages of concerns, case history, and applications of the law that aren’t really covered in the plain English in the citizens elections guide (100 plus pages) they publish every year.

For example, they will want to see secondary payee information. So your printer may need to provide receipts for its paper and ink. If they manufactured their own paper and ink, they’d need to get records from the paper pulp supplier. Signed contracts or representation of any verbal contracts including but not limited to services provided. They will want time sheets of any campaign workers. All email correspondence between campaign officers and campaign workers. Etc…

After they get this information, they may or may not get back to you with the final ruling. For the D’Amelio for senate campaign, we responded with 19 documents on 12/5/2019 and still have NO response as of today.

Here’s the kicker. Since the audit was never formalized we are not allowed to see what the audit for the opponent (Duff) involved. So we were never able to tell if his campaign was subject to the same scrutiny. My guess is a big fat NO.

The lesson learned here is to never bother with running for office again or supporting someone in their effort as treasurer with respect to Citizens Election Program (CEP)..

I’ve done 10 of these now and will never do another one again. CEP system is corrupt and foul and has done absolutely nothing to stop dark money.

Duff still has an illegal PAC that no one will do anything about and the Governors have used over $50 million in outside money over the past few campaign. Even when the system cited Malloy for violating laws, it was a simple slap on the wrist and a fine. Remember when he took the $6 million grant and used it for things like flying to the Democrat Governors dinner where he raised millions more?

I’m over it. But when the time for CT comes to pay the piper, this system is exhibit B (exhibit A being the income tax) for what ruined the state’s governance.

To clarify Duff’s illegal PAC. It’s the Third Street PAC that takes money from lobbyists and labor organizations and doles it out to other campaigns and causes. One of the causes is noble in that the NHS band is a benefactor. That’s not illegal, but what is illegal is Bob’s picture that comes along with it. That’s the same picture his campaign uses and has used for the last decade plus. That is an illegal coordination, but more importantly this type of activity was the reason for setting up CEP in the first place. So that this type of promoting of candidates would stop. Duff has Galen Wells running it now to make it legal , but regardless, it is completely unethical and in direct violation of the spirit of CEP.

The way the system is abused by people like Duff makes CEP another waste of taxpayer money. $50 million could buy a lot of school books, pay a lot of teachers, and fix a lot of roads.

Bryan is 1000% correct! I was part of that campaign and Nancy released all the information that was uncovered and all the illegal things Bob was doing then and still does. The fact that Marc’s campaign and now Dan’s are magically “audited” really!? That’s a joke and no one is laughing except of course Do Nothing Illegal Duff. And funny how his party lets him just get away with it. It kind of reminds me of a certain laptop.

Apparently, Norwalk Republicans are special targets for Bob Duff. A few years ago while acting as treasurer for a municipal candidate, the SEEC hits me up with a $100 fine for a 1-day late filing of a disclosure statement on their eCRIS system. The notice letter threatened all sorts of horribles if I didn’t pay up– out of personal funds! Speaking to other treasurers at the time and later across the state, such strict enforcement of a deadline was highly unusual.