After a long career in Democratic politics, Donna King has retired from her role as Norwalk City Clerk.

King was given a sendoff at Tuesday’s Common Council meeting, held via Zoom, with a surprise: her son appeared in one of the boxes.

“My first memories of my mom getting passionately involved with the city and in politics go back to when my brother Greg and I were pretty young,” the younger King said. “As mom became more active in the election process, she recruited the two of us to ride our bikes around the neighborhood and put political flyers on people’s doorknobs. And it was actually a lot of fun.”

He has clear memories of stuffing envelopes at Democratic headquarters, but he was proudest when his mother ran for Common Council and won, and won reelection multiple times, he said.

“One of those times after I turned 18, on my first chance to cast the ballot, I was able to vote for my own mother. And I still remember being in my dorm room filling out that absentee ballot,” he said.

Donna King has served as City Clerk for eight years, ever since Mayor Harry Rilling began his time in office. She was an executive assistant to the Office of the State Treasurer for 14 years, ending in 2013, according to her LinkedIn page.

She served as Democratic Town Committee chairwoman for seven years and has often led District D for the Democrats.

“Mom, you’ve dedicated much of your life to the city of Norwalk, the state of Connecticut, and of course, to your family,” Aaron King said. “…I’m so proud of you.”

Accolades came from other directions as well, as multiple Council members thanked her for being a great resource.

“You are a staunch Democrat, you manage with toughness but with integrity, and I see that with tenderness when it’s necessary. And I saw that with your son speaking about you,” Council member Darlene Young (D-District B) said.

Council member Greg Burnett (D-At Large) said King has “mined the pipeline” and brought new people along in politics “with such eloquence and patience to make those that were interested understand the process in a very easy manner. And that’s, that’s no easy feat to do.”

Rilling said King brought the position of City Clerk to “a whole new level of professionalism.”

King said, “I just want to say that I really enjoyed working with this Council. And, all those who came before you. It’s been great. The Mayor knows that I think this is the best job I ever had. And, and he’s what makes it so.”

As Council members lauded and thanked each other in the last Council meeting for some, Young made an unusual request.

“I’d like to see the real George Theodoridis before we leave today, if we could make that happen. Show your face. We’d love to see that; I heard your voice, but I’d love to see your face,” she said. 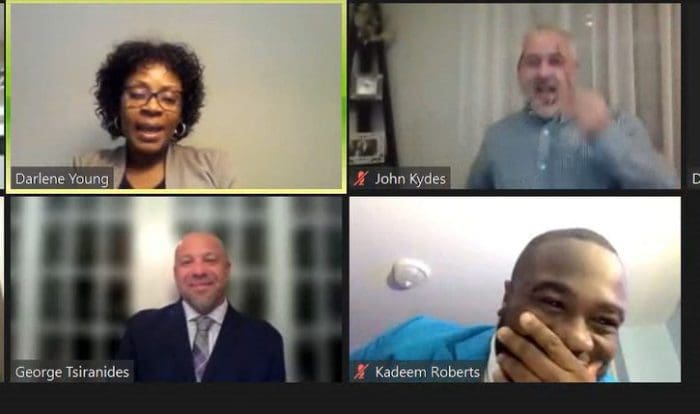 Theodoridis was elected to represent District C on the Council two years ago but has not, to NancyOnNorwalk’s knowledge, ever spoken up at a City meeting. When Young made the request, his name wasn’t even showing on the computer screen, let alone his face.

He appeared a minute later.

“Where is he?” Young asked, before spotting the appropriate rectangle. “You know what, George, sometimes we do things and at least you know, it was two years. And you were on the Council. It was an experience, you can say you had one, right?”

That was the extent of his public speaking.

The gang waves at Common Council member George Theodoridis (D-District C), who they haven’t seen much of.

The Common Council voted Tuesday to accept grants totaling $90,350 in support of the Norwalk Police Department.

“These are typical grants that we would we traditionally have applied for, but there was, at one point, a requirement to provide ICE (Immigration and Customs Enforcement) data. So basically … the City at the time, did not want to provide ICE information to be able to receive grant funding. So we did not take that funding,” Health and Public Safety Committee Chairman Nick Sacchinelli (D-At Large) said Oct. 28.

“The stipulations related to sharing of data with ICE have been lifted,” Deputy Norwalk Police Chief Susan Zecca said.

Congrats on the retirement Donna!

Congratulations to Donna for her distinguished career in public service at the state and local level and for her many successes in leading the Norwalk Democratic Town Committee for many years. Donna was chair of the Party when I ran for Mayor in 2001 and was a tremendous leader in our campaign that resulted in winning City Hall and all 15 Council seats. I thank her for her support in my campaigns and for our successful collaboration in many civic and political activities over the past 40 years. Well done, Donna!