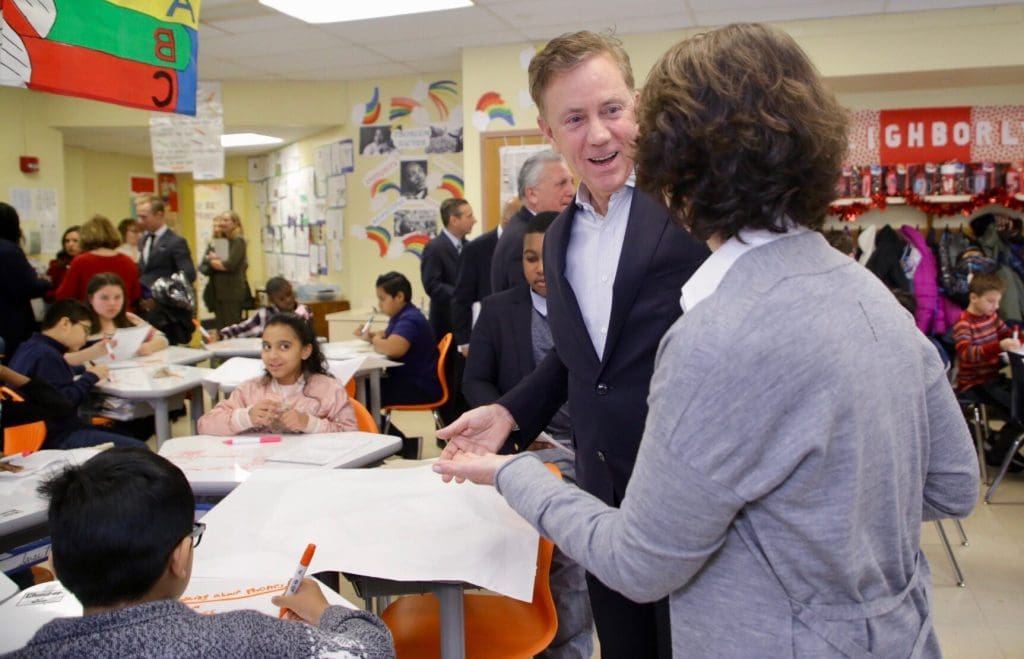 NORWALK, Conn. – Some Norwalk announcements for you:

Lamont made opening remarks at the start of a roundtable discussion and school tour hosted by the Dalio Foundation at Tracey Elementary School.  The roundtable highlighted a report from The Aspen Institute National Commission on Social, Emotional, and Academic Development (SEAD) titled, From a Nation at Risk to a Nation at Hope, according to a Lamont press release.

The report synthesizes decades of research, findings that “affirm that social, emotional, and cognitive development are intertwined and essential to children’s academic learning and success,” according to a Dalio Foundation press release. “The report, which exemplifies the value of listening to and learning from students, families, educators, and community leaders, is a call to action to improve educational outcomes for all students through a holistic approach.”

Lamont told a WTNH reporter that Tracey is an example of educational best practices. The Norwalk Board of Education has recently been touting Tracey’s success with its Character Education program, which incorporates core values into academic instruction, the Board’s Curriculum and Instruction Committee members wrote in December. 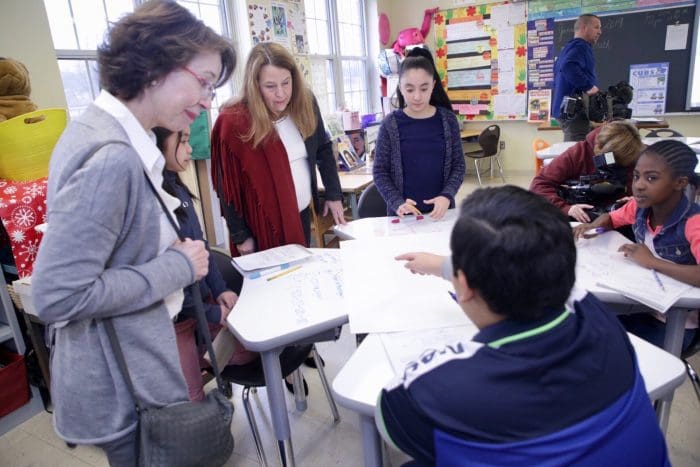 “As a community, Norwalk is working hard to create a cohesive K–12 ecosystem that provides holistic support to all children,” the Dalio press release states. “Norwalk Public Schools and Norwalk ACTS are building productive partnerships between schools, community non-profits, faith-based institutions, and foundations to advance this vision and support healthy learning and development in and out of school.  If successful, Norwalk’s collaborative efforts to support students’ social, emotional, and cognitive development will lead to improved attendance, grades, test scores, graduation rates, and success in college and careers, as well as to more engaged citizenship and enhanced overall wellbeing.”

“We’re very hopeful about what the SEAD Commission heard from communities across the country, and what science tells us about how children learn.  Teachers tell us how important social and emotional learning is for the development of the whole child,” Barbara Dalio, Co-Founder and Director of the Dalio Foundation, is quoted as saying.  “It would be so exciting for Connecticut to lead the nation in social and emotional learning, and academic development.”

“The Dalio Foundation is deeply committed to seeing all of Norwalk’s young people thrive,” Norwalk Superintendent of Schools Steven Adamowski is quoted as saying. “The SEAD Commission’s report is a strong affirmation of the Dalio Foundation’s holistic and collaborative approach to strengthening public education.”

Simms to serve as Vice-Chairman of Transportation Committee 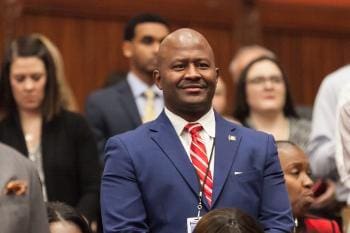 State Rep. Travis Simms (D-140), in a photo from his House Democrats webpage.

Former Common Council member Travis Simms has been officially sworn into his new role as District 140 State Representative and will be serving as vice-chair of Transportation and a member on the Appropriations, and Environment Committees, according to a press release.

“I look forward to working on all the important issues that will keep these committees very busy this session,” Simms is quoted as saying.

“The Appropriations Committee oversees all matters relating to appropriations and the budgets of state agencies. Other issues under the committee’s jurisdiction include matters relating to state employees’ salaries, benefits and retirement, teachers’ retirement and veterans’ pensions and collective bargaining agreements and arbitration awards for all state employees.

“The Environment Committee oversees matters relating to the Department of Energy and Environmental Protection that include conservation, recreation, pollution control, fisheries and game, state parks and forests, water resources and flood and erosion control; and all matters relating to the Department of Agriculture, including farming, dairy products and domestic animals. 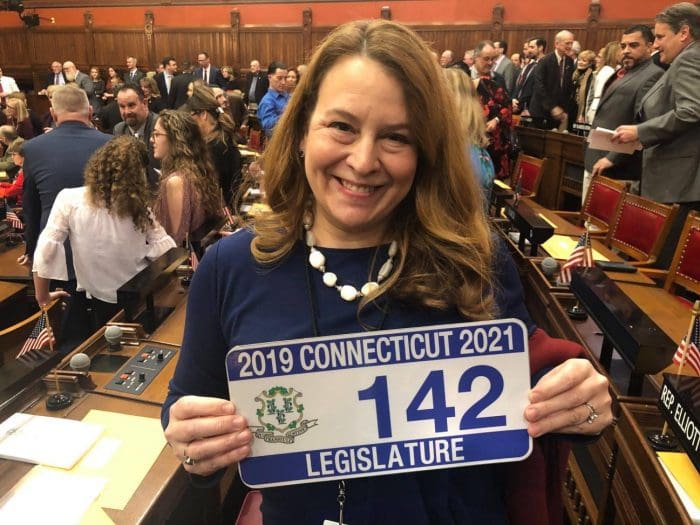 “Today, I was officially sworn in as the State Representative from the 142nd House District in a morning ceremony in the State Capitol. As I join the legislature, I look forward to serving my constituents in Norwalk and New Canaan, making government more responsive and working hard for them in the upcoming session.

“I will be serving as the Vice Chair of the Insurance and Real Estate Committee and will also be a member of the Appropriations and Human Services Committees.

“The Insurance and Real Estate Committee has cognizance of all matters relating to insurance law and real estate law. The Appropriations committee is the General Assembly’s budget-writing committee. Other issues under the committee’s jurisdiction include matters relating to state employees’ salaries, benefits and retirement, teachers’ retirement and veterans’ pensions and collective bargaining agreements and arbitration awards for all state employees.

“The Human Services Committee has cognizance over all matters relating to the Department of Social Services, including institutions under its jurisdiction, the Office of Protection and Advocacy for Persons with Disabilities and the Department of Rehabilitation Services.”

“The City of Norwalk would like to remind federal employees of the state and local resources available to help during the ongoing government shutdown,” a Wednesday press release from Norwalk Communications Manager Josh Morgan said. “Person-to-Person has waived income guidelines for its food pantry for federal employees. The Norwalk Human Relations and Fair Rent Department can also provide referrals for additional resources.”

Lamont also issued information for federal workers Wednesday, with a press release announcing that “a public-private partnership between the State of Connecticut and private banks, led by Webster Bank and supported by the Connecticut Bankers Association, will enable essential federal workers who are required to report to work without pay to receive unemployment assistance.”

The country is in its longest government shutdown in history, due to an impasse between Democrats and Republicans over President Donald Trump’s request for funding to build a wall along the southern border.

The state legislature is working to “emergency certify a bill that would ensure Connecticut is able to take advantage of any decision by the federal government to permit essential workers to collect earned unemployment insurance benefits,” Lamont’s press release states.

“Residents looking to learn more about their unemployment assistance eligibility, or {who} would like to apply, should contact the Connecticut Department of Labor online or contact their local American Job Center,” the release states.

“Many people live paycheck to paycheck, and without their expected income, they might be forced to choose between paying the mortgage, buying groceries, or filling a prescription,” Mayor Harry Rilling is quoted as saying. “I am thankful for the resources available here in Norwalk through our Human Relations Department, and for the wonderful organizations, like Person-to-Person, that do so much for our community.”

Dathan is showing off her license plate that exempts her from how many state/local taxes? She tells us she is on two committees…at how much more per year? $5-$10K each? Will she be reporting legitimate travel expenses, unlike many of the members of the state legislature?
So many rules and perks for the folks that serve us.

I’d like to give a big shout out and thanks to one of our hardest working and longest serving State Representatives, Gail Lavielle, who represents us in the 143rd Assembly District, as she begins her new role as Ranking Member of the Appropriations Committee in Hartford.

If you’ve followed Gail’s work over the years, you know she’s spent many a late night on the House floor during budget negotiations. We are honored to now have Gail as the Ranking Member of the Committee that writes our budget.

Gail, you’re still not getting home early!! Thanks for your service.