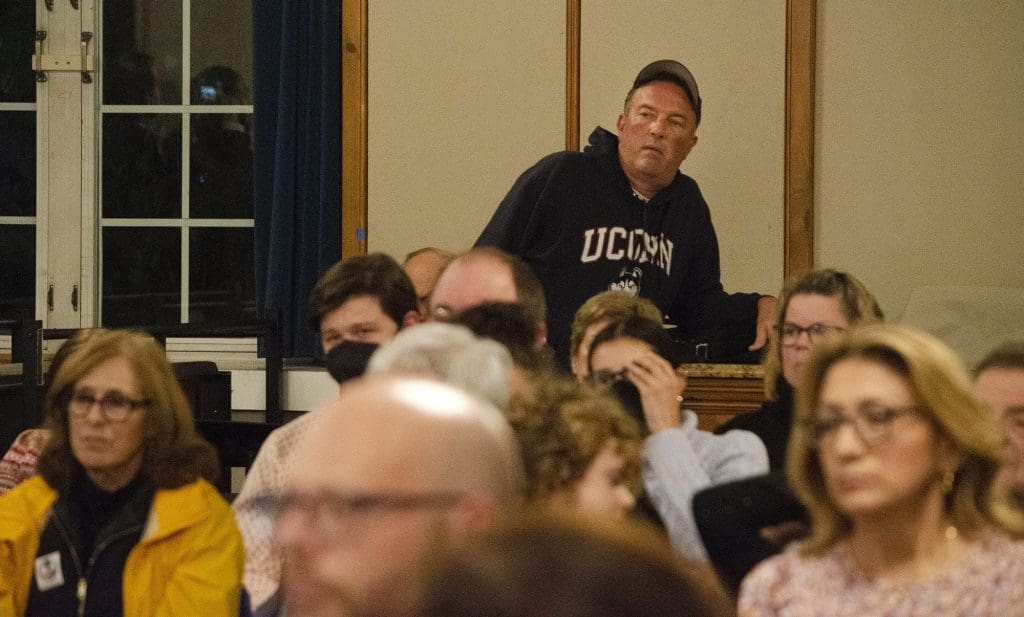 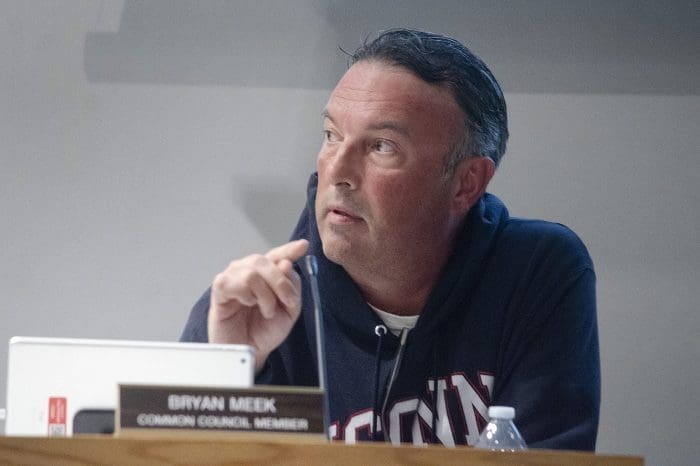 Council Minority Leader Bryan Meek (R-District D) has been vocal about the City lawsuit filed against real estate broker Jason Milligan, arguing that its merits should be publicly discussed. Yet Meek did not attend the recent Council/Redevelopment Agency executive session on the lawsuit, where Council members got an update from City lawyers and could offer input.

The meeting began at 6:30 p.m. with a public speaking session. Meek sat through that and a delay due to technical difficulties, before telling Mayor Harry Rilling that he was leaving at about 7:10 p.m., saying “I’m done for the night.”  On his way out the door, Meek told an audience member that he was sorry but he had to work.

Meek went downstairs and watched the League of Women Voters State Senate District 25 debate in the community room, leaving when it ended at about 8 p.m.

Meek is close to Independent District 25 State Senate candidate Lisa Brinton. She said he does not work for her campaign this year.

Meek is Senior Product Issues Manager at Oracle and owns Cranbury Tax Associates, according to his LinkedIn page.

The executive session lasted more than two hours, according to Norwalk Director of Communications Michelle Woods Matthews. It was preparation for the Court-ordered mediation session that occurred three days later. Neither side has commented on the outcome of that session.

Mayor Harry Rilling recently ruled real estate broker Jason Milligan out of order at a Council meeting, when Milligan said he could talk about the legal department while addressing the body because “Corporation Counsel” was on the agenda, though it was only there as a header, not a topic.

Council rules say public speakers can only speak to an agenda item and only for three minutes. That goes back to at least 2013.

Did former Mayor Richard Moccia ever rule a citizen out of order because they were attempting to speak at a Council meeting on a topic that wasn’t on the agenda?

“I have searched my memory. I do remember times when people spoke over the time limits not just by a few seconds, but by many minutes, I would state that they were finished and would have the next name on the sign in list called. They would usually leave at that point.

“There were some occasions when people tried to speak on non-items, but I do not ever remember the situation Harry faced where security was called.”

NancyOnNorwalk archives show other citizens have been ruled out of order, though NoN couldn’t find an article about it happening at a Council meeting.

In 2013, then-Oak Hills Park Authority Chairman Ernie DesRochers ruled park neighbor Paul Cantor out of order when he rose to read a statement, though no public comment was allowed.

In 2014, then-Public Works Committee Chairman David McCarthy (R-District E) ruled Mike Mushak out of order when Mushak spoke in a meeting, to correct what he said were untruths by then-Department of Public Works Director Hal Alvord. Mushak made his point in brief remarks and quickly left; security was not called.

Milligan told he can be removed

State law “allows for the removal of a person from a public agency meeting when that person interrupts the meeting so as to render orderly conduct of such meeting unfeasible,” Deputy Corporation Counsel Jeffry Spahr wrote to real estate broker Jason Milligan last week.

Milligan, as described above, was recently ruled out of order at a Council meeting. Three weeks later he sparred with Mayor Harry Rilling again, accusing Rilling of breaking the rules. Rilling tried to keep Milligan to three minutes; Milligan claimed he would have been within the allotted time if Rilling hadn’t interrupted him.

“The rules that the Common Council adopted apply to everyone and are designed to promote a culture of respect, which is critical for maintaining civility during civil discourse,” Spahr wrote to Milligan. “…Please be on notice that any attempts to disrupt Council meetings cannot be tolerated by either Mayor Rilling or the Common Council as they undermine the City’s efforts to promote civility and fairness and, most importantly, threaten the democratic process.”

Norwalk’s rules are not unique, Spahr said. “They originated from Mason’s Manual of Legislative Procedure, commonly referred to as Mason’s Manual, and have been adopted in most state legislatures nationwide.”

“I disagree with the mischaracterization that I am violating any rules.  To set the record straight, Mason’s Rules do not limit public participation to three minutes. The 3-minute rule is a Norwalk imposed exception to Mason’s rules,” Milligan replied.

NancyOnNorwalk asked Spahr about that. He wrote:

“Here are some excerpts from Mason’s Rules that stand for the general proposition that courtesy and respect must be the guideposts by which all discourse should be conducted. It is stated clearly in Sec. 120 that ‘(f)reedom of speech involves obedience to all the rules of debate’. Thus, these rules are not designed to stifle debate or impede freedom of speech. Rather, they are in place to encourage it and make sure that all are given a fair chance to express their views.

“Sec. 121(2) specifically directs that person may be directed to discontinue their speech. Note that Sec. 124 states that in a debate, ‘a member must confine remarks to the question before the house’. In this regard the Council’s Rules limit the public commentary to matters that are on the Agenda. If a person strays from this, the matter can be called to their attention. If they persist in speaking after this, they may be directed to discontinue.

“Similarly, the Council has adopted the house rule of limiting an address to 3 minutes. If the speaker goes beyond that, they can be instructed to discontinue.

“Finally, the FOI Act itself recognizes the right of a public body to have a disruptive person removed from the chambers.”

“There is no way that those were Jeff Spahr’s word. No chance,” Milligan wrote. “I am surprised he agreed to put his name on it.”

What caused that delay?

In a bit of drama you won’t see on YouTube, the Oct. 19 joint meeting of the Common Council and Norwalk Redevelopment Agency featured a half hour delay due to a technical problem.

Everything seemed fine as people spoke in person but when Attorney David Rubin, suffering from COVID, attempted to speak via Zoom no one could hear him. It became apparent that people participating by Zoom had audio issues.

Norwalk Director of Information Technology Joyce Liu and Assistant City Clerk/Legislative Assistant Jordan Schantz bent over equipment trying to fix the problem, while Norwalk Chief of Staff Laoise King said it might be a microphone problem. They were joined by Council member David Heuvelman (D-District A), who suspected conflicting settings in the Zoom call, specifically related to log ins.

So what was the issue?

The Norwalk government is wasting time & money. They are also trying to make this about something that it is not.

It is about a heavy handed unaccountable law department. That is what I want to talk about and what I have been trying to talk about. It is what started all of my problems between me and the city I love.

Mario has tried to bully and censor me. The bullying never worked. When the censorship ceased working (thanks to Bryan Meek) I was continuously interrupted.

I did not take the bait or play into their hand this time.

I attended the recent council meetings wearing a suit jacket. I spoke calmly and did not ever raise my voice. Pretending that security was or is required and sending me ridiculous letters is a strategy.

The law department has too much unchecked power. Mario is the leader of the law department. He has been in charge of all legal decisions regarding POKO for a decade. It is obvious that the legal strategy has been a mess. It should be questioned. Mario should have to justify and explain his strategy.

Mario authorized and signed a non disclosure agreement regarding POKO & the McClutchy’s. The last thing he wants is to be questioned or for there to be discussion & debate.

Mario has hid his POKO decisions for 10 years. He has mischaracterized the POKO legal issues with me for over 4 years.

Public discussion about POKO disputes would reveal both deception and incompetence.

They should be held accountable for both!

For the record, tax filing deadlines for extensions was midnight on 10/17. I don’t work for any of the campaigns this year, but did happen to catch the senate debate on my way back to work. Regardless of either, knowing what happens in executive sessions (no vote, no real say) and how things mysteriously leak from those, I intentionally decided to not be part of the process.

So, I don’t know what happened there and don’t really want to participate in this game of the city losing while thinking it has some scapegoat excuse for the continued losing. It doesn’t. The general public has no idea who Milligan is, nor do they care. They do, however, see a gaping hole in the heart of the city and a government full of excuses.

The whole thing reminds me of keeping Aaron Boone (Corporation Counsel) as manager and blaming the Astros (Milligan) cheating for all of its woes. How many more years is it going to take for Boone to deliver? Does it look like the Astros are going away by just crying foul? At the end of the day I just want the fans (the City) to win and the current strategy is clearly not working.