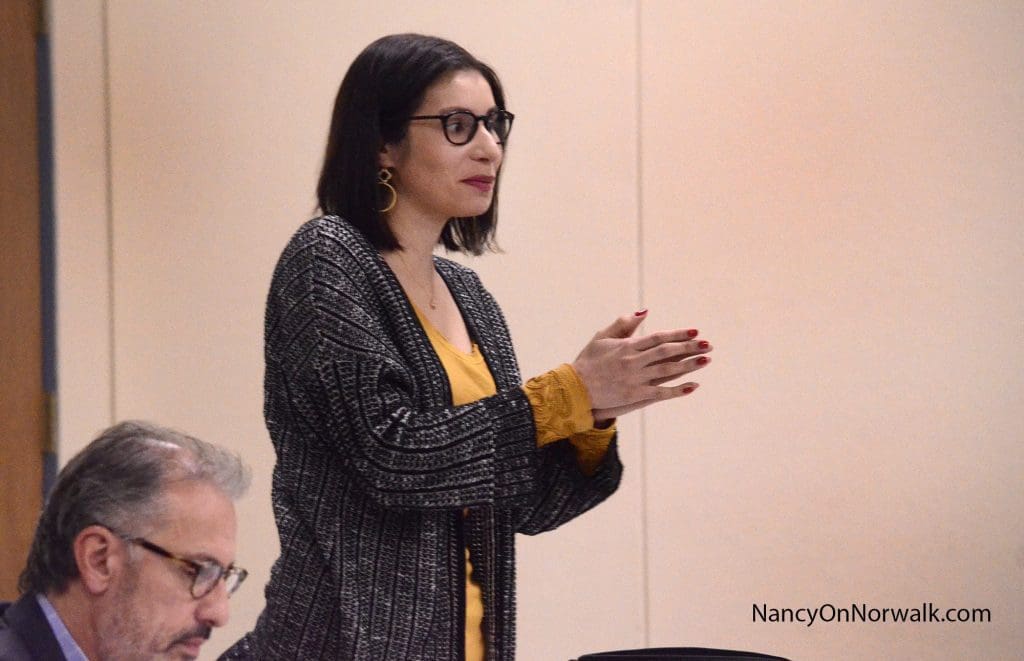 Melendez, currently DTC Vice Chair and formerly a Common Council member, would replace Ed Camacho, should she be elected Monday. Camacho has led the DTC since 2014 with resounding success, as Democrats now dominate City government. Democrats won 14 of 15 Council seats and all the Board of Education seats in the last two municipal elections.

“I want to build on the progress we’ve made,” Melendez said in a letter to DTC members. “Some may see the diversity of ideas within our party as a threat or as a weakness, but I believe it’s our biggest strength…. The job of DTC Chair is not one to be taken lightly. I am seeking your support with the full intention of doing the work required to continue advancing our party and our city into a position of prosperity, sustainability, and equity in the twenty-first century.”

Melendez was 19 when she was first elected to the Council in 2013. She served until last fall, after deciding not to run for reelection.

She said last summer that she wasn’t going away, that she planned to stay involved.

“As our Chair, I am committed to ensuring that our elected bodies reflect the rich diversity of our city and that we continue to elect qualified and committed Democrats to municipal, State and Federal office,” she wrote Tuesday to Democrats.

Jordan-Byron expressed interest in 2018 in being appointed to the Council to replace Faye Bowman. The seat went to Ernie Dumas.

“I have been a proud resident and Democrat of South Norwalk for 20 years, advocating, training and volunteering for progress.  Not only do I live in Norwalk, but I also work in Norwalk for a midsize international trade company in their Accounting Department,” she wrote to the DTC on Tuesday.

She said her education and professional development background includes:

No one else has announced interest. Melendez said she’s just “heard rumors.”

The Republican Town Committee will meet March 16 to elect its new slate of officers. Carl Dickens is running for Chairman; he said Tuesday that he is not aware of any other candidates.

It’s March, and the Board of Education has not yet voted on a new Chairperson. But Sarah LeMieux expects to continue.

LeMieux took the helm in December, after then-Chairman Bruce Kimmel resigned in the wake of what may have been the most raucous BoE meeting ever in City Hall. At the time, the Board voted to make LeMieux its leader for 90 days, and she said she didn’t think it’s fair to not let new Board members decide who the Chairperson would be.

“They have to vote on it again,” she said Tuesday, as she sat next to other BoE members. “But people have asked me to continue and I’m OK with continuing. I think we just have to have a procedural vote on it.”

The cost of insulin prescriptions would be capped at $50, the lowest cap in the country, under legislation under consideration by State legislators, a press release said Tuesday.

“According to the AARP, Americans with diabetes face insulin prices that average more than $5,000 per year,” Duff is quoted as saying. “The rising cost of medicines like insulin is an issue that patients across the country are facing and here in Connecticut we decided to make it a Senate Democratic Caucus priority for this legislative session. Patients should not have to struggle to afford their medications and by passing this bill, we hope to reduce the that burden on residents across Connecticut.”
The bill:

Diabetes is the seventh-leading cause of death in Connecticut yet the cost of insulin nearly tripled between 2002 and 2013, then doubled from that from 2012 to 2016, the press release states, citing the Health Care Cost Institute as the source of the information.

Regarding insulin costs — Everyone who reads the above should realize the actual price of insulin for CT is not dropping. The insurance companies are picking up the cost between sale price and cap. Hence, for those who don’t require insulin you (thru your increased insurance premiums) are picking up the cost. In summary, the drug companies are not reducing their prices. The pool of insured (us) are actually paying for it. I wish Booby Duff would be a little clearer with his language. On a side note, I got this info from Senator Matt Lesser from Middletown. Our local reps didn’t seem to have the time to respond to my questions. Glad to know the people of Middletown are well represented.

Maybe Sarah will actually be a real leader and finally put Mike Barbis on an actual committee! Or will she continue to waste everyone’s time and disregard the fact he was elected fairly by his district. Lord knows the BOE is desperate for his help!

John, the bill doesn’t hide the fact that this is a tax on insulin providers and you are correct, this will be added to my insurance premiums plus a hefty markup for the compliance costs and regulators the state will need to hire. So I’ll be covered for insulin and the chance i might get pregnant as well. What would we do without these geniuses?

You mean like the Dem council spending $70k on a crosswalk?

Regarding these two women potentially leading the Democratic Committee in Norwalk. I’m trying to research what they do professionally. Can anyone fill in the blanks??

Who does she support for President?

Norwalk Parent
Instead of saying this.
Dem council spending $70k on a crosswalk?
You could have said.
You mean like the past Republican BOE spending $287k on Adamowski?

Ron, you mean the salary for Dr. Adamowski approved by the Democratic-majority Board of Education?