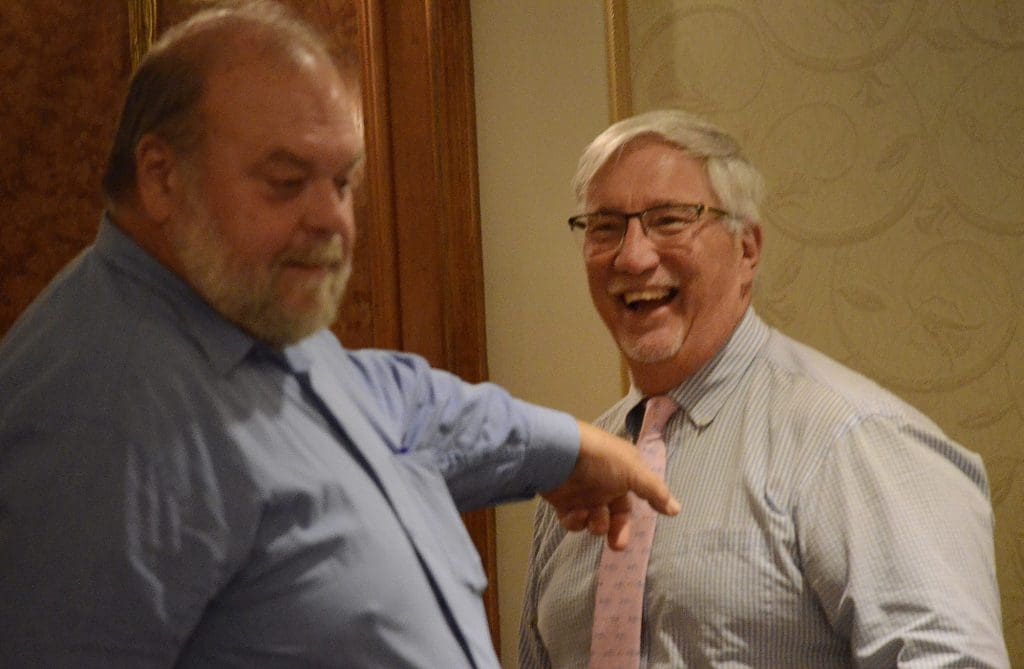 No permits for campaign headquarters?

“They don’t follow the rules!!!! The thing they complain I don’t do,” he wrote.

Milligan recently took much bad publicity for commencing demolition without a permit.

Planning and Zoning Director Steven Kleppin replied to an email asking about this by writing, “I checked with senior zoning staff and they can’t recall a permit being issued for a temporary campaign headquarters.”

“We don’t have a definition for temporary or ‘pop-up’ use.  Technically, we require tenant fit up permits for all new tenants to ensure there are no violations of the zoning regulations.

“However, senior staff, who have been with the department for several decades cannot recall ever issuing a permit for a temporary campaign headquarters for any political party.  Campaign headquarters would be viewed similar to an office use, which is permitted in many zones, including 43 North Main Street.

“Similarly, the seasonal selling of Christmas trees out of a church parking lot, often in a residential zone, has been considered a ‘traditionally an unregulated activity’.”

Rilling did not reply to an email asking about this.

“The rules that they hammer me for not always adhering to or agreeing with,” Milligan wrote. “I don’t think a permit should be required, but it is, and this mayor and administration has tried to shame me for not following.”

The Republican Town Committee has opened a campaign headquarters on Wall Street.

Jonathan Riddle announced Monday that he is seeking the Republican Party nomination for Congress in the Fourth Congressional District. Meaning, he wants to unseat U.S. Rep. Jim Himes (D-Greenwich).

“I am running for Congress because like you, I am fed up with the inaction and partisan politics of career politicians in Washington,” Riddle is quoted as saying. 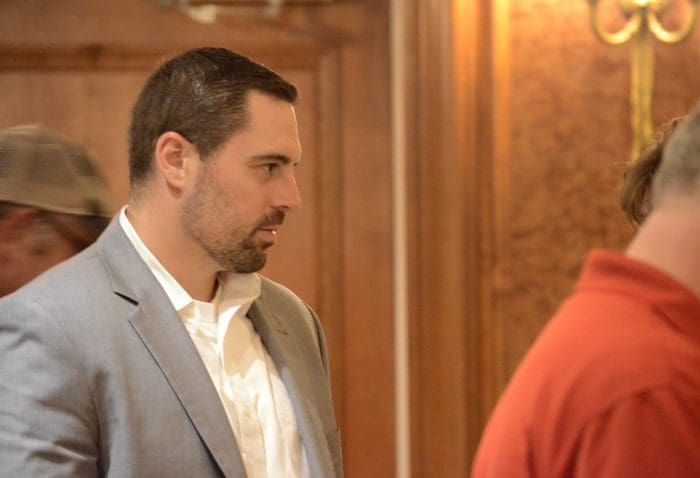 Jonathan Riddle, then a Council at large candidate, at the July 22 Republican Town Committee convention in the Norwalk Inn.

Riddle was endorsed to run for Norwalk Common Council this year but his name was withdrawn.  He grew up in Westchester County, New York, and was a three-sport athlete at Archbishop Stepinac High School, going on to play Division 1 football at Iona College in New Rochelle, his website states.

A degree in finance has led him to be Vice President and lead advisor for the Private Bank of Bank of America in Westport, it states.

“The Riddle For Congress campaign is fully operational and plans an aggressive fundraising push starting October 1st. Riddle has started meeting with key party leaders, activists, and donors; he has brought on Praetorian Strategy Group to oversee his campaign’s operations,” his press release said.

“During (Himes’) 10 years in Congress, Connecticut has lost jobs, taxes have skyrocketed, drug addiction has become a major crisis, and property values have plummeted,” Riddle says in a promotional video. “I am running for Congress because now more than ever, we need a Congressman who is committed to moving the ball down the field and actually accomplishing something for the people in our community.”

Veteran Republican political leaders Doug Hempstead and Mike Lyons, who are not running for reelection this year, are being honored Oct. 23 at the Maritime Aquarium.

Hempstead has nearly 30 years on the Common Council and Lyons has put in 22 years in a variety of positions, including the Board of Estimate and Taxation, and most recently, eight years on the Board of Education. Former State Rep. Larry Cafero will serve as master of ceremonies.

Tickets are $65 or $120 for a couple, and proceeds will go to the Norwalk Education Foundation.

“This is a non partisan event, being held at the Aquarium, which rightfully might not even be there if it wasn’t for some of the work done by these two public servants in the latter part of last century,” BoE member Bryan Meek wrote. “…As they are not running for office this year, some of us thought to give them a proper party for their decades of service to our community.”

Can we get an explanation why Mayor Rilling is so special that he doesn’t need a permit?

I will be the first volunteer to help overhaul the onerous permit process in Norwalk.

It is one of the things that makes Norwalk unfriendly to business except the largest (think big box) or well connected businesses.

It is not a good look when the mayor ignores the rules.

Can NON readers give examples of other times that the mayor ignores the rules?

Only the mathematically challenged could vote for Rilling. Norwalk is a financial disaster. Exploding infrastructure costs as a result of over building financed with tax credits that will never be recouped. The POKO project is a train wreck and will eventually add another $1MM to our school budget that will now be going up another 7% once we assimilate the 150 children of families of non-citizens thanks to the state’s foolhardy sanctuary city status. Add all of this to a bloated $350MM city budget and a botched re-Val. It’s no wonder why most folks want out. The property tax burden has suppressed property values and has slowed the turnover rate. This is likely the reason the numbers of homes being rented is at historic high which is changing the entire culture of the city. But cheer up folks, it’s going to get worse—especially if this old boy network gets re-elected.

A church doing a nonprofit fundraiser is your comparison. This is why most norwalkers don’t like you Jason.

I have no idea what you are talking about.

Don’t you live in Florida?

4 generations of my family lived in Norwalk. I lived in Norwalk for a decade of my adult life and I have always operated my business here since I started it nearly 20 years ago.

Cut it out Jason – you just seem petty.

I think the church analogy was made by Steve Kleppin.

I think honoring Hempstead is deserving.
But Lyons? He’s brought lawsuits to the city and has made a mockery of the city in his e-mails and social media use.

Milligan did a dangerous demolition without a permit, with workers who were most likely unlicensed, and flooded a business. First he tried his usual practice of blaming others for a mess that he himself created. Then he admitted publicly that he was trying to get away with something, and he shouldn’t have done what he did.

Now he tries to create a false equivalence between his selfish recklessness, and what every political campaign has done for decades?

I used to have some sympathy for Milligan, but with each passing day, it’s more apparent that he’s got lousy judgement and ethics that are questionable at best. I’m in agreement with the person who said his tactics look unbelievably petty.

How about Milligan tell us about the firm he used for his illegal demolition, and whether it was licensed, and why the work didn’t appear to be done to a standard that any licensed demo company would follow?

My permit sat with city hall for 2 months while they conveniently sat on it.

Team Harry pounced all over a legitimate accident that could have happened to anyone in this business.

When the shoe is on the other foot and our Mayor has the rare opportunity that he should file permit he ignores the rules.

I hate the rules and want change them.

Harry defends the rules but conveniently ignores them when they apply to him.

Amazing that people are okay with the top guy and former top cop just acting above the law.

Who decides which rules can be ignored?

And who can ignore them?

It was a “legitimate accident” that Jason Milligan hired a firm that doesn’t appear to be licensed?

Seems like a lot of accidents. Are we supposed to believe that both New Canaan and Norwalk were unfair to Milligan?

I see he has not addressed any of the questions about the illegal demolition. I wonder why.

What firm did it? Was it licensed? Why did the work not appear to be done to a standard that would be employed by any licensed company? Why doesn’t “Mr. Transparency” want to talk about it?

Although it is not clear why.

I have definitely made plenty of mistakes in my life. I am not afraid to try and fail.

Too bad you do not hold our government leader to a fraction of the standards you appear to hold private citizens to.

Sorry you are so bitter. Maybe you should get a puppy.

I’d be interested in hearing your answers to SH’s questions.

Nancy. Would you provide a final count of how many NAACP members attend the fundraiser for the NEF. Thank you.