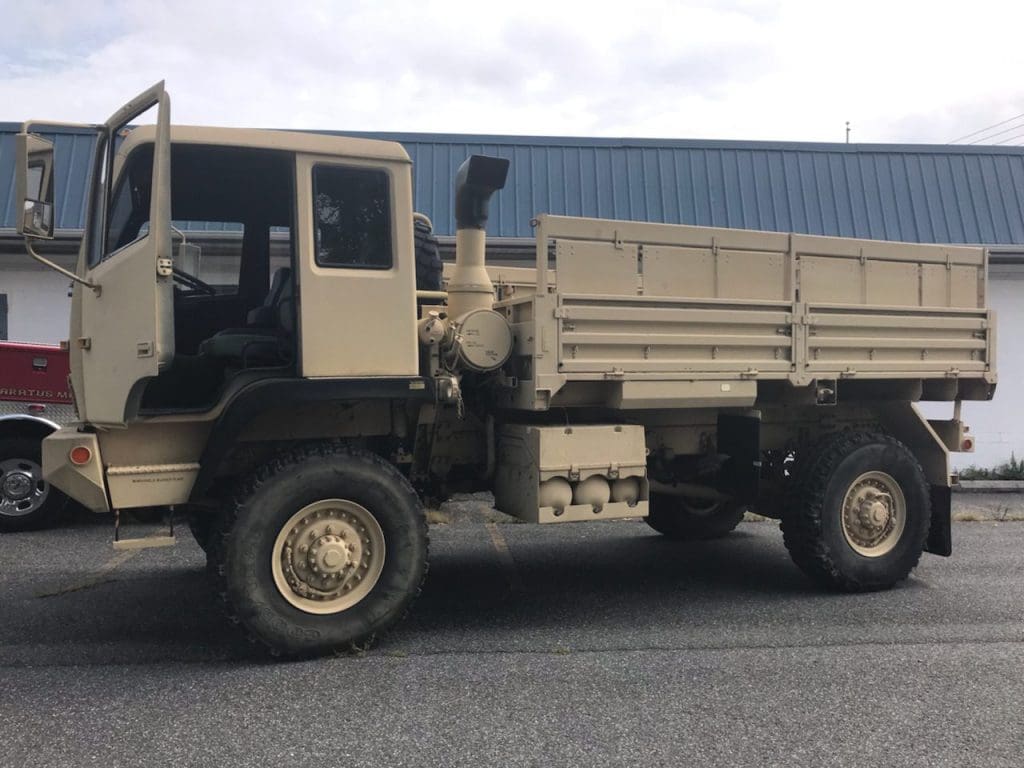 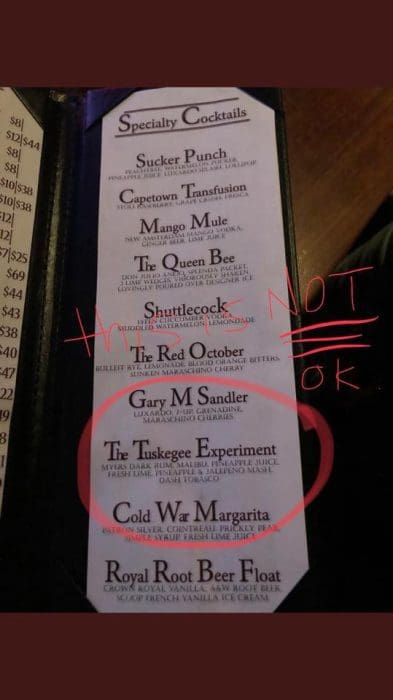 Hate has no home there?

“The Norwalk NAACP condemns 323 Main Restaurant for naming a drink after the ‘Tuskegee Experiment,’” Norwalk Branch NAACP President Brenda Penn-Williams wrote Tuesday in an email to the media.

Penn-Williams included a link to a Facebook page: Eric Arora had on Aug. 15 posted a photo of a bar menu from 323 Restaurant Bar, with the caption, “Um. This is ridiculously horrible.”

The “Specialty Cocktails” listed include the “Sucker Punch,” the “Capetown Transfusion,” “The Red October” and “The Tuskegee Experiment,” said to be made of Myers Dark Rum, Malibu, pineapple juice, fresh lime, pineapple and jalapeño mash and a dash of tabasco.

“Based on facts the Tuskegee syphilis experiment was an infamous, unethical, and malicious clinical study conducted between 1932 thru 1972 by the US Public Health Service which was mean and evil,” Penn-Williams wrote in her email. “To conduct such an experiment on rural uneducated African American men which was the leading cause of death is a travesty of injustice and a lack of human regard. It is a shame that 323 Main Restaurant continued with the same racist mindset in these times.”

Arora’s Facebook post has more than 600 comments, including one linking to an Aug. 16 article on Eater, announcing that the restaurant had removed the drink from its menu.

“It’s unclear why 323 in Westport named the drink after one of the most racist and shameful chapters of modern medical history,” Eater wrote.

Penn-Williams said Wednesday that she feels better knowing that the drink has been removed.

Her comment has gone nationwide, as Fox News posted a story about the awfully-named drink Wednesday, including her quote.

The restaurant has been open since at least 2014, when the first reviews were posted on Yelp; it’s taking a beating on Yelp now, as people from across the country have been posting angry comments.

“The next time Norwalk faces a severe storm or flooding situation, there will be a new resource to help evacuate residents,” Norwalk Deputy Director of Emergency Management Michele DeLuca wrote Wednesday in a press release.

“This large military vehicle has the ability to move in very high water conditions where most other vehicles would stall out.  The vehicle can transport people, either rescue victims or rescue workers, where they need to go during flood situations, such as the rescues performed during Sandy,” DeLuca said.

“The vehicle was part of the military surplus buying program instituted by the federal government.  This particular vehicle had only 1,800 original miles on it and unlike the much older NFD vehicle which has a double clutch, this has an automatic transmission. The vehicle originally sold for more than $140k, but the fire department was able to acquire the vehicle for approx $1,400.  The vehicle is currently painted in the desert tan that most military vehicles these days are painted in but, the fire department plans to have this one repainted and add a cover. Special thanks to Deputy Chiefs Ed Prescott and Steve Shay as well as mechanics Patrick Keough and Jason Lorusso for acquiring this asset for the Fire Department.”

The “Common Council forum, to discuss donating $15 million of our taxpayers’ money to property developers for the Innovation District was the last straw,” David Mapley wrote Tuesday, announcing an intention to “launch an initiative and get the whole of Norwalk behind me” and get the mill rate dropped to less than 2 percent within five years.

“I have worked hard all my life, and don’t want to spend retirement funding ne’er-do-wells and City cronyism,” Mapley wrote.

Norwalk officials would selectively award tax breaks to developers under the Innovation District plan, which aims to inspire development in the Wall Street area, create jobs, and support businesses. The tax breaks would be on the extra property tax arising from property improvements, and would not mean that Norwalk would be getting less tax from the properties than it did before they were developed.

The cap for tax incentives would be $15 million over five years. The Council Ordinance Committee allowed citizens to speak about the proposal Tuesday at its regularly scheduled meeting, after deciding to postpose its planned public hearing to Sept. 4.

Mapley has a Facebook Page, “Norwalk Taxes Too High,” which has 23 members.

“I pay 2.6% per year to City Hall in property tax – in 38.5 years I  have paid Norwalk my property value (assessed), which is disproportionately high compared to other First World countries (5x versus my second home in Switzerland where streets are clean, public  schooling is top notch, healthcare is so much cheaper and of higher quality, etc…),” Mapley wrote Tuesday.

“To give some perspective :-

“- very high salaries for police/teachers – investment banking levels… why do we need police to sit and watch utility workers working? Why is the Education Superintendent’s office adding headcount, with his amazing $254k salary??

“- why is Norwalk one of the very lowest recipients of ECS funds from Hartford for education?

“- why do City representatives think they can just award property developers $15m. of taxpayers’ money for the Innovation District? I am yet to meet a poor property developer, we should be incentivising companies and start-ups to come to Norwalk and grow our tax-base.

“- as stated above, I pay 5x in property tax what I pay for a second home in Switzerland. Sales tax there is 8%, income tax is lower, they just run their cities and towns professionally!!!

“Please support this initiative, and make your voice heard!! We have State Senator elections coming up in November,  stand up and discuss..”

Agree that Norwalk taxes are too high. The City of Norwalk does not provide a quality of life equal to the taxes paid. Taxes go up, property values go nowhere.

Obviously those {…} over at 323 are completely insensitive and beyond {…}.

all please sign up on Facebook to Norwalk Taxes Too High… I am also speaking with Bob Duff and Marc D’Amelio to make this a core issue of their position, certainly where Hartford and ECS under-allocation occurs..

with all respect David , Bob Duff needs to go his work in the State house has been terrible over the years. Bob likes to advertise his existence when the mail in ballots emerge from city hall , those who live outside of the city have no clue how he plays the city.

Bob likes grants they pay for things no one in the city understands the cost of, hands money to inexperienced people the city hires to do good for the city. About time for Darien to get a fist full of money with a marching band to the polls. No other time during his stints in Hartford does he bring home money we need.

He is a broker of sorts , finds the maximum amount of votes does a grant and wins them for life, Village creek is one example if he git money to fight the pollution of noise water and air on Meadow st that Dock rd house would be worth more as its on the market.

Yes that dock rd house gets the local skinny on rock crushers and pollution from Manressa daily so the new owners will know what the area is all about.

Bob is about market value that parking garage on wall is a prime example , because Jason has taken away the wind out of the sails within the Democratic party on Wall st and its success its a big negative for Bob and may be a plus for Marc. Maybe even for Harry there sin’t much ti be proud of this next election.

Why are taxes higher here in Norwalk compared to a wealthy town like New Canaan? Shouldn’t it be the other way around? Are we just dumb for living here instead of in a town like that?

“It’s unclear why 323 in Westport named the drink after one of the most racist and shameful chapters of modern medical history,” Eater wrote.

It is clear to me as to why. Just as it is clear to me why youth sports teams from this same community have been heard time and time again for years calling our community’s players “Ghetto Kids” on the playing fields, and getting away with it. It is called Ignorance, it is called Racism, and it is called Entitlement, and it needs to stop.

Congrats to the fire dept , something they can use, this should be a wave of new things for the firefighters including equipment they desperately need. The repair shop is astounding compared to other depts across the country.

Does Your Fire Apparatus Mechanic’s Have EVT Certification?

This is a large expense for the city a few years back there was talk doing work on other trucks for other departments is that still the case in Norwalk?

This mall and all the new building we will need more manpower and more trucks and equipment when can we see a full report whats on the road what needs replacing and life expectancy of whats in service and if there is a tanker on the way? Before election time we hope.

As we all know the health and safety commission in Norwalk is over their heads with just Washington Village and now Carlton Court and RC will be the next issues that will have to be dealt with’ its costing the city a lot of money not planning right, or listeniong to those that are trying to help.