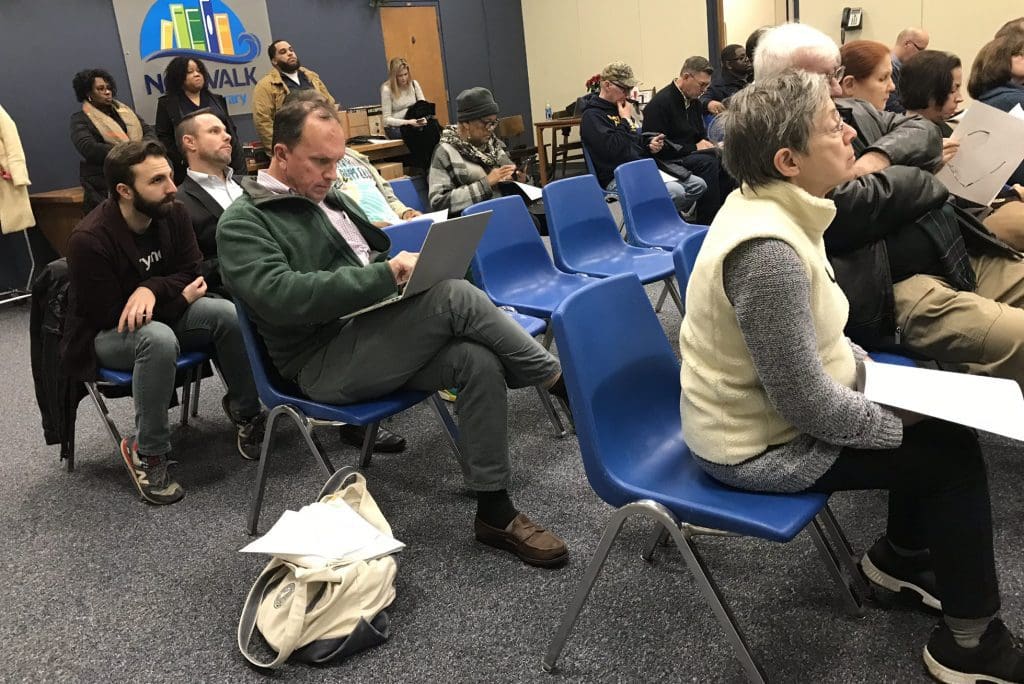 Norwalk’s long-awaited noise ordinance will likely be enacted into law during early 2020, according to Assistant Corporation Counsel Brian Candela.  Several lingering amendments ratified in Tuesday’s Common Council Ordinance Committee meeting will be sent to the Connecticut Department of Energy and Environmental Protection (DEEP) for approval, pending a Jan. 14 Council vote.

In recapping the comprehensive ordinance’s two-and-a-half-year revision process, Candela noted that Washington Street businesses were warned of noise consultant Eric Zwerling’s impending visits to their premises. Zwerling, he said, recommended the advance notice because “this way the businesses were on their best behavior.  While he (Zwerling) was down there, he was taking measurements and the businesses were complying with what he determined to be permissable sound levels.  It was his opinion that business was booming, and that it wasn’t as though the lack of noise was preventing people from enjoying themselves or going down there.”

“DEEP’s normal turnaround time has been about a month,” stated Candela in a post-meeting phone conversation with Nancy on Norwalk.  “Once the law is enacted, Mr. Zwerling will be brought back to give enforcement training.”

The Ordinance Committee also unanimously approved a Solar Power Tax Exemption, sending it to the full Council for a vote in January. It was explained that the exemption will derive from the difference in a home’s value before and after the solar system installation.  Property owners will receive the exemption by filing for it within 30 days of an assessment date.

Democratic Town Committee members Mike Barbis and Nora King have not responded to emails asking why they voted for Shirley Mosby to assume a vacancy on the Board of Education, over Colin Hosten, who won the spot.

The votes were noteworthy given the history involved here: neither have appeared to be fans of Mosby.

Barbis and Mosby served on the Board of Education together from 2013-2017, and Barbis routinely voted in opposition to Mosby. In one public incident, in July 2015, Barbis flashed anger as he called Mosby out for her face-making prior to the vote to appoint Stephen Adamowski as Norwalk Superintendent of Schools, which Mosby opposed.

“I think you have to remember there are nine people on this Board and to get something passed you need five votes,” Barbis said. “People can talk, people can reach across the aisle.  You can give that smirk, Shirley, and drop it from your face. But the fact is if you can’t get five votes it’s not going to pass. So do the math.”

“Who can be the best person here tonight, Mike?” Mosby said.

At the following meeting, Mosby requested that his “inappropriate behavior” be included in the minutes.

“I actually watched the video afterwards and I saw nothing,” Barbis replied. “Maybe you didn’t like what I said but that’s how it works.”

Mosby’s four-year term from 2013 to 2017 was marked by calls for her resignation. In 2014, Nora King was part of that chorus. In a 2017 comment on NancyOnNorwalk, King called Mosby unqualified to serve on the Board of Education.

Board of Education member Sherelle Harris served with Mosby and Barbis. Asked about the votes by Barbis and King, on Wednesday she wrote:

“A strategic game of chess has been played. Players switch sides.  Barbis’ Email, released anonymously six months after it was sent, has brought many brewing issues to the surface. Either they are so angry about what has taken place that they wanted to stick it to those they think orchestrated the process, or they are tired of it all and wanted to extend an olive branch.”

Harris was referring to the June 5 email that has prompted the NAACP (National Association for the Advancement of Colored People) to call for Barbis to resign from the Board of Education.

King was present as Monday’s DTC meeting began but left. Her vote was cast by a proxy. She has not answered an email asking why she left.

“This was an historic week as Democrats in the House of Representatives advanced several measures that directly serve the interests of the American people,” U.S. Rep. Jim Himes (D-Greenwich) said Thursday in a statement.

The statement followed the “House passage of the United States-Mexico-Canada Agreement, commonly known as USMCA, and the Restoring Tax Fairness for States and Localities Act, which would raise the cap on state and local tax (SALT) deductions that were instituted in the 2017 Tax bill, at the end of a week which also saw passage of a sweeping government-funding deal,” a press release said.

Himes has been aggressively front and center in the drive to impeach President Donald Trump. National news commenters have observed that Democrats need to highlight accomplishments that help American citizens.

“The funding packages we passed prevent a government shutdown and represent growth in priority areas for American families, especially here in Connecticut. The bill boosts our state economy by providing more than $12 billion of funding for maritime construction and investment, addressing the crumbling foundations crisis, and supporting workforce training and development programs in Connecticut.  It also secures $25 million for gun violence research at the CDC and NIH for the first time in more than 20 years, provides $21 million in funding to help clean up the Long Island Sound, invests in education, repeals the ‘Cadillac Tax’ on health insurance plans, and provides money for election security.

“Today, the House passed the USMCA, which I support because it’s good for the American (and Mexican and Canadian) people. It has brought together the most unlikely of allies in support of a truly modern and progressive trade agreement. The agreement, dramatically improved by Democrats, has strong protections for labor and the environment and will benefit the Connecticut economy. In Connecticut, 1,046 manufacturing firms, representing 27 percent of manufacturing firms, export to Canada and Mexico. This number includes 861 small- and medium-sized manufacturing firms and represents 8,821 manufacturing jobs which depend on North American trade.

“We also voted to raise the limit on SALT deductions, which were capped at $10,000 by the 2017 tax bill, disproportionately injuring Connecticut families. In 2015, 483,790 Connecticut tax filers claimed more than $10,000 in these SALT deductions and are adversely affected by this provision. The average SALT deduction in Fairfield County before the change was $33,400, meaning families who itemize deductions are on average being taxed twice on an additional $23,400 of income each year.  Connecticut officials estimated that the change in SALT deductions raised tax liabilities for Connecticut taxpayers by $2.8 billion. By eliminating the cap entirely for two years, we will put more money back into the hands of Connecticut workers, who already pay more than their fair share of federal taxes.  This bill will require action in the Senate before it heads to the President’s desk and becomes law.

“This has been a very productive year for the House of Representatives, which has passed more than 400 bills are now languishing on Senate Majority Mitch McConnell’s desk, and any partisan talking points that claim otherwise are detached from reality. In the new year, I will continue finding any way to move forward with a positive agenda for the benefit of Connecticut families and the American people. I urge the Senate and the President to do the same.”

A Norwalk man is seeking to run against Himes next fall as the Republican-endorsed candidate. Jonathon Riddle has recently issued press releases accusing Himes of “impeachment infatuation.”

“I have been thoroughly disgusted by the Democrats and in particular, Jim Himes relentless attack on a president duly elected by 63 million Americans.

“For the past three years they have moved from Russian Collusion to the Mueller Report, to Kavanagh, to the impeachment and at every turn have thrown away historical norms purely to undo the election of 2016 and to prevent President Trump from being re-elected in 2020.

“There are a litany of other issues that Himes is ignoring that are important to his district:  such as drug price reform, USMCA Trade Deal (which would bring jobs back to Connecticut), lower taxes, and reduced regulations to allow businesses to grow. That’s why I’m running: to get things done for our district.”

Riddle has served as a Vice President and lead advisor for the Private Bank of Bank of America in Westport for two years and lives in South Norwalk, the release said.

“Over the past 11 years in Connecticut we have seen the collapse of property values, sky rocketing tax increases, and lost businesses and jobs, under Jim Himes and the Democrat Party,” Riddle said in a Dec. 10 statement. “The Democrat Party is dividing an entire nation, by abusing their own power. Of the three branches of Government, the Legislative Branch is the most powerful. The abuse of their power started the day after the 2016 election, driving to impeach the President at every turn and trying undoing the election. Their hate for the President is so bluntly obvious, instead of focusing on the business of the people, they’re continuing down a path to nowhere.”

Jim Himes refuses to help fund our ELL programs in Norwalk, while spending $40k per year to send his daughter to private school in Greenwich…Just think about that for a minute.

Jim Himes’ party for years has targeted the rich for not paying his fair share and now he wants to give them a tax break by adjusting SALT limitations. The standard deduction was doubled to $24,000 for married filers.

Let’s not forget along with the increase in standard deduction, people in the above income categories, generally speaking, saw their marginal tax rates drop from 33% to 24%, or a $9000 savings on every $100k in income above $212,000.

Who exactly is Himes trying to help here?

Were Mosby and Harris former BOE members who accused the entire BOE of discrimination some years ago ?

i’d be very happy to get reinstitute the SALT and I think most in our State would-especially those in the top quintile. Himes loaths the 1%…that’s silly, he’s in the 1%. He’s an ex-Goldman-Sachs, who was an incredibly successful businessman. The highest marginal tax rate was 91%, during the Eisenhower Admin it was 70%, when JFK lowered it- it was to 50%…The current highest marginal tax rate is significantly lower than 50%. Current budget deficit is approximately $1trillion- in a growing economy–that’s with historically low unemployment rates–you’re supposed to have a surplus when that happens-not a deficit! In the late 1990s when unemployment rates were somewhat higher we had a surplus—Guess deficits don’t matter if it’s a Republican in the White House

Jim Himes is useless. How about issues like health care?

Shirley Mosby made accusations of racism. Sherelle Harris did not.

Glad to hear the representative thinks that excessive taxation is bad for the taxpayer.

J. Himes and his treacherous allies only desire to regain the House and take the Senate, hell or high water. No virtue, no love of country, no regard for the People, and I heard him trash the Constitution, the Framers, and the Founders of our country. He is a Manchurian Progressive Democrat. I don’t know who Jonathon Riddle is but I’ll vote for him.

Connecticut must join the movement or die.