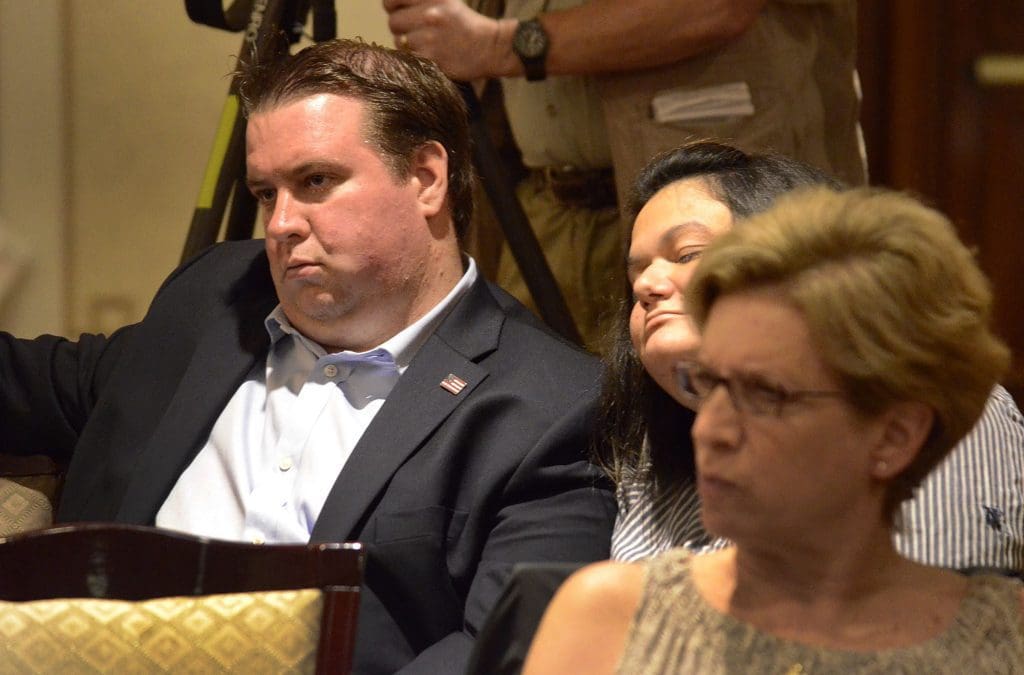 How much was that budget?  Hamilton ‘clarifies’ discrepancy

There’s a confusing mismatch in documents Norwalk Public Schools has presented to the public.

NPS Chief Financial Officer Thomas Hamilton said Monday that the $202 million figure is the “revised budget” for this school year. It includes the $1.4 million special appropriation authorized in December to expand English Language Learner (ELL) services in the wake of an unexpected influx of immigrants. But also, he said, he includes “the carryover funds from the prior year that were approved to be carried forward to the new fiscal year by the Board of Estimate and Taxation.”

Last year was unusual: ordinarily, NPS does a budget reconciliation in the summer and then has to get City approval to keep any budget surplus that may have developed. But last year’s deal had an expected $1.9 million surplus factored into what was said to be a $200 million budget.

So, doesn’t a budget reflect expected expenditures, not the source of the revenue?

“Carryover funds are moved from the old fiscal year to the new fiscal year, and represent an adjustment to the new year budget.  Therefore, the adjusted Board of Education budget for the current fiscal year (2019-20) is $202,204,108,” Hamilton wrote Monday.

Norwalk Chief Financial Officer Henry Dachowitz said Wednesday that the Norwalk Public Schools 2019-20 approved operating budget “was $198 million and this year, the Board of Ed is requesting $216 million.”

So while Adamowski is saying the budget request reflects a $14.3 million increase, Dachowitz has it pegged roughly at $18 million.

The ELL cost approved by the Council in November accounts for $1.4 million of that.

An $18 million increase would be a 9 percent jump, not the 7 percent increase that’s been talked about at BoE meetings.

“There are lots of discussions and hard work to do before a final budget is adopted,” Dachowitz wrote.

Christopher seeks to lead Norwalk Republicans ‘to the next level’

Jason Christopher, who ran last fall for Board of Education, is seeking to become Republican Town Committee Chairman.

Christopher and Carl Dickens, who also ran unsuccessfully for the public office last fall, are vying for the role. Current RTC Chairman Mark Suda is not seeking reelection; former RTC Chairman Victor Cavallo said he is not running and supports Dickens.

Christopher wrote, “I think the world of Carl. But I want an opportunity as well.”

In a letter to fellow District C members, Christopher said he’d like to “energize our GOP by taking our group to the next level.”

Norwalk Republicans have taken a beating in the last two municipal elections, gaining only one Council seat and no Board of Education seats. Their District 142 State Representative incumbent, Fred Wilms, fell to a challenge from Democratic candidate Lucy Dathan in 2018.

“As a lifelong Republican and Norwalker, I see a great need to lead locally into a movement of the people,” Christopher wrote. “If elected chairman I would work to bring fresh energy to our party and most importantly focus on community outreach in order to diversify the conversation in Norwalk politics. I strongly believe that we MUST build bridges, not burn them.”

He continued, “I want to be a positive force focusing on working to ensure we have a balanced and positive government. Looking at all sides and understanding them, not simply criticizing them. We must be effective and look to find solutions within the people we choose to place forth on our party’s ticket.”

He would “drive a large focus on campaign operations, research, the media, fundraising, social networking tools and legal requirements” and “ensure that everyone elected to a district plays a supportive role in some capacity.”

“After running for office this past election, I saw a lack of enthusiasm and unity,” he wrote. “If elected into this very important role, I would dedicate myself as chairman to fix this. I’m not afraid to admit the great need for our local party government to restructure and change. If we want to succeed and be instrumental within the party, we must work to dedicate ourselves to those willing to serve. I believe we must take steps to move with the times and recognize the needs of our city and its citizens.”

Dickens also sent a letter to Norwalk Republicans. His interest in the chairmanship does not “lie in being critical of anyone, or to blow everything up,” he wrote. “My interest is in moving the Norwalk RTC forward.”

“The chair position is a difficult one. It requires a tremendous amount of time and energy.  At this point in my life and career I have the time and thanks to God I have good health and the energy,” he said, referring members to his LinkedIn page and providing his contact information.

Speak to the Board of Ed after decisions are made

The Board of Education on Jan. 21 quietly unveiled a change: public speaking had been moved to the end of the meeting.

That’s after the Board votes on its agenda items.

This surprise comes two months after a raucous Board meeting, in which NAACP members and supporters berated Board member Mike Barbis for refusing to resign.

“We were trying to find a balance between the desire of the public to have a chance to be heard in a public forum, and the burden that structure sometimes places on NPS staff that have to stay there at the meeting to present on agenda items – it’s not a permanent decision, and we’re doing research to see how other districts manage public comment,” BoE Chairwoman Sarah LeMieux wrote Wednesday.

Norwalk Branch NAACP President Brenda Penn-Williams attended last week’s meeting along with four or five other NAACP members. She signed up to speak but when the end of the meeting came, she was gone.

Norwalk Federation of Teachers President Mary Yordon spoke, beginning her remarks by opining, “that doesn’t seem like an improvement to have public comments after all votes are taken.”

It’s possible to email Board members with opinions before a Board meeting.

The League of Women Voters of Norwalk annual Meet & Greet will focus on “redistricting and gerrymandering.”

“The program includes an interactive video demonstration of redistricting, followed by a panel of expert speakers on how Norwalk’s districts affect our representation and how ‘prison gerrymandering’ affects Norwalk,” a League press release said.

“With the 2020 Census coming up in March, everyone needs to be aware of the issues surrounding redistricting and gerrymandering,” the release said. “Come and bring your questions for the panelists. The event is free, and all are welcome. For more information, contact the League of Women Voters of Norwalk at [email protected]”

@BOE. Easy fix used by other districts – public comment ONLY on agenda items at beginning of meeting and additional period for public comment @ end of meeting – both with time limits on individual speakers. Doesn’t of course preclude folks emailing questions to BOE members.

Regarding the 9% Budget increase vs 7% Original:
I try not to be a conspiracy theorist because I think most of those people are freaking nuts. But when it comes to some of the things I’ve learned over the past few months just call me nuts.
The lack of transparency surrounding the current state of our schools is concerning. Our officials(including Teachers Union leadership) are either ignorant of what is going on in the classrooms or are acting in concert to mask the problems. For goodness sakes, let’s air it all out and move on. You can’t solve a problem if you don’t acknowledge you have one. We are behind the curve on funding and supporting our ELL program. That is by far Norwalk’s MOST pressing issue (NOT building a High School which is not needed) Until our administrators have a “Come to Jesus” moment (Am I allowed to say that in today’s politically secular culture) and until our STATE legislators bring some much needed financial support for these programs, Norwalk’s budgets are going to continue to blast thru what we think is the ceiling. Our decision makers don’t seem to know what we’re spending from year to year. Or, are the being publicly disingenuous? Call me nuts, but I think we need to get to the bottom of all this.

FYI NON, Jason Christopher ran for BOE, Not common council. Good luck to Jason and Carl. Both will do a great job!

18 million vs 14 million – pause anyone? This is another illustrative example underscoring how Norwalk’s spiraling school budgets are giving pause to potential home buyers, eroding market prices and fueling motivated sellers to exit. Yet it is business as usual with the ever larger budget increases at the BOE. Prudent fiscal management would mandate a full and complete transparency of proforma future year increases in school spending and the plan for how this will get funded. . . but of course this would never happen due to the revelation of a true fiscal crisis the city will endure in future years.

“unexpected influx of immigrants????
You can’t make this stuff up! Do these people ever step foot in any Norwalk school? More than half of students are Hispanic.
This has been going up and up and up and up each year!
“Unexpected”…LOL

One thing the BOE should do with public comments is have 2 sign up sheets to speak. One for residents and the other for Non Residents. The Residents would speak first at the beginning of the meeting and non-residents should there be time at the end of the meeting.

NINE PERCENT. When are the esteemed leaders in Washington going to realize we have an expensive issue here. The gang violence is out of control south of the border. A wall does not help the families of our new neighbors. I hope Senator’s McConnell & Inhofe thoroughly investigate the real social issues causing higher migrations and taxes because the GOP’s wall looks like an ineffective band aid. It would be nice to witness a new solution towards peace around the border.