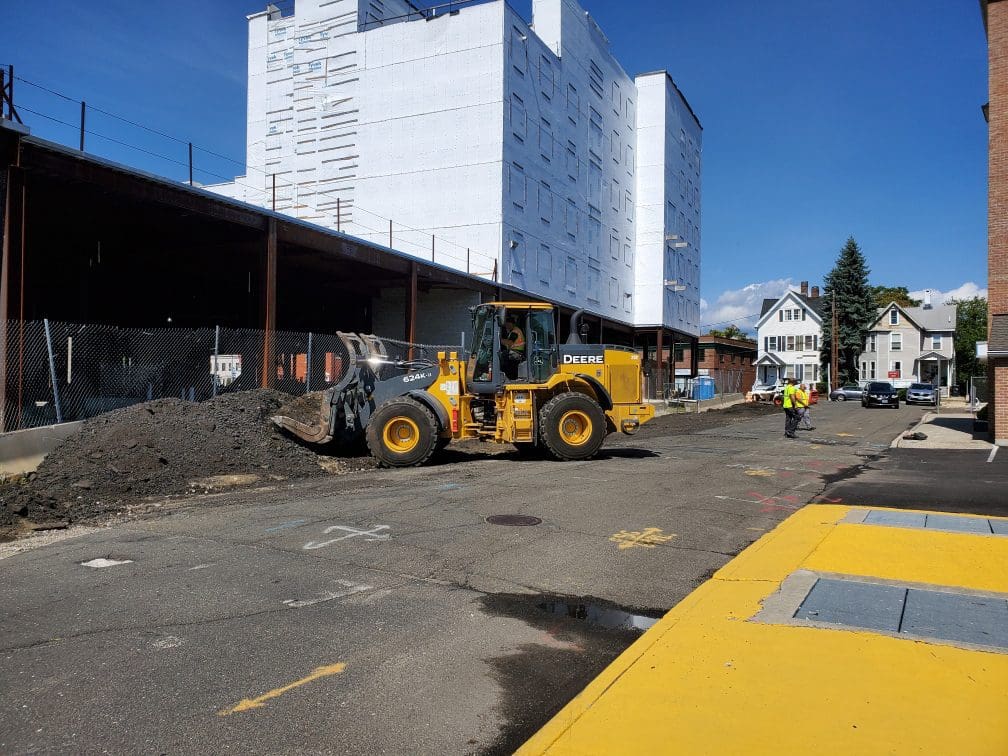 NORWALK, Conn. – Some Norwalk Center political notes for you:

The shift to a 100% affordable housing plan for Wall Street Place, colloquially referred to as “POKO,” ups the ante for Norwalk Public Schools in that it would produce 25-46 school children, Board of Education Chairman Mike Barbis said recently.

Barbis, at the July 23 Common Council meeting, said he had spoken to the Board’s consultant on new school issues and asked about the number of school children Wall Street Place would produce under the current plan for 100% affordable housing.

That’s a total of 25-46 students; if it were only 25 students the cost of educating them would be $437,000 a year, Barbis said. If it were 46 kids, the price would be $805,000 a year. Either way, it would far exceed the $195,000 a year that Todd McClutchy said the development would pay in property taxes for its first 15 years, a deal already baked into the Land Disposition Agreement (LDA) for the property, according to Corporation Counsel Mario Coppola.

“There are different formulas depending on if it’s market rate apartments or affordable or luxury,” Barbis said to the Council.

He promised on Aug. 15 to provide NancyOnNorwalk with an explanation, but then said Zuba was out of town. On Wednesday, after being prodded twice, Wilcox Williams issued this statement:

“Milone & McBroom did not have specific details on the project when they put out an estimated number of 12 students.

“The number of students will be higher if it is 100% affordable housing.  Initial estimates are 25-46 students, but Norwalk Public Schools would need to spend upwards of $1,500 to commission a study in order to get more definitive numbers.  There are no plans to do so at this time.”

Zuba did not reply to a Wednesday email from NancyOnNorwalk. Mayor Harry Rilling said Wednesday that he’s heard nothing from Zuba on this topic.

The company’s enrollment projections use formulas created in 2006 by Rutgers University. “It should be noted that these multipliers do not reflect recent demographic changes, nor do they take into account differences between urban, suburban and rural areas of the state and the idiosyncrasies of particular housing markets and populations,” the company states, explaining that its team compared the multipliers with recent comparable Norwalk developments.

The below chart explains the multipliers. The average multiplier is .4 for luxury apartments, .44 for market rate and .53 for affordable housing. 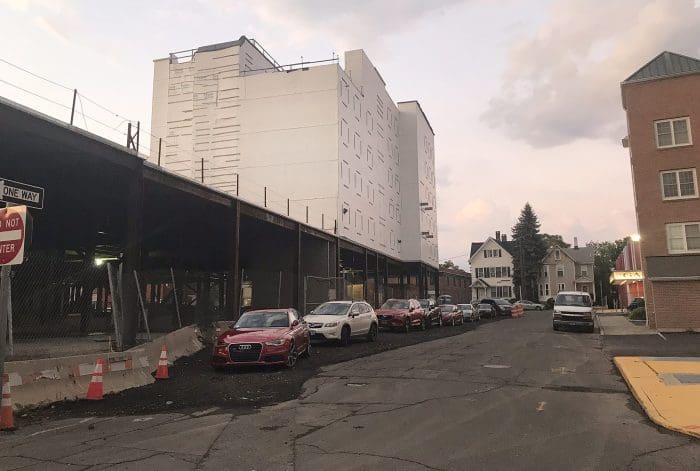 The Norwalk Department of Public Works turned out in force Tuesday to work on Isaac Street, according to real estate broker Jason Milligan.

“{B}usinesses have been asking for the jersey barriers to be moved back and this was a good time given all of the work happening in and around the Wall Street area over the next couple of weeks, such as milling and paving, striping for the new backed-in angle parking, and installing new multi-space parking meters. It also keeps open the possibility of future two-way traffic. Additionally, moving the barriers out of the city’s right of way makes Isaacs Street a bit wider, which will make it easier to plow this winter.”

Recent legal paperwork filed on behalf of Milligan, in opposition to the Norwalk Redevelopment Agency’s request that the Courts dismiss Milligan’s lawsuit challenging the validity of the new Wall Street-West Avenue Neighborhood Plan, offers an oddity.

Redevelopment’s motion to strike is “only meant to cause undue delay in this matter which ought to be expedited due the age and health of the plaintiff,” the brief filed by Attorney Candace Fay states.

Milligan appears to be quite fit and in his early-40s.

The case is filed under IJ Group, one of Milligan’s many LLCs. The City has spent legal time and energy trying to determine who the members are of another Milligan LLC, Wall Street Opportunity Fund, a move that Milligan fought tooth and nail.

Milligan said the line about “the age and health of the plaintiff” is just a mistake. A paralegal lifted the passage from another document and missed that line when she pasted it in, he said, pointing out that the motion also has two “conclusions.”

For the record, Milligan recently listed properties he said he owns in the Wall Street area. Using that list and doing further research, it appears Milligan owns:

Thank you Mike Barbis for bringing this up.

“Mayor Harry Rilling said Wednesday that he’s heard nothing from Zuba on this topic.” Then why doesn’t Rilling ask, get the study done? Frustrating–Rilling knows nothing unless it’s convenient, spoken by his Asst to the Mayor or a photo op.

The Wall Street area very much appreciates the improvements to Isaacs Street.

Hopefully we can put the cost on Citibank’s tab.

Nancy, thank you for the compliment. I feel “quite fit”

You missed several properties on your list including my office at 11 Belden.

Again, I ask, where will these POKO kids be educated? Hopefully they will all be placed at the same {closest) school and not be labeled as “99s” and bused to various schools all over Norwalk.

Kudos to Mr. Barbis for demanding the most accurate population data be tracked to be able to plan for these additional students and the budgetary impact POKO will bring to the school system. Planning done right. $805,000 a year needed for the schools to accommodate these projected children, while the wealthy McClutchys will get even wealthier on the deal, compliments of Norwalk taxpayers, by being rewarded a windfall with tax breaks that do not come close to offsetting this hefty expense to the schools. Our mayor’s apathetic response regarding the subject matter of accurate numbers is just stunning.

It might be good to see some verified data on any “estimates” on school kid numbers. Barbis also said recently that there was virtually unanimous agreement in his two districts about the new school calendar proposal. Yet, no data has been made public that verifies that. Did he poll 2 people or 200? Hopefully the board members will ask for real statistics from him.

People in Norwalk need to remember what’s being done and not being done by these politicians. BOE,NPD,Mayor,NHA. Doing as they like! Not working for the people of Norwalk. REMEMBER! When it’s time to vote!

Thank you Mike B. This is the point I’ve been trying to make- but no one in city hall or this city listens.

Bad business decisions made in city hall by one party rule are increasing taxes, depressing property values and driving too many taxpayers out of town.

POKO.
The entire idea should be tabled until all the issues are fully vetted.

A proper and thorough impact study is a must, there is a scientific approach to that.

Then we can see how this fits or does not fit into the vision of what we want for Norwalk.

Without such, we are at risk of being mislead by a smoke and mirror approach for the interest of developers and others.

“Milone & McBroom did not have specific details on the project when they put out an estimated number of 12 students” ???

I wouldn’t let them get away with that , the common council should not either.

Severe that relationship immediately and collect proposals/quotes/ check references from national level firms to do the study.

I would add to Patrick’s comments.

This “Hail Mary” proposal to salvage the unfortunate POKO project continues to fester.

Agreeing to convert that unfinished skeleton into housing units is a bad idea. Both short range and long range.

First, a six story building in that area is architecturally totally out of place, does not blend with the surrounding buildings, and forever changes the ambiance of the neighborhood.

Second, the structure having been “wrapped” for so long in hot wet summers, provided ideal conditions for black mold , very difficult to totally eliminate. Black mold is toxic.

Third, probably most important, families with children (set aside the question of what model is used to calculate an estimated number of children, families procreate), there aren’t any playgrounds, athletic fields or open spaces in that area. (the closest , a small plot at the end of Mott street.)

Children will aggregate in the streets evenings, or parking lots, hardly the ambiance for stimulating strolling pedestrian traffic.

Lastly, the proposed structure (per drawings shown at the public hearing) does not provide for first class street- scapes, being built to the property line. (circa 1940, not 2040)

Tear it down, start fresh.

This article makes me both so sad and angry.

How can this administration and common council be so laissez-faire with spending our tax dollars? How can they support this project and expedite it through without having a firm grip of the expenses it will inflict on local taxpayers, especially the largest one; schools?

This project is built on the back of taxpayers through federal, state, and local tax credits and abatements. It will also be “maintained” by taxpayers for the next 15 years as it generates less than $200K in property taxes and costs multiple times more in expenses (schools, infrastructure, DPW…).

In the private sector, this is gross-negligence, a firing offense, and it would be well deserved.

Thank you Mr. Barbis for having the moral fortitude to raise these issues. You have earned my respect and my vote!

Is there anyone involved with the POKO project who can provide the taxpayers of The City of Norwalk with an estimate of what this is going to end up costing us?

John Miller, yes they should be required to do more then just a guess-timate. The due diligence would produce more then just an estimate but doesn’t seem anyone will stand up and demand these answers. I will , council members have a fiduciary responsibility to every single taxpayer in Norwalk.

Nice reporting on the matter. Thank you Nancy.

Questioning, the support of the new school calendar in Barbis’ districts will be high because private schools have their spring breaks in March. A lot of families living in his districts pull their kids out of NPS after elementary school to send them to local private schools. Many who stay through middle school pull their kids for private and boarding schools for high school. When you have multiple kids of multiple ages, it’s difficult to take family vacations when one kid is off in March and another is off in Feb/April.

Adolph, you forgot to mention that the six story building that probably has black mold is also wood framed construction. It’s one thing to have young professionals and empty nesters living in there, but placing multiple families in a building like that is unconscionable, it is a disaster waiting to happen. The city can do better for our low income families.