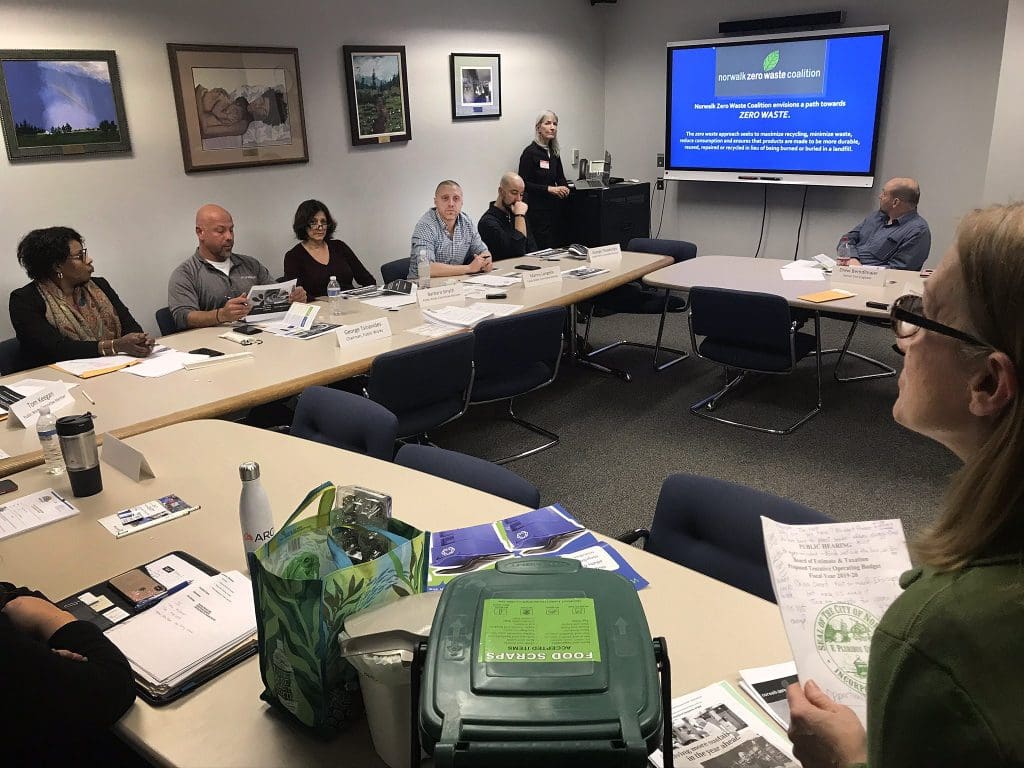 “It’s not true” that recycling is over, Diane Lauricella said to the Common Council Public Works Committee last week.

Lauricella, Diane Keefe, Mary Verel, Audrey Cozzarin, Mary Finnegan, Betty Ball and Louise Washer have formed the Norwalk Zero Waste coalition because “we envisioned a path toward zero waste,” she said. “… It approaches to maximize recycling as you see, minimizing and reducing consumption. It ensures that products are made to be more durable, reused, repaired or recycled.”

The legislature in 2014 set a goal for communities divert 60 percent of solid waste from disposal by 2024. Norwalk isn’t on track to hit the goal but with help might do better, Lauricella said.

“We just wanted to make sure that you know, that we can tweak the systems we currently have in place in order to get a better cleaner recycling rate,” she said.

Each member of the coalition represents a constituency, Lauricella explained, mentioning that Ball is from Skip the Plastic Norwalk, and Washer is from the Norwalk River Watershed Association.

Verel said she retired seven years ago after 18 years as a school guidance counselor, and since she’s left, recycling efforts have “sort of fallen by the wayside.”

“I agree with you hundred percent and you’re absolutely right. The BoE is the party to go to,” Public Works Committee Chairman George Tsiranides (D-District D) said.

“Everybody needs to work together on this. And when it’s been, it’s just every school for itself, which is I don’t think the best way,” Verel said. 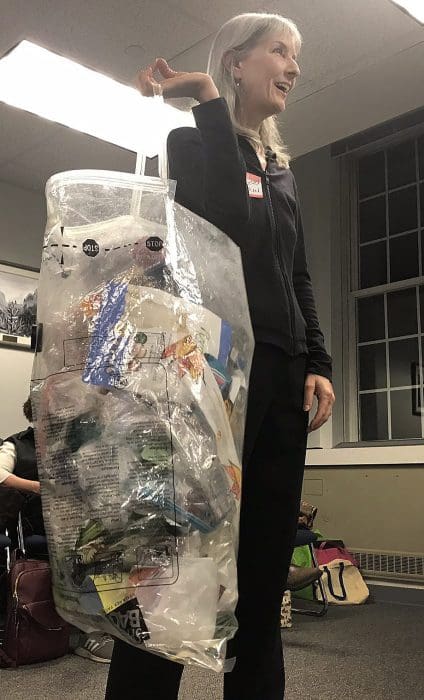 Audrey Cozzarin of the Norwalk Zero Waste Coalition shows off one month’s worth of plastic that she and her husband collected, in spite of trying to keep packaging to a minimum, Tuesday in City Hall.

“We don’t recycle food packaging plastic,” Cozzarin said, advising that rigid plastic, that can tear but not stretch, can be taken to REI.  “Basically it means talking to manufacturers and saying, stop producing all this plastic and then talking to the retail, stop selling this plastic. It’s like the whole it’s a huge issue. It’s not going to be solved just by us. It’s going to take like the village.”

The City recognizes the recycling issue and is working on different options, Tsiranides said.

Norwalk may be getting more education funding from the state than expected, according to an analysis done by the Connecticut School Finance Project.

The recommendation “is higher than adopted due to updated data being used in the formula,” Connecticut School Finance Project Executive Director and Founder Katie Roy said in an email.

Any changes need to be approved by the legislature.

The budget phased in the ECS changes over 10 years, so there’s an increase yearly for Norwalk.

“Now that CT is faithfully using an ECS formula, the ECS formula is re-calculated annually with updated data (updated resident student count, low-income student count, EL student count, median household income, equalized net grand list per capita and PIC score,” Roy explained Monday. “If the formula with the updated data says a town’s ECS grant should increase, the ECS grant amount is adjusted upward. Unfortunately, I can’t tell you which of the formula factors resulted in the increase because I am still waiting for a copy of the ECS shell (the spreadsheet with each town’s individual data broken down) from the state.”

State Senate Majority Leader Bob Duff (D-25) is running for reelection. “I’m all in,” he said in an email to Norwalk Democrats.

The State Elections Enforcement Commission (SEEC) website reveals a number of campaign filings beyond Duff’s Jan. 7 registration as a candidate.

Yes, State Rep. Lucy Dathan (D-142) is running for reelection, filing her registration on Jan. 9; Republican candidate Fred Wilms, who held the seat before Dathan, registered on Jan. 6 while Republican opponent Irina Comer got an early start, registering Comer for CT on Nov. 3.

Comer had raised $3,410 as of Jan. 10. She lists five $250 donations, from Attorney Miklos Koleszar of Norwalk, Lisa Henderson of Norwalk, Eugene Bewkes of Stamford, Christine Motta of Coventry and Julia Kudrjavtseva of Westport. She also lists $125 each from David and Alicai Larson of Pompano Beach, Fla. And, seven $100 donations from out of towners, plus $100 from Jacob Comer of Norwalk.

Also registering as candidates in January were State Reps. Travis Simms (D-140) and Chris Perone (D-137). No opponents have registered at this point.

State Rep. Gail Lavielle (R-143) has not registered as a candidate but Stephanie Thomas, a Democrat who challenged Lavielle last time around, has.

State Rep. Terri Wood (R-141) has not registered, according to the website.

Duff must raise $16,000 from 300 residents of his district to qualify for Citizen’s Election Program funding, a minimum $5 donation and maximum $270, by 5 p.m. July 17 for primary funding or Oct. 9 for a general election grant. However, if the application is made after Aug. 24, the grant will be reduced.

Duff announced Sunday that he has reached the threshold to qualify for the grant.

State Representative candidates must raise $5,300 from 150 residents of their districts, with the same minimums and maximums and same deadline. Dathan has reportedly qualified.

This story was copy edited late Monday to clarify the increase in school funding.

Norwalk’s getting a ‘bump’ in ECS funding….I’d call an additional $65,000 a mathematical ‘blip’.
That is an insult.

Regarding “additional” ECS funding by Lamont of $65k..That will help educate 4 ELL students. Now we just need to find funding for the other 2,100. Glad to see Bobby Duff is on the case.

Vote for tolls lose at the polls…..all of you.
Mr. Duff take heed.

@Nancy: Thank you. I’m curious, do you have costs per year on educating ELL students. My Math is $30 Million+. If it’s different please let us know. If you have a transparent net number that would be a helpful starting point. I can’t seem to drill down for an accurate “real” number.

For aluminum, does anyone know if it can be repurposed locally or domestically, or does it all go to Asia? I always wonder where soda cans go.

Yes, the ECS increase is still less than inflation, population and wage growth. This is the same slow bleed that has seen our grant funding dwindle to 5% of budget from 10% when Bob first went to Hartford almost 20 years ago. I guess it could be worse.