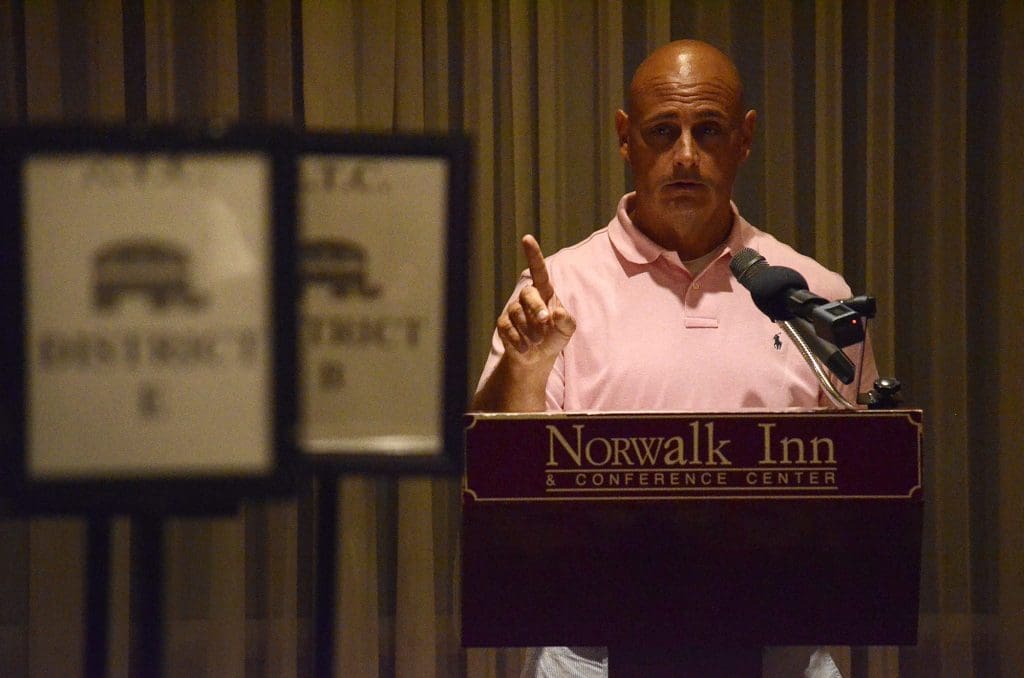 Norwalk Republicans have at least one alternative when it comes to who will lead the Republican Town Committee for the next two years.

Carl Dickens, who last fall unsuccessfully ran to represent District D on the Common Council, is seeking to lead the RTC Chairman. Mark Suda, who has held the post for two years, is not seeking reelection, Dickens said. The election is in March.

Suda did not reply to an email asking for comment.

Suda replaced Chairman Victor Cavallo, who took the helm in mid-2017 when then-Chairman Andy Conroy ran for Mayor. Republicans suffered a shellacking in that election, losing 14 of 15 Council seats and all the Board of Education slots, and watching as unaffiliated Mayoral candidate Lisa Brinton got more votes than Conroy – insult to injury as Democratic Mayor Harry Rilling cruised to a third term.

So Cavallo was swept away. In seeking the nomination, Suda said, “There’s no shame if I lose, there’s going to be a lot of greatness if I win.”

But the results were nearly identical: Republicans lost 14 of 15 Council seats and none of the Republican Board of Education candidates won. It’s arguable that Brinton, as an endorsed Republican candidate, did better than Conroy but she lost. Rilling had the same percentage of the vote he had in 2017 and the hoped-for coattails did not materialize.

Cavallo is not on the list of candidates endorsed to be Republican Town Committee members last week.

“I was not invited by the chair of District E to run for re-election to the RTC and I did not feel welcome to ask,” Cavallo explained in an email.

Even so, you don’t have to be a RTC member to be RTC Chairman.

“I will not attempt to regain leadership of the RTC,” Cavallo wrote. “To do so will require the support of the same cadre of RTC leaders who mounted the campaign to scapegoat me for the wave election losses of 2017.  Even after the 2019 wave losses under the current chair mirrored those during my term, I’ve heard no admission of regret or error that ousting me was the remedy to ensure election victories in 2018 and 2019.”

“As for other candidates have heard rumblings but nothing confirmed,” Dickens wrote.

“I will support {Dickens} in any way I can,” Cavallo said,

Todd Bryant, Marija Bryant’s widower, has put his name in, she said. Anyone else who’s interested can apply by Jan. 31 by emailing [email protected]

It’s a two-year, non-voting position. “However you attend the Board meetings and are often asked to express opinions on things,” Obuchowski said. “So I guess I can tell you it’s a great way to start, and learn what goes on in district, which the main thing is running the water company.”

Fairfield County’s Community Foundation has awarded Norwalk a $10,000 grant to help the city count as many people as possible in the 2020 census.

This is important because, “for every person we undercount, we lose $2,900” in federal funds, Lt. Gov. Susan Bysiewicz said at a recent press conference. The state gets nearly $11 billion from the federal government, money that is allocated according to data gathered in the census.

Connecticut began working on the Census in February, she said. Locally, the Norwalk Public Library is handing out bookmarks that advertise the census and plans to designate part of its computer area as being for the census, Library Director Christine Bradley said.

State Rep. Lucy Dathan (D-142) emphasized that children need to be counted; children under the age of 5 are most likely to be undercounted, according to Bysiewicz. That affects school issues.

You’ll get something in the mail in mid-March, asking you to go online and fill out census forms, according to Bysiewicz. If you don’t do that, then in April you’ll get the traditional paper form via mail. Then if you don’t fill out the form, Connecticut will send someone to knock on your door.

“If you don’t vote you can’t complain, same with census. If we can’t count you, don’t complain” about a lack of federal funding, State Senate Majority Leader Bob Duff (D-25) said.

Duff presented the Norwalk International Cultural Exchange (NICE) with a $5,000 grant from Vistra Energy on Wednesday, according to a press release.

“The Norwalk International Cultural Exchange is an organization that promotes and celebrates the diversity of citizens living in Norwalk,” Duff is quoted as saying. “The NICE Festival is one of many community programs that brings people together and encourages individuals to learn more about the traditions and customs of their neighbors. It’s a wonderful event and this generous grant from Vistra will ensure the program remains a vibrant part of the Norwalk community.”

Vistra Energy is an energy company focused on the competitive energy and power generation markets. NICE is a non-profit organization that seeks to promote and increase awareness of the diversity of people from around the world through arts and culture.

NICE is “extremely proud to be the recipient of this generous grant from Vistra,” Janet Evelyn, Executive Director of NICE, is quoted as saying. “In order for NICE to continue to provide this important and valued community building program we need the support of our business community. This grant from Vistra will go a long way in our efforts to engage and support the multiple varied traditional art forms that we showcase at the annual NICE Festival.”

She continued, “The NICE Festival Series was established to celebrate the rich global heritage and culture so evident in the music, food, art and diverse population of which we in Norwalk, Connecticut, are so proud. The program is coordinated by a group of volunteers in collaboration with the City of Norwalk Recreation and Parks Department and remains free to the public so all can attend.”

Mark has and will continue to do a great job for Norwalk and the Norwalk RTC.

@NoN – can you please ask Josh Morgan to precisely define “hard to count” communities? Could he explain in further detail what these “materials” are?

I thought Jason Christopher district C sent a letter to the RTC that he is interested in the RTC chair as well. NON is this correct?

Another week has come and gone and Harry Rilling hasn’t reported back to us on his phone calls with Jim Himes regarding support for our ELL programs. CT gets $ 11 billion from Feds and our school system is getting ZERO for the 20% of our students who can’t speak English. Not sure what Harry and Jimmy talk about, but I’m guessing it’s clamming and not education.

Hello, to all that are interested. While the article is correct that I am very much interested in becoming the next Chair of the RTC and have spoken with many leaders and members of the RTC about this position. I want to clarify one thing. I am not looking to unseat Mark Suda. Mark, revealed at the December RTC meeting he was not interested in seeking another term. After confirming with him that was the case for sure, I began connecting and making it known that I was interested in the position.
Carl

Thank you Mr. Dickens. I have amended the story.

As the current secretary for District E of the RTC in charge of all email communication on behalf of the district and its leadership, I take umbrage to Victor Cavallo’s comments. All current members of the district were sent numerous emails inviting them to a pre-caucus district meeting and open house for the purpose of preparing our slate as well as meeting potential new members. Victor never answered or expressed any interest in placing his name on our slate. He also did not attend the caucus. However, this does not change the fact that our selection process was transparent and welcoming to all who desired to participate, with no exception or special treatment.

The RTC is such a mess. They couldnt win a game of bingo let alone an election. Does it really matter who is in charge?

My advice to any future leader of the Norwalk Republican Town Committee:

Never lose sight of the fact that we are Republicans.

Adhere to our published Republican principles.

Compromising Republican principles has no place in your leadership.

Compromising Republican principles and pretending that we are democrats doesn’t win us elections.

Quitting under pressure from those weak of principles without fighting for Republican principles is cowardice.

If they force you to quit tell them to go to hell and keep on fighting to the end.

Mr. Cavallo,
Where can I find those published Republican principles? Are they national or local principles?

Thanks for the playbook Victor….Perhaps it can use a little updating.