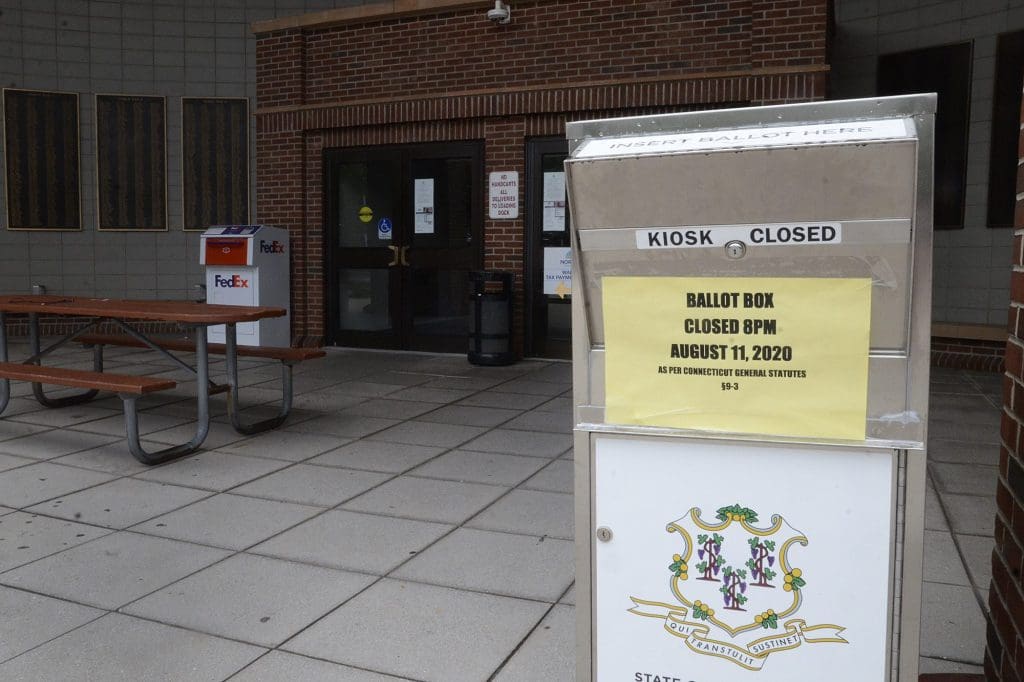 The absentee ballot box outside City Hall, on Thursday.

On Tuesday, the Common Council voted 13-1-0 not to increase retired Norwalk Police Officer Phil Roselle’s compensation, although his wife, Debbie Roselle, campaigned hard to get new legislation to make that possible.

Roselle retired after being shot in a training accident.

The vote followed a prepared statement from the Council. Mayor Harry Rilling released a statement Wednesday:

“The legislation is intended to make up the difference in a pension payment/workers compensation and base salary of an officer. My administration acted before this legislation was even contemplated to ensure Officer Roselle would be justly compensated for his decades of service to the NPD. Those payments total $500,000, and he also continues to receive his full pension of more than $60,000 annually (with yearly increases) and complete health benefits. We have done everything we can for Officer Roselle in a fair and equitable manner.

“Officer Roselle is not eligible for additional compensation for three reasons: 1) The legislation is not retroactive; 2) the settlement that has already been paid is in excess of what the legislation prescribes; and 3) Officer Roselle agreed to settlement terms waiving future compensation. Mrs. Roselle is a fierce advocate for her husband and fought hard to see this bill passed, however now asking for more money is simply unjust enrichment. Her continued attacks on the City are also unwarranted, as we have shown her family empathy and acted with compassion and professionalism throughout this process.”

Oops – the window closed at 3?

Except that when NancyOnNorwalk showed up at 3:30 p.m. Thursday (three days later) to get a look at the new courtesy, it was closed. Doors to City Hall were locked and there was no sign in the windows saying there was a customer service window.

Norwalk Communications Manager Josh Morgan said that evening that he wasn’t sure what happened. There’s been no further communication.

Rilling didn’t answer a Saturday email asking if the window closes at 3 or 4:30.

“It took some time to convert and build new space in City Hall and I felt it was important to create a user-friendly indoor area where residents can have their questions answered, drop off and pick up files, and speak directly with staff,” Rilling is quoted as saying in the Aug. 10 update. “Although City Hall is closed to the public, employees continue to carry out their responsibilities to serve Norwalk residents and businesses.”

The results from Tuesday’s primary are in: Joe Biden won the Norwalk Democratic nod for President and Donald Trump was chosen by Norwalk Republicans as their choice.

OK, it’s more interesting than that:

That’s all according to Norwalk Democratic Registrar Stuart Wells. The statistics show that 7.8 percent of Democratic Norwalk registered voters cast ballots in the primary and 6.9 percent of Republicans.

Statewide, 42 percent of the Republicans votes cast were done by absentee ballot, compared to 62 percent for Democrats, according to the Connecticut Mirror. And the Secretary of State offers these statewide results:

This story was corrected at 2:16 p.m. Monday to show Norwalk voting tallies as reported by Stuart Wells in a comment below. Information was added.

The Norwalk voting percentages in the article were the “at the polls” numbers. After counting the absentee ballots, which was finished on Thursday, the final percentages were:
DEMOCRATS
Biden: 88.08%
Sanders: 11.07%
Gabbard: 0.77%
Uncommitted: 1.27%
REPUBLICANS
Trump: 75.61%
de la Fuente: 9.55%
Uncommitted: 16.29%
These percentages are quite close to the state-wide vote.