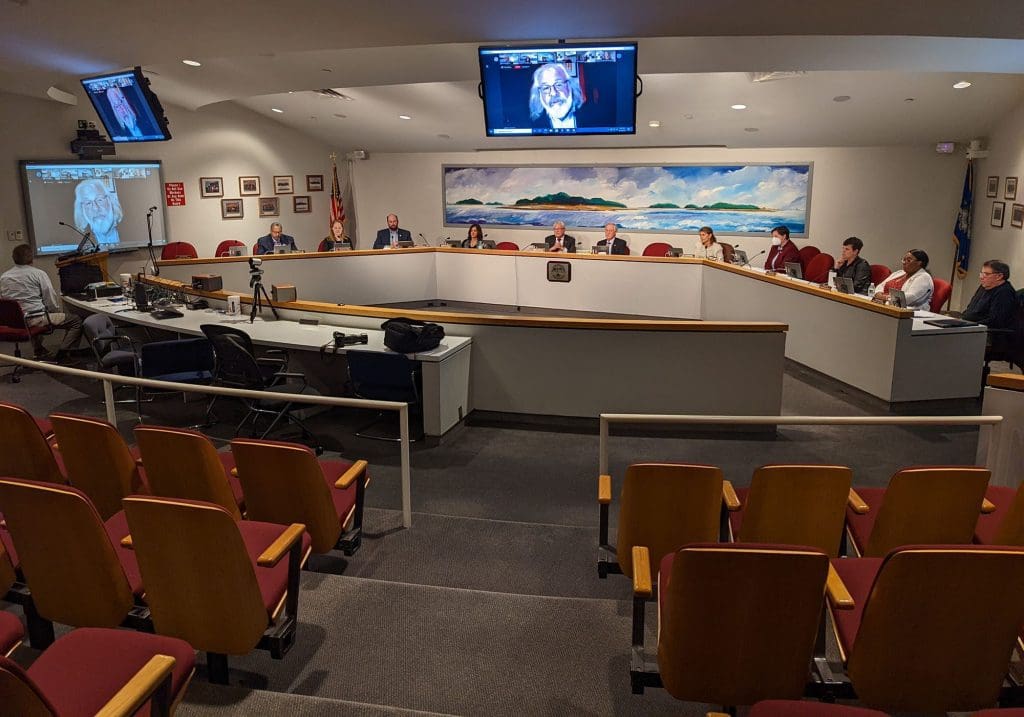 The Norwalk Common Council listens to Attorney Steven Mednick during its first in-person meeting since the pandemic began, April 13 in City Hall.

Mayor Harry Rilling left an important Republican Commission seat open for nearly seven months and then – zip – within minutes, Tony Lopez was in.

Lopez called Rilling at 3:15 p.m. Feb. 28 and volunteered to be on the Police Commission and the Traffic Authority. “I had him sworn in that minute,” Rilling said at last month’s Fire Commission meeting. At 4 p.m., Lopez was on the job,

“Lots of names are bandied about, at the end of the day it’s his decision,” Keegan said last week. “… It took a while for that right person to appear. And as soon as we were able to make the proposal of Tony Lopez, the Mayor went, ‘That’s the guy.’ Pretty simple. It’s no more complicated than that.”

Then-Republican State Central member Kelly Straniti left the Commission and Authority on Aug. 7 when she moved to Washington D.C. to pursue a career in Homeland Security.

In early February, Keegan who represents District D and plans to resign July 1, said he’d submitted many candidates to Rilling and “The Republican Party believes strongly that there be equal and balanced representation on such an important commission.”

There are three members on each body. Without Straniti, Rilling and Commissioner Fran Collier-Clemmons, both Democrats, had carried on as a two-member body.

“I don’t know what the hold up is,” said Republican Town Committee Chairman Fred Wilms.

Rilling said, “It’s important to select the right individual.” He had narrowed down the field to seven candidates who he thought were “better suited to the position. It was down to two, and “I will be selecting in the next few days.”

Rilling, on Feb. 28, said he had been alerted to Lopez as a possible Commissioner four days earlier. But that Tuesday was the first time they talked.

Last week, Keegan said, “Good for the mayor that he tried to get the right people.”

You think term limits for the Mayor or any other Norwalk elected official should be written into the charter? You’re out of luck.

There’s no legal foundation for term limits, Attorney Steven Mednick advised the Common Council recently.  To adopt local term limits there would need to be an express grant of authority in the General Statutes.

He compared the issue of “term limits” to that of “recall,” citing a mid-80s case, Simons v. Canty, which he said invalidated “recall” in Connecticut, except for a handful of communities that were granted such authority through a Special Act prior to the enactment of the Home Rule Act in the late 1950s.

Mednick expressed confidence that a court would follow the rule established by the State Supreme Court in the 1980s.

Mednick advises Charter Revision Commissions around the state. He said one Commission member recently told him of a Fairfield County town that has term limits, and he replied “Well, either they have a Special Act, because there are five towns in Connecticut that do have recall because they have Special Act recall, or they made a mistake.”

A “Special Act” is a law adopted by the General Assembly for a specific jurisdiction, Mednick explained to NancyOnNorwalk. “They are used very sparingly in the modern era; although they do get adopted form time-to-time.”

Mednick didn’t say what town he was referring to, but described it as “a little bit north of you and a little bit east of you.”

Bethany’s charter was revised in 2019. It states that neither the Mayor nor Council members can serve more than three consecutive four-year terms.

Mednick said he called a Charter Revision Commission member. “He’s a lawyer in Hartford, not a Home Rule lawyer. And he said, ‘All of the law was silent on that. So we thought we could do it.’”

But, “Silence is not authority, you need an Express Grant of Authority,” Mednick said. “So that town, little bit north of you and a little bit east of you, doesn’t have term limits. It’s on their books, but they don’t have it, and they couldn’t enforce it. If they went to court, they’d have a big (problem).”

About a year ago, then-Bristol Corporation Counsel Wyland Dale Clift said he agreed with Mednick’s opinion. Mednick also guided the Hamden Charter Revision Commission to give up on term limits, according to the New Haven Independent.

If you’re watching television and an ad for Gov. Ned Lamont comes on, you might notice a familiar name down in the right-hand corner of the screen.

Melendez was elected Connecticut Democratic Party treasurer in 2019, when she was still a Council member.

Asked about the Lamont campaign, she said, “I’m doing everything I can to help Democrats up and down the ballot.”

There are better ways to fix entrenched incumbency than term limits. Norwalk should create a system that allows many parties to be viable, instead of punishing people for voting for anyone but the two big ones.

And we need to move the elections to EVEN years, for the love of all that’s holy!

REAL political competition will keep the hacks out of power. Term limits just give you brand new hacks every so often.

Ah, Norwalk’s Police Commission. “It’s important to select the right individual” our Mayor reminds us. No doubt, right? But I also believe that it is appropriate to regularly question reigning assumptions. Maybe, just maybe, what our city really needs is the “wrong” person. That is, someone who might ask hard and even unwelcome questions. For example: why does the police union contract require that an officer selected for “random” drug or alcohol testing be given 24 hours notice prior to such “random” testing? Perhaps even someone who views “that’s the way it’s always been done” as an unacceptable answer to hard questions?

For anyone who has seen the excellent 2015 film Spotlight, it should be clear that bringing in an outsider to a responsible position in an organization can open the possibility for meaningful and important change, in part because an outsider is more likely to question reigning assumptions. (I am thinking of the Marty Baron character. If you haven’t seen this true story of how the Boston Globe uncovered a massive sandal, it is totally worth watching.)

Serving on city commissions, if done properly, is a lot of work. I know because I’ve done it. The individuals who are willing to serve effectively in those necessary and important roles deserve our appreciation and support. But our city will have a chance to improve its selection process. WHEN the city’s Charter gets revised, OF COURSE we should ensure that the Police Commission is expanded to at least five members, and it’s probably worthwhile to provide for the Common Council to appoint members without requiring the Mayor to nominate them first. Perhaps even make one or more of the Police Commission spots an elected position (as other Connecticut towns already do), so that this important city function (NPD is the 2nd largest city budget item) can enjoy even a fraction of the attention, and scrutiny, that our public schools regularly receive. Gentle reminder: under the current Charter every two years we elect seven “Constables”, two “Selectmen” and two “City Sherriffs”. Of course we can do better.

I know I probably speak for many folks in Norwalk when I say – just how wonderful it is to know that Harry can be mayor up until he drops dead.

Why they love him so much, there will probably be an effort to extend his time even after he’s no longer breathing. Our own version of “Weekend at Harry’s” – with his consiglieri and asst. mayor propping him up – and keeping the cool shades on. Based on the last few years, how would we even tell the difference?

Patrick tries to distract from the SUBSTANTIAL inadequacies of term limits by making jokes, but his jokes only reveal his petty obsession with one man, not the failures of our two party system.

If Patrick had his way, the DTC would simply replace Harry with a new “Harry” every 2-3 terms.

Term limits will NOT change the plain fact that Democrats outnumber Republicans in Norwalk, as well as the rest of Fairfield County.

Term limits will NOT change the fact that our outdated voting system throws our votes away if we vote for anyone besides the two parties.

Term limits will NOT change the fact that our elections are timed on off-years to minimize turnout, which gives special interests more power to keep electing their Harrys.

Term limits are a distraction and a lie. The REAL joke is that anyone is GULLIBLE enough to believe they’d solve ANYTHING.

Patrick, Harry’s cronies and all those corrupt developer buddies he keeps handing tax write-offs to are LAUGHING at you right now, because they’ve got you RIGHT where they want you. They know that term limits would hand them even MORE power to run roughshod over our city.

So go ahead and make your jokes. But don’t say no one told you so.

Harry is gone after Fed Money runs out and Revaluation happens. No chance he sticks around for the fireworks…He’d be a fool if he does. Harry is no fool

Given the substantial overlap in responsibilities between constables and sheriffs, wouldn’t it be more efficient to elect more sheriffs and do away with the constables? Or do constables get paid less?

Remember folks these are the same Democrats who hired their beloved Superintendent Estrella.

I knew Estrella was bad news from the start. Residents and school staff are taking notice. Dont think we dont see whats going on behind closed doors.

To understand her character you only need to see this older article where she was the main emcee for an event where a school official did an overly sexual drag queen dance on stage in front of everyone. Horrible.

Families at a Manhattan public school talent show got an unexpected lesson in human sexuality when a grown man took the stage in a black, sequined dress and flaming red wig and performed a raunchy drag number where he grinded the stage and spread his legs.”””””