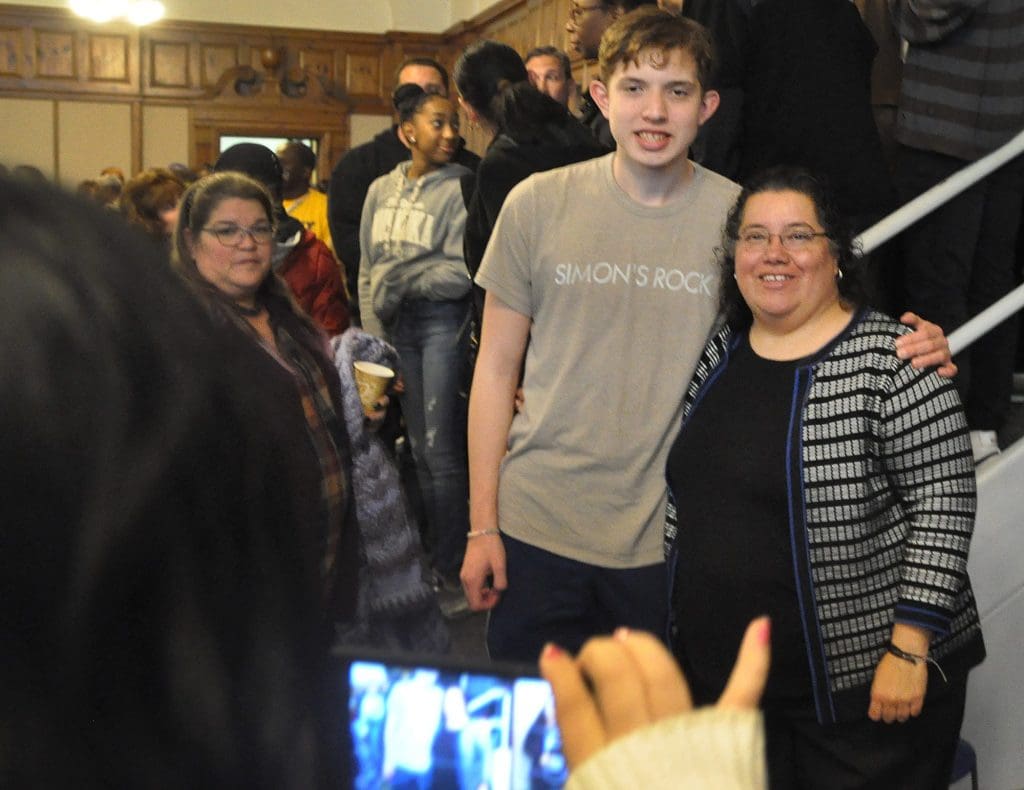 Norwalk Board of Education member Diana Carpio, right, shortly after being sworn in on Nov. 19, 2019. 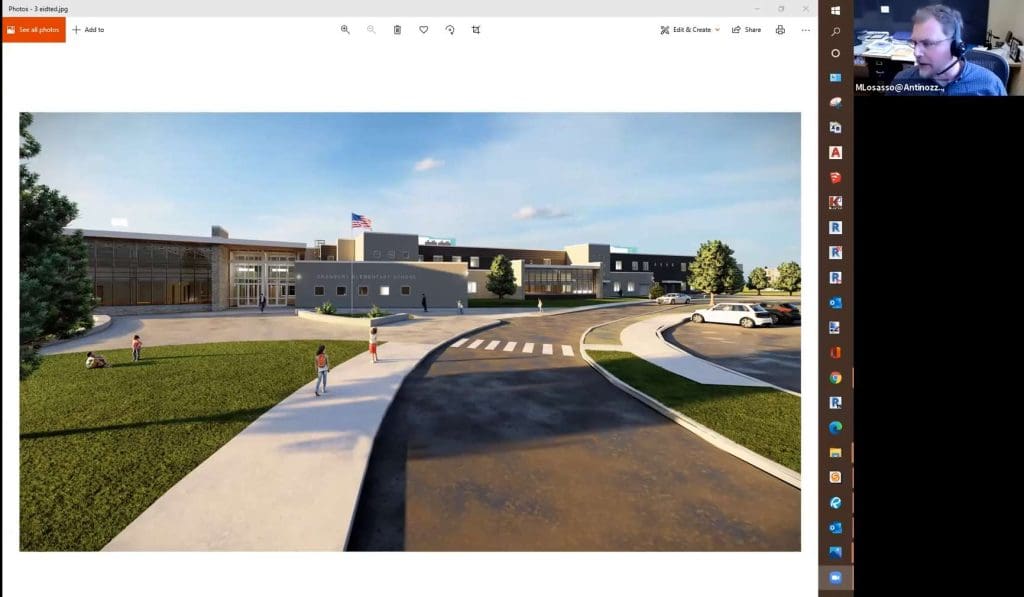 This is a view from the eastern side of the proposed new Cranbury Elementary School,
Michael LoSasso of Antinozzi Associates said in July. T

Construction to build Norwalk’s first entirely new school in decades is set to begin next month.

The Common Council on Tuesday approved a legal settlement with neighbors who objected to the plan for a new Cranbury Elementary School and then approved the contract with Newfield Construction Group to build the school.

The Common Council approved a $45 million capital budget expense for a new Cranbury Elementary School in 2020, but the contract approved Tuesday is for just under $40 million, with an additional $1.3 million possible in change orders.

“This is below the approved budget for the school and reflects the hard work of (Building and Facilities Manager) Alan Lo and his team to bring this project in within the budget and particularly in this current construction market,” said Land Use and Building Management Committee Chairman Thomas Livingston (D-District E).

Lo on Thursday said April 6 that inflation and supply chain issues were a big issue and “the project came in slightly higher than I estimated but we were able to maneuver – I’m not sure that’s the right word – but within the project contingency allowances to make this project work.”

“The new Cranbury School will be state of the art including all new classrooms, new furniture technology security, standalone gym,” Livingston said Tuesday. Children should move into the school in fall 2023 and the project should be complete the following June.

The school is planned to be adjacent to the existing Cranbury School. Neighbors, including Matt Forte and Matt Bury, objected to the school’s setback, two half-court basketball areas and other issues and filed an appeal although the City’s legal department announced a compromise before the Planning and Zoning Commission approved the project in January.

At that point, Norwalk Corporation Counsel Mario Coppola called the legal challenge a “friendly appeal” and predicted it would be settled soon.

The project is “the next step in the school’s a city’s ongoing school construction project,” Livingston said. An addition to Ponus Middle School was recently completed and renovations to Jefferson Elementary should be complete in June or July, according to Jim Giuliano of Construction Solutions Group, the city’s project manager for new school construction.

Carpio accused of ‘being friends’ with Estrella

Brenda Penn-Williams said Wednesday that she hopes to replace Board of Education Vice Chairwoman Diana Carpio by finding an alternative candidate before next year’s election cycle.

“I have received multiple phone calls from her constituents who voiced their concerns (about) ‘closeness to the superintendent.’ They say she’s at City Hall so much on the third floor that you’d think she worked there,” Penn-Williams said to District C Democrats. “We need someone in place who can be objective and represent the best for best and interest of the taxpayers.”

Penn-Williams, Democratic Town Committee District C Committee co-chairwoman, said, “I hope that I can find someone that’s going to support District C and the entire city instead of doing whatever the superintendent tells her to.”

Carpio denied the charges. “Everyone here knows for a fact that I have not voted every single time with the superintendent,” Carpio said.

She brought up Penn-Williams’ feelings about her goddaughter, Renita Crawford, being transferred from P-Tech (Pathways in Technology Early College High School), where she was a Curriculum and Instruction Site Director (CISD), to Brien McMahon High School, where she is a history teacher.

“I cannot get involved,” Carpio said, citing the confidential nature of the personnel issue and her need to be a nonpartisan BoE member, potentially voting on a grievance dispute.

Penn-Williams said she hadn’t brought that up and it wasn’t the issue. “I have received multiple calls.”

“I’m not friends,” Carpio said. “I am Vice Chair, and as vice chair, Colin, Godfrey and I spend a lot of time with her. But we are not friends.”

She said, “Every time you see me with her, outside of meetings, it’s for something. I am never with her out and about just to be out and about.”

She’s at school events and Estrella happens to be there, too, she said. She also denied being at Central Office. “The only time I’m there is the night of Board meetings.”

State Rep. Stephanie Thomas (D-143) said she had always found Carpio “to be pretty straightforward and open. And it’s possible she does not know that, you know, this is also her first elected role, which she may not know that people perceive it badly.”

Carpio was elected for a four-year term in 2019.

Penn-Williams said after the meeting that she is going forward with recruiting alternative candidates.

Another lawsuit against NPS settled

Donalda Chumney has settled the lawsuit she filed against Norwalk Public schools, according to the federal courts website.

Chumney alleged breach of contract and bad faith in her brief tenure here as NPS Chief Academic Officer. The complaint alleged that Chumney, labeled “damaged goods,” was forced to become a school principal in Virginia after departing NPS.

Chumney was enthusiastically recruited by Norwalk Superintendent of Schools Alexandra Estrella in 2020 only to have her position eliminated five months after taking the role, despite not being told of any performance deficiencies, according to the complaint.

The parties reached an agreement in principle on March 17 after an 8.5-hour settlement conference, according to the courts website. The case was administratively closed.

Lawyers representing Chumney did not respond to an email requesting details about the settlement. Neither did Deputy Corporation Counsel Jeffry Spahr nor NPS Labor Relations Attorney Barbara Namani.

NancyOnNorwalk filed a Freedom of Information request seeking settlement details 10 days ago. It was acknowledged but not yet fulfilled.

As previously reported, the lawsuit filed by Norwalk Association of School Administrators (NASA) President Lynne Moore has also been settled, according to the federal courts website. Attorney Ryan Daugherty, who represented Moore, said he had no comment.

Moore was removed from her post as West Rocks Middle School principal in 2018 under then-Norwalk Superintendent of Schools Steven Adamowski and transferred to Norwalk High School. The lawsuit alleged racial discrimination, age discrimination and retaliation. It was settled in January.

Moore has been appointed Tracey Elementary School principal and is slated to begin that role in June.

Brenda been Williams it’s probably just upset that she doesn’t have more power related to the Board of Education and she is the one making the situation with her goddaughter personal. Miss Carpio has been nothing but a hard-working member of the Board of Education fighting for all of Norwalk‘s children. She is not a politician but somebody that really cares. The complete opposite of Brenda . She is not only uneffective as a leader of the NAACP but she’s petty, straight out vulgar, and thirsty of power.

Regarding Lawsuits — The Public DEMANDS Transparency. WE would appreciate knowing how our hard earned money is being spent. It’s ridiculous to not know how much money is being spent, by what some might call incredibly poor management, at the Board of Ed. This is OUR money not THEIR money. I challenge some (any) elected official to step up to the plate and actually represent the feelings of their constituents. What are they afraid of? One can only wonder.

While the approval for a new Cranbury School has been long overdue it would be nice to understand what “legal settlement” and “compromises” were made to those neighbors who opposed the original plan since any of those may have ramifications to other concerned citizens in the area.

Lynne Moore was “appointed”- When did NPS stop including SGCs in the hiring process of principals?

Brenda Penn Williams once again demonstrates what a bully she is. Her and her family have demonstrated how to take advantage of the system and they refuse to admit that hard work brings success. Not using your bully pulpit to sue the city because you can’t do an honest days work. She was disruptive when she worked as a substitute teacher and upset kids and other staff members. The mayor has allowed her antics to constantly cause disruption in the city and her constant use of the race.and gender card provide a disservice for the female gender.

We love at Diana Carpio , and I speak of behind my community, she is not a politician, she is at hard worker mom , líder and she always fight for our kids at school !!
We don’t going to let her go !!

Why is it newsworthy whenever Brenda Penn-Williams, reknowned for controversy and inappropriate behavior, bullies elected officials to serve her own political agenda? I smell the usual, election season witch hunt. Pam Parkington, perennial spewer of rumors and misinformation about District C residents, can always be counted on to jump on the bandwagon. The bar is set low in District C for decent representation. Way to keep it classy, Ladies.

More than a few elected officials unabashedly declare friendships on social media or while out stumping or raising campaign donations for each other. One recently posted about being friends with our Senator while promoting his fundraising campaign, as just one of many examples. Why aren’t Penn-Williams or Parkington calling out if their friendships influence how issues or policies are voted on on behalf of constituents? Oh, that’s right! Because those people are their “friends”! Funny how that works. What’s good for the goose is good for the gander. How about the rampant nepotism on the NDTC, now more than ever out in the open after the recent primary, where members worked overtime blasting emails and robocalls (on the record) with deliberate misinformation about the alternate slate in order to keep their friends and family gaggle intact?

Consultants found immediately with their efficiency study that Norwalk is a city that functions more like a small town. That’s a nice way of saying that we’re townie, we’re crony, and we cannot get out of our own way. Small town shenanigans are on full display here, with the usual suspects stirring the pot. Not a good look when Pam Parkington’s “friend,” rookie career politician Stephanie Thomas, joins in on the gossip. Oh, the irony.

In response to Estrella’s numerous solicitations and the information Estrella had provided regarding the specific nature and duties of the Chief Academic Officer role, Chumney decided to formally apply for the position. During a Sept. 25, 2020, interview with a Board of Education hiring committee, members “asked her the very same questions that Estrella had texted her the evening before, verbatim with no amendments” the complaint stated. Minutes after it ended, Estrella called and told Chumney that it would be “essential” for her to relocate to Norwalk and it would be “critical to the Board.” (Ref: The Hour, Dec. 21, 2021; NoN Dec. 24, 2021). It seems that we have even more people who were hired from the NYC school system. Did Estrella also provide these people interview help prior to their being hired? Will interviewees who did not get jobs in NPS now sue over allegations of unfair help by the superintendent of the successful job candidates? The BOE and Common Council should investigate what seems to be a major lapse in ethics. It certainly isn’t a role model for students!

How many more lawsuits can Norwalk handle? And mostly because of the school system causing them?

Donalda Chumney how much money was she paid?

Where is the TRANSPARENCY? They would rather keep you distracted over how important it is to have transgender bathrooms… virtue signaling at its finest