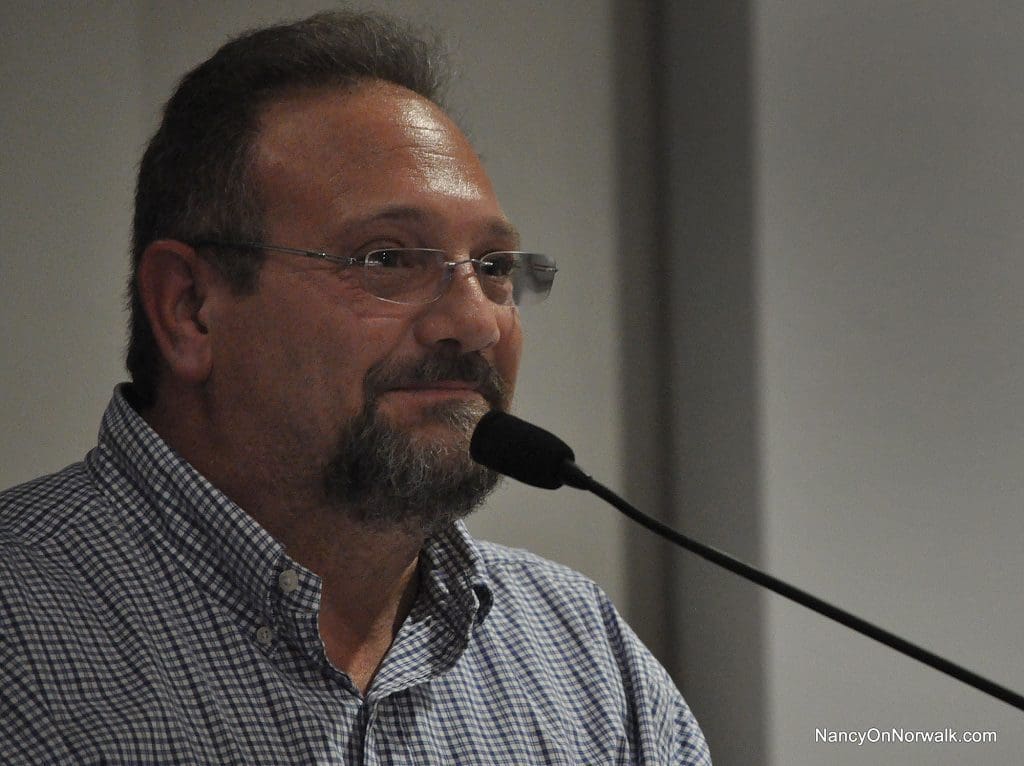 NORWALK, Conn. – Here’s what we have for you in political notes this Saturday:

“If I see it again in the paper I am going to shoot myself,” Recreation and Parks Department Director Mike Mocciae said recently, turning a rant about opponents of the Go Ape! treetop adventure to a diatribe about the Highland Games.

Mocciae was quoted in the daily paper last June as saying the Highland Games had been cancelled because it “did not get the request in on time.”

Mocciae on March 16 said he’s been hearing, “I kicked them out of the park, or I gave it to somebody else.”

“I was the president for five years, I wanted to see it succeed,” Mocciae said. “However, in its waning years, when whoever took over, they couldn’t make a go of it. They didn’t pay us so we booked a wedding.”

He said Recs and Parks sent letter after letter to the Highland Games last year asking if the event would be held in Cranbury Park. There was no response until someone called to say they weren’t able to pay, he said.

“So we booked it for a wedding. We made three times as much,” Mocciae said. “We didn’t book it for the White Gala that night. Now I find out a year later that the police are still owed $4,000 from the Highland Games. Yet I am the fall guy by some person who is misinformed that I booted this guy’s game.”

Norwalk Comptroller Frederic Gilden confirmed that. The outstanding amount owed by the Round Hill Highland Games to the Norwalk Police Department is $3,914, an unpaid 2014 bill.

Also in that rant was a comment about the current mood in city government.

Now, if he goes to the Board of Estimate and Taxation and says he overran the Calf Pasture Beach budget, the response is, “‘Oh Mike, you took in an extra $100,000 this year, not a problem, we know why,’” he said.

“That never happened before,” he said.

Department of Public Works Director Bruce Chimento remains confident that Norwalk’s sewage treatment plant can handle the influx when and if The SoNo Collection mall is built.

There are multiple Norwalk citizens who assert that Norwalk’s infrastructure is being overburdened by the sudden uptick in development. That includes Adolph Neaderlander, who brought it up again at the March 29 Charter Revision Commission public hearing.

Neaderland months ago said that he had heard that the wastewater treatment plant runs at an average 75 percent of its 18 million gallon capacity.

There’s still time to offer an amendment to the Connecticut’s Educational Cost Sharing (ECS) formula, Board of Education Chairman Mike Lyons said recently, in the kerfluffle resulting from the news that State Rep. Fred Wilms (R-142) has no bill submitted this year on ECS.

The next day, State Rep. Gail Lavielle (R-143) did not take advantage of an opportunity to propose an amendment.

“I did some additional checking into legislative procedure this morning, and it turns out it is NOT too late to get some legislative action this year. First, language can be entered into any bill at almost any time. It can also be done through an amendment on the House floor. You can get legislation passed in any way without a special bill for it. Also, the Education Committee usually passes 3 or 4 “dummy bills” that exist specifically for the purpose of being vehicles that accommodate language about anything related to education that can be introduced any time during the session. In fact, Fred or Bob could introduce an amendment on the House floor even later, and that would be like a bill, because people can actually sign onto it. So there’s still life here! Hopefully Fred will find an opportunity to propose such an amendment, Bob can then sign on to that, and we’re back in business!”

The Education Committee met March 18. Lavielle is a ranking member but said nothing about ECS.

Lavielle has been active on ECS in the past, according to Lyons, who in a March 17 said:

“Actually … we know the answer to that question already — ALL the Republican legislators from the surrounding communities voted in favor of Gail Lavielle’s bill a couple of years ago to reform the ECS formula to benefit Norwalk, while ALL the Democrats voted against it. Why wouldn’t the Republicans vote for it? Their towns get practically nothing from the State on ECS. The wealthier upstate towns I was referring to (like West Hartford), BTW, are represented by Democrats. Now THAT’s politics in action!”

NancyOnNorwalk asked Lyons what bill that was. Lyons, in a March 27 email to NancyOnNorwalk, said he wasn’t discussing bill numbers anymore.

“Trivial misunderstandings there have been mis-used by local politicians,” he said.

On March 29, 2013, Lavielle made a motion to amend the ECS formula that was being adopted by the Education Committee. Her amendment was voted down – in a voice vote.

There is no record of who voted for it or against it – or their parties.

There’s a sleeper in this year’s capital budget: a plan to reduce odor at the wastewater treatment plant.

“The 1990’s WWTP upgrade only provided provisions for liquid sludge hauling from the solids handling facility. Liquid hauling is very expensive (today) and not a viable option. OMI, at their cost, installed a belt filter press to dewater sludge and dispose of sludge cake which is more economical to haul and dispose. The other part of this is to evaluate odor control and ventilation to reduce odor nuisances and to protect existing electrical components from deteriorating from hydrogen sulfide gases.”

That would be reducing odor nuisances at a plant that former management said didn’t stink.

Former DPW Director Hal Alvord said there were no odors, that people were mistaking low tide smells for sewage smells.

Then-Public Works Committee Chairman David McCarthy said it didn’t smell anything, and challenged people to call him when they sniffed something that implied otherwise.

“Of course, they (treatment plants) all do,” Chimento said in November. “It would be silly to say they don’t smell.”

It’s the nature of the game, he said.

“Some may smell more than others because of the way they process things. Ours happens to be a biological system; it’s the sludge that creates the problem,” Chimento said. “The open tanks are not odoriferous.”

I want to correct your statement that “Fred Wilms (R-142) has no bill submitted this year on ECS.” I submitted an ECS bill request in January and in fact you posted that January letter request to the Education Committee. That was the required format for this short session year. Next year in the long session I can submit an individual ECS bill again (with a bill number) like I did last year.

As we all know, the Education Committee chose not to raise an ECS committee bill this year. However opportunities for amendment on the House floor may exist in the next few weeks.

What Rep. Wilms says here is all quite true. So is our statement in the Political Notes that Rep. Wilms has no bill submitted. As the representative states, he submitted a bill REQUEST that the Education Committee rejected. There is no bill. We do believe Rep. Wilms will submit a bill next year, and we hope the Education Committee will, unlike they did last year, allow the bill to go to the floor for an up or down vote so the entire Assembly can go on the record.

Thank you Mark. Much appreciated.

Last week I got an impromptu tour of the sewage treatment plant. (I had been exploring the east bank of the Norwalk River, curious about locations that Ct DOT might use as staging areas for the WALK Bridge project. But that’s another story.) So I found myself at the treatment plant, where a kindly technician called Doug showed me around and explained how the different stages worked.

“Pure as the driven snow” is not a phrase I would use to describe the ambient air quality. More like “trapped in a small car in winter driving Grandma to the airport.”

So what was I actually smelling? A little Googling turns up this information: All organic compounds (a/k/a number two) contain sulfur. Aerobic bacteria convert sulfur to a sulfate which is odorless. Anaerobic bacteria (bacteria that does not use oxygen to digest material) converts sulfur to sulfide. Sulfide, typically bound to hydrogen to form hydrogen sulfide gas, produces a rotten egg fart stink. There we have it (or most of it, anyway).

There are a number of solutions to deal with this effluent, from special enzymes to mechanical mixers that cover the surface of settling tanks with oxygenated water that blocks emission of sulfides by converting them to sulfates.

Grandma is not so amenable to such remedies. I would recommend Connecticut Limo.