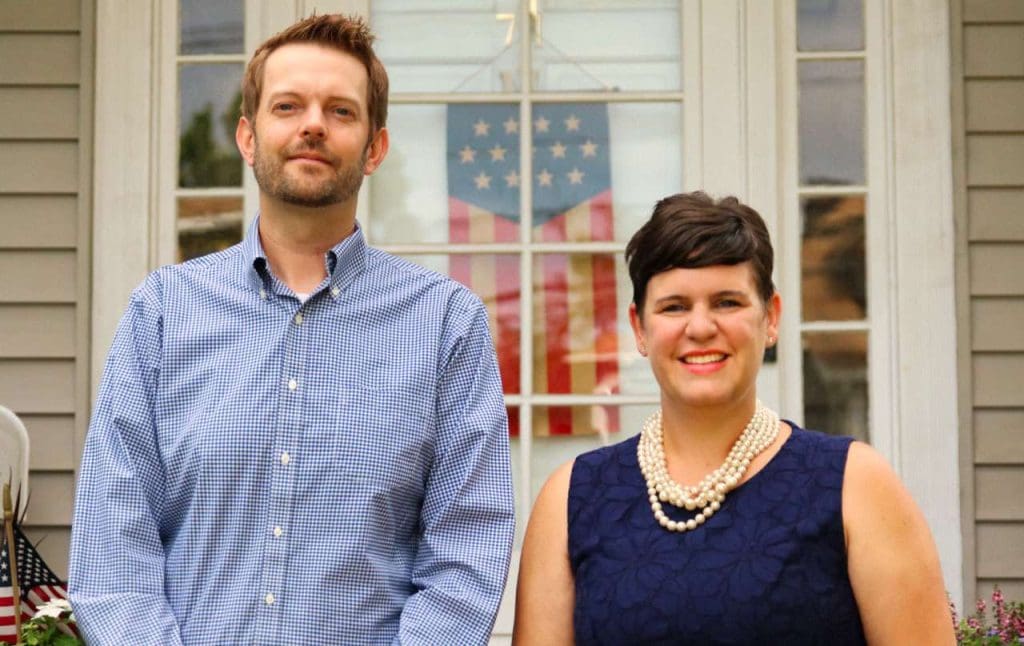 NORWALK, Conn. — Some political notes related to the election:

Tyler Fairbairn and Jenn McMurrer have teamed up in their drive to represent District C on the Common Council, running together after the Democratic Town Committee chose other candidates.

McMurrer said she and Fairbairn will seek to force a primary, trying to wrest the Democratic endorsements away from incumbent Council member John Kydes and newcomer Jenn McAllister, an Oak Hills Park Authority member.

“Together we hope to make positive changes as a team, bringing our community and neighbors together as one,” McMurrer said in a news release. “Really listening to what they want and need from our Common Council, and working for all of them.”

“Jenn and I have different backgrounds, but a shared vision for approaching service on the Council. If fortunate enough to be elected, we intend to highlight communication with residents of the district and a transparent decision making process,” Fairbairn added.

Their Monday news release said they’d be seeking the endorsement at that evening’s DTC meeting but Kydes and McAllister were unchallenged during the process.

Kydes and McAllister did not reply to an email asking for a response.

The alternative slate has already organized a “Cocktails with the Candidates” Saturday, July 31, from noon to 4 p.m. at 71 Gregory Blvd. Guests will be invited to sign petitions.

“We hope to host several of these smaller events over the next few months leading up to the election,” McMurrer said in the release. “It will give us face-to-face time with our community members and give us the chance to hear from them and take real action.”

“Speaking with friends and neighbors and hearing their support and thoughts for the future has been the best part of this process to date,” Fairbairn said. “We look forward to meeting more East Norwalk constituents as we continue our campaign.”

Their announced platform is:

Kydes has been on the Council since 2013, serving as majority leader, Council president and chairman of the Planning Committee, which oversees development plans throughout the city. His website lists these accomplishments:

McAllister holds a bachelor’s degree in business and worked for Camuto Group from 2007 to 2019, most recently as vice president for financial planning and analysis, according to her resume. Camuto Group was sold in 2018.

“Fairbairn is a father of three, has volunteered as a member of the Naramake School Governance Council, including as parent co-chair, he has coached Little League and serves as a member of the board. He has a background in urban planning and has worked as director/administrator of the federal Community Development Block Grant Program. He is currently the Vice President of the New England chapter of the National Community Development Association.”

“McMurrer is a mother of two, has served as the PTA President, a member of the School Governance Council, a member of PTOC, and a member of Norwalk SPEDPAC advocating for special needs children. She has over 20 years experience in communications and currently works as a communications consultant. She has volunteered for organizations including Lasagna Love, Big Brothers Big Sisters, Person-to-Person, and Earthplace Nature Center.”

McMurrer and Fairbairn could pick up their petitions Tuesday while Elsa Peterson Obuchowski and Jackie Lightfield would have to wait to Wednesday if they want to pursue an endorsement for First Taxing District Commissioner, Norwalk Democratic Registrar Stuart Wells said Tuesday.

That’s because the Democratic Town Committee endorsed candidates for District C Council but not for 1TD, he explained. It’s “a somewhat weird rule difference (which last came up 8 years ago when there were four Democratic candidates for Mayor, with no endorsement).

Obuchowski said she’d be obtaining petitions. Lightfield did not reply to an email asking about that.

The DTC vote for that office was a tie, with one abstention.

“One or both candidates must obtain petition signatures of 5% of the Democrats in the district in order to be the nominee of the Democratic Party,” Wells said. “If both do so, there will be a primary; if only one does so, that one becomes the party’s nominee. If neither does so, then there is no Democratic party nominee. There are a little over 3,000 enrolled Democrats in the First Taxing District, so the required number of signatures is a little over 150.”

Sarah LeMieux, whose four-year term on the Board of Education is nearing an end, is not running for reelection.

“I’m going for a Ph. D.,” LeMieux said Tuesday. “Norwalk is in good hands. And the next generation of people are very full of energy and new ideas, and they’ll really move things forward.”

The Ph. D. would be interdisciplinary – music and neuropsychology, she said Wednesday.

Another BoE member is not running for election; Suzanne Koroshetz joined the Board in March to replace Barbara Meyer-Mitchell, who resigned as the end of her four years came near.

Koroshetz did not reply to a Tuesday email asking for comment.

On Tuesday, Meyer-Mitchell said, “Service while raising children can be tricky, and I am grateful we have such a strong slate with so many women to represent us as we move forward into Norwalk’s future.” 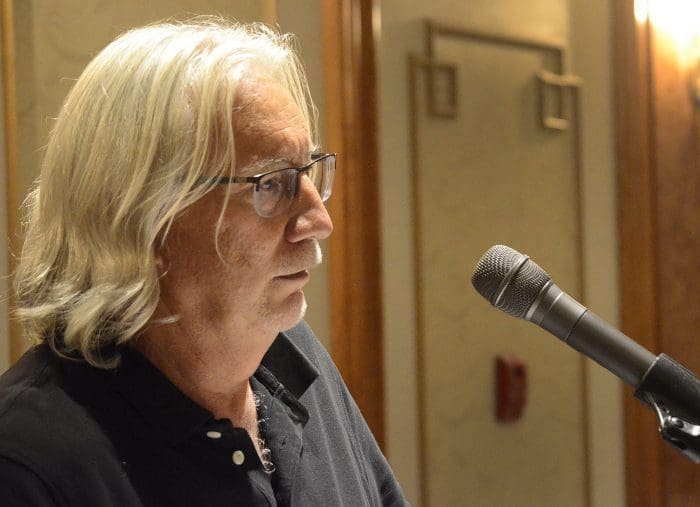 Town Clerk Rick McQuaid, a Republican, was once again given a Democratic endorsement Monday. He’s held the post since 2011 and never been challenged for reelection, as Democrats praise him along with Republicans.

McQuaid and his staff worked in City Hall through much of the pandemic, learning on the run how to do business better, former DTC Chairman Ed Camacho said.

“Rick was in the office, when a lot of people were at home,” Deputy Democratic Registrar Ron Banks said, adding that McQuaid allowed his staff to work remotely but, “he came in, just in case there was a need that needed to be met, he wanted to be in the office. He even got sick during that time and as soon as he recovered, he was back at the job.”

The high volume of absentee ballots was “a major, major, major challenge” to both the town clerk’s office and the registrars, and they worked creatively together, Banks said.

McQuaid managed to say some words from Anguilla, where he is vacationing.

“I have to just thank you, the Mayor and your whole party for the support and just everyone that’s always been supportive of me and my office. We’ve kept the politics out of it,” he said. 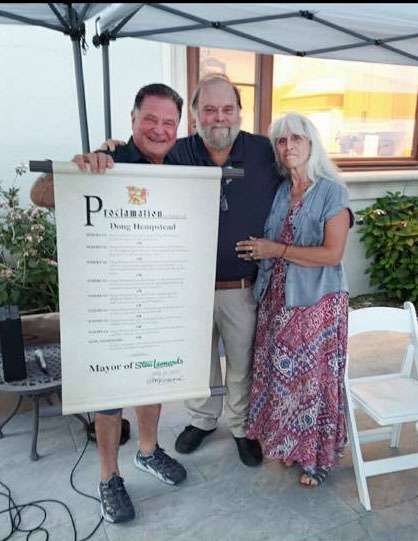 Doug Hempstead, a Republican who served nearly 30 years on the Common Council before deciding not to run for reelection two years ago, has retired from his post as Vice President at Stew Leonard’s.

“Thank you for every single thing you’ve done, for so many people, at Stew’s, and in the city of Norwalk. We’re just waiting for you to step up to employee,” McQuaid said.

“Maybe a couple of years. I’m not done yet,” Hempstead replied.

Asked afterwards by NancyOnNorwalk about his retirement, Hempstead said he’s “on to new adventures.” The first thing is traveling because “we’ve never been anywhere.”

But, “I am working the equivalent of a day a week till the end of the year,” he said. The Norwalk store is going to be renovated and Hempstead will help with that process, as he just shepherded a renovation at the Yonkers store, working through the pandemic. “No downtime for me.”

The Norwalk Stew’s will be painted, get new lighting and new cases, he said. “We may switch the bakery around a little,” there will be front end work and an addition is possible.

I think it would be cool if the singing vegetables did some rapping, kwis?

Great Jobs Dems! You have ENDORSED CANDIDATES!! But are still going to cost the City $35-40K with a primary?!? Really?! I guess it’s a great thing since the City is just flushed with cash and our schools are all FULLY funded! Sorry John thought your party had it together. Guess Not!

It’s interesting to hear a candidate say “Together we hope to make positive changes as a team” and then go against the “team” endorsements.

A crack in the democrat armor may allow Republican Read Auerbach or an Independent a seat at the council table.

I found this comment from a NYC mayor candidate reflects what I think is up with Norwalk Politics.

“…This Campaign for NYC Mayor was an incredible learning curve. And I’m a fast but prophetic learner. The financial and institutional corruption… The lies, backstabbing and betrayal. The scammers who come onto your campaign to steal and sabotage. The friends and supporters who waver and those who stand strong and stay the course… I’ve learned a priceless lesson.

WHILE I CONTEMPLATE WHETHER TO RUN FOR NY GOVERNOR IN 2022, I Stand comfortable that I now have one of the the best teams a campaign can have…” IsaccWrightJr