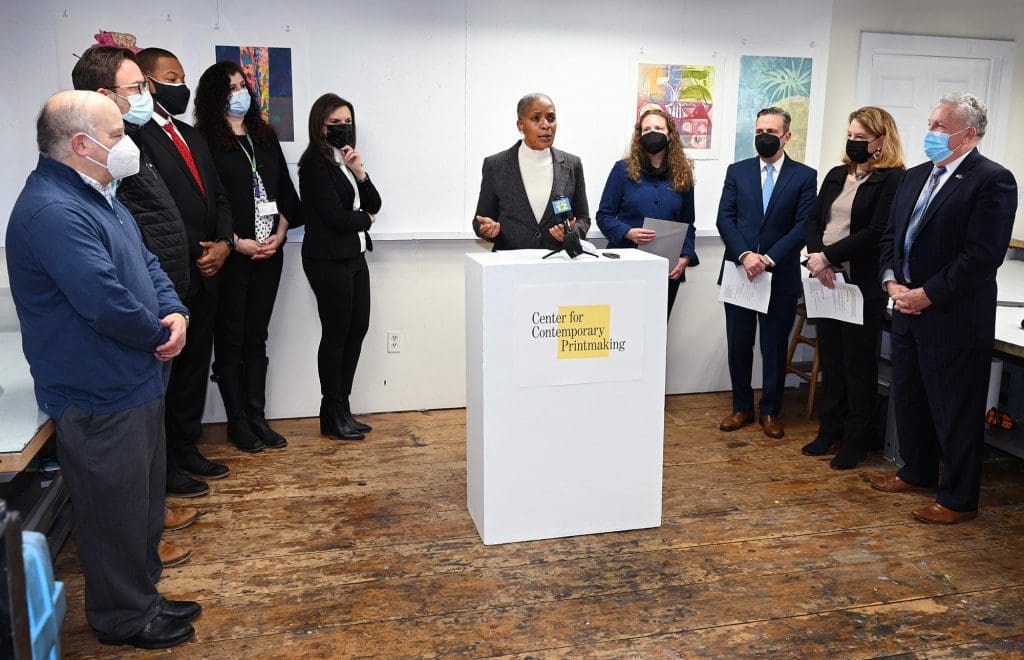 It’s true that no one is “officially allowed” to be on the Oak Hills Park golf course when it is closed, Oak Hills Park Authority Chairman Mike DePalma said last week, confirming that citizens are unable to go sledding on the golf course, as described by Paul Cantor in a letter to the editor.

DePalma wrote, “We have asked City Hall to meet with us to provide more guidance on this.  Per our by-laws, the Authority is technically in a lease agreement with the City, which I interpret to mean that decisions like this should come from City Hall, so I am trying to find the firm answer on this.”

He continued, “Personally, I am open to allowing people to sled on the course. I am adding a discussion item on this issue to the agenda of our monthly meeting so that we can gather input and hear ideas from all of the members and executive staff of the course. One of the ideas I brought up was potentially designating certain areas for sledding. Whether that’s realistic or not I don’t know, but I feel like this discussion should be had in an open meeting so it’s on the record and everyone has access to the information.”

DePalma confirmed a quote in Cantor’s letter, saying that it was Park General Manager Don Mastronardi who said, “NO taxpayer dollars go into the maintenance of the park.”

While Cantor pointed out that Norwalk taxpayers have funded loans to the Authority, which have had their interest rates slashed multiple times, DePalma said, “We don’t receive taxpayer dollars for any of our operational costs.”

Efficiency on the way

In July, the Common Council approved at $275,000 contract with Evergreen Solutions Inc. to conduct an “operations review and efficiency study.” The BoE was said to be paying $118,000 and the City paying $157,500.

“This is the first time we’re going to have a third-party firm reviewing our facts and figures and making sure that they’re informing us of those items that maybe we didn’t know,” then-Council President Nicholas Sacchinelli (D-At Large) said at the time. “So, I’m very optimistic of having something like this in place for the next budget cycle to be more informed than ever.”

The idea of an efficiency study first became public in February 2020 and was mentioned repeatedly during last year’s budget deliberations as a hoped-for avenue to avoid the financial “cliff” then-Norwalk Public Schools Chief Financial Officer Thomas Hamilton warned about. Some suggest that the study might result in cost savings that would help negate the impact of the increasing schools budget.

Norwalk Superintendent of Schools Alexandra Estrella has said that while the study could bring about a more efficient working relationship between the City and the school district, “it could go either way” as far as reducing costs goes, since it might also reveal areas where more staff is needed.

Dachowitz, on Jan. 13, said, “If there are a lot of changes after the mid-February discussions,” the public release might be delayed. But he was pleased, he said, that the Council should have the results in time for this year’s budget cycle. 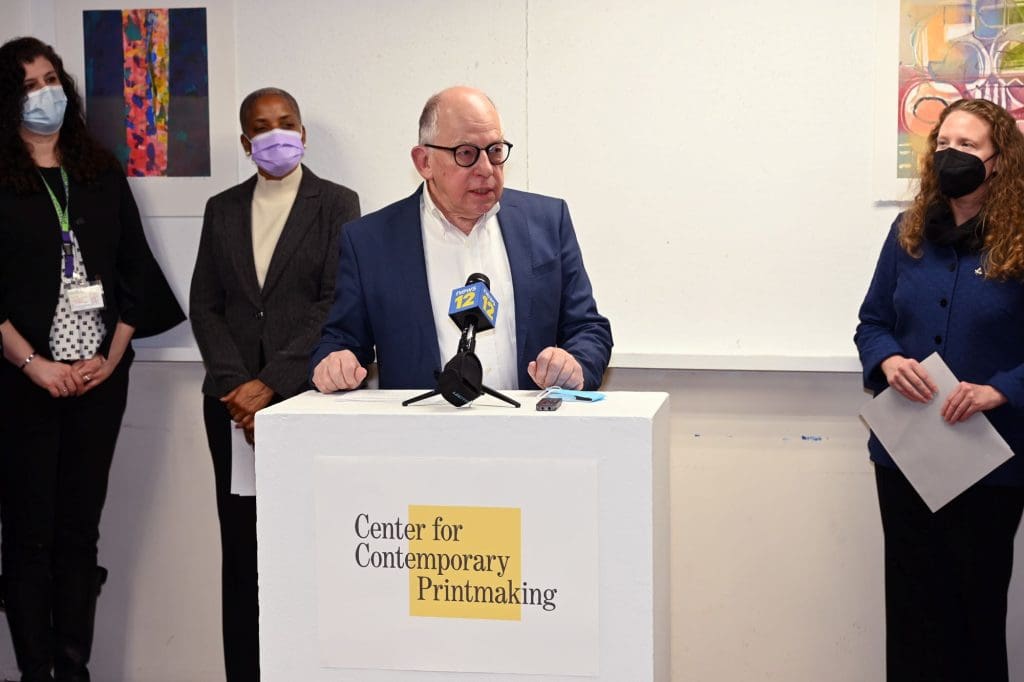 Thomas called this “an example of how government works” and spoke of “little things” that add up to money trickling down to where the community needs it. She had sent news of the opportunity to David Green of the Cultural Alliance of Fairfield County and to people she’d only met, and applications came in.

The grants represent “unrestricted funding” that “is an essential tool for organizations that often face restrictions from donors on how they can use their donations,” she said. “These operating support grants can literally help keep the lights on, pay for job posting, pay for professional development, or any number of things to help institutions keep their doors open during this challenging time.”

State Rep. Lucy Dathan (D-142) noted that $31,200 might not sound like a lot, but, “These are really important funds that do a lot … This organization offers internships and scholarships to many, and this grant money will be instrumental in ensuring that the Center for Contemporary printmaking continues to share the art of original prints and offers opportunities to aspiring artists all over Norwalk and beyond.”

According to a press release, the grants went to:

Green observed that of the $16 million distributed to 630 organizations statewide, “111 of those were in our 15-town area of coastal Fairfield County.”

“Six of the 21 recipients of these grants are right here in Matthews Park,” Green said. “… We have here a wonderful cultural center, we could say a cultural district, and I think many of us hope that the Norwalk City Council might be interested in passing cultural district legislation recognizing this and other areas of Norwalk as cultural and tourism destinations that pull people off I-95.”

“This is why people move here, this is why they stay here. This is why they raise their families here, because we have such great cultural institutions in our communities,” State Senate Majority Leader Bob Duff (D-25) said, telling Thomas that he was “thrilled” that “thanks to your emailing and your cajoling and everything else, (you) have gotten more people to apply for these funds.”

And, lastly, a response Duff received after urging the Darien Board of Education to reconsider its 5-4 vote to not allow Open Choice in the fall: 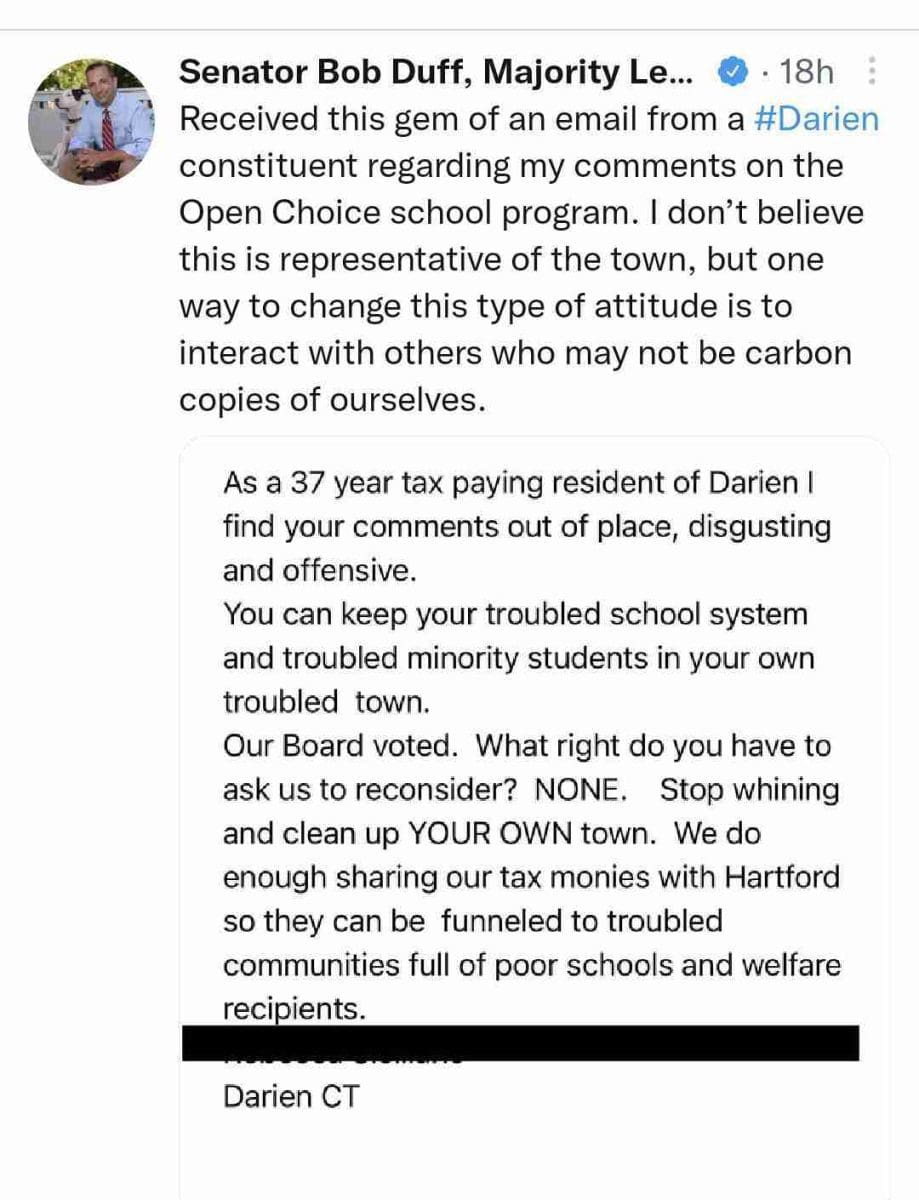 “Last legislative session we were proud to expand the successful Open Choice program to include Norwalk, opening the door for students to attend public schools in surrounding towns, including Darien,” Duff, State Sen. Will Haskell (D-26) and State Sen. Pat Billie Miller (D-27) said in their Thursday statement. “Open Choice is a win-win, allowing both urban and suburban students to gain exposure to new communities and experiences. Strengthening the understandings of diversity and inclusion among our young people cannot be done with just a mission statement. Diversity and inclusion are lived, not just promised. We call on the Darien Board of Education to reconsider their rejection of the Open Choice Program and do what is best for both Darien and Norwalk students.”

Sad sad sad, there’s been sledding ice skating cross country skiing long as I remember. I guess public isn’t so public welcome to the sad state we live in.

The sledding sounds fun…until someone is hurt and the course is sued.
What is wrong with Norwalk?
I played Oak Hills for the first time just before it closed for the season. What a gem!
The anti-golf zealots will do anything to shut it down, and that is sad.
Communities need recreation of all sorts, even sledding. At your own risk I will add.

While I believe Bob Duff to be the worse kind of opportunistic politician, and I’m sure he posted this letter for his own selfish reasons, I find this letter from a Darien resident to be incredibly ignorant and disgusting. Having been educated k-12 in Norwalk public schools, which opened the door for me to attend and matriculate from a top level national university, it is my belief that Norwalk is NOT in as much need of Darien, as Darien is in need of Norwalk. The Darien students are the ones who need and deserve this program even more than the Norwalk students. I am forever thankful and grateful for my education in Norwalk including at Brien McMahon. Any Darien student would have much to benefit by attending Brien McMahon, or any other Norwalk public school, as would the student body at Darien schools benefit from having Norwalk students attend Darien schools. I think most people, including the author of this repugnant letter, are looking at school choice the wrong way.

If we’re going to spend public monies on so called “efficiency studies” why not focus attention on the Red Flag – our failing public school performance ? Why not give our kids educations that meet CT Edu standards ? Its their lives here. Doesn’t that matter in Norwalk ?

Sunlight is the best disinfectant Bob. Share the name of this disgusting person who believes minorities are troubled. People should know who their neighbors are.

So no news on the multiple shootings on west cedar & price Ave.? That’s seriously concerning!!