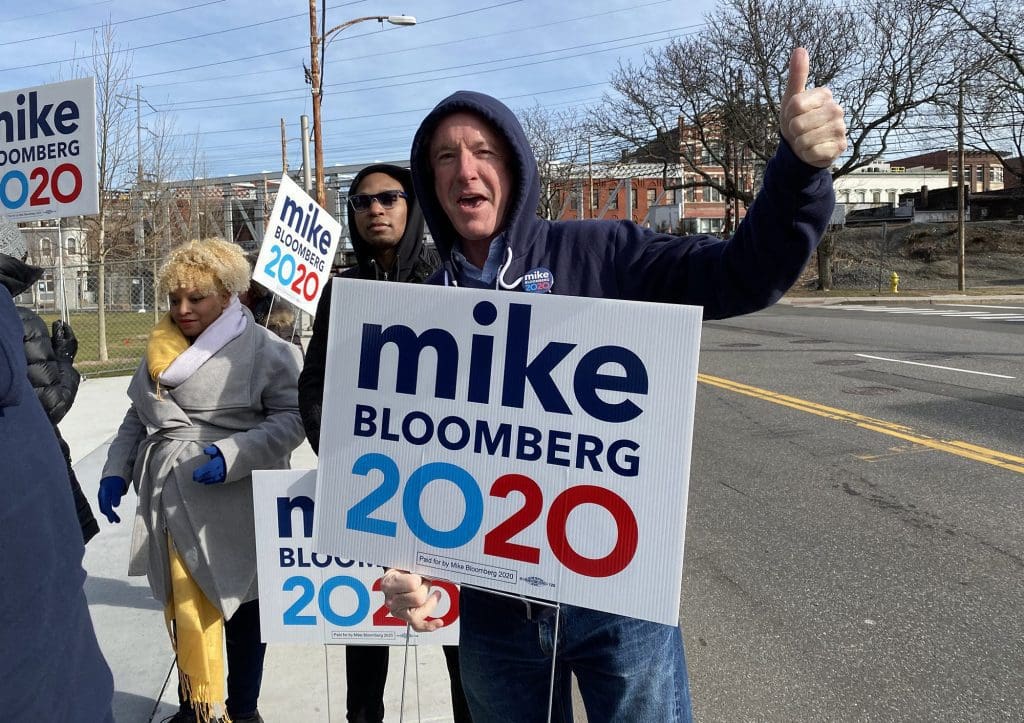 Central Norwalk residents have complained about traffic and pedestrian around the Town Green, Norwalk Senior Civil Engineer Mike Yeosock told the Norwalk Traffic Commission on Monday, explaining a request to lower the speed limits there.

The Commission went on to unanimously approve lowering the speed limit on Wall Street to 25 miles an hour, and also on East Avenue from Route 1 to the Interstate 95 interchange.

This will need Office of the State Traffic Administration (OSTA) approval.

The change will make the speed limit consistent all the way to the East Norwalk train station.

The speed limit varies on Wall Street and is on average 27 miles per hour, Yeosock reported.

“Cat’s outta the bag and the building…our time here in the Twin City Building is coming to a close. Our space has been sold and so with heavy hearts but cool heads we are here in the last weeks of Fat Cat on Wall Street,” Fat Cat Pie Co. announced Feb. 10 on Facebook.

The restaurant has since closed. Its space in the Twin City Build is said to have been sold; Town Clerk Rick McQuaid said Monday that no property transfer has been filed yet.

NancyOnNorwalk asked Norwalk Chief of Economic and Community Development Jessica Casey if her office has tried to help Fat Cat reopen in another Norwalk location. On Friday, she wrote:

“We have reached out a number of times, but have yet to be able to connect with Tony or Suzanne { Ancona}.

“{Director of Business Development & Tourism Sabrina Church} is extremely knowledgeable about available property, which is why we have been trying to connect. There are programs like the Federal Opportunity Zone that may be helpful for them. In addition, we launched a Storefront Improvement program that is a match funding program, which may be helpful for them if they were to open in a new Norwalk location (it is applicable City wide).

“More than anything we would love to connect with them to assist in any way we can to help them find a new location in Norwalk. They will be missed.”

“We are happy for the owners for realizing the sale of the restaurant space and wish the very best experience to the new owners,” Fat Cat wrote on Feb. 10. “This is our neighborhood in more ways than one and we will always be cheering it on. Where our Fat Cat is headed next is yet unknown, we’ll dwell in the possibilities for a while but for now we are already missing this space, the place, our team, our neighbors and YOU”

The restaurant was a Wall Street fixture for 16 years.

Connecticut’s primary election is April 28 and Secretary of the State Denise Merrill has released the names of the Democratic and Republican presidential candidates who will appear on the ballot.

“In an election cycle that started almost two years ago, we are finally in the home stretch,” Merrill is quoted as saying. “Although the deadline to switch from one party to another has passed, new voters and unaffiliated voters can go to myvote.ct.gov/register and register online by April 23rd, or go to their town hall to register in person by noon on April 27th. Connecticut voters will have many candidates to choose between in the April 28th primaries, all that is left to do is get out there and vote!”

Here are the Democratic candidates (listed in alphabetical order):

And the Republican candidates (listed in alphabetical order):

Other candidates can still get on the ballot by filing petitions with at least 1 percent of active registered voters of their party (7,979 for Democrats and 4,582 for Republicans), by 4 p.m. March 6. 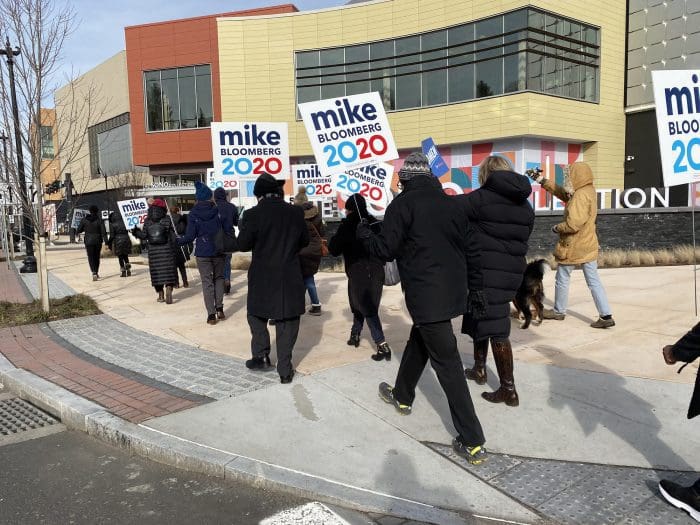 Mike Bloomberg supporters parade by The SoNo Collection on Feb. 15.

NancyOnNorwalk has received 32 press releases from the Mike Bloomberg 2020 campaign, since Jan. 28.

More than 100 supporters and elected officials joined the campaign Sunday as it opened its first Connecticut office in Milford, one said. “The campaign has plans to open nearly 9 more field offices in Connecticut over the next couple of weeks, with dozens of field staff already on the ground.”

Bloomberg has a “comprehensive plan to restructure our country’s criminal justice system,” said another, quoting former New Haven Mayor Toni Harp as saying, “our incarceration rate in this country is too high, and Mike has recognized that this is a real problem. There is a problem here and Mike has been able to recognize that and he is working to fix that problem.”

Bloomberg, former New York City Mayor, is worth about $61.9 billion, according to Forbes. He’s funding his own “blank check” campaign, in the words of Politico.

About 20 people recently marched in Norwalk, supporting Bloomberg, according to photos and videos released by the campaign.

“We need a president who has the vision and experience to unite our country and go to bat for residents on the issues that matter most to us,” Tevin Coleman, a Norwalker, is quoted as saying. “Mike Bloomberg is that candidate who can beat Donald Trump in November,  and deliver on his promises to the American people.”

Former Bridgeport Mayor Bill Fitch has endorsed Bloomberg as “someone who embodies the American Dream,” according to another press release.

“Mike’s father never made more than $6,000 a year. He paid his way through college, was unemployed at 39 years of age, and went on to create one of the most successful companies in our nation’s modern history. That entrepreneurial spirit, determination, and perseverance is what we need in our next President. That’s why I’m supporting Mike.”

“We need a leader with a vision and willingness to invest in the future of our country, and Mike Bloomberg is ready to do that,” said State Rep. Steinberg (D-136) in another press release. “Mike has shown that he has experience tackling big issues like climate change and public health, but he doesn’t want to just sit back on his track record. He is putting in the work to continue winning those big fights, and that’s the kind of person we need in the White House. I’m excited to support him in any way I can.”

Thank you Norwalk Traffic Commission ! The Norwalk Green Association and local residents greatly appreciate your support in addressing the unsustainable pedestrian safety situation on East Ave & East Wall Street. As one of Norwalk’s most densely populated and dynamic Neighborhoods, the proposal to reduce the Speed Limit around all of The Green is another very welcome measure towards improving the Safety & Walkability of this unique, iconic part of the City which serves as a Gateway to Wall Street and Downtown’s revival. Brad Craighead Norwalk Green Association

Why not a woman for President? This year 2020 is the 100th anniversary of women in this United States finally gaining the full right to vote. Yet, in all the talk of there being no minorities now in the presidential race, actually the women candidates are minorities in influence & appreciation. I have followed Elizabeth Warren as she advocated for fairer bankruptcy rules, called for the repeal of the 1994 crime bill, and, under President Obama, when she worked to set up the Consumer Financial Protection Bureau. The writer Alice Walker, known for The Color Purple, noted that she has experienced prejudice as an African-American, being judged a communist, being bi-sexual, being too proud. But, the worst prejudice Alice Walker has suffered was/is just being a woman. Have Faith in Elizabeth Warren: she is very smart, & she is open & kind!

Speeding is a problem all over Norwalk! I live in a residential area In Broad River/Silvermine area & it’s disgusting how delivery trucks, school busses & cars wanting to miss traffic lights on New Canaan Avenue speed down my street. The speed limit of 25 mph on a residential street is absurd! I’ve had large trucks including tractor trailers breezing up & down my street just to evade the traffic lights. Sometimes it’s almost impossible to get up or down the street with residents parked on the street. But there’s no point in reporting it because it won’t make a difference. Silvermine Avenue has cars parked in marked No Parking areas all the time & nothing gets done, high vehicle trucks, vans etc parking so as to block your vision if your coming out of a side street. Terrible that this is happening so often

“We have reached out a number of times, but have yet to be able to connect with Tony or Suzanne { Ancona}…..”.

Here’s some help. Turn left out of city hall. Turn left on Wall St. Park the car. Then knock on the door. Or maybe its quicker to walk there then try to find a parking spot that doesn’t cost $25 for 15 minutes. The weather makes for a nice 10 minute walk.

Excuse me. I forgot the 500 feet of East ave that separates the two buildings. Turn left out of city hall. Turn right onto East Ave. Then left on Wall.

Thank you, Mike Yeosock, Mayor Rilling, the Traffic Authority, and others for a logical remedy to speeding on Wall Street and East Avenue (known as “the Speedway”).

As a member of the Pedestrian Committee of the Bike-Walk Commission, I recently reviewed current heat-maps/crash data showing that these are the areas with the highest rates of pedestrian and bicycle accidents–people hit by cars. Both the Norwalk Green Association and Norwalk Citizens Traffic Safety Committee have been visible in asking City Hall to help with the traffic congestion and driver behavior.

In Norwalk, and our region, people drive too fast and very aggressively. These new, lower speed limits are a step in a good direction to slow down and enjoy the ride, and by extension, make our city friendlier and safer. Everyone, “Drive Mindfully”. In the end, it’s up each of us as to how we choose to drive and obey the laws that are in place to keep us all safe in a civilized society.

Fatcat couldnt afford the rent anymore. Thats why the restaurant was sold. They have a lovely wine shop on Knight Street. You can find them there. Originally a great business but with Colony Pizza around the corner it is tough to make it. Good luck to them

All aboard the Trump Train!!!

@ryan. Sadly you and all of us will pay dearly with our personal freedom once that Drumph Train wrecks, as it’s bound to do with all of us riding along. We all need to wake up fast or we will be locked down like Wuhan or worse. God Bless us, we need it. Oh and I miss Fat Cat already! And honestly I’m an East Ave speeder sometimes. Maybe a bike lane to slow down traffic?

Lowering the speed limit in Norwalk? Are you all crazy? I’ve never been around slower drivers in my life. And the traffic signals, please don’t even get me started how terrible they operate. Lastly, the sidewalks, IDK what city has their sidewalks the same color as the streets, but it’s a hazard and lazy. It’s painful driving around Norwalk.

Paul A you are correct if we elect another radical leftist we will crash..
Just look how well CT has done being run by the Democrat Party.

Paul A, don’t you find it in the least bit ironic that Sanders promises to do everything you feared with a Trump presidency, but didn’t happen? Maybe you’re intent on trying harder this time? And oh yeah, the Trump train is firmly on the tracks.

Don’t for a minute think that this past two weeks on Wall St. (the one that counts) has been somewhat about factoring in a Sanders candidacy. Wow, good times ahead, huh?