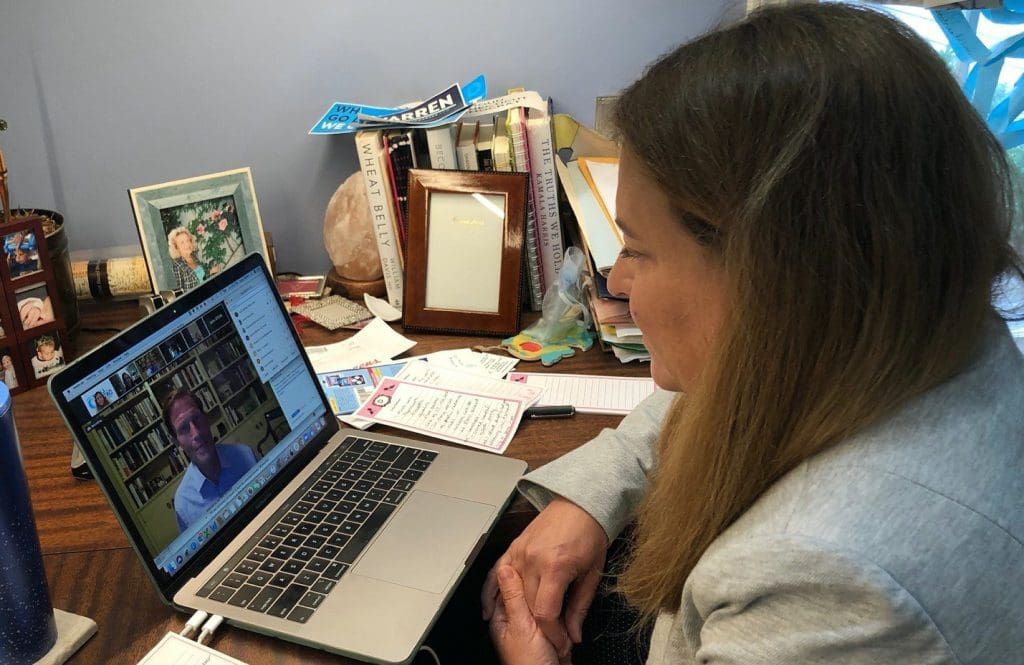 US Sen. Richard Blumenthal led off a round of endorsements from elected officials and community leaders, the release said. U.S. Rep. Jim Himes (D-Greenwich) appeared in a pre-recorded video.

Dathan is being challenged by former State Rep. Fred Wilms, a Republican who held the seat for two terms before being unseated by Dathan in 2018.

“Lucy is seeking to return to Hartford and bring her 25 plus years of finance and accounting experience to bear on the budgetary problems facing the state,” the press release said. “She is also eager to continue the critical work she began to improve the quality of life for the communities she represents from West Norwalk, to Brookside to Silvermine and New Canaan.”

Dathan believes that “every additional two-year term in the State Assembly builds upon the previous term exponentially,” it said. She has served on three committees: Appropriations, Human Services, and Insurance and Real Estate as well as several sub committees.

“My main reason for being on the call is to say how grateful I am to Lucy for the work she is doing, the kind of commitment it takes to do what she is doing, and how strongly I feel that she really needs to win this November… on the Democratic side.  What I have seen in the last three or four months is the epitome of Republican irresponsibility,” Blumenthal said. “… Lucy has an unbelievable work ethic, she never takes anything for granted, and as I say she really does so much good for people.”

“We know based on Lucy’s work in these last two years that she will fight hard in a fiscally responsible way for education, for good transportation, and of course for keeping our electoral system – our voting – safe and available to everybody,” Himes said. “I also want to say I have worked so closely with Lucy in the last three months in addressing the COVID-19 problem. She has been there every step of the way working to make it better, communicating with her constituents, and she absolutely deserves re-election in November.”

“Lucy’s campaign manager Alyssa MacKenzie concluded the event with an explanation of how the campaign was conducting its efforts during the Pandemic including a number of ‘touch-less’ opportunities,” the release said. “Alyssa is recruiting volunteers for virtual phone banks, letter and postcard writing and other tasks that can be done within the constraints of COVID-19 protocols and social distancing.”

“The regional travel advisory between Connecticut, New Jersey, and New York that went into effect last week and directs incoming travelers from states with a significant community spread of COVID-19 to self-quarantine for a 14-day period … now includes 8 additional states for a total of 16. The quarantine applies to any person arriving from a state with a positive test rate higher than 10 per 100,000 residents over a 7-day rolling average or a state with a 10 percent higher positivity rate over a 7-day rolling average,” Gov. Ned Lamont’s Tuesday coronavirus update said.

The states meeting the high-positivity criteria include:

Expect the list to be updated as the situation develops across the country. For more information on the travel advisory, click here.

“Within a week, the state’s travel advisory doubled as cases skyrocket in places like Florida and Texas,” Mayor Harry Rilling said in his evening update. “We are clearly seeing in real time what happens when guidelines are not followed and restrictions are too loose. I appreciate the public continuing to adhere to the public health guidelines because we do not want to experience a surge that we are seeing in many other states.”

There were no new COVID-19 results Tuesday in Norwalk, keeping the total at 2,081. One new death was reported, a person who was more than 80 years old.

“Thankfully, we have not seen a spike in cases in Norwalk or across the state during the Phase Two reopening. That is a credit to people following the guidelines, such as physically distancing and wearing a face covering,” Rilling said.

Connecticut’s 10-cent charge for plastic bags goes back into effect today, July 1, as will Norwalk’s Carry-Out Bag Ordinance, Rilling’s Tuesday coronavirus update said. “Businesses should no longer be using plastic bags in Norwalk, and must charge 10-cents for paper bags starting tomorrow. However, there will be a 30-day grace period on enforcement to allow businesses to use up existing supplies of plastic bags.”

It should be pointed out that Blumenthal and Jim Hines endorsed a convicted felon in the last mayoral election in Bridgeport. I’m not sure if their endorsement is anything to be proud of. That being said, Lucy is a good person. If it wasn’t for the last 40 years of Democrats destroying Connecticut fiscally, I’d probably vote for her.
Today’s American shout out goes to Benjamin O Johnson. Probably, one of the most unsung heroes in WW2. Ben, thank you all you’ve done. You deserve a spot next to Mother Cabrini in Heritage Park.