Stevenson won her party’s endorsement in its May convention but was challenged by competitor Michael Goldstein in the primary.

According to the Secretary of State, the tally was:

“We’d like to thank Dr. Goldstein and his supporters for participating in Connecticut’s Republican Primary. It is critical that we come together to ensure new leadership in November,” stated Campaign officials in a news release.

“Successful government leaders should draw from their personal values and professional experiences to truly understand, effectively advocate and take action for their constituents. People are longing for government that works to protect our safety and freedoms,” Stevenson is quoted as saying. “My opponent, Jim Himes, has been on the sidelines in Washington working hard for the Democrat party rather than working for the people he is supposed to represent in Connecticut.  We deserve better.”

She said, ““Global and national problems have found their way into the homes and lives of Connecticut residents – skyrocketing gas and food prices, crumbling infrastructure, escalating violent crimes, along with breakdowns and failures in mental health, in public safety, and in our schools.  In my 12 years of public service I have brought people together across the region and state to create solutions and build consensus on shared goals. As a municipal CEO, I worked to keep residents healthy, safe and to ensure a sustainable cost of living through responsible budgeting. I’m running for Congress to represent Connecticut with common sense, pragmatism, and an experienced steady voice in Washington.” 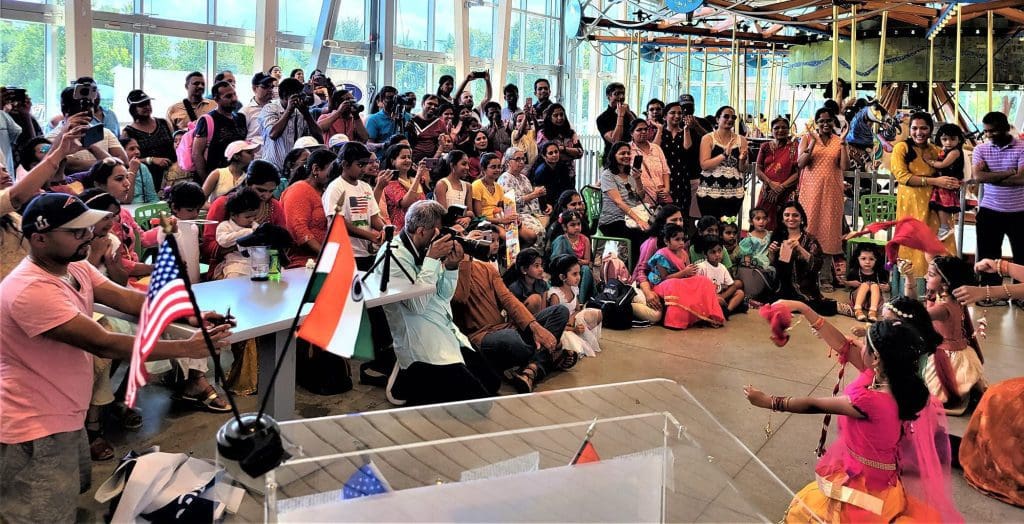 Dancers and part of the audience at Sunday’s India Day Festival, held in Mill River Park in Stamford. (Contributed)

Elected officials “joined hands with the Indian Diaspora in Connecticut for a celebration organized by the Connecticut Chapter of Global Organization of People of Indian Origin (GOPIO-CT),” the news release said.

More than 2,000 people reportedly attended the opening hoisting of American, Indian, and Connecticut flags at the Government Center in Stamford, and the India Festival that followed. A Connecticut General Assembly proclamation was read

“Through events like the India Festival, we are cultivating and developing community networking with all these younger elected officials,” GOPIO-CT Trustee/Advisor and Chairman of GOPIO International Dr. Thomas Abraham is quoted as saying.

“Dr. Abraham then introduced a young Indian American high school graduate from Norwalk Arnav Jhangiani, who spoke his perspective of what India’s independence means to him,” the release said. 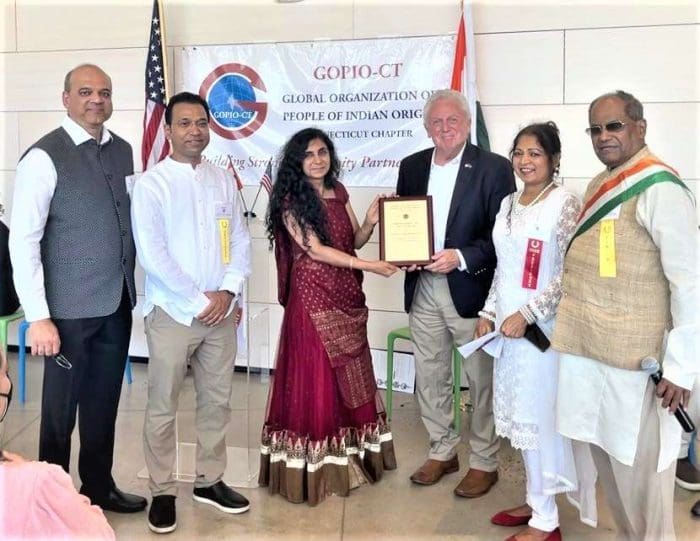 Norwalker Yashasvi Jhangiani received the Indian Independence Liberty Award from Rilling for her 12 years of service to GOPIO and for her contributions to the community at large.   An American Heart Association First Aid Program faculty member, Jhangiani is a volunteer EMT with both Westport Emergency Medical Services and Norwalk’s Emergency Response Team, and is a fundraiser for various community groups.

Young Sikhs are considering careers in law enforcement now that Connecticut General Assembly has passed Public Act 22-66, “An Act Allowing Police Officers To Wear Religious Head Coverings As Part Of A Police Uniform,” according to Mohinder Kalsi, a Norwalk engineer who testified in favor of the bill.

The bill allows police officers to wear a religious head covering in accordance with their religious beliefs while on duty, unless tight-fitting protective head gear is required.

The Bill was first introduced in 2021 but stalled, he said, crediting State Senate Majority Leader Bob Duff (D-25) for getting it passed.

“We are suggesting the young men and women come on the job, especially coming out of school,” Kalsi said.

In an email, he said, “This public act ended decades of discrimination in recruitment efforts in the Police Departments of the state of Connecticut.”