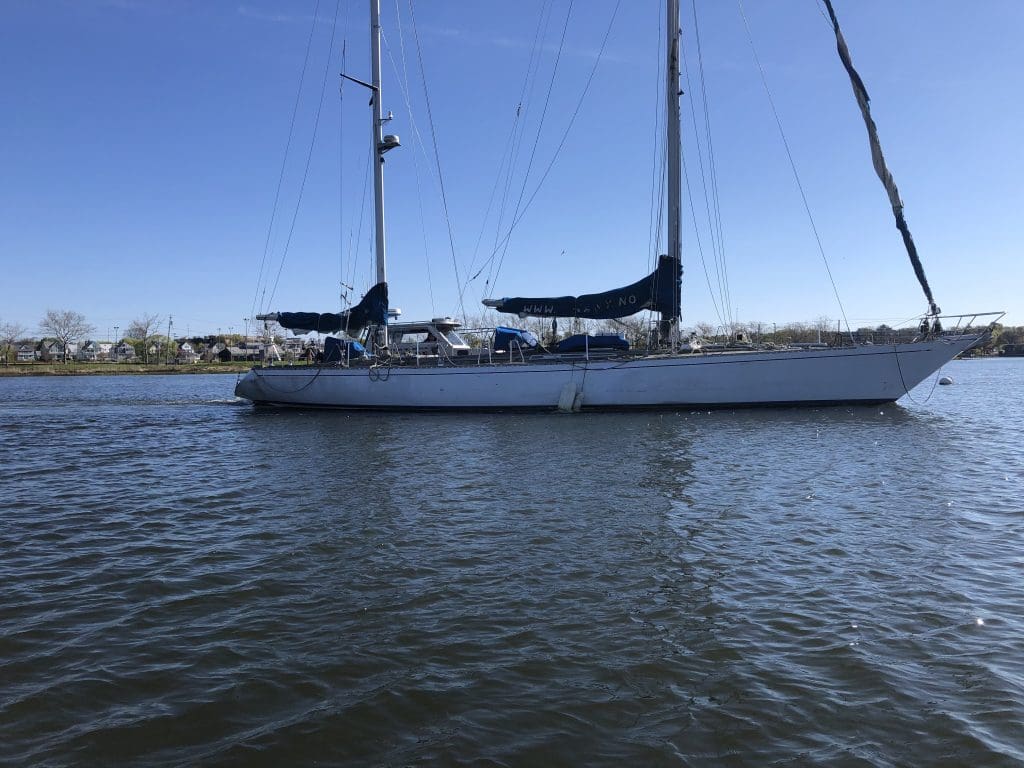 Swany, formerly owned by James Harding. “We are not interested in keeping his vessel ad infinitum,” Norwalk Deputy Corporation Counsel Jeffry Spahr said recently. “Our interest would be for HIM to take the vessel to someplace where HE has arranged for storage.”

Saturday was the deadline for James Harding to retrieve his 72-foot double masted sailboat, Swany, from the place the City put it, a mooring off Sheffield Island. He didn’t do it, according to Norwalk Deputy Corporation Counsel Jeffry Spahr, who recently said the boat would be swiftly put up for auction if Harding didn’t find it a new home.

Harding brought Swany to the Veterans Park visitor’s dock in early March, then didn’t heed requests from Norwalk Harbor Master Gregg Scully and the Norwalk Marine Police to find another home for it, as it was there without permission. Under state statutes, it’s been classified as an abandoned vessel.

This led Harding to ask, “Why is Norwalk stealing my yacht?” In June, after the City removed the boat ahead of Memorial Day weekend, he said he was talking to lawyers about the situation. Spahr said the boat would be auctioned off if Harding didn’t register it, pay his fines and find a place to moor the yacht, said to be too deep for the harbor.

Saturday was actually Harding’s second deadline. The Connecticut Department of Energy and Environmental Protection (DEEP) gave him an extra 30 days after he missed the first deadline.

So when is the auction? What will the minimum bid be? How much does Harding owe?

“I have none of those details,” Spahr said Monday. “It is a bit premature. The paperwork passing title to the City has to be official and then the City needs to bring it to a location to be held. From there, the process will play out.”

“Due to COVID-19, the City moved the camp experience online this month, with the second week of the Norwalk Adventure Clubs starting today,” Mayor Harry Rilling’s Monday coronavirus update said. “While in-person outdoor activities remains possible for August, the City designed free online activities for ages and interests. A list of classes, supplies to use at home, and more, can be found at norwalkct.org/recreationandparks.

There was an announcement Sunday on Facebook: Democratic Town Committee Chairwoman Eloisa Melendez said she’s in a relationship with Justin Papp, Hearst reporter.

Papp is described on the Hour’s website as a general assignment reporter, covering a variety of topics including arts and culture, education and housing. His bylines in recent weeks have been on state stories, not Norwalk politics. Many are focused on COVID-19 issues.

Reactions to the post from Melendez, who served on the Common Council for six years after being elected for her first term when she was 19 years old, included many good wishes.

“Nobody tells me anything!!! Call me and let’s have lunch!” one said.

At first was unsure why a romance was being reported, then realized it was a public official and media man. May have to keep an eye on the narrative Hearst reports behind their paywall

“Spahr said the boat would be auctioned off if Harding didn’t register it, pay his fines and find a place to moor the yacht,…”
Do the authorities suspect boater fraud? (Couldn’t resist.)