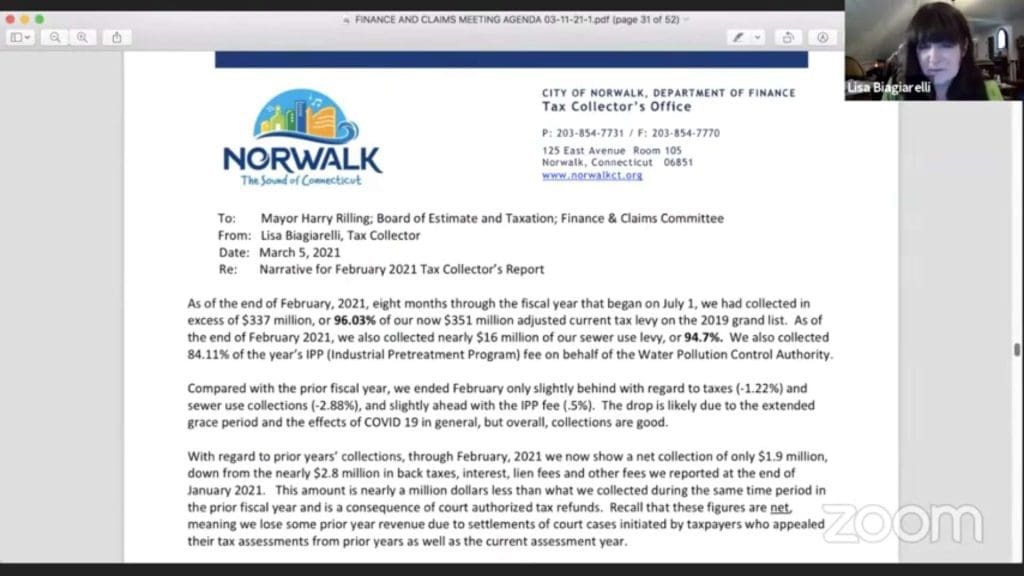 NORWALK, Conn. — Some Norwalk political tidbits for you:

The tax sale, delayed due to COVID-19, is scheduled for Aug. 16, Tax Collector Lisa Biagiarelli has told Common Council members last week. She had planned it for July but feels “we need more time” because the grace period on property tax bills is keeping her staff busy.

Taxpayers have until April 1 to pay their taxes.

“We have to wait really until after April 1 to do a lot of things that we normally would already be doing right now,” she said.

As for the sale itself, “I think it’ll be fine,” she said. “I think in terms of physical distancing, we’re able to do the sale like we usually do.”

“We have collected in excess of $3.6 million since November 2019 on properties originally slated for sale,” she said in a memo to the Council.

“That’s really wonderful considering that we’re in the middle of an extended grace period, and our taxpayers still have until April 1 to pay,” she said. “We’re really not very far behind at all. Less than one-and-a-quarter percent behind where we were last year.”

She’s planning to send a reminder to those who haven’t paid, she said.

In less positive news, the collections for the prior year are down due to court authorized tax refunds, she said in a memo to the Council. About $1.9 million has been collected “from the nearly $2.8 million in back taxes, interest, lien fees and other fees we reported at the end of January 2021. This amount is nearly a million dollars less than what we collected during the same time period in the prior fiscal year,” she wrote.

Council members recently approved $1.2 million refund to Waypointe due to a court decision. The Finance Department builds a reserve into the budget in anticipation of appeals, Norwalk Communications Manager Josh Morgan said in January.

It’s a $3 million reserve in this year’s budget, Norwalk Director of Management and Budgets Angela Fogel said in January.

Layoffs are the ‘last of last resorts’

Norwalk Board of Education Chairman Colin Hosten was asked Monday about possible layoffs in Norwalk Public Schools, due to budgetary constraints.

The BoE Finance Committee discussed a potential $2.5 million in budget cuts that could happen in response to the Common Council’s budget cap. Those include eliminating six teacher positions and six paraprofessionals, as well as a 10% reduction in high school sports and hits to the middle school sports program and music classes.

“All that was meant to do was to put into context what the current… allocation in the budget set by the Common Council, what that would or could translate to… just so everybody understands,” Hosten said to Democratic Town Committee members.

It was “just meant to literally translate what that money represents, but it’s an ongoing conversation,” and while layoffs are “on the table, there all the way the back of the table.”

Voting to replace a BoE member

Democrats are faced with replacing Barbara Meyer-Mitchell, who resigned last week from the Board of Education. Because she was an at-large member, all 55 DTC members will vote, Democratic Town Committee Chairwoman Eloisa Melendez said Monday.

Given that the term ends in November, the DTC will hold a special meeting March 30 to select the new BoE member, she said.

Melendez said she’s gotten three inquiries about the volunteer position and while “no one’s sent a letter out for intent, but I assume that we will have someone shortly.”

Kimmel: ‘I feel much better’

Meyer-Mitchell cited a need to look after her own two children as the reason for her resignation. Others BoE members who have recently resigned – Bruce Kimmel and Yvel Crevecoeur – have cited health concerns as their reasons.

Kimmel, who resigned less than a month after becoming Chairman and presiding over the most raucous City Hall meeting in recent memory, in late February got more specific. He wrote:

“As coincidence would have it, my breathing and general well-being took a drastic turn for the worse during the summer and early fall of 2019. My allergist and two pulmonologists had been treating me for asthma since around 2011, but nothing they did seemed to help. As I indicated when I stepped down, I was faced with a choice: increase my medication yet again or resign. I chose the latter.”

But things kept going downhill and on Dec. 31, “experiencing severe pain near my sternum” and “on the verge of dropping dead from a heart attack,” he was rushed to Danbury Hospital for an emergency catheterization and stent insertion.

“The procedure was a success; there was no damage to the heart; and today I feel much better than I have in years. The problem was never asthma; it was coronary artery disease,” he said.

His left anterior descending artery, called the widowmaker, had been 99% blocked, he said.

He also explained, “Back in 2019, when I said I had lost ‘confidence’ in the Mayor, I was not referring to any particular policy but to internal problems with the Norwalk Democratic organization that predate Mayor {Harry} Rilling and which nobody has been able to successfully address. I would rather not discuss these problem. BTW: I re-registered as a Democrat last year as the primary approached.”

Kimmel said he plans to endorse Rilling for reelection and, “I have no idea whether I will run for office.”

As a former employee of the Norwalk Board of Education, I would be against any cuts to it. Our son, David, ran track in middle & high schools here. Later he ran at Bates College in Maine, where his team was top in their division, even though he was only fourth-man. He said that he was happy to be that rather than first someplace else because his team was so good. Our daughter Grace lasted through 9th grade in the Norwalk system, but at Norwalk High School in 9th grade, she cut 25% of her classes & earned straight Ds. There was no help for her or us; we sent her to a private counselor. When she came home, I asked her how that went. “I told her nothing; it’s none of her business!” she replied. No local private school would accept her except St. Luke’s in New Canaan. Even it had to deny her any art class & suspend her several times at the start. Fortunately, there was no Wheels Bus to hop, & the principal & the whole smaller atmosphere was extremely caring. Our dear Gracie was helped to go to Alfred University in NY (she herself became a special-ed & later art teacher).
The year after I began work in Norwalk Public Schools as a Teacher’s Aide, my job & eight others were cut to save about $90,000. This put more work on the teachers. The next year, I was put into a Guidance Office. Because the machine that recorded the attendance would reliably work only for me & the NPS did not replace a secretary until absent for two weeks & there had been horrible illness that winter (our school was merely 3% away from being closed down-) & other personnel problems, I did not feel that I could go to my father’s funeral in Florida since I had a plane ticket for the next month when my mother would need some company, too. But, still, I regret not having been at my father’s funeral.
Politics does not have to be dirty, but it is dependent on those who speak out & who vote (there should be public financing of our Democratic-Republic). Norwalk is a diverse town. Our children benefitted greatly from having grown up here & having gone to Norwalk Public Schools.

Glad to see Dr. Kimmel recovering, which I sincerely take heart in, but it seems his heart issues may have adversely affected his brain? Maybe he should have been having drinks with the Mayor down the road, after he skipped out on the most embarrassing civic meeting in the history of the city where he ushered in the crazy behavior? Bruce for Mayor, stop kidding yourself or get on the Kydes campaign. This current one has to go NOW.

I’m glad to see Mr Kimmel was able to get the medical help he needed. Although he appears to be in good shape, heart disease is a big taker of life.