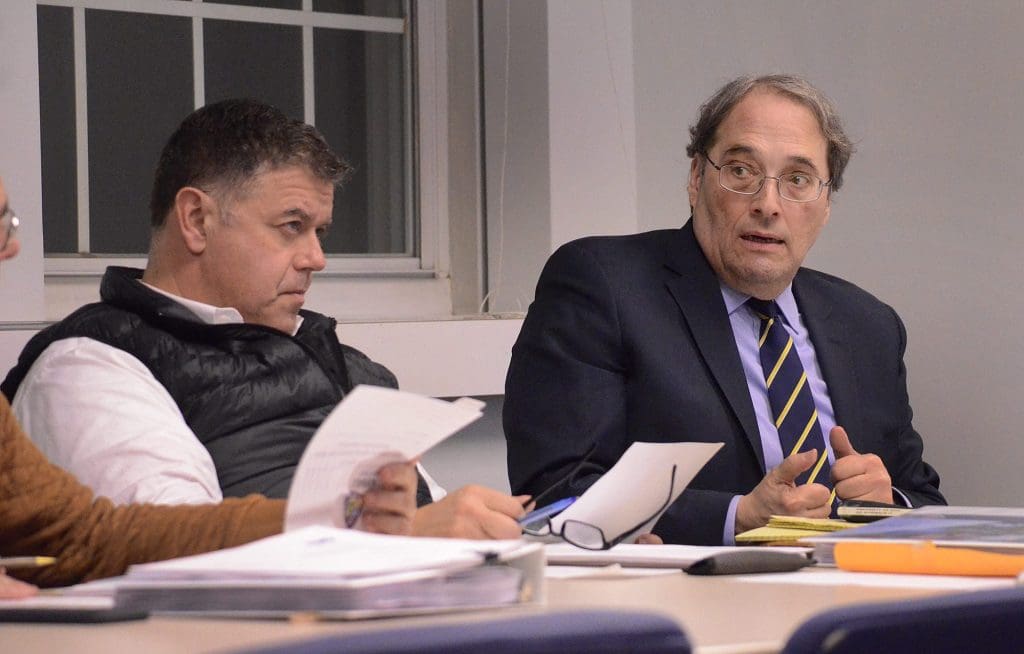 Norwalk
Chief Financial Officer Henry Dachowitz, right, at last week’s Board of Estimate and Taxation meeting. At left is BET member Artie Kassimis, a former Board of Education member.

The Common Council Finance Committee is holding a public hearing on the 2020-21 operating budget at 6:30 p.m. Thursday in the Council Chambers, located in City Hall at 125 East Ave.

The most contentious part of the budget is, of course, the Board of Education’s request for $219.5 million, a $18 million increase from what it was initially approved to spend in 2019-20.

The offer from Mayor Harry Rilling and Dachowitz of a $9.9 million increase is actually an offer for $8.9 million, given that Dachowitz is not including the $1.2 million special appropriation to cover the unexpected English Language Learner (ELL) influx, Meyer-Mitchell said Tuesday.

Hamilton calls this year’s budget request a 7 percent increase, because he factors in the special appropriation and carry over funds, while Dachowitz says it’s a 9 percent increase over what the City initially approved for 2019-20.

The ELL services are mandated by the state and it’s not like the children are going away, Meyer-Mitchell and Adamowski said.

Last year’s budget battle was marked by claims that it would be the last big increase requested by NPS. Then-Finance Committee Chairman Bruce Kimmel said this repeatedly and in January 2019, Barbis said, “We have this big ask this year …this really is the peak and it’s going to be declining.”

Hamilton had a chart projecting a “declining trend” of increases:

Norwalk has the biggest fund balance in the state, a $69.7 million Rainy Day Fund. Dachowitz has recommended an $8 million drawdown.

Dachowitz was thanked by both Common Council members and Board of Estimate and Taxation members for the information he provided in his budget presentation. BET member Troy Jellerette called two of Dachowitz’ slides “eye opening” and said, “I think you did a very good job.”

“This is exactly what I thought we should have been doing the last couple of years,” BET member James Frayer said. “… We were always really frustrated with the coordination that we got from the Board of Education.”

“Under the prior CFO, we would take just whatever the total balance was from last year’s approved budget and work from there and minimize the increases, not looking at the actual spending,” Frayer said.

Yes, Norwalk is getting an unexpected $527,000 through the State’s Educational Cost Sharing formula, Norwalk Superintendent of Schools Steven Adamowski said at Tuesday’s Board of Education meeting.

He’s going to make recommendations on how it should be used, after being rebuffed by Board of Education members on his suggestion that it be used to fund year-round schooling at Kendall Elementary and the expansion of the summer school program to include seventh graders.

Adamowski’s pitch involved technical explanations of what the money can be used for – it goes straight to the school district, not through the City, because when the legislature changed ECS formula it specified that’s what would happen in Alliance School Districts.

While Adamowski characterized the $527,000 as a pot of money that the City has no say over, BoE Finance Committee Chairwoman Barbara Meyer-Mitchell countered that it could be considered as basically covering inflation. She acknowledged that this is how former BoE Chairman Mike Barbis describes the change to ECS, which, in Adamowski’s words, “equalizes funds over a period of 10 years between the wealthiest districts in the neediest districts in the in the state.”

The Board voted not to go ahead with the Kendall plan and the summer school expansion, prompting Barbis to ask what the money would be used for, given that as Alliance funds there are state restrictions.

Meyer-Mitchell invited him to attend future Finance Committee meetings where the matter will be decided. Barbis is not a member of any Committee and is not able to cast votes at that level.

Since the State is very specific about what Alliance grants can be used for, the administration will make recommendations, Adamowski said.

He advised, “If you don’t like one set of recommendations, come back with another. But at that point I’m not going to be, you know, revolving door on this.”

Meyer Mitchell is projecting another 330 new students next year? I think we can all agree based on the last 5 years that you can take projections with a grain of salt. BUT, if her numbers are correct that means we will be welcoming another 330 ELL students into our school system. Where is the state support? Does anyone realize these ADD’L 330 students will cost approximately $ 5,000,000 PER YEAR to educate? Guessing Bobby Duff and our State Reps should get off their asses and bring home support for ELL crisis. Step up or Step out.

The BET needs to learn how to do its job and manage the city’s cash position, which it has abysmally failed at for the past few years. Overtaxing residents and underfunding departments and city needs is irresponsible. Allowing this cash hoard to reach this level is an abuse of taxpayers. The money should be refunded to taxpayers or invested in the city’s infrastructure (sidewalks anyone?). You could give each homeowner a $500 rebate and still have the most cash on hand for any municipality in the state.

Stop micromanaging departments and do your job. If you aren’t sure about what that is, read the charter. If you don’t like the fact we have a 9 member elected board (which the BET is not) that is responsible for micromanaging the school budget, then change the charter.